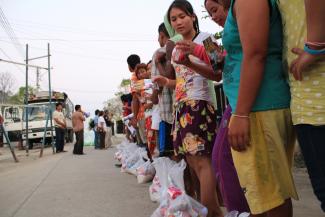 Human rights are measured through United Nations covenants and conventions. Regular State reviews monitor how the rights enshrined in these treaties are being implemented. The review of every nation offers a chance to educate citizens and demand realization of the rights enshrined in the treaties ratified by their governments. Indigenous Peoples’ involvement is essential to seek justice through the review process. In this series we aim to break down the core treaties.

The Convention sets minimum standards for migrant workers and members of their families, with a focus on eliminating the exploitation of workers in the migration process. The reporting cycle is an important process to ensure compliance of rights with international obligations under the core human rights conventions. The cycle creates a unique opportunity to assess the state of human rights protection within one’s own jurisdiction and to create a national plan for effective policymaking and implementation of the rights recognized in the Convention.

The Convention defines groups of migrant workers in specific categories: frontier, seasonal, self-employed, seafarer, and itinerant, and consists of nine parts: scope and definitions; non-discrimination with respect to rights; human rights of all migrants; other rights of migrants who are documented or in a regular situation; provisions applicable to particular categories of migrants; the promotion of sound, equitable, humane, and lawful conditions in connection with international migration; application of the convention; general provisions; and final provisions.

A 14-member committee serves as the main mechanism to monitor and measure States’ abilities to apply the articles of the Convention. The CMW reviews State reports and interacts with governmental delegations to enforce the rights in the Convention. Essential to the interaction at the international human rights level is the ability of advocates and activists to provide input during the reporting process to ensure the effectiveness of the Convention.

The initial report is due one year after a country ratifies the Convention. Periodic reports are due every five years and whenever requested by the CMW. These reports clarify the current situation and commitment to comply with the convention, and should cover the substantive CRMW articles as well as build on its constitutional and legal frameworks. The Committee encourages governments to use the Convention as a guide in administrative policymaking and legislative practices. There is a List of Issues Prior to Reporting (LOIPR) to guide the entire cycle, and the Concluding Observations to guarantee results before the beginning of the next review. The reporting process is centered around a conversation where the voices of the migrant workers and their families are heard.

The CMW was modified in April 2011. Now the Committee draws up a list of issues first, with the subsequent State report being a response. Civil society should still begin the reporting cycle with communities sharing their visions of fundamental freedoms relating to migration and how they want to realize rights. From these basic conversations, campaigns can be coordinated to generate pressure on States throughout the five phases of the reporting cycle. The people’s movement can shape the conversation by choosing the issues. There are two plenary sessions every year. The first takes place for two weeks in April, and the second for a week and a half in late August to early September. During each plenary session, the Committee examines initial and periodic reports. It will also adopt the LOIPR for other States coming up in next year for review. As with all treaty bodies, the Committee meetings all take place in Geneva, predominantly at the Palais Wilson.

There are a variety of ways for people to be heard at the plenary sessions, and it is important to be involved as early as possible in the process—up to 18 months prior to the State review. NGOs should present the information from the community and national level conversations to put people’s priorities as central concerns, and must be persistent in every phase of the process. It is vital for NGOs to participate with the Committee immediately prior to the consideration phase through the informal meetings and lunchtime briefing during the plenary sessions. It is also crucial to be available for any discussion regarding the drafting of the Concluding Observation recommendations. The International NGO Platform for the Migrant Workers Convention is an important partner in the implementation of the Convention.

The UN human rights treaty body process follows a similar pattern of the five phases for each State review: preparation, interaction, consideration, adoption, and implementation. The first and final phases are concentrated more in one’s community and country, where human rights matter most. The three middle phases are centered around the Committee process and the directly impacted individuals and communities.

The preparation phase is predominantly centered around engaging with one’s own community to understand the United Nations human rights instrument and institution. Civil society must educate people around the rights enshrined in the Convention and explain what the UN human rights mechanisms can and can’t do to realize these rights. The heart of the action in the preparation phase is examining the human rights record of the government under review, holding the State accountable and moving toward a campaign that can utilize the UN to change daily human rights conditions. It is an opportunity to influence state policies and practices to positively impact Indigenous Peoples’ daily lives and promote dignity, equality, and justice. The most important result of the preparation phase is the creation of an alternative report that supplements the State report and the LOIPR. It is advisable to coordinate the preparation phase at least 12–18 months prior to the review of the State.

The interaction phase consists of participation with the CMW to ensure that the issues, questions, and specific recommendations from the people’s conversations are understood and considered in the State review. It prepares the 14 Committee members, especially the Country Rapporteur, to be able to read through the government rhetoric and raise specific questions that capture the main challenges regarding current practices by policymakers and politicians. The core of this phase is initiation and building of relationships with Committee experts. Civil society’s purpose is to provide simplified documents for each article and the LOIPR in one to two pages. The documents are to be shared with Committee members to allow for more constructive dialogue. It is essential to attempt to engage with the State to partner for solutions. Recommendations should be targeted toward a country’s national policies and transformation of the current political model to achieve the articles of the Convention.

It is best to start the campaign 15–18 months in advance. NGOs can assist the Country Rapporteur to ensure questions and recommendations are featured prominently in the Concluding Observations. The interaction allows civil society to begin engagement at the plenary session one year prior to the review of the State. Civil society provides input from directly impacted individuals to Committee all the way up to the actual start of the review. The interaction phase intensifies one month prior to the plenary session with submission of a shadow report. It is also important to begin distributing the short summary sheets with Committee experts during this phase.

The consideration phase is where civil society’s earlier interactions result in an informed Committee speaking on behalf of a national human rights movement. The coordination of civil society should result in national recommendations that provide a roadmap to realizing rights for migrant workers and members of their families. NGOs should submit their shadow reports to the CMW and Secretariat three weeks prior to the plenary session.

The adoption phase is where recommendations are issued to the State based on the responses to the LOIPR, the shadow reports of NGOs, civil society briefings, and the interactive dialogue in the six-hour review of the State. At the adoption, the CMW releases its Concluding Observations, which provide a blueprint for a better approach to promoting and protecting human rights of migrants. ere is also mention of wide dissemination so there can be a national conversation on the results of the CMW that can generate conversations in government agencies and departments all the way to the grassroots communities throughout the country. It is vital to ensure the communities receive results of the campaign. The thematic working groups and national coalition must maintain its mobilization and create new connections to realize the recommendations in the Concluding Observations.

The final phase of implementation requires dedicated follow-up for fundamental rights and freedoms cited in the Concluding Observation announced at the adoption. The Concluding Observations create a blueprint highlighting the major concerns to build better policy, and also provides the next deadline for a national report, allowing all advocates to create a multi-year plan to realize human rights at home.