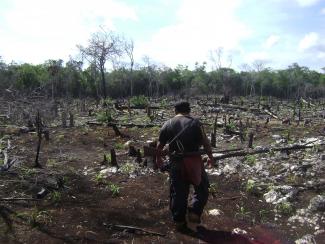 Tensions are brewing in the Máasewal communities of central Quintana Roo (known as Zona Maya) between those who want to continue the current system of ejido and those succumbing to the pressure to sell their ejido rights. Ejido was established during the Mexican Revolution as a system of communal land tenure that bestowed land rights to peasants and Indigenous groups.
Since 1994, individuals have been permitted to sell their land titles. Contributing to the community’s strain is the recently formed de facto partnership between one of Mexico’s wealthiest
couples and the United Nations program, Reducing Emissions from Deforestation and Forest Degradation (REDD+).

The program issues carbon credits that are intended to help mitigate the effects of climate change, but so far their primary effect has been increased privatization of land and disenfranchisement
of local Maya (the program imposes various compliance restrictions that dictate what they can do with their land in order to receive the credits). Additionally, Zona Maya is suffering from increased periods of drought associated with climate change. The drought inflicts enormous pressure on the community’s resources—the forest, wildlife, traditional agriculture—and is causing greater dependency on government subsidies. It is also resulting in migration to the “Riviera Maya,” where Maya are forced to seek work in the tourism industry that is often temporary and without benefits.

Faced with these difficulties, local leaders are questioning the prospects for future generations. As a people that have endured profound struggles, including invasion and war, the Maya tend to respond with an apocalyptic sentiment—one that has nothing to do with the 2012 doomsday prophecy nonsense perpetuated by the media—but much to do with a history of colonization and socioeconomic disenfranchisement.

A History of Conflict and Change
Most inhabitants of the Zona Maya are descendants of the rebel Cruzo’ob Maya who fought against Yucatecan elites during the Caste War from 1847-1901. Known for being fierce warriors, they kept Mexican capitalist extraction companies at bay until the Mexican army arrived in 1901. After the Mexican army took control of the region, it began constructing schools and other public institutions in order to quell the Mayas’ resistance. This was followed by a chicle (chewing gum) industry boom that opened the area to extensive forest exploitation. In the 1930s President Cárdenas implemented agrarian reform, and ejidos continued to be organized through the 1950s despite the fact that the Máasewal already had communal access to land.

In the 1970s, the Mexican government began to promote tourism as a tool for economic growth. Spearheaded by the creation of Cancún, today Quintana Roo is one of the fastest growing states in Mexico. The tourism industry profoundly transformed the coast between Cancún and Tulum by creating tourist spaces along virtually every beach and re-conceiving it as the “Riviera Maya” for promotional purposes. The tourism boom has had enormous repercussions on Máasewal communities as many have journeyed north to work, abandoning their milpas (cornfields) and prompting changes in the quality of their nutrition and their relationship with the environment.

By 1986, the landscape had been significantly altered again—this time by biodiversity conservation efforts, in particular the creation of the Sian Ka’an Biosphere Reserve. In principle, nature reserves are a positive response to the rapid decline of biodiversity caused by the global expansion of extractive capitalism. However, the implementation of these reserves has been problematic. Those with ejido lands surrounding the Biosphere were pressured by NGOs to participate in oft-ill conceived “alternative development projects” in the hopes of deterring them from their traditional agriculture practices, and instead generating income from the “sustainable use” of forest resources as defined by UNESCO. Such projects included organic agriculture, parrot husbandry, and the creation of ecotourism trails, rustic furniture, and crafts. However, funding for these projects frequently fell through and communities never realized the benefits.

Climate Change, Privatization, and Apocalyptic Visions
The Máasewal are directly experiencing changes in the environment. They are acutely perceptive of variation in the climate —particularly to rainfall—as agriculture on the Yucatan peninsula has always been difficult due to the lack of surface water. While acknowledging that life in the forest is never easy, many farmers attribute their declining yields to climate change. In addition to less rain, they see changes in the tree canopy and character of the soils. “A long time ago, between one and three hectares [of corn] would last all year; now we plant five or more and it doesn’t produce enough for the whole year,” says a farmer.

There are explanations for the Máasewals’ hardships that extend beyond climate change, however. Elder leaders see outside influences as an additional cause of many problems. One community remember recalled: “I remember when I was a little boy, my grandmother telling me that the huaches (white foreigners) were going to build a four-lane road and that would be the beginning of the end of the world.” This vision was retold in 2009 during the expansion of the Tulum-Felipe Carrillo Puerto road. While massive development has yet to reach Zona Maya, the highway’s expansion has opened the gates for unprecedented land privatization. Community leaders also point out the consequences of selling ejido rights, which they predict is “a signal of the end…[We] don’t know
if today, tomorrow, or in 10 years, but nevertheless, the end.”

Prophecies Fulfilled?
The concerns of the Tres Reyes ejido community are coming to fruition. Recently, ex-banker Roberto Hernández bought eight ejido rights. (Each ejido member has access to approximately 400 hectares of land.) While this is a large amount of land, most of the ejido is forest cover, and the traditional agricultural practice amounts to only a few hectares in production each year. In addition to what he purchased from these farmers, Hernández has acquired other ejido lands. The local press claims he used family members to buy the majority of the Pino Suarez ejido, south of Tulum; it is believed that Hernández intends to accumulate land in order to take advantage of newly devised economic programs for ecosystem services on protected lands. These programs will benefit
Hernández’s foundation at the expense of the local Maya and violate the spirit of REDD+, which declares that it “will require the full engagement and respect for the rights of Indigenous Peoples and other forest-dependent communities.”

Maya leaders worry that farmers will lose access to the land “that God has given us,” as they attest. By selling their ejido rights, they are conceding all future rights to land that has served as a safety net and cultural resource. Many Maya have worked in the tourist industry; in low seasons many returned and worked their land. If privatization continues, it will lead to further economic insecurity for the Masewalo’ob. Not all community members have succumbed to the promise of what they view as a lot of money, however. For many, life in the forest is a source of pride and a way to continue traditions. “I will never give up my rights. My tatich (grandfather) said that he who gives up his land, gives up his future. This is land for my grandchildren. Why would you give up the land of your grandchildren?”

— José E. Martínez-Reyes, Ph.D. is assistant professor of
anthropology at the University of Massachusetts Boston.

To read the extended version of this article, visit: goo.gl/2pi2G.