Clean vs. Dirty Energy: The Disregard of Indigenous Peoples in East Africa 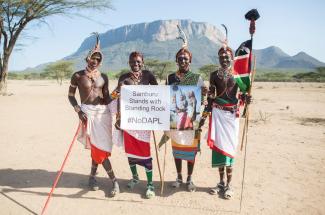 Over the past few years there has been a major investment boom in Africa, with a heavy push for oil and gas pipelines and other energy and infrastructure projects. In the rush for economic development, however, there has been little consideration of the negative environmental and human impacts of these large scale projects. African leaders support the recommended scaling up of infrastructure development and have called for the creation of the Programme for Infrastructure Development in Africa (PIDA) as the blueprint for the continent.

Since development policies and plans like Kenya Vision 2030, Tanzania Vision 2025, and African Union’s Agenda 2063 have gone into effect, the growth of public-private partnership has skyrocketed. Africa has been opened up for mega projects and businesses, leading to a “neo-scramble” for natural resources. Large deals between multinational corporations and national governments are being made and Indigenous Peoples are being left out of the conversation. In order for this investment boom to be sustainable and inclusive, it needs to take into account human rights and environmental issues as well as customary land use and Indigenous Peoples’ rights, which to a large extent has not been done.

The expansion of oil and gas pipelines across the region is having detrimental impacts on Indigenous communities. Projects like the Lamu Port-South Sudan-Ethiopia-Transport Corridor Project (LAPSSET), the Lake Turkana Wind Power Project, the KenGen geothermal project in Naivasha, and the Gibe Dams in Ethiopia put Indigenous Peoples at risk for a number of reasons, and the Indigenous Peoples’ voices and rights are not being respected as these projects progress. In most cases, the land where such projects are slated to take place has traditionally belonged to Indigenous Peoples who are now being forced off their lands and suffering from diminished or destroyed resources, reduced access to grazing pastures, lack of access to clean water and culturally sacred areas, and other rights violations. Indigenous people continue to lack meaningful compensation, and the companies behind these projects do not share the benefits equally with the Indigenous people they displace.

The Lamu Port Project is an East African flagship project, intended to provide transportation and logistics infrastructure and oil transport between the East African countries of Kenya, Ethiopia, and South Sudan, connecting a population of 160 million. Two pipelines will carry both crude and refined oil throughout the region. This mega development will cut across countless Indigenous communities, not only forcing Indigenous Peoples off their lands without compensation or their Free, Prior and Informed Consent (FPIC), but pushing them further into marginalized areas. Indigenous voices have not been heard, and the efforts the Kenyan government has made to address concerns pertaining to land tenure and conflict management are disrupted by corruption and policies that disfavor Indigenous rights and interests.

Lamu County in Kenya, an area crucial to the project, is home to the Bajun, Sanye, Orma, Awer, Mji Kenda, Pokomo, Somali, and Kikuyu Peoples, among others. Peoples such as the Awer have inhabited these areas for centuries, and are now being pushed off their homelands without FPIC processes and without sharing any of the benefits. The project also threatens the Tana River and Garissa counties that are home to the Orma, Wardei, Munyoyaya, and Somali pastoralist communities of Sanye and Awer hunter-gatherers, while Isiolo county is inhabited by the Borana, Samburu, Turkana, Somali, and Meru Peoples.

Other concerns include a lack of environmental impact assessment, lack of available information on the project, threats to traditional livelihoods, a threat to the World Heritage Site of Lamu Island, lack of clear benefit sharing mechanisms, and failure to recognize individual and community land rights. Although the Kenyan government has formed a central coordinating committee mandated to ensure that the concerns being raised by impacted communities will be addressed, including land tenure issues, no meetings so far have been at the community level.

One of the projects that worry many is the construction of a megadam in Laikipia along the Ewuaso Ngiro River. The dam will supply water to one of the proposed resort cities along the Lamu corridor in Isiolo County. The government has not disclosed how many people will be displaced by the dam and the proposed city, nor has it engaged anyone about relocation and land compensation. Damming of the river, which is the only source of water for thousands of pastoralists in the semi-arid region, will have far reaching repercussions on livelihoods of many, including wildlife.

With support of the World Bank, Kenya has also been engaging in extensive geothermal extraction on Maasai territory in Kenya. The projects that have been implemented have raised major concerns of lack of proper protocols for community involvement, irregular and skewed compensation for communities, and forceful evictions of local communities that live within project sites. These issues have been confirmed through an initial investigative report by the World Bank Inspection Panel, which visited the general area to validate complaints that were lodged by the Maasai community. According to one community leader in Longonot, Kenya, “This company has been a threat to our existence. We have experienced evictions, threats, loss of land, and other human rights violations. Now, their activities have turned to destroy our livelihood. This follows a continuous flow of sludge into a valley which is the only source of water for both human and livestock.’’

The community has tested their water, which has turned into a smelly black sludge, and found that the levels of suspended Biochemical Oxygen Demand are above the National Environmental Management standards for effluent discharge to the particular environment. The contaminated water has been associated with the death of several livestock, which are the main source of livelihoods for the local Maasai community. In Naivasha, a Maasai child drowned in one of the industrial wastewater disposal ponds that was left unprotected. The Maasai are requesting that safeguard protocols are observed before any funding of such projects is done. They are equally appealing that authentic participation is undertaken with approaches that will ensure sustainable livelihoods of the affected people. Geothermal energy is clean energy, but the reality is the pipes are bursting, hot water is spilling in the villages, and children play around the hot pipes and are getting injured. Communities have been chased away with little or no compensation.

Kenya’s largest private investment to date, the Lake Turkana Wind Power project, consists of 365 wind turbines covering 40,000 acres of land in northern Kenya, which was given away without public consultation and without obtaining FPIC of the Indigenous Peoples in the area. In 2006, a consortium made up of four private companies and three state-run development funds arranged a lease of an additional 150,000 acres of land and resettled a small village. According to the consortium, the only Indigenous Peoples in the project area are the El Molo. The three other local Tribes, Rendille, Samburu, and Turkana, are not recognized by the consortium as Indigenous, even though they are recognized by the African Commission on Human and Peoples Rights. There is a pending court case over illegal land acquisition, but construction has occurred despite local opposition.

Several organizations, entrepreneurs, wildlife conservancies, and land owners in the Samburu region such as IMPACT, Samburu Women’s Trust, and Pastoralist Development Network Kenya, Save Lamu, and Friends of Lake Turkana are mobilizing to counter the impact of the Lamu project on their communities. Turkana County has protested the initial testing of Tullow Petrol and is demanding benefit sharing and compensation. In Sarima, protests have also taken place regarding the Lake Turkana Wind Project. In a court case in process in Meru, an injunction was issued over the construction of the last six turbines. Armed with knowledge about environmental impact assessments and Free, Prior and Informed Consent, Indigenous people are demanding their rights.

The Samburu of Kenya show solidarity with #NODAPL while facing a massive development project across their lands. LAPSSET contemplates the construction of two oil pipelines, a highway and railway, a dam, three international airports, three resort cities, and a seaport. Photo by Julia Cumes/Samburu Watch.

The investment boom in Africa is funding mega energy projects like oil and gas pipelines and dams that are largely disregarding Indigenous Peoples’ rights.