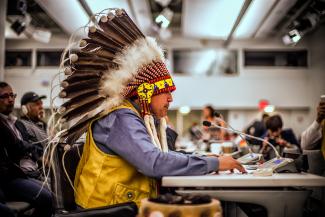 Chief Perry Bellegarde (Saskatchewan Regional Chief for the Assembly of First Nations and Chief of the Federation of Saskatchewan Indian Nations):

"Yesterday, Canada was the only state to provide an Explanation of Vote, stating that it would formally submit its position regarding the UN Declaration and its concerns with a few paragraphs in the Outcome Document. In this  written position, Canada contradicted its own 2010 endorsement of the United Nations Declaration on the Rights of Indigenous Peoples. In its endorsement, the government ultimately concluded: “We are now confident that Canada can interpret the principles expressed in the Declaration in a manner that is consistent with our Constitution and legal framework.” Yesterday, as a written position, Canada omitted the above key conclusion. This is bad faith. Canada has misled the General Assembly, member States, and Indigenous Peoples globally. Canada’s actions undermine human rights, good governance, and the rule of law at the international and national level. This is not the way to engage in human rights and foreign affairs at the United Nations. And I do not accept this.

Canada Interprets Free, Prior and Informed Consent as Only consultation—Not Consent

This is incorrect. In the Tsilhqot’in Nation Supreme Court of Canada decision, Canada’s Supreme Court used the term “consent” in nine paragraphs and the “right to control” the land in eleven paragraphs. The Court added that the “right to control” means “consent” must be obtained from Aboriginal titleholders. It is wrong for Canada to claim that Paragraph 3 of the Outcome Document, which reflects Free, Prior and Informed Consent in the Declaration, would “run counter to Canada’s Constitution.” Canada cannot disregard the rulings of its own highest Court.

I am here at the UN World Conference on Indigenous Peoples to work for a tomorrow where this is not the status quo. I welcome all opportunities to work in cooperation with Canada on the full and effective implementation of the UN Declaration on the Rights of Indigenous Peoples, affirming and protecting our human rights, our inherent and Aboriginal rights, our Treaty rights, and our collective rights for present and future generations."

Listen to these interviews in their entirety and more atsoundcloud.com/culturalsurvival.To read the WCIP Outcome Document, visit: goo.gl/slPnlw.