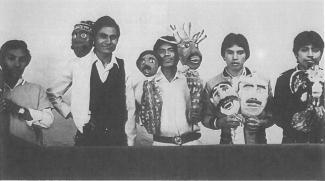 Each morning at sunrise Mariano Lopez Mendez finishes his breakfast of tortillas and beans, says goodbye to his wife, Rosa Bak Bolom (Rose Thin Jaguar), and their six small children in his home in the remote hamlet of Petej in the highlands of Chiapas, and walks two and one-half hours on a mountain trail that leads to San Cristobal Las Casas where he works as the Coordinator of the Writers' Cooperative, beginning each day at 9 a.m. On sunny days Mariano rides his bicycle, and the morning trip is only one hour downhill, but the bone-jarring experience of maneuvering a bicycle over the trails and the washboard surface of the gravel road descending into the valley of San Cristobal would lead lesser men to turn back in despair. Moreover, he then has to push the bicycle uphill two and a half hours to reach home by sundown. If it is pouring rain, Mariano walks an hour to Chamula Center to catch a truck or bus which in a half hour reaches San Cristobal over the longer paved road, but costs him 30 pesos, a sum he can ill afford from his small daily pay of 725 pesos (about $3.25 in US dollars).

Petej is one of the scattered settlements that make up the municipality of Chamula, a Tzotzil-speaking community of over 50,000 contemporary Maya Indians. Southwest of Chamula lies Zinacantan, another Tzotzil-speaking community of almost 20,000 Maya Indians. To the east lies Tenejapa, a Tzeltal-speaking community of 25,000. Members of all three of these communities are presently working for the Writers' Cooperative. There are a total of 34 municipalities in the highlands of Chiapas with Indian populations who speak either Tzotzil or Tzeltal (these two languages being related to one another in grammar and vocabulary almost as closely as Spanish is related to French) and having a total Mayan population of over a quarter of a million.

While the Tzotzil-Tzeltal were conquered by the Spanish and converted to Catholicism in 1524, they still speak a Mayan language, with Spanish being quite secondary. They also retain much of the richness of the ancient Mayan culture in their ways of farming maize, organizing their social life, and practicing their religion based upon traditional cosmological concepts. But while their ancient Maya ancestors had a written language in hieroglyphics painted in bark books (codices) and carved in stone at famous sites, such as Palenque which is only 75 miles from Chamula and Zinacantan, the contemporary Chiapas Indians can read and write in limited Spanish, if at all.

The purpose of the Chiapas Writers' Cooperative is to revive what was lost during the Spanish Conquest, that is, the ability to read and write in the language in which the Indian people live, think, and do most of their daily business.

The older two members of the Cooperative, Mariano Lopez Mendez of Chamula and Anselmo Perez Perez of Zinacantan, learned to read and write in Tzotzil when they were employed as transcribers, translators, and anthropological consultants by the Harvard Chiapas Project during the 1960s and 1970s. A younger member, Juan de la Torre Lopez, is the eldest son of Domingo de la Torre who worked for the Harvard Chiapas Project for many years before his death in 1976. The others, Domingo Heredia Hernandez of Chamula and Sebastian Ramirez Intzin of Tenejapa, have been recruited recently.

The idea of the Writers' Cooperative was a brainchild of John N. Burstein (Harvard '73) and Robert M. Laughlin (Harvard PhD 1963), both of whom had engaged in many seasons of field research on the Harvard Chiapas Project and were fluent in Tzotzil. Burstein and Laughlin were responding to comments of our informants following a 1982 conference in San Cristobal Las Casas to celebrate 40 years of anthropological research in Chiapas. Our former informants were telling us that we anthropologists had aroused their interest and self-consciousness about their own culture, but that while we had presumably made good studies, we had taken our knowledge away with us. They added that the younger generation of Tzotzil-Tzeltal Mayas are now widely literate in Spanish, but increasingly ignorant about their own culture which is rapidly slipping away. The informants expressed a deep desire to at least record their customs on paper before they disappear entirely. The Writers' Cooperative was launched soon thereafter, and when Burstein left Chiapas for Nepal, Laughlin, who is noted for his distinguished scholarly work on the Tzotzil language, has carried on as the principal advisor of the Writers' Cooperative.

In January 1985, I found the members of the Cooperative hard at work in a small office they had arranged to use at La Cabaña, the headquarters of the Institute Nacional Indigenista (National Indian Institute) on the outskirts of San Cristobal. The writers had recently moved to this office because it is rent-free and provides a sunny and pleasant work space.

They were busily writing texts in Tzotzil with Spanish translations that are published by the Secretaria de Educacion y Cultura (Department of Education and Culture) of the Chiapas state government. Most of the writers have learned to touch-type, so their composing is done directly on the typewriter. The others write longhand. Lively figures to illustrate the texts are drawn by Mariano Lopez Mendez.

They proudly showed me their publication output to date which includes five issues of an illustrated magazine written in Tzotzil and Spanish that cover the following topics:

1. El Primer Soldado Llego a Chamula (The First Soldier Arrived in Chamula), 1983. An account of the Spanish Conquest.

2. Historia Antiqua de Zinacantan (Ancient History of Zinacantan), 1983. Accounts of the arrival of the Aztec merchants in Zinacantan in the 15th Century and of the Spanish friars in the 16th Century, as well as a chapter on life and customs of the Zinacantecos.

3. Palabras de Los Ancianos (Words from the Elders), 1983. A collection of folk tales from Tenejapa in Tzeltal.

4. El Cuento de Sipakna (The Story of the Strong Man), 1984. Two folk tales from the famous Popul Vuh of the Quiche Maya of highland Guatemala.

5. Los Antiques Comerciantes Zinacantecos (The Ancient Zinacanteco Merchants), 1984. A legend about the adventures of the ancient merchants of Zinacantan.

The writers described to me the way in which the magazine is distributed free to school children in the municipal centers and hamlets of Chamula, Zinacantan, and Tenejapa. The procedure is to give one copy to each student and explain in Tzotzil or Tzeltal what they are and how the children should take them home to read them to themselves and to family members. Mariano reported that the schoolteachers who come from Indian backgrounds and are bilingual in Tzotzil or Tzeltal and Spanish are enthusiastic about the magazine and encourage the students to read them. But the schoolteachers who come from ladino (Hispanic) backgrounds and are monolingual in Spanish dislike the magazine because they think it distracts from their efforts to teach the students to read and write in Spanish. This impression accords with my interviews with teachers of the two backgrounds in several hamlet schools.

My interviews in January also indicate that there have been some problems in distribution reflecting the political factions in Indian communities. For example, one member of the Writers' Cooperative has been an active leader in the opposition party PAN (Partido Accion Nacional, or "National Action Party") in Zinacantan; hence political leaders in hamlets that consider themselves to be members of the official party, PRI (Partido Revolucionario Institucional, or "Institutional Revolutionary Party") reject the magazine because they think it is published by the opposition party!

More recently the writers have developed a puppet show which is performed at hamlet schools. The show is designed to appeal directly to the children and their parents by explaining the purpose of the bilingual illustrated magazine and showing how both the parents and children can learn to read in Tzotzil and Tzeltal to gain more knowledge about their own legends and customs. It is still too early to tell how effective this puppet show will be in encouraging the distribution and reading of the magazine, but hopefully the puppet approach will help avoid some of the resistance of the monolingual teachers and persuade the people that the Writers' Cooperative and their work is apolitical and in no way threatens the aspirations of either the official or the opposition party in the Tzotzil and Tzeltal communities of the highlands of Chiapas.

In April and May 1985 the puppet show made a short, but successful, tour in the United States with performances in Cambridge, Massachusetts, at the State University of New York in Albany, and at Cornell University. The show is now back in the highlands of Chiapas playing in the scattered mountain hamlets.

During the last three decades I have personally witnessed a vast improvement in the morale of the highland Chiapas Indians. When I began field research in Chiapas in the 1950s the economic, political, and social oppression of the Indians was notable, and the consequent morale of Indian communities was at a low ebb. One index of this low morale was the excessive consumption of alcohol in the form of aguardiente (cheap sugar cane rum); one observed drunks by the hundreds at the large annual fiestas in the ceremonial centers.

In the 1950s the Institute Nacional Indigenista (hereinafter INI), founded by Mexico's foremost anthropologist, the late Dr. Alfonso Caso, began to work in the highlands of Chiapas. In subsequent years, other federal and state agencies also began to institute programs to aid oppressed Indian communities. The programs that were instituted included a spectrum of development projects, ranging from improved breeds of chickens to the training of bilingual Indian teachers (called "Cultural Promoters") for the schools. There has been much debate in Mexico and elsewhere about the success or failure of these programs. In perspective, it seems to me that although many of the programs failed or were of only limited success, the long-range effect of INI and its successors has been a vast improvement in Indian morale. The important thing was that for the first time in 400 years of oppression an official agency of the Mexican government appeared, saying, "We are here to help Indians." As a result, Indians began to acquire a sense of pride in their own identity; they also slowly learned during the past thirty years how to be politically effective with government officials, how to borrow money from banks for economic enterprises, and how to purchase and drive trucks and buses.

As of 1985, one sure sign of this improved morale is that one can attend a major fiesta in Chamula or Zinacantan and find only a handful of drunks. At the principal Zinacanteco winter fiesta of San Sebastian this last January there were an estimated 5000 Indians in attendance and I did not observe more than half a dozen drunks! This is an extraordinary development; in fact, it may be one of the few cases in the New World in which an American Indian population has managed to bring the excessive consumption of alcohol under control.

The Chiapas Writers' Cooperative hopes that its program of literacy in Tzotzil and Tzeltal will be a major step in further increasing the sense of Indian identity and pride in their own cultural background and contemporary customs. Perhaps an important creative literary tradition may even grow from these modest beginnings in San Cristobal Las Cases - if only sufficient funds are forthcoming to support the cause!