Where the Green Ants Dream

Where the Green Ants Dream, Werner Herzog's latest film, tries to be both a poetic tribute to aboriginal culture and a desperate warning signal to "wreckers" from the West, but ends up falling over its own romanticism. The aborigines end up looking quaint, while the Westerners look like thugs and fools. The story is simple.

People should develop along the lines of their genius and should avoid imposing anything on them. We should try to encourage in every way their own traditional arts and culture...We should try to train and build up a team of their own people to do the work of administration and development. Some technical personnel from outside will no doubt be needed, especially in the beginning.

Time For Change In South Africa

The latest round of protests in South Africa may result in fundamental changes in its system of apartheid. For the first time, conservative businessmen and banned African National Congress (ANC) leaders are talking. Their talks have proceeded because the South African economy is more fragile than the business community had thought.

The Taman Negara Batek - A People in Transition

Batek Negritos from the vicinity of Taman Negara National Park in West Malaysia are a hunting and gathering people presently experiencing rapid encroachment by the modern world. Under the authority of the Malaysian government, they are being encouraged to settle and to emulate Malay subsistence farming communities.

The Situation in Chad

Chad is the fifth largest country in Africa, twice as big as Texas, with suffering to match its size. For twenty years it has been torn by a persistent civil war between the Middle East-oriented northern regions of the country and the African southern areas. Economically, it has been drained by drought and famine that leave it a veritable "basket case."

The Price of Autonomy - CRIC in Colombia

Most Indians in the Americas share the same status as poor, non-Indian peasants. Many Indian organizations openly recognize the similarities between the two groups, often act in solidarity with peasants and other members of the working class, and occasionally collaborate in popular, political movements.

The Islamic Revolution and the Lutis of Iran

Prior to the Islamic Revolution, the Lutis of Luristan, southwest Iran, largely earned their income as entertainers. They performed at wedding celebrations, as well as at circumcision ceremonies and the New Year (Now Ruz) festivities. 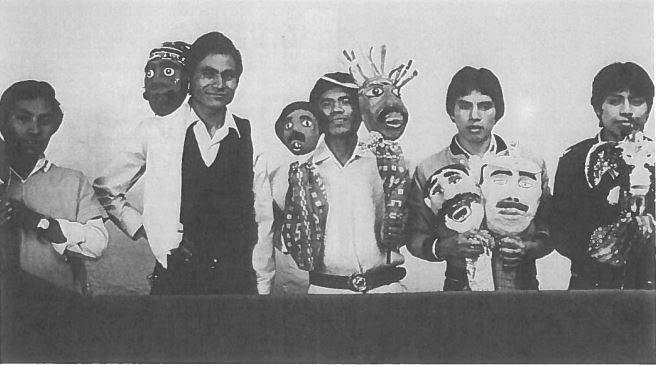 Each morning at sunrise Mariano Lopez Mendez finishes his breakfast of tortillas and beans, says goodbye to his wife, Rosa Bak Bolom (Rose Thin Jaguar), and their six small children in his home in the remote hamlet of Petej in the highlands of Chiapas, and walks two and one-half hours on a mountain trail that leads to San Cristobal Las Casas where he works as the Coordinator of the Writers' Coo

The translation that follows is from one of a number of booklets written in a native language and Spanish by the Chiapas Writers Cooperative. The oral tales presented in the booklets are printed with the assistance of the Mexican Ministry of Education. The initial distribution of the publications to the native communities is preceded by a puppet show which enacts the written story.

When Nigerians won political independence from Great Britain in 1960, they adopted its parliamentary form of political representation. But Nigeria's First Republic was markedly unstable, marred by power-grabbing, corruption and, in the end, the civil unrest was only quelled by a military coup d'etat in 1966.

Political Development Among the Basarwa of Botswana

Our guiding principle in international affairs is that every national group has a right to self-determination; that the essence of democracy is that minorities and ethnic groups comprising a nation should not be subjected to any form of discrimination, and should happily accept the authority of the national government in the knowledge that they form no insignificant part of the national communi

Progressive, Africans argue that tribalism is one of the most disruptive influences confronting newly independent sub-Saharan African states. Tribalism, they argue, is the basis for hatred between peoples within a country as well as between countries. If African states are to take their rightful place in the world, progressive Africans believe, tribalism must be destroyed.

Nicaragua's Miskito Indians are again front page news. This time it's for two reasons and, significantly, not for a third. First, formal peace negotiations between the rebel Indian organization MISURASATA and the Sandinista government stalled in late May.

The Kenya government's 1983 Kenya Official Handbook states that to better appreciate recent developments in the country, "it is useful to indicate some of the problems inherited by the first independent African Government led by the late President Kenyatta" (1983:31).

The situation of Eastern Paraguay's indigenous population improved from 1977 to 1982. Much of the improvement came in the critical areas of land acquisition and rights. Although less than a handful of communities have received formal title, considerable demarcation has taken place and a few communities have been recognized as National Indian Colonies, an essential step toward eventual titling.

Ethnic Identity on the Sudan-Ethiopian Border

The watershed of the White and the Blue Niles is not only marked by a sharp contrast in topography and vegetation between the Ethiopian highland and the Nile basin. The international boundary between Ethiopia and Sudan and the administrative boundary between northern and southern Sudan separate cultures as different as those of the Oromo, the Nuer and the Arabs.

Continuous wars for the last two decades have brought the Western Somali people unprecedented suffering. Victims of the Ethiopian regime's repressive measures including massacre, robbery, torture, indefinite detention without trial and denial of basic human rights, hundreds of thousands of Western Somalis have been forced to abandon their homeland to live as refugees in neighboring countries.