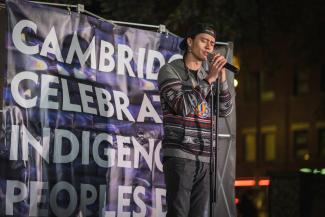 I am a storyteller; I tell the stories of my people. Indigenous Peoples descended from some of the best storytellers in the world. Our stories survived genocide, and our stories survived occupation,” Frank Oyate Teca Obmani (Walks With Young People) Waln (Lakota) said as he officially opened Cambridge, MA’s first Indigenous Peoples Day Celebration on October 5 in Harvard Square at Winthrop Park. Just before Waln, Hannabah Blue, Navajo poet and spoken word artist, made a guest appearance on stage with her powerful poem, “It’s Trendy to be Indian.”

Before performing his first song, “Remembrance,” Waln gave a short introduction to its significance: “I was taught recently by an elder that remembrance is something that is very important to remaining grounded. We need to remember who we are and where we come from, the people and places that made us. By remembering those things, those that came before us, it helps us to remain rooted and grounded. The fact that it’s 2018 and this is the first Indigenous Peoples’ Day Celebration in Cambridge...we need to do better at practicing remembrance of the land we’re living on. This is a song about who I am, where I come from, and how I got here today.”

Waln is an award winning Sicangu Lakota hip hop artist, producer, and audio engineer from the Rosebud Reservation in South Dakota. A recipient of the Gates Millennium Scholarship, he attended Columbia College in Chicago where he earned a BA in Audio Arts and Acoustics. Among his professional accolades are three Native American Music Awards, the 3Arts Grant for Chicago Artists, and the Native Arts and Cultures Foundation 2018 National Artist Fellowship for Artistic Innovation. He has been featured in The Fader, Vibe, NPR, Paper Magazine, ESPN, and MTV’s Rebel Music. Waln travels the world sharing his story through music and presentations focusing on healing and reconnecting to our roots.

Speaking about the challenges he faces as an Indigenous person—symbolic of what too many Native people face every day—Waln told the audience that he finds himself on a very different path now than where he started from. Originally a pre-med student and Gates Scholar at Creighton University in Omaha, Waln said, “I studied pre-med because I didn’t think I could follow my passion of music, I didn’t think I could use my gifts to help people. I was very wrong. It took me a while to figure that out. I landed in Chicago where I went to art school. In the first week I was there, something happened that changed my life forever. I was in the elevator of the dorm building I was living in in downtown Chicago. I come from the country—there is one stoplight on our whole rez, which is about the size of Rhode Island. It was a big culture shock for me to be in the city. I get on the elevator and this girl gets on with me and she’s not Native. She’s like, ‘you have really pretty hair, what are you?’ And I’m like, ‘thank you, I’m Lakota.’ She didn’t know what that meant, so I said, ‘I’m Native American.’ And she looked at me with the most confused look on her face and said, ‘you guys are still alive?’ Just think about that! This college educated adult...there’s a lot of adults in this country that think we don’t exist. They’re living on our land that was colonized, 99.8 percent of our people wiped out. Imagine that, not even having an identity. People think we don’t exist. I started realizing that whether it was books, classrooms, media, film, music—it was all stories about Native peoples written by non-Native people. A lot of times it was people who had never set a foot in our communities, they were literally making stuff up. When I moved to Chicago I realized that 99 percent of my conversations with non-Native people were about dispelling myths that white men made up about Native people. [So] I decided to use my music, my gift, to just tell people about who I am and where I come from.”

Waln’s song, “What Makes the Red Man Red,” was born out of that experience. “I wanted to flip racism on its head,” he said. “I remember when I was a kid watching Disney’s Peter Pan, there was a scene with the Indians in Neverland. We captured Wendy...for some reason they’ve always got us capturing white women. We didn’t really do that. The Indians were acting like less than human, savages. I was a boy on the reservation, a Native child watching that cartoon and I was really into it. Then it got to that scene and in my mind I was like, no  Natives I know act like that, is that supposed to be me? It didn’t dawn on me that that was supposed to be me. To me that was like TV Indians, like this made up, fake thing. But when I left home I realized that’s what the world thought about me, that’s what the world was being taught about me, that I was savage, that I was less than human. I wanted to do something with one of those racist Disney songs, and there’s  a lot of them. I found the Disney Peter Pan soundtrack on vinyl in Minneapolis. I took it home, sampled it, made a   beat, and I made a new song.”

Waln also spoke of his gratitude to his mother, who raised him as a single parent and performed a song about her bull riding years in her youth. He spoke about the Lakota language and the reasons why his grandmother, a residential school survivor, did not pass the language to her children and grandchildren, and about his journey of relearning the language and singing in the language. At the end of the show, Waln took the time to greet a long line of fans, signing autographs and taking photos. The spirit of the concert echoed Blue’s words: “When we bring people together in spaces like these, it is incredibly healing...healing for ourselves and for the land.  We are taking over spaces that were traditionally not for us, that excluded us, and we are reclaiming them, renaming them.  We are overpowering the systems that kept us from them.”