Skip to main content
44-3: Back to Our Roots: Indigenous Food Solutions 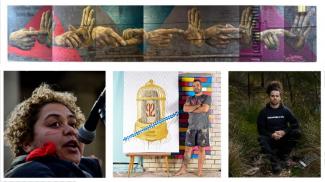 Australia’s Indigenous (Aboriginal and Torres Strait Islander) Peoples have long identified with the term Black; more specifically, as Blak (or Blackfullas). A deep affinity with African-Americans in particular—from the founding of an Australian chapter of the Black Panther Party in the 1960s to the subsequent embrace by Blak youth of U.S.- originating hip-hop culture—exemplifies a continued feeling of connection to a global Bla(c)k experience.

Accordingly, as the #BlackLivesMatter (BLM) movement spread across Turtle Island, decrying the deaths of African-Americans at the hands of law enforcement, the issues it centered on quickly resonated with Blak Australia—for which the crisis of Aboriginal Deaths in Custody had already solidified as a rallying cry. During the first half of 2020, a series of mass protests and other public expressions of solidarity rose up both as counterparts to those happening in the U.S., but also to remind their own country that Blak Australian lives matter, too. These three creative forces, Tarneen OnusWilliams, Neil Morris, and Warraba Weatherall, are among the leading voices bringing attention to these urgent concerns through art and activism. 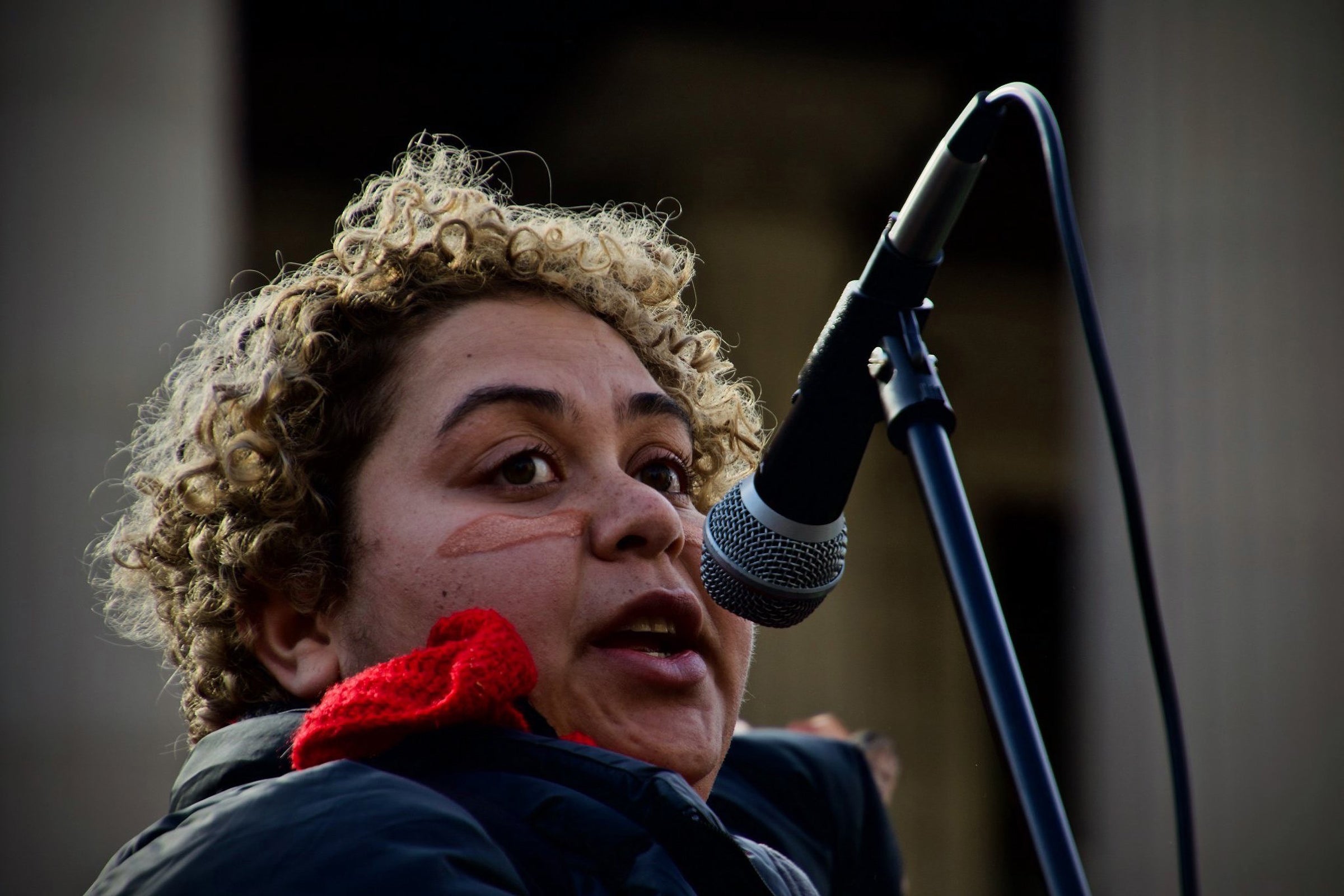 Tarneen Onus-Williams (Gunditjmara, Bindal, Yorta Yorta, and Torres Strait Islander) is a queer activist, writer, filmmaker, and social worker living in Wurundjeri Country who, as a member of Warriors of the Aboriginal Resistance, co-organized the massive BLM protests in the city of Melbourne this past June. They credit friend and mentor Gary Foley (Gumbainggir), a longtime activist and onetime member of Australia’s Black Panthers, for the inspiration. “[Gary] said, ‘You need to capture the moment and use this opportunity to talk about and bring focus to what’s happening here.’” Indeed, as Australian mainstream media sent reporters to cover the U.S. Movement for Black Lives and subsequent protests for George Floyd in the U.S., they continued to all but ignore the subject of Blak Deaths in Custody at home—until the local protests rocked Melbourne and other cities throughout the country.

“My family members have always been activists fighting for Aboriginal rights,” Onus-Williams says, “whether it was out in front of the local real estate office demanding access to housing for our people, or at the steps of some multibillion dollar company to protect our land.” In that vein as well, they discovered their creative voice of protest in filmmaking, as another means to bring these concerns to both local communities and larger audiences. Onus-Williams most recently co-directed, wrote, and produced (with filmmaker/DJ Paul Gorrie) the documentary short, Young Mob Questioning Treaty, which debuted at the 2019 ImagineNative Film Festival in Toronto. The idea for this arose from their personal experience, having served on the Victorian Aboriginal Treaty Working Group, and wanting to capture voices of other Aboriginal youth critical of the treaty process.


Unlike prominent activists of prior generations, who were “mostly men and heterosexual,” Onus-Williams points out that today, major rallies and initiatives are largely organized by women, as well as queer and/or non-binary community members. Another vital development is in coalition building among the diversity of groups representing at BLM related events; not only Aboriginal and Torres Strait Islander communities, but also (those defined in Australia as) South Sea Islanders—with roots from Vanuatu, West Papua, Solomon Islands, and Papua New Guinea—and, notably, the country’s emergent African diaspora, which links back to countries like Somalia and South Sudan. 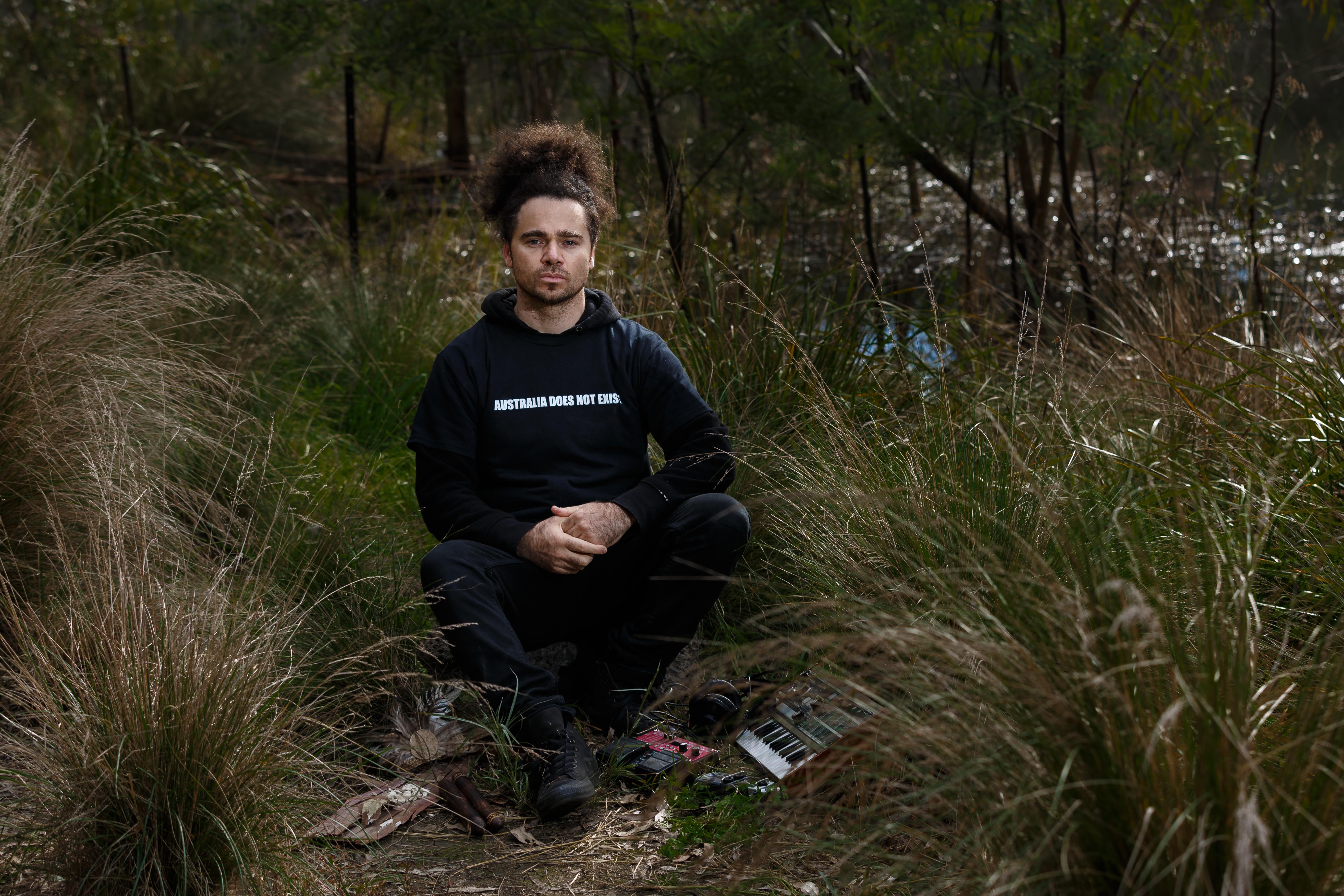 Neil Morris (Yorta Yorta) is a rap artist and musician based in the town of Mooroopna in Shepparton, Victoria, whose music solidifies him as a potent voice fighting for decolonial justice in Aboriginal communities. He launched his current project, DRMNGNW, with the song, “Australia Does Not Exist,” in which he reminds audiences about the histories of countless Indigenous nations surrounding them—none of which were called Australia.

As a “young hip-hop nerd,” Morris says, he felt kinship and solidarity with the Afro-diasporic communities in America, whose music, especially from the artist Nas, he was drawn to. Until about 2010 alas, the gatekeepers and most widely promoted artists of Australia’s own scene were almost exclusively white. He sees the more recent Indigenous hip-hop proliferation as parallel to the resurgence of the Indigenous rights movement there overall, making possible what he describes as “more and more young Aboriginal Australians feeling strong in their voice—and in the music.”

Morris credits his time at university for provoking a deeper interest in the history of Aboriginal activism, which comes through in his musical endeavors. His Yorta Yorta community was “the first to uprise against the mission system,” while his own family tree has included notable figures at the forefront of such political movements, such as Sir Douglas Nicholls, who was “heavily involved in forming” the Aboriginal Advancement League—and was also not only the first and only Indigenous governor of an Australian state (South Australia) but also the first Indigenous Australian person to be awarded knighthood.

As to his activist objectives through hip-hop, Morris says, “My music is made for the front lines. As a First Nations person, I have known police as those who’ve intended to intimidate and harass our Aboriginal community, which currently experiences the highest incarceration rate in the world. I want to bust (lyrics like) this out, whenever I see these officers:

Lest we forget the frontier wars
And the genocide blueprint, it does live on
Deaths in custody, it does cease not
More prolific then ever, forced by bigots
Still they gallivant and they rob us
Children again and again stolen
In the blink of an eye
They are with us, and then they are gone
Still, we amidst all these storms
230 years on pillage and scorned, culture ignored
Fictions insidious, adorned
All of our sacredness shaken and torn.” 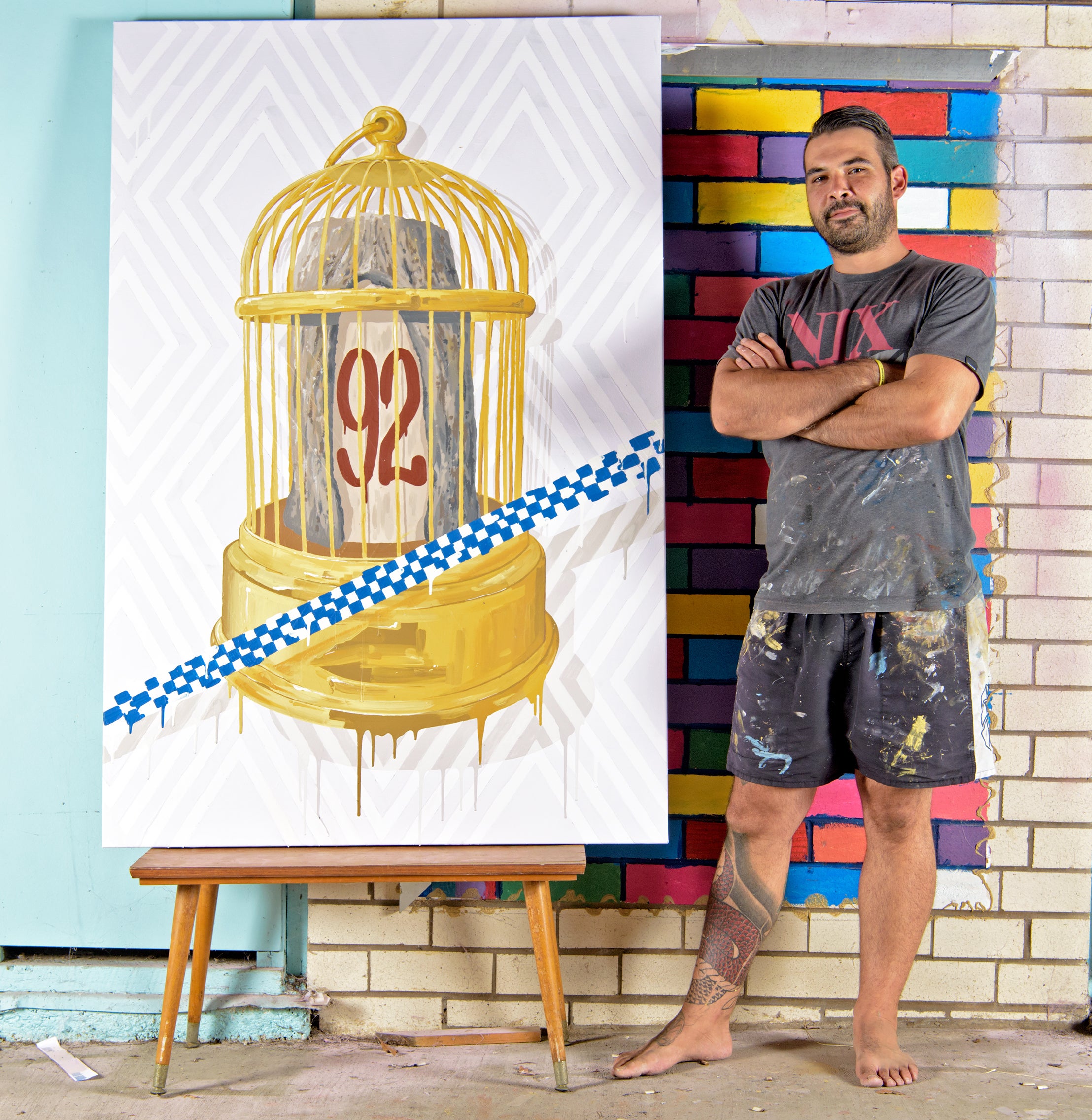 Brisbane-based artist, researcher, and university lecturer Warraba Weatherall (Gamilaroi) found his first creative calling in street art, becoming part of LandWriters, a collective also known as Graffiti Writers for Land Rights. What started with getting his own tags up on walls evolved into a body of work that now includes massive public murals, site-specific installations, and sculptures on display from galleries and museums to community walls and protest events. Through a parallel journey into academia, he also engages in research through which to ground his arts practice in its history-referencing, decidedly political objective: to use art to assert ideas about issues facing Aboriginal Australians, as a catalyst for conversation, to spark change, and in an effort to counter how, all-to often, “Indigenous artists making political work (particularly within the street art movement) are censored.” 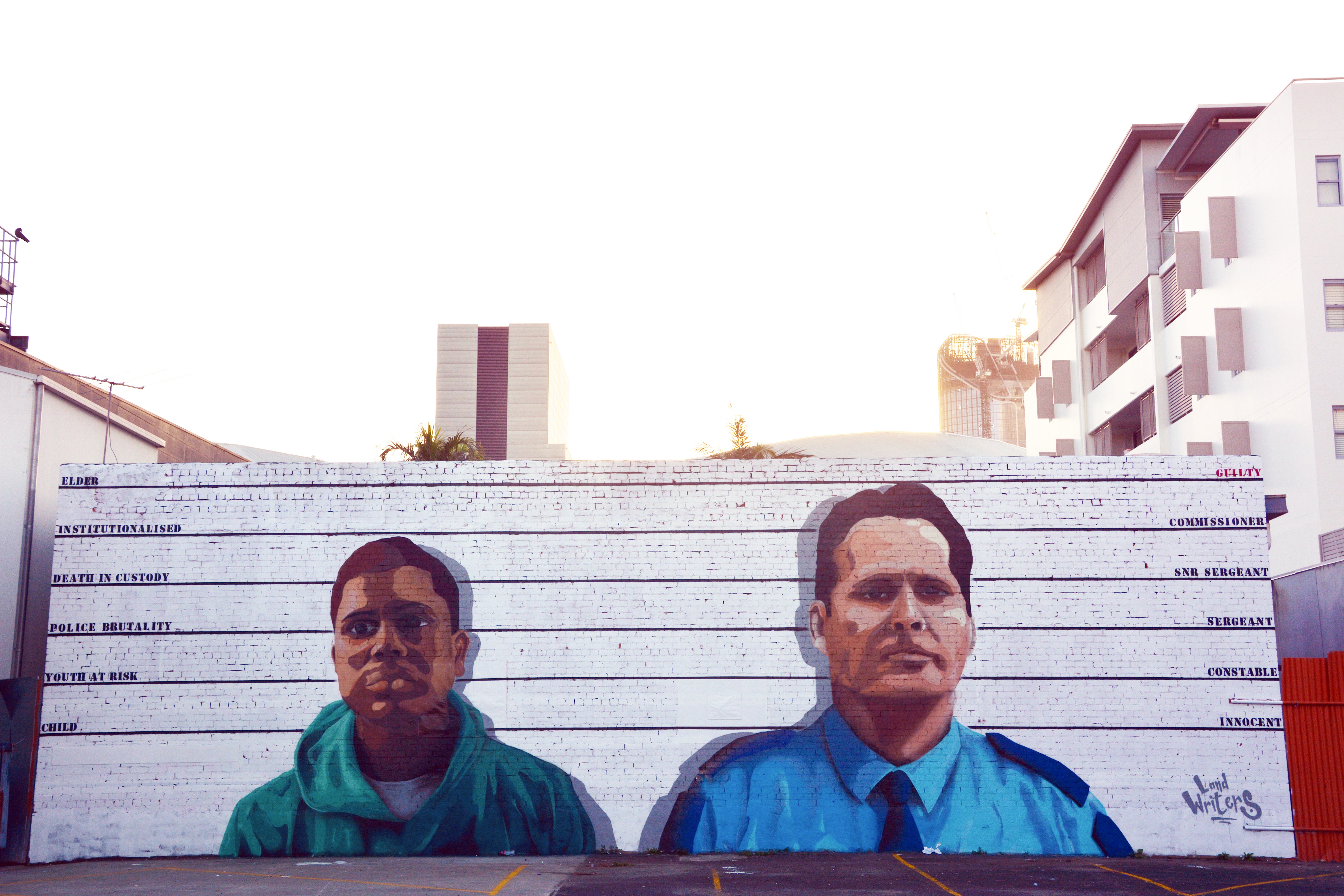 From teaching art to incarcerated youth to researching his own ancestors branded as criminal outlaws by the colonial government (Australia was founded by and for white criminals expunged by the UK) Warraba Weatherall’s work has sought to create counter-narratives to the dismissal and demonization of Aboriginal communities. Its continued focus, he explains, looks at “institutional racism in the Australian judicial system and its lineage from the colony, as well as the racial pseudo-science (such as phrenology) which formed much of the early dynamics of policing.” What often gets left out of that discourse, he says, is that prison designs “were often tried out first in the colonies, on Indigenous Peoples.” His 2017 exhibition, Institutionalized (Metro Arts Gallery) featured works that examine and critique this history as having been a power apparatus for regulating Black bodies. 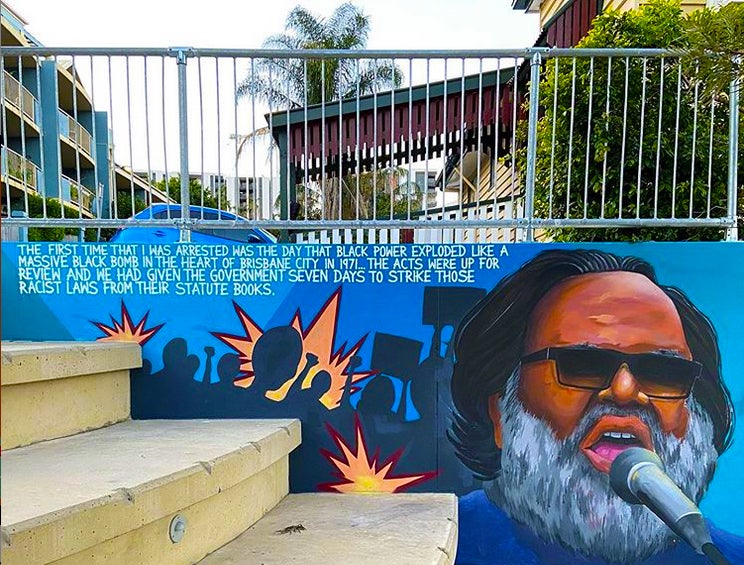 “The murder of George Floyd, and so many other deaths at the hands of law enforcement in the States,” Weatherall agrees, “has sparked a worldwide movement for Black Lives, and it indeed resonates with us in Australia.” But he also emphasizes the importance “to keep focus on the movement language that we use here every day: Aboriginal Deaths In Custody, the struggle for self-determination, protecting ancestral knowledge, and so on,” underlining that the lives of Blak Australians must remain front and center to the fight for social justice on their own lands.

— Cristina Verán is an international Indigenous Peoples’ issues specialist, consultant, researcher, strategist, editor, curator, educator, and media maker. She is a longtime United Nations correspondent and was a founding member of the UN Indigenous Media Network.