The Birds That Bring Gifts 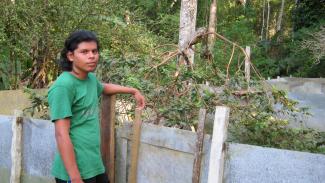 My people, the Bribri, have always watched and waited for the birds that visit our lands each year in March and again in October. Now we know that these are migratory birds of prey—raptors—that travel thousands of miles from Canada to South America and back each year, tracing the ancient flyways of their species.

Our people call these birds irö. One of our elders, Catalina Morales Sánchez, told me the origin story of these birds. She recounted,
When Sibö (God) celebrated the birth of the first Indigenous people, he invited the irö to the feast because they were the best dancers. In those times these birds had human form. They were the keepers of squash seeds, and they offered these as a gift to Sibö, who cooked the seeds and shared them with everyone at the feast. The irö also brought gourds to carry water and chicha (a fermented drink).
So in the old days, when our people were preparing the ground to plant corn, when they saw the irö passing overhead, they asked them to share a little of the seeds they carried. Sometimes the irö circle above you as if they are listening to your prayer, and they respond by dancing over your field. You raise your arms and cry, “a irö, a irö be'ina’kak amúat-na,” which means, “northern birds, northern birds, leave me a little of your food.”
Then, when your corn and beans germinate, little squash and gourd plants come up, too. They are the gift of the irö.
The irö are giving other gifts to our community now. For the last ten years, we have been working with ornithologists to make official counts of the migrating raptors, and this has brought new opportunities to us. People from the ANAI Association here in Costa Rica and the Hawk Mountain Sanctuary in the U.S. recognized that KéköLdi had a remarkably high concentration of migrating raptors – different species of eagles, osprey, hawks, vultures, and falcons. They helped us build an observation tower. They taught volunteers from KéköLdi, including me, how to identify the different species, both the juveniles and the adults, because their coloring is different at different life stages. Since the bird books were in English, we learned the English names of all the birds and their scientific names, and we already knew their names in Spanish and Bribri. We practiced using the binoculars and the counter, and we made a schedule for everyone participating in the count. Now, after ten years, KéköLdi is recognized as an Important Bird Area by BirdLife International, and hundreds of students and ornithologists come to KéköLdi to experience the migrations.
It is amazing to participate in the counts. My personal record for counting raptors is 60,000 birds in one day. Actually, on that day 25,000 birds passed in a single hour, and I was alone in the tower, counting like crazy! We click once for every 10 birds, but it was just constant clicking on that day. It’s easiest to count the birds when they use thermal “lifts” to gain altitude. Thermals develop all along the coast as the sun heats the sandy beaches during the day. The raptors get a ride up these thermals, just like an elevator. They circle up the thermal, and then we can count them when they come out the top and fly off. The record count for one day in KéköLdi is 600,000 raptors. That happened in October 2007.
In 2006, another bird study began in KéköLdi, and my brother Keswar and I both participated from the beginning because we love birds and wanted to learn more about them. This is a monitoring program for smaller birds, some of them migratory and some of them local. The coordinator is Daniel Martínez, and I am now the deputy coordinator. We catch the birds in mist nets, put bands on them, record data about them, and then release them. We place the nets in places that have different ecological characteristics, like abandoned cocoa farms, managed forests, secondary-growth forests, forest edges, streams, and rivers, so we can make comparisons. At first, when we were just learning, between two and three percent of the captured birds died through our lack of experience, but now we have a zero percent death rate.
\
We have lots of ideas about ways to expand this monitoring project. I would like to become director of the project someday, but first I need to complete my studies. When people find out that I am only 19 years old, they tell me I’ll be way ahead of the other university students because I’ve been doing field studies with ornithologists for years already. When I think what would have happened had I not been interested in birds, I realize that I would not be writing this article, and I might not have had the opportunity to go on studying. Maybe this is another gift from the irö.
Duaro Mayorga, Bribri, lives in the KéköLdi Indigenous Reserve in Talamanca, Costa Rica. Paula Palmer is director of Cultural Survival’s Global Response Program. Catalina Morales Sánchez’ story of the irö is published in Tradición Oral Indígena Costarricense, Vol. IV, Año IV, No. 1-2.