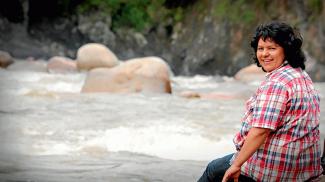 “When a bright star of hope and power goes out, we grieve deeply because we know our pain and loss is much larger than ourselves and timeless over generations in our struggle. Berta Cáceres devoted her life to her people, to Indigenous people worldwide, and to life itself. Her murder is a criminal act of violence, is senseless, and a deliberate attack on what Berta stood for—the rights of Indigenous Peoples. It should be condemned at every level, from the State to the international, and the perpetrators brought to justice.” — SUZANNE BENALLY, EXECUTIVE DIRECTOR OF CULTURAL SURVIVAL

Some define courage as knowing the danger and continuing on regardless. In that sense, Berta Cáceres was one of the most courageous leaders I have ever met.

Cáceres was a Honduran Indigenous leader deeply involved in the protection of Indigenous land rights in Honduras. She was murdered on March 3, 2016 at her home in La Esperanza, Intibucá, Honduras, after many years of organizing in the face of repeated death threats and the assassinations of her colleagues. Attackers entered her home at approximately 1:00 a.m., according to Tomas Membreño, member of the Commission of Indigenous Peoples of Honduras (COPINH), of which Cáceres was the coordinator.

Cáceres had spent many months in hiding after receiving threats to her life over the years for her work accompanying movements that defended her community, in addition to suffering from political persecution and multiple calls for her arrest. The international community had strongly condemned the threats to her life. In 2015, Cáceres, together with COPINH and her community, received the highest recognition on an international scale for environmental defenders: the Goldman Environmental Prize. Prior to her death, Cáceres had applied for and received precautionary measures from the Inter-American Commission on Human Rights, meaning that the government of Honduras was obligated to provide police protection. However, there was no police detail protecting her on the night of her death.

A leader in the Lenca community, Cáceres helped organize a powerful movement to stop the construction of the Agua Zarca hydrolelectric dam and to protect the Gualcarque River basin, a sacred site for the Lenca people. For more than a year the Lenca people maintained a human blockade to stop trucks from entering the dam construction site and thus halted its construction. It was a result of her work that the largest contractor of this dam at the international level, Sinohydro, pulled out of the project. Despite ongoing threats against her life (and the murder of fellow COPINH leader Tomás García in 2013), she remained steadfast in her commitment to protect Mother Earth and her community.

In Cáceres’ Goldman Prize acceptance speech she said, “We must shake our conscience free of the rapacious capitalism, racism, and patriarchy that will only assure our own selfdestruction. The Gualcarque River has called upon us, as have other gravely threatened rivers. We must answer their call. Our Mother Earth—militarized, fenced-in, poisoned, a place where basic rights are systematically violated—demands that we take action.”

Honduras is one of the most violent countries in the world, and US interventions have contributed to increased militarization and the destabilization of democracy in the country. Since the 2009 US-backed coup that forced the former democratically elected president, Manuel Zelaya, out of office, crime and homicide have risen sharply—especially against women, Indigenous Peoples, and human rights defenders. Cáceres was active in leading protests against the coup.

Cáceres held the role of coordinator of COPINH and was also a member of the coordinating team of the National Platform of Social and Popular Movements of Honduras (PMSPH). She was a major contributor to Cultural Survival’s campaign work against the Patuca III Dam in La Moskitia in 2011, tirelessly documenting the extensive human rights abuses experienced by her community and Indigenous Peoples across Honduras in order to bravely denounce these actions at the national and international level via reports to the United Nations.

For many years Honduran authorities tried to silence Cáceres, but she refused to give up the fight to defend her Indigenous lands, the sacred Gualcarque River, and the protection of Mother Earth. In 2013, the government brought charges against her and other Lenca leaders with the clear hope of putting them in jail and disrupting their activism that had so relentlessly impeded corporate extraction of resources. Cáceres faced trumped up charges including illegal possession of a weapon “in contravention to the internal security of Honduras,” with claims that she posed “continual danger” to the security of the nation and “invasion of land” against the company; never mind that the company had invaded Lenca land.

Nonetheless, with tremendous international solidarity and support, and of course her own reserves of courage and clarity, Cáceres was acquitted of charges and continued her work. In fact, she gained widespread acclaim as a human rights and environmental leader, much to the ire of Honduran authorities, who began to track her every move. She also continued collaborating with other movements in Honduras, including the Afro-descendant Garífuna community that, like the Lenca, stood in protection of their ancestral territory against corporate and government takeover.

After Cáceres’ murder, the Black Fraternal Order of Honduras (OFRANEH) mobilized busloads of members to stand with their Lenca sisters and brothers. OFRANEH leader Miriam Miranda said, “Berta is not dead. Her spirit lives in all of the rivers of Honduras and the world that are threatened by a backwards idea of development that favors the bloodthirsty political and business elite, whose antiquated vision calls the death of rivers ‘clean energy.’ We have walked alongside Berta on many paths and the struggle to defend our territories and cultures in the face of the devastating aggression of neoliberalism has been one of our most important bonds. They want to convert the natural resources on Indigenous lands into commodities to be auctioned off, without any consent from our peoples, who they see just as statistics who can be dismissed."

Like COPINH, OFRANEH knows loss and intimidation, as members of the Afro-descendant Garifuna communities continue to resist post-coup land grabs for projects like agrofuel plantations and tourist resorts. They, too, have suffered criminalization, arrest, violence, and even killings. As Miranda says, “We want our children to breathe clean air for generations to come. We want to have rivers. We don’t just want to wash our clothes. We also want to be able to drink the water, to be able to have water in our homes. That is the struggle we are fighting. For that, they kill us. For that, they killed Berta Cáceres.” Cáceres joins a long line of martyrs who have refused to be silent in the face of injustice. Her voice continues to call out in defense of rivers, of lands, of peoples, of the earth. Berta Cáceres, Presente!

Carol Schachet is director of development and communications at Grassroots International (GI). GI is a proud funder and political ally of COPINH and Cáceres, as well as OFRANEH and other movements in Honduras and around the world to support the rights of Indigenous Peoples, Afro-descendant communities, small farmers, and communities to land, territory, water, and food sovereignty. Following the murder of Cáceres, GI mobilized its networks and friends, including Cultural Survival, to raise more than $50,000 in support of COPINH and other movements in Honduras.