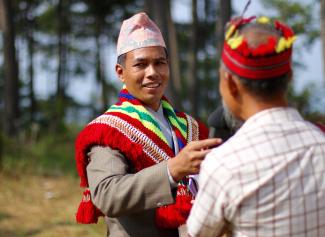 Dev Kumar Sunuwar was born and raised in a Koĩts-Sunuwar Indigenous community in the remote village of Kubu-Kasthali in Ramechhap, Nepal, where there is still no access by roads, no internet or phone, and no government services, quality education, or health facilities. “My childhood was spent in hardship. I had no opportunity for good schooling. My desire to study brought me to Kathmandu, where I worked as a house servant, taxi driver, and then a teacher, and now a journalist,” he says. Today Sunuwar holds masters degrees in journalism and mass communication, political science, and law, specializing in international law and human rights from Tribhuvan University in Nepal.

“My people are among the most marginalized and vulnerable groups within the Indigenous community. They have no access to or participation in media. I have been the only person to study journalism and practice journalism among all 55,722 Koĩts-Sunuwar in Nepal. Seeing the hardship in my community and the lack of access to communication led me to pursue my studies and work in media,” Sunuwar says.

Sunuwar first worked as an intern reporter at The Kathmandu Post, Nepal’s largest selling English language newspaper, and was successively promoted to reporter, senior reporter, and assistant editor. Later he trained and worked as an investigative reporter for the Centre for Investigative Journalism-Nepal, producing investigative stories on health issues. In 2010, Sunuwar was accepted for an Indigenous fellowship at the Office of the High Commissioner on Human Rights, which inspired him to begin to research his own Koĩts-Sunuwar community as well as Indigenous issues in Nepal. He began writing a column on Indigenous Peoples and minority groups, and in 2012 he quit the mainstream media and went back to his isolated village to help the community set up and run two community radio stations: Radio Kairan and Radio Likhu.

“The popular saying, ‘necessity is mother of invention,’ is very much true in our work. The product, services, and solutions that I, together with my colleagues, have achieved so far, were the result of necessity of our community. We wanted to enable our community to access, produce, and share information using modern means of communication for their empowerment. We dared to set up different media such as community radio, television, online, and print, because we believe it is through communication the community members are able to understand their rights and issues, express their voice, and participate in a dialogue and influence decisions that affect their lives.”

On his newest role of Cultural Survival Community Media Grants Project Associate, Sunuwar says, “The role of Cultural Survival is to create networks of Indigenous communities and support communication efforts to help strengthen the capacity of Indigenous Peoples to establish or improve community media as well as help them access information. My role is to help communities enhance their voice and communication by strengthening the capacity of radio, which is the most useful communication platform in the grassroots level. Moreover, I am the key person on the Cultural Survival team to reach to the communities most in need, to enhance their inclusion and access to information and effective communication channels, so that Indigenous Peoples in Nepal can amplify their voice and participation in media and any decision-making affecting them.”