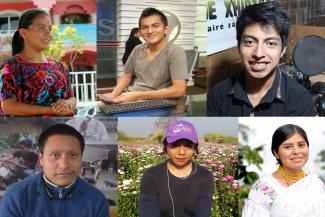 Youth are the future of Indigenous communities, and strengthening youth leadership is essential in fostering the next generation of Indigenous leaders. Cultural Survival’s Indigenous Youth Community Media Fellowship Project, a part of the Community Media Grants Project, aims to support Indigenous youth ages 14–25 in building capacity in media, journalism, radio production, advocacy skills, technical abilities, and regional networking through trainings, community radio exchanges, radio production, and conference attendance. This fellowship will enable six fellows to successfully represent the voices of their communities and bring awareness to local and global issues through their proposed projects. We are excited to announce our first six Indigenous Community Media Youth Fellows. 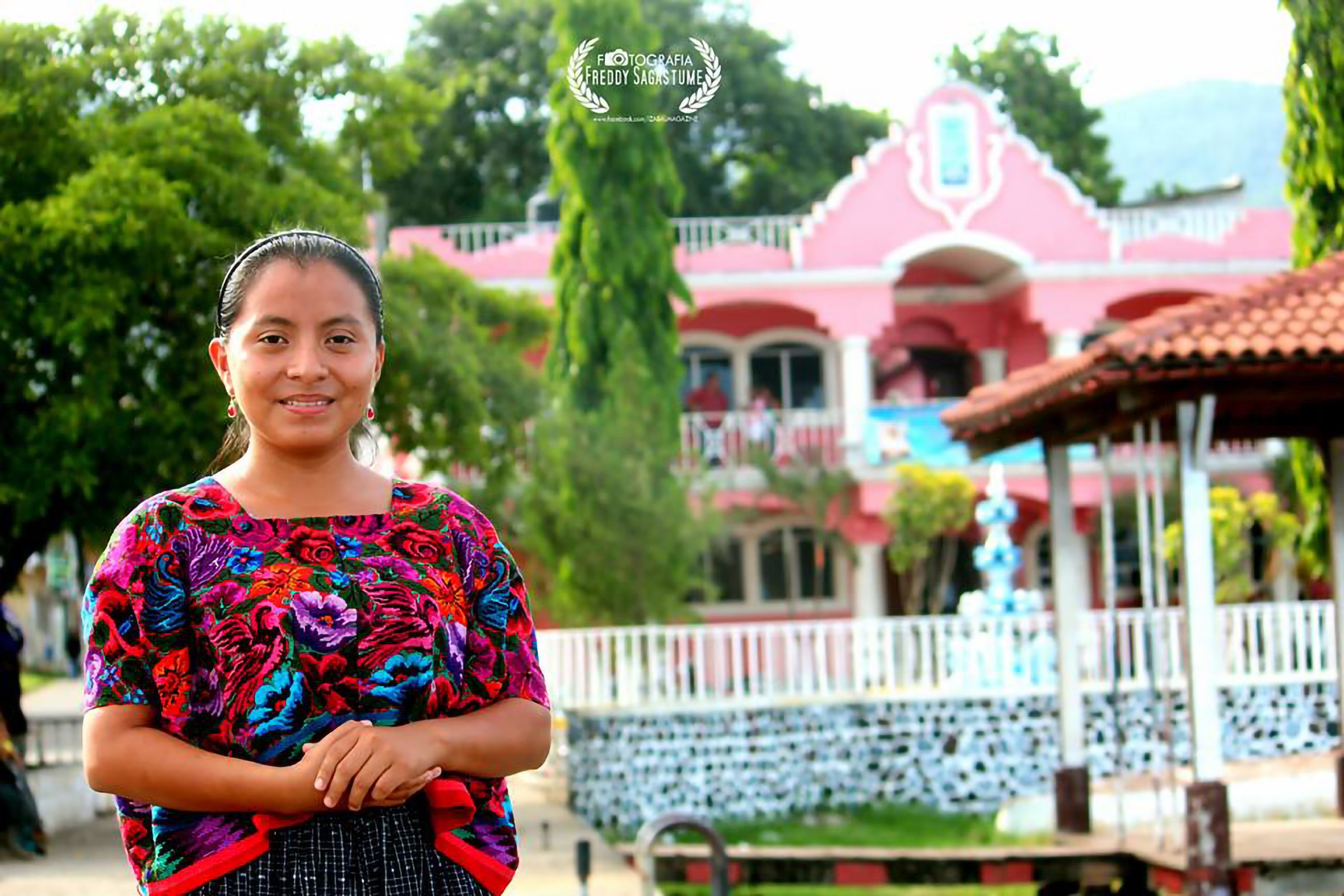 Delia Marisela Maquin Cucul, 19, currently works at the Ministry of Culture and Sports as a cultural promoter and is studying law and social studies at the Mariano Gálvez University of Guatemala, in El Estor, Izabal. Maquin aspires to be the first Maya Q’eqchi’ human rights lawyer in her community. A member of the board of directors and volunteer at Xyaab Community Radio ‘Tzuultaq’a, Maquin has been managing “Reflexionemos con la Molendera,” a program on women’s issues in her community. She also participates in radio production workshops organized by Desensoría Q’eqchi’ with Indigenous journalists, organized by Federación Guatemalteca de Escuelas Radiofónicas and the Asociación Latinoamericana de Educación Radiofónica, as well as in radio production and women’s leadership workshops organized by Cultural Survival. Maguin’s fellowship project is to develop training in radio production for 22 young people between the ages of 14–25 to strengthen youth leadership. She seeks to use radio as a platform to create innovative solutions for the community, and to liberate the voices of the Maya Q’eqchi’ people. 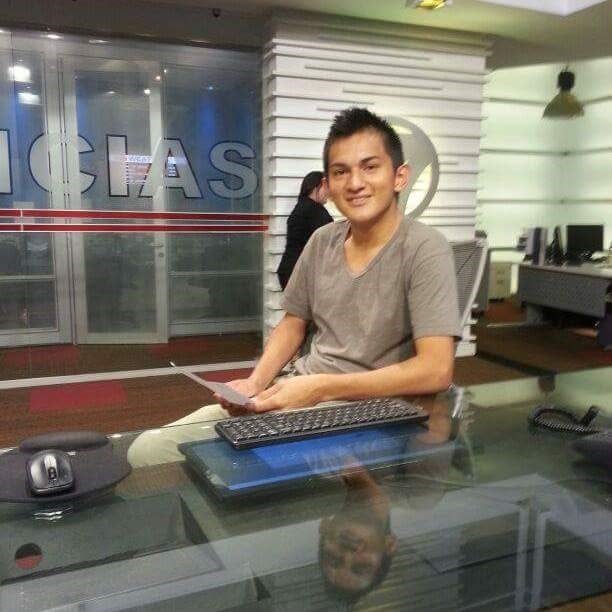 Ali González Rojas, 22, is currently in his third year studying journalism at the University Latina of Costa Rica. He has one year of experience at Radio Actual leading the radio program “Eventos Nacionales” (National Events), which highlights current events in politics and law in the country. As a Boruca youth, González has struggled in being seen as a minority and feels misrepresented in Costa Rica. As part of his fellowship, he wants to create radio programs that focus on Indigenous issues and share the experiences of Indigenous people in Latin America to promote new social change makers. The programs will be produced in the Boruca language and will air weekly on Boruca Cultural Radio 88.1 FM. The title of his project, Matices, refers to the variety of topics that the radio program will cover, including the environment, education, rural planning, agriculture, water, and politics, all promoting the rights of Indigenous Peoples. He hopes that people will lose their fear of being in front of the microphone in order to make their voices heard. 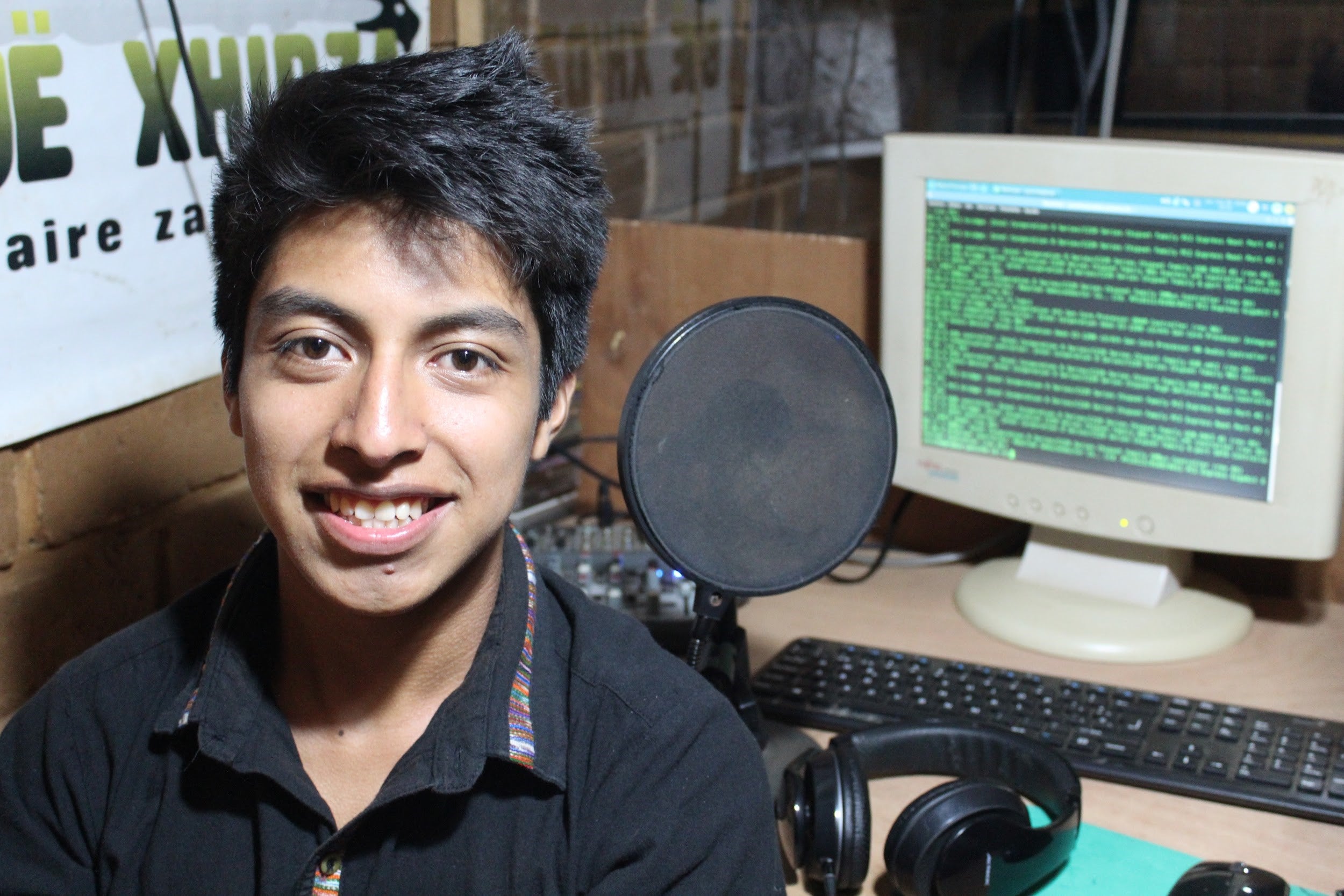 Since the age of 9, Joaquín Yescas Martínez, 17, has been volunteering at Radio Bue Xhidza Aire Zapoteco, an independent radio station that airs social, cultural, and educational programming in the community of Santa María Yaviche in Oaxaca. In addition to being a digital activist, Yescas is fluent in Ditza Xhidza Zapotec and loves to play chirimia (Xhidza music). Since 2015, Yescas has been working on a project, the Penguin School of Xhidza, which provides free learning and knowledge of the Ditza Xhidza Zapotec language to communities in Zapoteco Rincón. As one of the youngest digital activists in Oaxaca, his dream is to create a Linux Xhidza, a free, independent operating system by the community, for the community. With the increasing misuses and abuses of personal data, Yescas recognizes the need to inform young people about privacy and security issues concerning their internet use. He aspires to share his knowledge of digital media to defend Indigenous cultures in a new era of technology, and aims to provide explanations and solutions so that Indigenous people will know how to secure the data they use and share. Yescas’ fellowship project is a bilingual radio program in Spanish and Ditza Xhidza Zapotec focused on the defense of ancestral lands and security of internet privacy rights for Indigenous youth. He will also create a website where the radio programs will be hosted and will distribute weekly digital bulletins, expanding Radio Bue Xhidza’s reach in local communities. 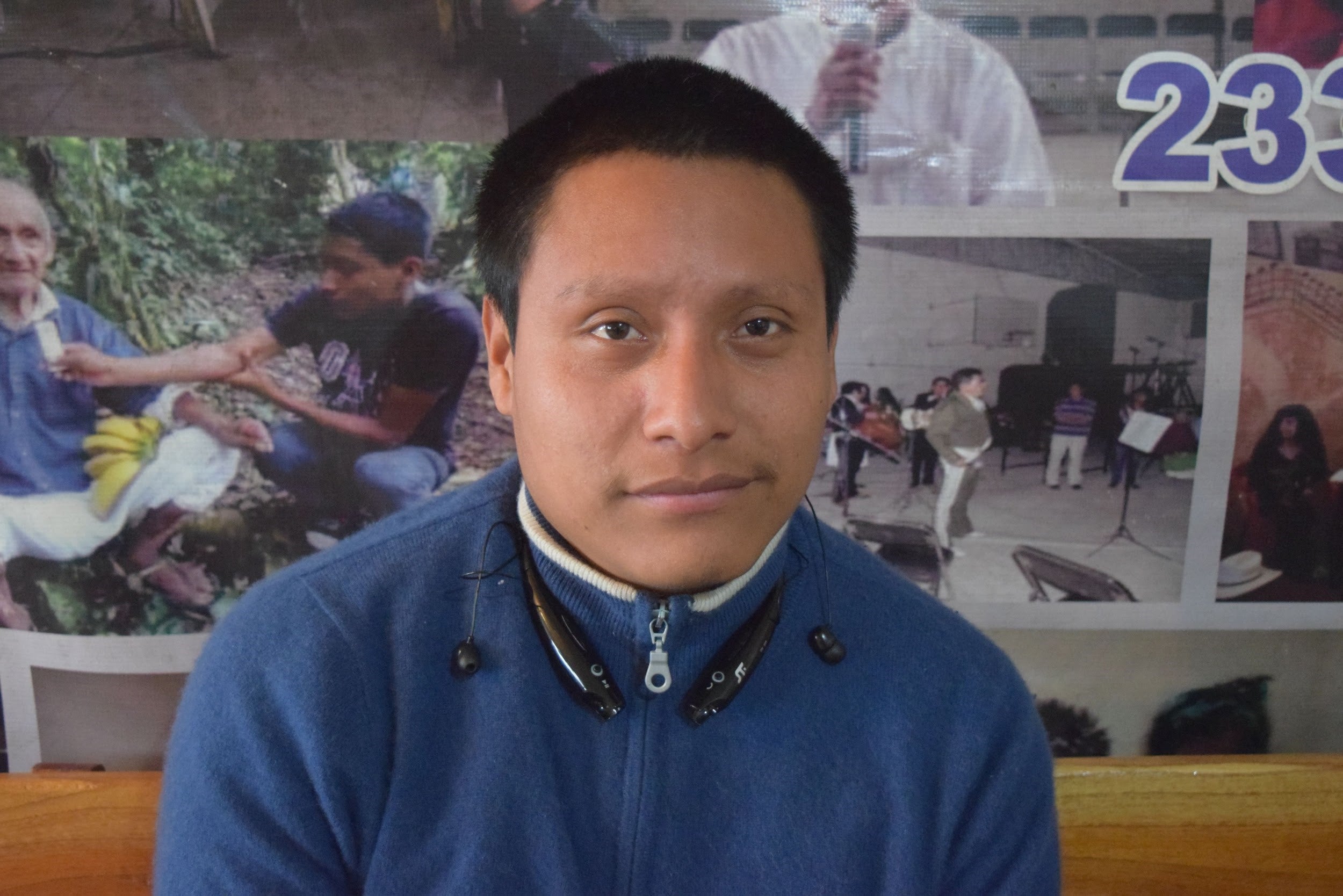 Ignacio Contreras Diego, 23, has been part of the Radio Tzinaca team for 5 years as a programmer, producer, and broadcaster, contributing to the station’s stance against corruption and impunity in Mexico. In 2015, he produced the acclaimed program “Ojtokalis,” (“adventures” in Nahuatl), which led to an initiative collecting the stories, language documents, and customs in the Cuetzalan region. In 2017, he produced another radio program, “Ininixpetanilis Totatajuan/El Sabor de Mi Pueblo,” mainly focused on the knowledge of Nahuatl worldview. Contreras fellowship project is to organize three training sessions in 10 months for youth in radio production and to develop weekly radio bulletins, blogs, and podcasts on topics related to identity, cultural revitalization, language maintenance, and self-determination. He will also hold public discussions that will be aired live on the radio and online, discussing agricultural issues facing the community such as consumerism and increasing use of pesticides and herbicides. All of the training sessions will take place in Nahua and Totonac-speaking communities. He hopes that these training sessions will encourage young people to use technology as a medium to promote dialogue within the community in their native language. 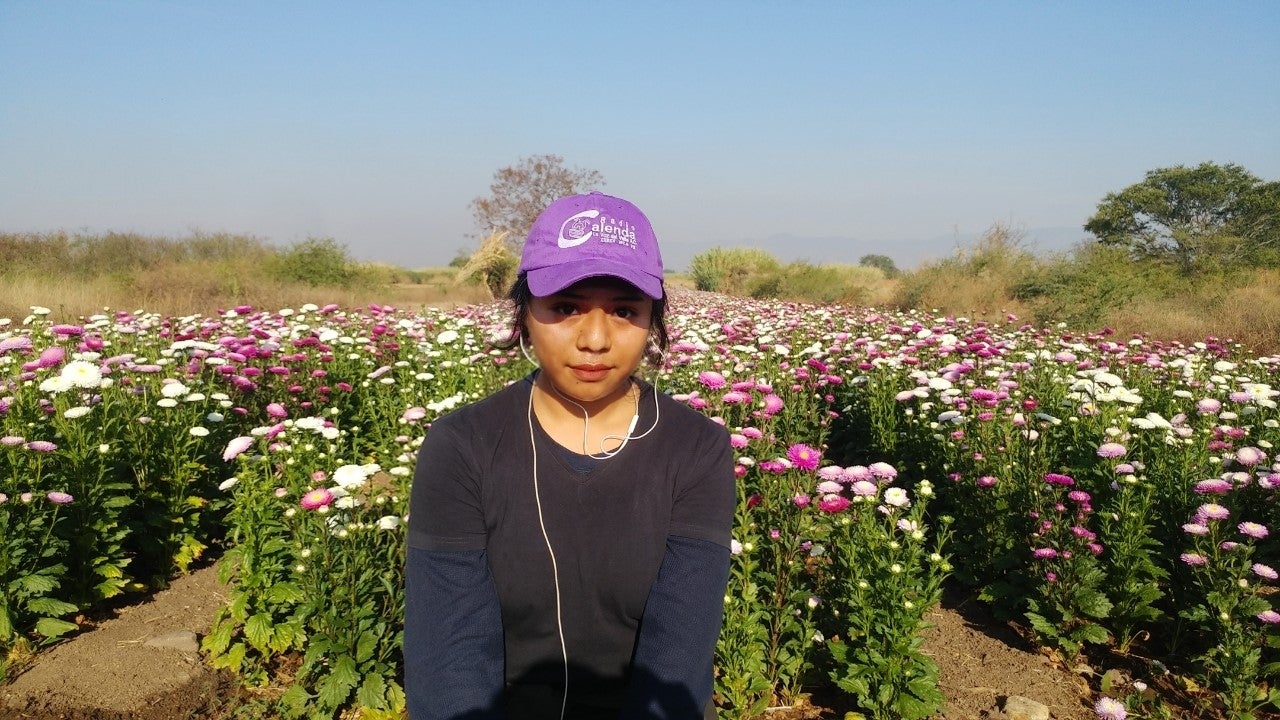 Zyania Roxana Santiago Aguilar, 17, was born in Oaxaca and grew up in the community of San Antonino. She was only three years old when she began participating at Radio Calenda, leading the creation of children’s programming until she was 12. Santiago participated in “Apantallados” (Shielded), a children’s event where participants from all over Mexico working in different audiovisual media gather to raise awareness among legislators to advocate for the legalization of community media. In 2007, she won second place in the AMARC-60 anniversary contest. She was also the youngest participant in the youth program “Poder Joven Radio” (Power Young Radio) in 2015 and 2016. Since 2015, Santiago has run the program “Nueva Forma de Vida” (A New Way of Life) focused on an alcohol recovery group in the district of Ocotlán. Santiago’s fellowship project stems from the poverty in her community experienced by Indigenous women who regularly face discrimination, racism, and misogyny. She will produce a radio series on Indigenous women’s rights to educate the radio audience and local communities. She will also hold a training session with the University of Oaxaca and aspires to collaborate with the other Indigenous Community Media Fellows. Ñusta Sánchez, 20, is a youth leader in her community of Cotacachi, Ecuador. She is an artist at heart singing traditional Kichwa songs, and is part of the Waruntzy dance group that represents threatened Abagos traditions. She recently completed her Bachelor’s degree in science at the University of Technology in the province of Loja, Ecuador. Fluent in Kichwa and Spanish, Sánchez manages the radio programs “Don Dolon, Dolon” and “Wawas” at Radio Publica. Her fellowship project is to share ancestral knowledge in Kichwa with children, youth, and the participation of elders. She will create a radio series on leading cultural workshops based in experiential methodology, participatory action, and archiving documentation. She will also organize six trainings in radio production for children and youth in 18 Indigenous communities in her region. The trainings will be recorded in order to document the sessions and archive the content so ancestral knowledge can be exchanged. Her goal is for the cosmovision of her community to be represented in this process so people will listen to, and appreciate, the stories shared, and for the children of the Kichwa community to become engaged and proud of their culture.