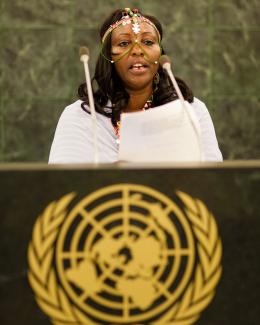 The challenge, therefore, is to ensure that African governments develop elaborate and inclusive frameworks for the implementation of the core principles embedded in the Declaration, such as Free, Prior and Informed Consent, recognition of collective rights of Indigenous Peoples, and right to lands and territories, and ensure these are mainstreamed into national laws and practices. We note with exception the developments in the Republic of Congo regarding its national law on the rights of Indigenous Peoples; the 2010 Kenyan Constitution, which recognizes the historical marginalization of Indigenous communities and provides for the protection of their rights; the Namibian government response to the report of the UN Special Rapporteur; and the decisions of the Universal Periodic Review in relation to the Democratic Republic of Congo.