Advancing the Global Dialogue: UN Expert Mechanism on the Rights of Indigenous Peoples 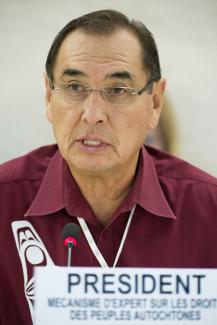 The Expert Mechanism, made up of five independent experts appointed by the Human Rights Council who serve on a voluntary basis, holds an annual five-day session in Geneva, Switzerland, in which representatives from States, Indigenous Peoples, Indigenous Peoples’ organizations, civil society, inter-governmental organizations, and academia take part. To date, EMRIP has completed studies on Indigenous Peoples’ right to education; their right to participate in decision making and its follow-up study on extractive industries; the role of languages and culture in the promotion and protection of the rights and identity of Indigenous Peoples; and a report on its questionnaire for States on best practices for attaining the goals of the Declaration. Most recently, in September 2013, EMRIP concluded a study on access to justice in the promotion and protection of the rights of Indigenous Peoples. The overrepresentation of Indigenous people in incarceration is at epidemic proportions in many regions of the world. In Australia, Aboriginal people make up only 2.3 percent of the total population but over 28 percent of the prison population. In Canada, the Indigenous incarceration rate is 10 times higher than for non-Indigenous adults, with Indigenous people making up 4 percent of the Canadian population yet 23.2 percent of federal inmate population.

Littlechild says that more research is needed, especially in the realm of traditional justice systems: “How do traditional justice systems not only improve access to justice but promote truth and reconciliation in that community? We’ve asked to do a more in-depth look at the situation with women, youth, and Indigenous people with disabilities. What kind of challenges do they have with regard to access and justice? Indigenous participation is critical throughout that whole process. That was a very important recommendation reflected in our report that needs to be considered by our States who might be looking at establishing a truth commission.” This will be the focus of a follow-up study this year. The recommendations from the study call on States to take a “rights-based and culturally appropriate approach to public safety and access to justice guided by Indigenous Peoples’ laws and justice systems.” The report also calls for the training of law enforcement and judicial officials on Indigenous Peoples’ rights, and the use of transitional justice mechanisms, such as truth commissions, which allow for administration of justice through prosecutions, truth-seeking, reparations programs, and institutional reforms. When it comes to access to justice, increased respect for Indigenous Peoples’ own justice systems as a form of self-determination in both recognizing and assigning value to these systems is needed.

In 2011, the Human Rights Council asked EMRIP to conduct a questionnaire seeking the views of States on best practices to attain the goals of the Declaration and in 2012 this was extended to also seek the views of Indigenous Peoples. Littlechild says that the responses, while encouraging, are too few. “The answers to the questions are very high caliber in the sense that they’re very helpful, but what’s disappointing is the numbers. We have very few States and Indigenous Peoples responding to that question, and we feel it’s important to be able to share good practices, what is working for Indigenous Peoples in their implementation that other Indigenous Peoples can benefit from or learn from. Of course the example that’s always held up is that Bolivia passed a law that makes the Declaration a national law; below that there are other States doing good things in terms of how they are implementing the Declaration or using the Declaration in their policies and programs.”

Littlechild attributes lower participation by Indigenous Peoples to the lack of awareness about EMRIP. Another challenge is visas; delegates have trouble getting to meetings. Increasingly the UN is creating spaces for virtual participation to increase numbers. “We are now making use of video submissions. The very first meeting held from Geneva linking to a meeting in Ottawa in Canada was an Indigenous Peoples’ meeting. They blazed the trail—after that the UN started using that more and more. But now, of course, we need to do it within our own Mechanism.” The other major challenge to participation is administrative. “Only NGO’s that are accredited by the UN can now participate in UN meetings. Traditional governments, Indigenous governments, Indigenous parliaments and councils are not organized like NGO’s. They can’t participate unless they work through an NGO. The UN should create new rules to allow for Indigenous Peoples to participate in their own rights. It’s a contradiction for an Indigenous government wanting to participate as a government to call itself a non-governmental organization.”

When asked about the impact of EMRIP and its studies on the ground, Littlechild says, “In Canada when there’s a national chiefs assembly, every single resolution that comes to the floor for debate and decision by the chiefs is always linked with one or more of the articles of the Declaration. They’re beginning to use and express the Declaration in their decision making, and how the study has landed on a particular matter may be reflected in their decisions. For example, right now there’s a national discussion in Canada happening on a First Nations Education Act. Not only is there general human rights law, the Declaration and the Expert Mechanism’s studies that clarify that right are there as well. At the regional level, the Organization of American States has used the Declaration in their decisions. So what’s happening now is the Canadian Human Rights Commission and the Provincial Human Rights Commissions are becoming increasingly engaged in using the Declaration in their decision-making. Also we’re seeing Indigenous Peoples, in their statements of claims or statements of defense, are starting to use the Declaration more and more.” The progress is encouraging, but still, Littlechild says, “We have a long way to go informing our local community about the rights that they have on an international level.”

One of the biggest obstacles for the Expert Mechanism is resources. “Everything we do is voluntary. We need increased resources in terms of research, so we’ve tried to engage universities to become friends of the Mechanism. For example, in London, Grinnell University hosted a study on cultures and languages. And last year Columbia University hosted the expert group meeting on access to justice and truth commissions. Hopefully, that will continue and we’ll have a whole level of expertise in academia that steps forward to help.”

As for the Mechanism’s next study, “We will look at natural disasters that are happening in Indigenous territories; what’s available from the general human rights and Indigenous rights perspective that will inform that study will help us identify what needs to happen for Indigenous communities to have the preparedness for natural disasters, and of course on a more direct level, climate change. As well, there will be a follow-up study on access to justice, as noted above. That’s currently the proposal that is also in the resolution, along with those that I mentioned that will be continued. We have a very busy year.”

The Expert Mechanism encourages Indigenous people to complete their questionnaire on implementation of the UN Declaration on Indigenous Peoples: goo.gl/Pgg4pu.