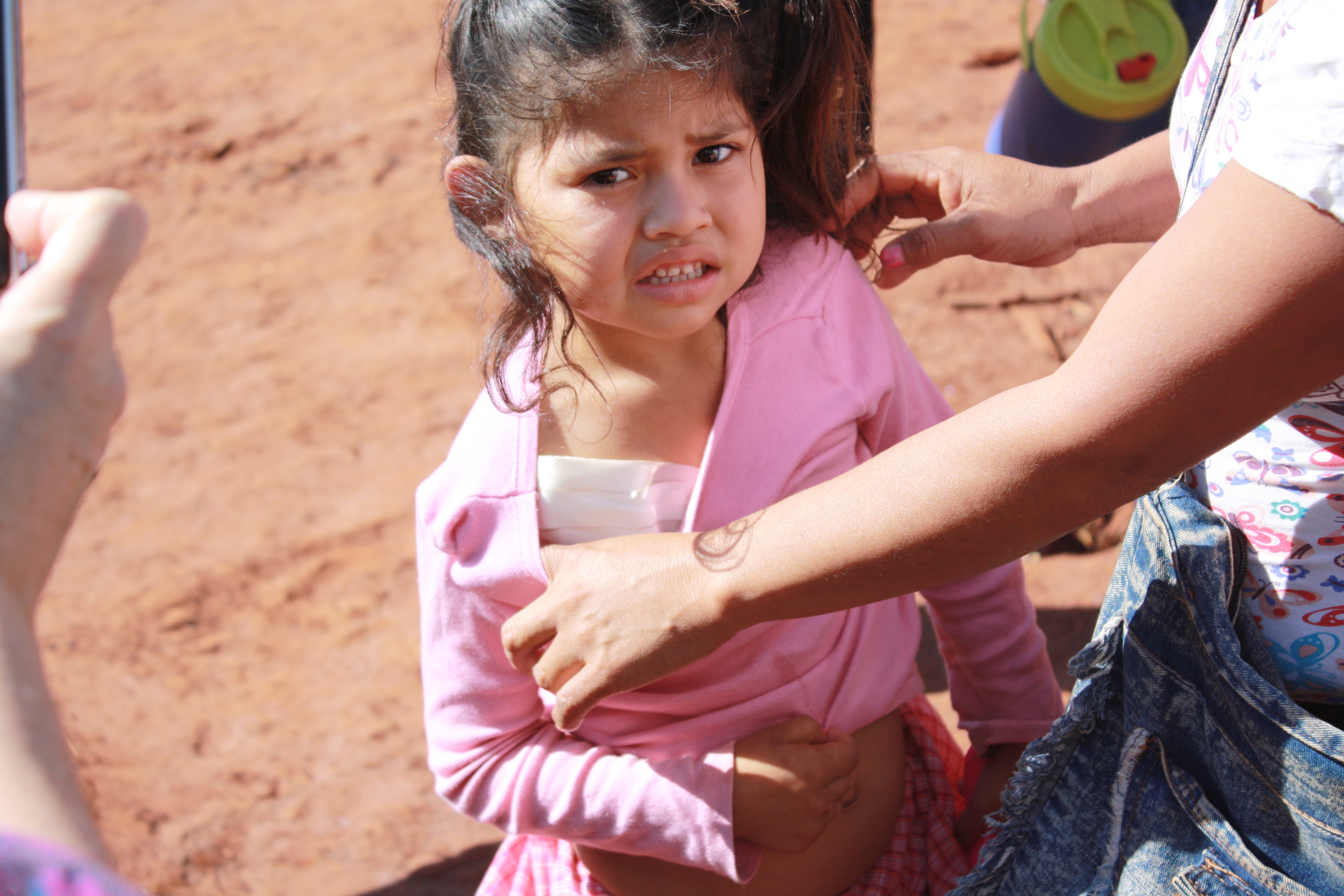 On the morning of May 20, 2014, leaders of the Y’apo Avá-Guaraní community appeared before Judge Silvia Cuevas Ovelar as summoned.  Meanwhile, over 300 heavily armed Paraguayan national police descended upon Y’apo, ruling in hand from the same judge in favor of Brazilian agribusiness Laguna S.A., ordering the relocation of residents and the destruction of their property.  The community was razed while women and children fled to the forest.  Police destroyed everything—houses, the religious center, all religious objects, even personal property—burning everything and leaving nothing but rubbish in their wake. The community was violently attacked again less than a month later on June 15 by more than 50 thugs, armed “private security guards” hired by the owner of Laguna S.A., Brazilian Manfred Peters, who was safely out of harm’s range in Brazil at the time.

Many were injured, including pregnant women, elders, and small children.   One young attacker was killed by friendly fire, though the thugs attempted to frame Avá-Guaraní as the initiators of the violence, claiming that it was their gunfire that resulted in the young man’s death.  Evidence later revealed that the thugs inhumanely fired rubber bullets at close range into makeshift houses where people were huddled in fear and unarmed. The thugs also vandalized and torched their own truck to proffer as evidence of the “savagery” of the Avá-Guaraní.   Avá-Guaraní reported that one of the thugs said to the others, “let’s kill these insects,” as they attacked.  Somewhere along the way, Laguna S.A. desecrated three marked Avá-Guaraní cemeteries, plowing the land for soy and disinterring the bodies of community ancestors in the process.  This story of desecration and violence is all too familiar for  Indigenous and peasant communities in Paraguay and Brazil.

In July 2014, the Federation of Associations of Guaraní Communities of Eastern Paraguay, representing over 50 percent of Paraguayan Indigenous Peoples, submitted its annual report to the Parliament of Mercosur detailing 10 similar attacks on Indigenous communities since 2012, including the most recent events in Y’apo as well as that in Yva Poty in November 2012.  Numerous additional cases might be cited of similarly affected peasant communities in the region, comprised mainly of monolingual Guaraní mestizos who try to distance themselves from their Indigenous ancestry to appear more modern in the eyes of the Paraguayan government.

The Guaraní Federation’s report also details the displacement in the 1970s of hundreds of Guaraní families by the construction of hydroelectric dams on the Paraná River separating Paraguay from Brazil, and by the creation of the Mbaracayú Reserve.  The report details the legal violations involved  in terms of national and international law, as well as the August 2013 National Indigenous Institute’s Resolution demanding compensation for Guaraní communities displaced by these projects.  (These documents, along with photos and statements, including video of the July 9, 2014 testimony of Sister Raquel Peralta before the PARLASUR Commission of Citizenship and Human Rights, are accessible on the CONAPI-CEP website).

One violation of Paraguayan law is the fact that many of the large landholders are foreigners, especially Brazilians, though they are legally prohibited to own such land.  More than 80 percent of the land in Paraguay is now held by 2 percent of the population, revealing the dishonesty of President Horacio Cartes’ “New Direction” policies to eliminate poverty and improve the Paraguayan economy.  In reality, Cartes’ goal appears to be to eliminate the poor, rather than poverty.  Indeed, Cartes has described Paraguay as a “beautiful and easy girl” to Brazilian investors, urging them to “feel at home, and use and abuse her.”  Given Brazil’s historical treatment of its Indigenous people, particularly in terms of the largest group, the Guaraní, it’s no surprise that a culture of intimidation, violence, and erasure of Indigenous voices has shaped Brazilians’ interactions with Paraguayans.

The Guaraní are murdered more frequently than any Indigenous group in Brazil.  According to Conselho Indigenista Missionário (CIMI) in Brazil, there were 319 murders of Guaraní-Kaiowá committed between 2003–2012.  CIMI also reports that more than 500 Guaraní  have committed suicide, and that Indigenous suicides are at a nearly 30-year high nationwide.  CIMI states that President Rousseff’s administration has demarcated fewer Indigenous lands than any since the military dictatorship ended in 1985.  The local media persist in portraying Guaraní as impediments to development.  Many Guaraní leaders have been murdered, including Marcos Veron in 2007, Nísio Gomes in 2011, and film star Ambrósio Vilhava in 2013.  Veron’s son committed suicide.  Still, Guaraní leaders such as Damiana Cavanha, whose community was displaced decades ago and is living by a road in her ancestral land, continue their fight.  Cavanha has recently lost eight community members to automobile accidents and five members of her family, the youngest of whom was four years old.  Rousseff’s administration continues to ignore Cavanha’s pleas for improved traffic signs as the deaths continue to mount.

In the case of  Y’apo, not only was the same judge involved in summoning Guaraní leaders to appear, knowing that they would be unable to act on the community’s behalf during the police destruction described above, but she was also overturning her 2001 ruling against Laguna, S. A..  Another judge had also ruled in favor of Y’apo in 1997.  Ethnographic accounts in the early 1900s locate Avá-Guaraní in Y’apo, documenting Avá-Guaraní historical accounts of Y’apo as the potentially dangerous source of the next great flood (Y’apo means “makes water”) unless Avá-Guaraní continue to repel inundations through responsible management of environmental resources.   Days after the police action, community members danced on the ashes of the community’s religious center appealing to divinity while armed police watched through their scopes from a safe distance.

The illegal assault by the thugs employed by Laguna, S.A., was brutal.  Paraguayan due process was violated, 14 Avá-Guaraní were injured, including an elderly man who lost an eye, a pregnant woman who was beaten and subsequently miscarried, a 5-year-old girl who was shot in the chest, and a 12-year-old girl who has an inoperable rubber bullet lodged close to her heart and may lose her arm. Community members warily hope for justice, as members of Yva Poty still await compensation two years after the attack on their community. Additionally, Brazil boasts the highest rate of murders of environmentalists, including Sister Dorothy, tireless advocate of Indigenous peoples.  Also notable are the continued efforts of Brazil and multinational corporations such as FIFA to censor Indigenous voices.  The attack on Y’apo suspiciously commemorates the two year anniversary of the infamous tragedy in Curuguaty, in which 17 people were killed in a similar police dislocation of peasants.

Still, there is reason for optimism. Judge Carlos Goiburú Bado, who was responsible for the dislocation of Avá-Guaraní in Yva Poty in 2012, was suspended by the Paraguayan Supreme Court on July 8.  While it is unclear why he was suspended, he was warned in June 2013 over his ruling in that case. Official demarcation and enforcement of relevant laws regarding indigenous lands undergirds all of this.  At the opening ceremony of the 2014 World Cup, 13-year-old Guaraní boy, Jeguaká Mirim, held up a banner stating “Demarcation Now!”  This was censored by FIFA, doubtless with the compliance of media and the Brazilian government.  Nevertheless, with both ethics and law on their side, resilient Guaraní peoples continue to fight for their human rights in their ancestral lands despite the seemingly insurmountable odds.

--Eric Michael Kelley is a lecturer in anthropology at UMass Boston.