Xavante Leader Demands Compliance with Free, Prior and Informed Consent at the United Nations 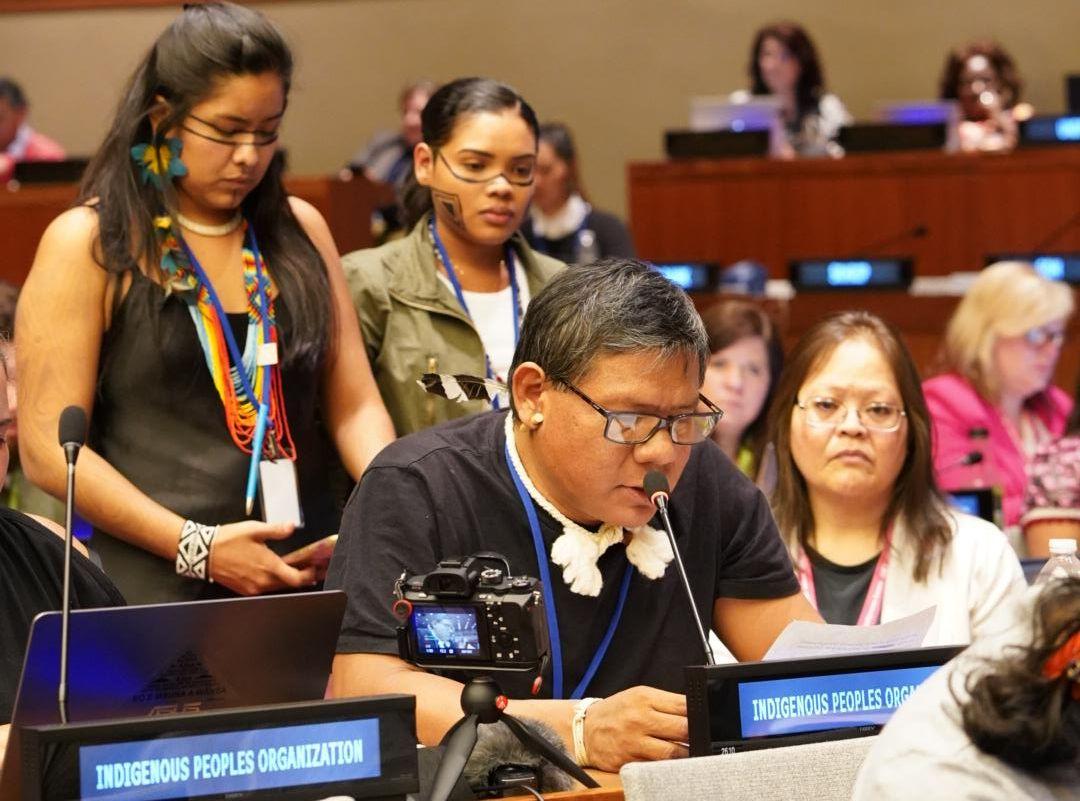 With support from Cultural Survival, Tribal Link Foundation and generous donors, Xavante leader, Hiparidi Top’tiro of the Xavante Warã Association, spoke at the 17th Session of the UN Permanent Forum on Indigenous Issues about the grave problems A’uwẽ-Xavante people are confronting as a result of massive soy agribusiness in central Brazil.  In meetings facilitated by Cultural Survival, Top’tiro also met with various government missions to the UN including the Netherlands, Norway, and Germany – all major soy importing nations that indicate concern over Indigenous human rights violations in Brazil -- to bring attention to the negative impacts of industrial soy agriculture and associated mega-development projects on A’uwẽ-Xavante and Brazil’s failure to implement Free, Prior and Informed Consent (FPIC).  Top’tiro also discussed the A’uwẽ-Xavante case with Brazil’s UN ambassador and other Brazilian diplomats.

The A’uwẽ-Xavante leader aimed to focus international attention to the threats posed by the construction of highways, railroads and water highways in or adjacent to A’uwẽ-Xavante lands, and specifically the destruction of the ancient village site of Tsõrepré, the birthplace of Xavante people, that will result from the construction of federal highway BR-080.  He noted that these mega-projects, which benefit soy producers, present major threats to Indigenous people and lifeways.  Top’tiro seeks to stimulate greater dialogue concerning these issues with the Brazilian government and international partners.

Top’tiro’s intervention, which he delivered in Portuguese on April 18, 2018 in “Item 10: Human Rights. Dialogue with Special Rapporteur on the Rights of Indigenous Peoples,” was translated into all of the official UN languages.  The following is an English transcript of his statement.  Spanish and Portuguese transcripts can be found here.

My name is Hiparidi Top’tiro.  I am a member of the A’uwẽ-Xavante nation from Mato Grosso, Brazil’s leading soy exporting state.

We are a cerrado people with a population of 25,000.  We live surrounded by agribusiness in eight small territories.   Soy is planted for export, to benefit Asia and Europe, and has brought a series of grave problems to my people.   Agribusiness is destroying our world: the Ró.  Ró is the cerrado and all of the beings that live within it.  It is the source of our strength.

Agribusiness doesn’t just destroy the forest that surrounds our territories.  It pollutes the rivers where we perform our rituals, that we bathe in, and the water we drink.  It contaminates the air.  Because of this, agribusiness is destroying our dreams, the source of our spirituality and our future.  Agribusiness contaminates the animals we eat and the game that is essential for our rituals.  Without game, we cannot perform our wedding ceremonies.  Agribusiness unbalances the world, the Ró, and threatens the very existence of A’uwẽ people.

Agribusiness doesn’t come by itself.  It is supported by a series of mega-projects.  It brings highways, railroads, and hydroelectrics.  The construction of these projects brings even more devastation for A’uwẽ people.  In the last two years, for example, 10 Xavante have died run over on highways that cut through our lands (BR070 e BR158).  New projects that are planned will cause more people to die.

The government supports the construction of mega-projects in our territories, whether these are demarcated or not. It is destroying our sacred sites and failing to uphold its obligation to Free, Prior and Informed Consent (FPIC, UNDRIP, OIT 169).

Agribusiness benefits only a small part of the Brazilian elite and consumers in Europe and Asia.  It is decimating the Ró and the A’uwẽ. Is this just?

Because of the, I recommend and request that one or more members of the Forum, or of the Expert Mechanism:

1. come to Brazil and visit all A’uwẽ-Xavante territories in Mato Grosso;

2. and carry out a study on the effects of agribusiness on the lives of the A’uwẽ people of Mato Grosso and of other Indigenous Peoples who live in the cerrado.

We also request that the Brazilian government suspend all mega-projects, including the BR-080, BR-242, the Centro-Oeste Railroad (FICO),  until it obtains Free, Prior and Informed Consent through a process that respects our ways of making decisions in the Warã council.

We also ask that the government uphold its commitments with respect to the existing federal highways BR-070 e BR-158 that cut through our lands, by installing road signs and speed limits, and fully implement the Basic Environmental Plan, thereby guaranteeing our rights.