We will not be silenced: Indigenous Peoples Triumph in Nicaraguan Elections-- A Statement by Brooklyn Rivera 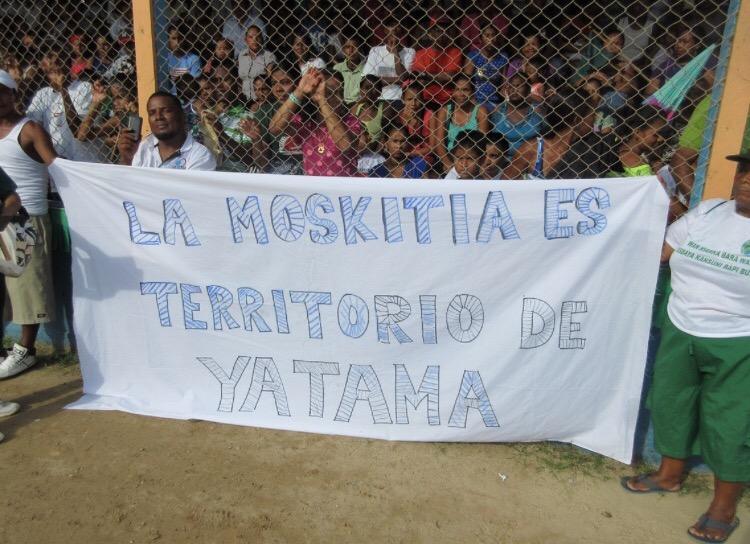 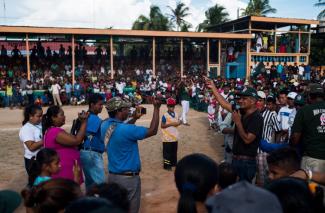 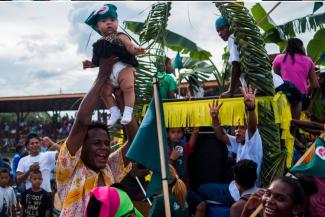 At the end of 2016, a small Indigenous political party, Yatama (Yapta Tasbi Masraka Nanih Aslatakanka/Sons of Mother Earth), achieved a victory in the Nicaraguan general elections and effectively confronted the dictatorial Sandinista state.

Everyone knew that Daniel Ortega, the perennial candidate of the Sandinista National Liberation Front (FSLN) party, would win the presidential election. There were no real opposition candidates and Ortega, alongside Rosarillo “Chayo” Murillo, his hugely popular wife and vice-president running-mate, had over half the country’s support. As expected on November 6, 2016, Daniel Ortega was elected to his fourth overall and third consecutive term as President of Nicaragua.

A much more interesting battle in the general elections took place on the Caribbean Coast. Here, Yatama was running as an independent party for the first time, the only opposition party to the FSLN in the region. Yatama was hoping to send one or more regional candidates to the National Assembly, with five candidates (two Miskitu; two Kriols; and one mestizo) running for assemblyman in the North (RACCN) and South (RACCS) Caribbean Coast Autonomous Regions. However, everyone’s attention was focused on one candidate from the North: Brooklyn Rivera.

Rivera was both son and the highest leader of the Miskitu Nation. Rivera rose to power during the US-backed Contra War within the Sandinista revolution (1979-1990), and he used his position as a Contra military leader to fight for the Indigenous and Afro-descendant people’s regional autonomy. The Sandinista state passed the autonomy law (Law 28) in 1987, establishing two pluri-ethnic autonomous regions on the Caribbean Coast, the same year Rivera founded Yatama and became its long-term director.

In 2007, Rivera (Yatama) made an alliance with Ortega (FSLN) that enabled him to serve for eight years as an assemblyman in the Nicaraguan National Assembly and as President of the Comisión de Asuntos de los Pueblos indígenas, Afrodescendientes y Regímenes Autonómicos. A year after Rivera broke the alliance in 2014, the FSLN-controlled assembly illegally deposed him. The assembly majority leader accused, tried, and found Rivera guilty of selling Indian lands, thus, criminalizing Nicaragua’s most respected and renowned Indigenous leader.

Instead of this ending his political career, Rivera became stronger. The Caribbean peoples began to view him as a political martyr, a scapegoat used by the FSLN to disguise their own involvement in the internal colonization and the invasion of Indian lands. Now Rivera was back in 2016, running as an independent Yatama candidate. This would be quite a story if he could win back his legislative seat.

At the Yatama campaign’s grand finale march in Puerto Cabezas-Bilwi over 10,000 people took to the streets where the local population numbers around 50,000. The growing support base for Yatama included new Indigenous and ethnic supporters (Indigenous Miskitu, Mayangna, and Rama; Afro-descendant Kriols and Garifuna; and Native-born mestizos). Some were opposed to the FSLN-approved, Chinese-backed inter-oceanic canal set to cut through Rama and Kriol territories. Many more were motivated to join Yatama because of the current land crisis on the Caribbean Coast.

Mestizo colonists from the Pacific, seemingly unaware of Nicaraguan communal property law (Law 445), have illegally purchased titles and settled nearly half of the Indigenous and Afro-descendant ancestral lands. Miskitu people have organized in defense of their territories and now engage in periodic armed-conflicts with mestizo colonists near the middle-Rio Coco region. Most of the violence revolves around saneamiento (part of Law 445), which calls for the removal of all colonists and outside industries from Indigenous and Afro-descendent lands.

Confidencial reported that since September 2015, colonists have killed 33 Miskitu men, injured 47, and kidnapped three with impunity. Most contentious was the Sandinista youth’s killing of Yatama leader Mario Leman, and still today, justice has not been served. The Sandinista government continues to look the other way and has not provided protection to Indigenous people or support to the 3,000 Nicaraguan Miskitu refugees that fled to Honduras.

On the night of Sunday, November 6, election results on the Caribbean Coast indicated that at least one Yatama candidate—Rivera--had won an assemblyman position. Yatama planned a peaceful victory march the next day for their candidate. The victory march turned violent, as Yatama officials accused the FSLN of stealing at least one assemblyman position in the RACCN by voter fraud. The next day, one-hundred crowd control police arrived from Managua. Bilwi became militarized over-night. In the end, the FSLN allowed only Rivera (Yatama) to take a seat in the National Assembly.

Below is the statement by Rivera, giving historic context to his victory as an independent candidate and to Yatama’s fight for representation at the national level.

The Indigenous and Afro-descendant peoples of the Nicaraguan Miskitu Coast, who reside along the Caribbean Coast, represent about 5% of the national population. Although they elect their leaders in community assemblies, they also participate in Nicaragua’s electoral processes, at the municipal, regional, and national level. Yatama began in 1990 as an Indigenous organization, with formal leadership, a party logo, candidates in elections, and a ballot box (casillo 8). In 2000, Yatama became a political party, and it remains so today.

Since the armed conflict in the country, Yatama has made consistent advances and gains in the country’s electoral processes at all levels, even though Yatama has been at a major disadvantage, without consistent, loyal national alliances and as always, beneath the control of the Supreme Electoral Council (CSE).  In the Nicaraguan general elections of 2001, Yatama had no alliance with a national party and failed to win one seat in the National Assembly. This reveals how both Sandinista and Liberal parties [from both the political left and right] have dominated the Indigenous and Afro-descendant peoples of the region, since the so-called ‘reincorporation’ of Muskitia imposed from Managua in 1894. In this way, we have been invisible, forced to vote for national parties, absent from an authentic fight for our agenda in the national parliament.

In the last national elections of November 2016, Yatama was called on to challenge the ruling national party, and we were at a great disadvantage in competitive strategies with the FSLN. This disadvantage was caused by our decision to run as an independent party after the ‘Mario Leman’ Assembly, when the people decided to ratify the breaking of the alliance with the FSLN. Yet unfortunately, we later were not able to make an alliance with national political parties like PLI or PLC. We were all alone.

Without clear direction regarding Yatama’s running as an independent party, we proceeded forward. Our movement spontaneously ignited the spirit of the people. The people’s enthusiasm took over in the communities. As such, we became a regional political force participating on the national stage, in a battle to open a space and give representation to Indigenous Peoples. We had begun to challenge the powerful and hegemonic Sandinista state.

To confront the state, we stressed our common history and cultural and regional identity, and the rights and goals of our Muskitia homeland. Yatama officials began to work at the community level to include the political participation of Indigenous community members, who were formerly excluded from voting process. Common themes that motivated our supporters were the problem of the colonists; the killing of Mario Leman; and my ousting from the National Assembly. These themes were viewed by the people as part of the national government’s anti-Indigenous policies.

In the recent elections, our Indigenous movement faced serious voting obstacles. FSLN voters were provided a clear path to vote, even multiple times, while the FSLN arbitrarily excluded our supporters at the voting precincts, so that they could not vote--the FSLN changed the voting precincts of many Yatama supporters, whose names were missing from the registries. Voting identification cards also were channeled toward FSLN youth, while they were denied to Yatama supporters. Additionally, the placement of our ticket, buried at the end of the voting ballot, confused Yatama sympathizers and encouraged them to mistakenly vote down ticket, following the FSLN party-line, effectively nullifying their vote.

In these ways, the FSLN minimized our vote and stole at least one assemblyman position from Yatama in the RACCN. We had shown the popular support for the Indigenous movement during the Yatama campaign finale march on November 2 and in the Bilwi and Waspam voting precincts. The votes we garnered represent the demands of the people for saneamiento of the colonists illegally occupying our Indigenous and Afro-descendant territories; and for justice in the name of Mario Leman; and for my expulsion from the National Assembly. In these ways, the election results show the fortitude and growing strength of the Indigenous and Afro-descendant peoples’ leadership and demands. And we will not be silenced.