Victory in the Release of Guatemalan Political Prisoner Rigoberto Juarez 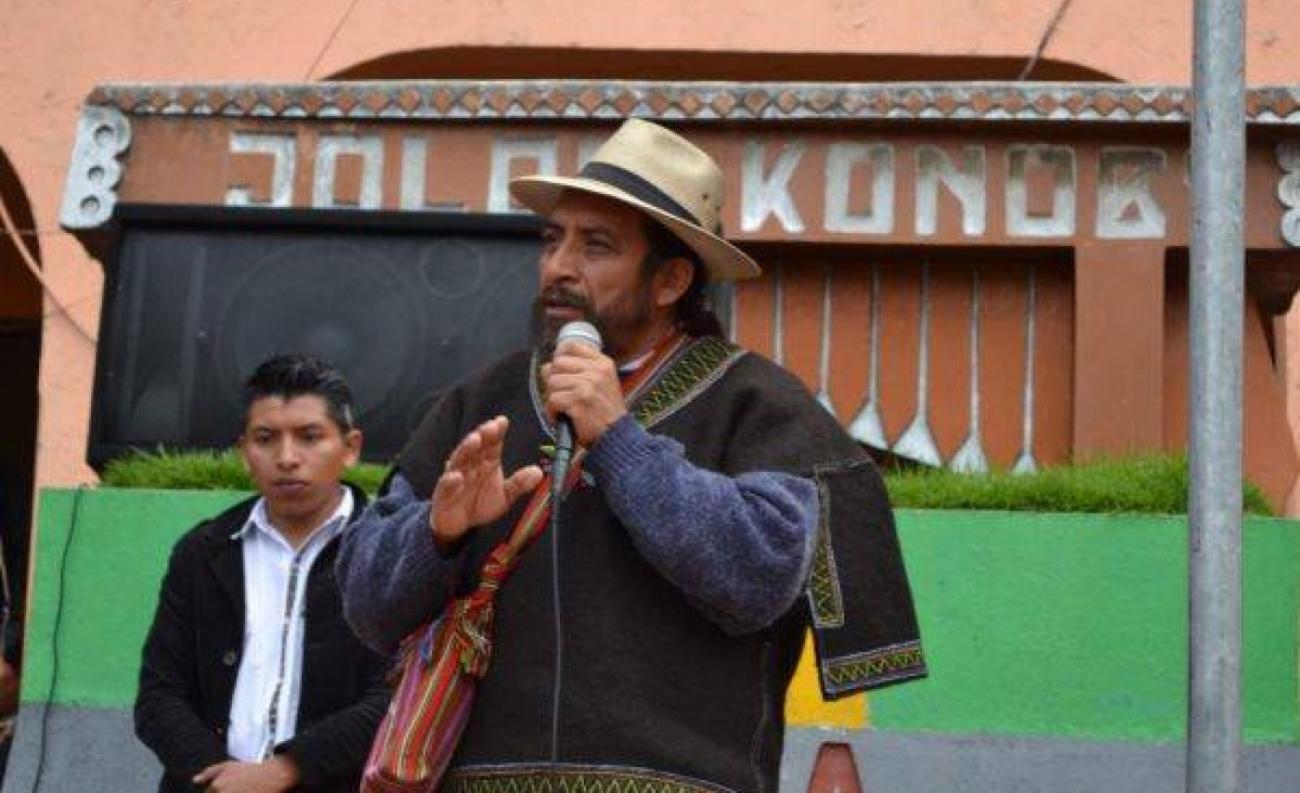 July 22, 2016 marked a day of victory, not only for Rigoberto Juarez Mateo, but also for the Indigenous Q’anjob’al Maya community in the municipality of Santa Eulalia, Huehuetenango, Guatemala. In a split decision made by Judges Yasmin Barrios, Patricia Bustamante, and Gerbi Sical, seven Ancestral Authorities, including Rigoberto Juarez, Domingo Baltazar, Ermitano Lopez Reyes, Sotero Adalberto Villatoro, Francisco Juan Pedro, Mynor Lopez, and Arturo Pablo were released from prison, five of whom were acquitted of all charges.

Sixteen months ago, Rigoberto Juarez, one of nine Ancestral Authorities, was detained for his advocacy against two private hydroelectric and mining companies, Hidra Energia and Hidro Santa Cruz, respectively, for their failing to comply and consult with Indigenous communities’ prior to accessing licensure for their projects. Posing a threat to their natural resources, land, and way of life, those who resisted the projects faced threats, coercion, and were sometimes kidnapped, raped, or even murdered. Rigoberto Juarez and Domingo Baltazar, two well-known Indigenous leaders, traveled to Guatemala City to file reports on these various human rights violations to the Department of Public Ministry and the United Nations Commission for Human Rights but both were arrested by police without warrant or charges. They were illegally imprisoned without due process on that day of March 23, 2015. Rigoberto Juarez was placed in High Risk Group A preventive detention center for false accusations in a series of crimes which the private companies claimed against them. Sixteen charges were then made against him, including public disturbances of peaceful demonstrations, kidnapping, and intent to commit crimes. However, the lack of evidence and factual grounds for the heinous charges that were made only indicate that the hydroelectric and mining companies, working with the Mayor and judicial system of Guatemala, strategically organized the persecution and arrest of the community leaders in order to remove their voice and actions from the resistance movement he had begun and committed to since 2008.

The “Gobierno Plurinacional,” or the Plurinational Government, represents at least five distinct Mayan communities  in Huehuetenango that stand in solidarity for the “defense of territory and life.” For sixteen months, the movement’s primary focus was forced to shift from stopping these private companies from infiltrating their village to finding justice in a corrupt judicial system. Despite such setbacks, Rigoberto Juarez was able to empower and mobilize through the community radio station, Snuq Jolom Konob, which was re-inaugurated this year. Now with his release, the Indigenous communities of Guatemala have gained a stronger leader who continues to mobilize his community. But while Rigoberto’s freedom signifies a great overcoming, the Mayan community of Maya Q’anjob’al and others understand that the struggle continues. Free, Prior Informed Consent (FPIC) must be properly implemented and enforced. Government officials must be held accountable for their crimes and the justice system of Guatemala must be reformed to prevent further corruption. Judge Jazmin Barrios, who ordered his release due to the clear indication that he was criminalized for being an outspoken Mayan leader and human rights advocate, has displayed honour and protection for the vulnerable. In a press release from YAJABIL PAYXAILBOM KONOB’ Akateko, Chuj, Popti’, Q’anjob’al, the Ancestral Government of the Akateko, Chuj, Popti and Q’anjob’al Maya Nation in  Huehuetenango Guatemala, Judge Barrios was thanked, as well as the Fiscal General and the Director of Public Ministry with the support and assistance of CICIG (International Commision Against Impunity in Guatemala), who continue to thwart crimes against humanity. Having been visited by seven Nobel Prize winners this year, Rigoberto Juarez’ release marks a new triumph for human rights activism in Latin America and around the world. On June 30, 2016, hundreds of supporters gathered in Huehuetenango to await and welcome the seven recently released Ancestral Authorities travelling by caravan to express their gratitude and join them in the capital city’s central park for a special Mayan ceremony. On June 31st, the caravan travelled through Chimaltenango, Tecpan, Los Encuentros, Solole, Cumbre de Alaska, San Juan Ixcoy, Santa Eulalia, and Santa Cruz Barillas where hundreds and thousands celebrated and stood in solidarity in the continued fight for their rights; that to defend life, water, earth, and land is not a crime.