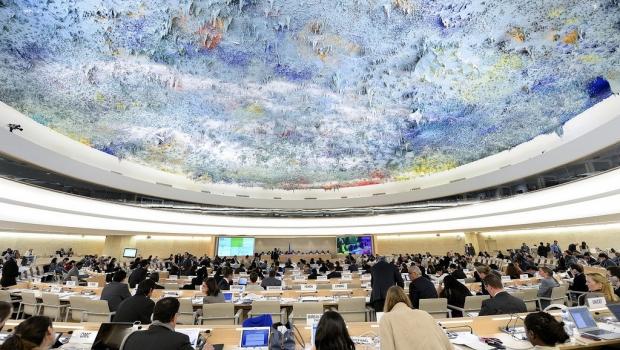 In October 2019, Cultural Survival submitted a report on the state of Indigenous human rights in the United States as part of the 36th Session of the United Nations Universal Periodic Review, a process by which UN member States have the opportunity to review fellow States’ human rights records and make recommendations.

The United States’ review took place on November 9, 2020. Its representative led its statements by saying the country is “immensely proud of our human rights record,” an egregious but not surprising denial of the violations enumerated in Cultural Survival’s report, in fellow States’ reviews, and beyond. Several States offered recommendations relevant to Indigenous Peoples in the United States, some of which reflected the content of Cultural Survival’s report (full list below). Japan, Kazakhstan, and several others recommended that U.S. ratify Convention on the Elimination of all Forms of Discrimination Against Women (CEDAW), the Convention on the RIghts of the Child (CRC), and the Convention on the Rights of Persons with Disabilities (CRPD ) “as soon as possible,” an affirmation of Cultural Survival’s recommendations. Various countries recommended that the U.S. take steps to minimize violence by law enforcement officers. Native Americans in the U.S. are more than three times more likely to be killed by police than white Americans. Four States —North Macedonia, Kenya, Paraguay, and Azerbaijan— made specific recommendations mentioning Indigenous Peoples.

Paraguay recommended that the U.S. “pursue free, prior and informed consent with Indigenous communities as regards the potential impact in their areas in step with numerous SDGs,” a fundamental principle enshrined in the UN Declaration on the Rights of Indigenous Peoples, which the Obama administration adopted in 2011, but which the U.S. has not successfully implemented in the almost decade since. Kenya’s recommendations included to “implement deliberate strategies to reduce the gap between African Americans and the rest of the population, as well as between the Indigenous and non-Indigenous populations and hence reduce structural and institutional discrimination.” Azerbaijan recommended that the U.S. address housing and sanitary problems faced by marginalized communities, including Indigenous and migrant communities. Peru called for the U.S. to allow human rights defenders of immigrants to do their work freely and to put an end to punitive family separation policies, an essential complement to Cultural Survival’s criticism of family separation at the U.S.-Mexico border and our demand for language justice in the services provided to Indigenous language speakers in immigration detention.

Several of the points Cultural Survival’s report centered were reiterated by the various recommendations, yet many were not. The UPR process compiles stakeholder reports into a brief summary covering a broad range of human rights issues, which are then provided to the State representatives to review prior to the meeting of the session. In this review, 73 individual reports and 65 joint reports from civil society were submitted. Joshua Cooper, Executive Director of the Hawaii Institute for Human Rights, lecturer at the University of Hawaii, and Dean at the Global Leadership Academy for a human rights advocacy in Geneva, Switzerland, describes meeting with different countries' embassies in Washington, DC, and and at the UN missions in New York and Geneva prior to the UPR, so that in addition to submitting reports, Indigenous voices were brought directly to these representatives. While not all demands were named by member states during the hearing, they remain fundamental steps to achieving justice and sovereignty for Indigenous Peoples in the United States

Cultural Survival acknowledged that its report was “not comprehensive and only briefly touches upon some issues Indigenous Peoples face that are emblematic of deep-rooted systemic discrimination and injustice.” It is framed in the context of over 500 treaties between the United States government and Native American nations signed between 1778 and 1871, all of which have been violated. The report discussed the issue of federal and state recognition, which reserves certain rights for specific Tribal Nations according to their ability to prove that they meet conditions, a discriminatory, colonial, and sometimes decade-long process. It highlighted land and resource rights violations in the New England area and nationally, specifically several cases of denial of access to ancestral lands and burial grounds and rejection of land claims in several cases, as well as high profile cases like the Dakota Access Pipeline and the criminalization of protesters such as those resisting the pipeline at Standing Rock in 2015. Cultural Survival also emphasized the historical trauma resulting from Indian Boarding Schools, to which Euro-American settlers forcibly removed Indigenous children from their families for over a hundred years and whose impacts continue to reverberate through Indigenous communities in innumerable ways, including, as the report noted, continued policies of removal through new institutions such as the foster care system.

Cultural Survival also highlighted the ongoing crisis of Missing, Murdered, and Trafficked Indigenous Women (MMIW, also written as MMIW2S to recognize the impacts of the crisis on Two-Spirit and LGBTQIA+ Indigenous people). At the end of the UPR hearing, the United States responded to the previous presentations. United States Deputy Assistant Attorney General, Alexander Maugeri, reported that the U.S. is working to “end violence disproportionately affecting American Indian and Alaska Native communities. In November 2019 President Trump signed an executive order establishing a task force on Missing and Murdered American Indians and Alaska Natives.” While some Indigenous individuals have expressed support for the order, others have critiqued it because of the observation that the president himself is undermining its efficacy. Other critiques include that the administration has failed to consult Indigenous Peoples on the issue and that the initiative is underfunded and a political ploy.

Finally, U.S. Department of State Acting Legal Advisor Marik String reported that the U.S. “reaffirms its support of the UN Declaration on the Rights of Indigenous Peoples, as explained in our 2010 statement of support” and that it supports the recognition that Indigenous Peoples are entitled to both individual human rights recognized in international law and additional collective rights owed to them as Peoples. He claimed that, in compliance with laws requiring consultation with Tribal Nations, “multiple consultations with Tribal leaders are held each year on activities and policies affecting tribes or Tribal lands. The reestablished White House Council on Native American Affairs coordinates development of policy recommendations to support Tribal self-governance and improve the quality of life for Native Americans. With respect to cultural property, the United States is committed to supporting efforts by Tribes and individual Native Americans to recover ancestral remains as well as sacred and ceremonial cultural property that has been stolen, looted, or trafficked.”

The UN General Assembly established the Universal Periodic Review (UPR) along with the United Nations Human Rights Council on March 15, 2006. Its role is to review the human rights records of the 193 UN member States, addressing the States’ obligations to respect, protect, and fulfill human rights, and to provide technical assistance to the States being reviewed. Over the course of a 4.5-year cycle, all member States are reviewed. Three sessions are held per year, with 14 countries reviewed per session for a total of 42 countries reviewed each year.

Cultural Survival’s stakeholder report for the 36th session of the UPR called upon the US government to accept and implement the following recommendations:

1. Implement UNDRIP and incorporate it into domestic policies and laws

2. Reexamine treaties signed with Tribal Nations and set up commissions to find ways they can be implemented in today’s circumstances in line with UNDRIP

3. Implement National Congress of American Indians’ plan for a streamlined process for federal acknowledgement and work with its Federal Recognition Task Force to address the interests of all Tribes, both federally and non-federally recognized.

5. Reauthorize the Violence Against Women Act which is stalled in the Senate

6. Pass the Not Invisible Act of 2019, H.R. 2438, to address the crisis of missing and murdered Indigenous women, establishing an advisory committee on violent crime.

9. Set up national and State truth and reconciliation commissions based on the example from Maine and work on reparations to survivors and families.

11. Work with Tribes to ensure all Native Americans have access to voting.

12. Pass the “For the People Act” (H.R. 1 / S. 949)—to improve voter turn-out including provisions to promote automatic voter registration; same-day voter registration; early voting; voting by mail; the re-enfranchisement of ex-felony offenders; an improvement in provisional ballots; while at the same time prohibiting voter caging, voter deception and voter intimidation.

13. Enact the “Voting Rights Advancement Act” (H.R. 4 / S. 561) to ensure that last-minute voting changes do not adversely affect voters; to protect voters against discrimination, and to expand the Federal Observer Program; and improve voting rights protections for Native Americans and Alaska Natives.

15. Disaggregate data at the border to recognize the ethnicity of Indigenous migrants, and devote resources accordingly.

16. Reverse the inhumane policy of separating children from parents at the border and provide a mechanism for redress.

The next step in the UPR process is the adoption  by the U.S. of the recommendations made by States at the upcoming Human Rights Council session scheduled for February and March 2021.

For a video of the entire U.S. UPR hearing, click here.