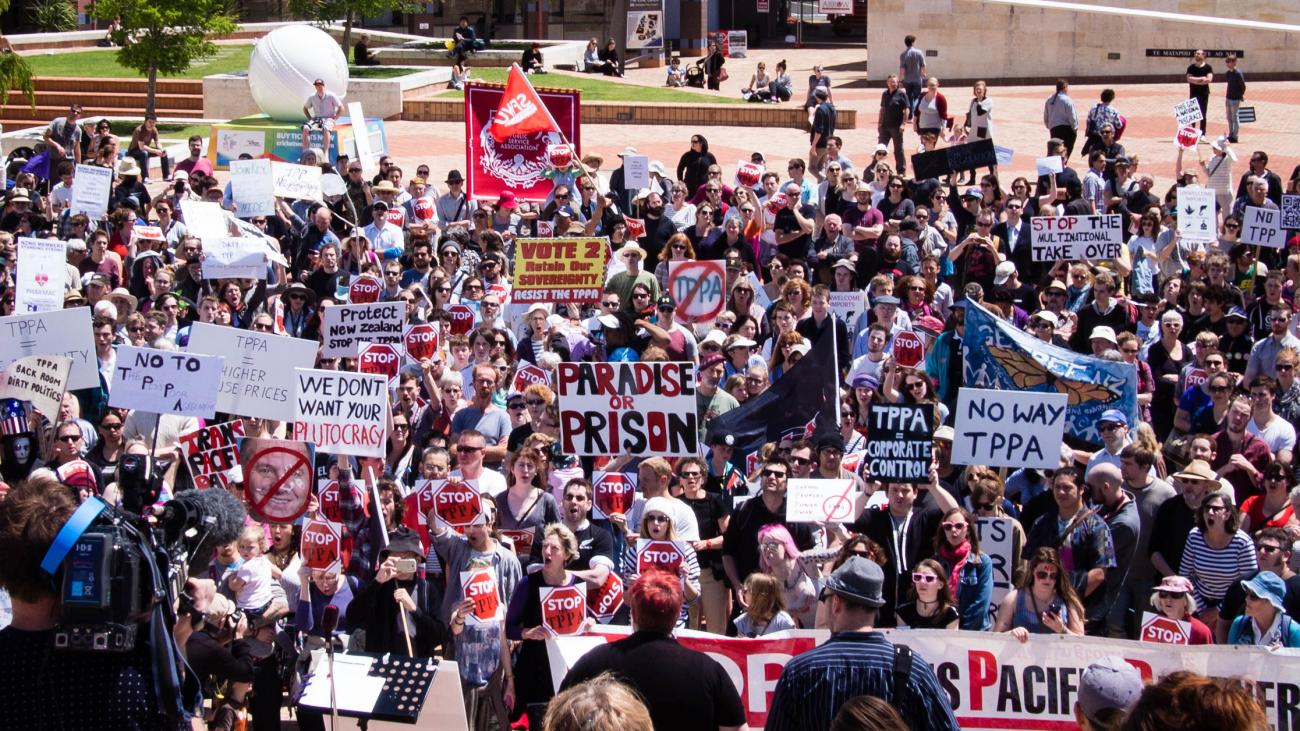 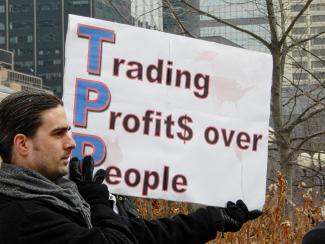 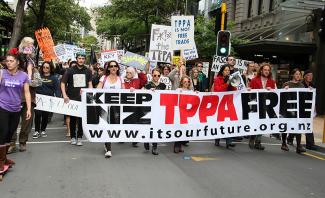 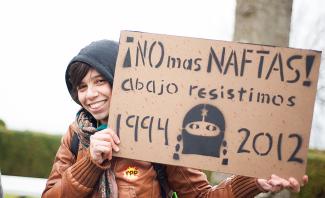 The Trans-Pacific Partnership has taken another step forward today as trade representatives from 12 countries concluded negotiations for the deal. The TPP will be the largest trade deal in history,  affecting forty percent of the world’s economy.  Yet the text of the deal has remained hidden from the public, despite corporate advisors and interest groups being closely involved in the drafting of the text.

Through the deal has been developing since 2008, the public will never have a chance to give input into the text, only a yes or no vote to approve or shut down in congress.  This is a result of the TPA ‘’Fast Track” law passed in June 2015.  US Congress voted to approve a legislative authority to “fast-track’’ trade deals, ensuring that Congress can only have an up-or-down vote on the trade deal, rather than opening up and amending specific provisions which could delay or kill trade deals that are on a rushed timeline.  Fast Track and the TPP deal have been a major priority for President Obama, despite strong opposition his base and from most of the Democratic party,  including Senate Democratic Leader Harry Reid (NV), House Minority Leader Nancy Pelosi (D-CA), and vocal disapproval by Sen. Elizabeth Warren (D-MA) during discussions in the Senate.  The next step in the process will be to send the bill to pass the TPP to the US congress for approval or rejection, and the Obama administration and Republicans are pushing hard for its approval.

But the implementation of the TPP is not yet set in stone. It will depend on passing laws in all 12 countries that are negotiating the deal.   Australia, Brunei, Canada, Chile, Japan, Malaysia, Mexico, New Zealand, Peru, Singapore, and Vietnam all need to pass the TPP through their own domestic legislatures.  There is a growing grassroots movement opposed to its passing, including environmental groups, farmers, feminist groups, tech companies, consumer advocates, Asian-American and Pacific Islanders, LGBTQ communities, cancer patients, and Indigenous Peoples.

Indeed, the deal will have major impacts on Indigenous Peoples within the 12 countries. Topics of major concern among Indigenous communities include:

Corporate Rights over Human Rights
The agreement would ramp up trade policies that have allowed for transnational corporations to engage in oil, gas, and mineral extraction without the Free, Prior and Informed Consent of their communities, especially the natural gas fracking industry.

Corporate Power to Sue over Lost Profits
The deal would give power to corporations to sue governments in secret tribunals. The clause, known as ‘investor state dispute resolution’ (ISDR), allows foreign corporations to sue governments if they pass public interest laws that infringe on the capacity of corporations to profit.   An example of this played out in Ecuador.  When the Ecuadorian government cancelled the licence of US oil company Oxy Petroleum after years of campaigning from Indigenous communities and civil society, Oxy used a form of the Investor State dispute resolution to be awarded $1.8 billion dollars plus interest for their “losses’’.

Mother Nature®
The draft chapter on ‘Trade and Biodiversity’ recognizes the rights of states over natural resources and genetic material. This would allow for multinational corporations exclusive rights over things like seeds and traditional plant-based medicines found in biodiverse areas managed by Indigenous communities.

Passing the Bill on Environmental Clean Up
The TPP would also allow companies to evade financial responsibility for environmental contamination, even when it occurs on Indigenous Peoples lands. Under the TPP, investors would have the ability to demand taxpayer compensation for imposed fines, effectively burdening the public with the cost of environmental cleanup

Indigenous communities have come out in opposition to the plans, parts of which were leaked by WikiLeaks in 2013.   Māori activist Te Kaituhi, of Aotearoa New Zealand, explained, “The TPP won’t only affect Indigenous freehold land, nor will it just push our people further into poverty. The TPP will give multinationals the right to exploit the ecosystem and further aid them in the acquiring of enforced trademarking and copyrighting of Indigenous intellectual property and cultural or traditional knowledge;” “Imagine a world where Indigenous knowledge, language, and customs are outright owned by multinational corporations and copyright enforcement is heavily backed by government police forces.”

If history is any indication, opposition is likely to mushroom among Indigenous communities in Peru as well. In 2009, thirty-two Peruvians died and hundreds were wounded in the infamous Bagua massacre, when police opened fire on Indigenous Peoples protesting the implementation of US-Peru Free Trade Agreement (FTA) terms providing new access to exploit their Amazonian lands for oil, gas and logging.  Peruvian security forces attacked several thousand Awajun and Wambis protesters, including many women and children, who were blocking  a jungle highway near Bagua, 600 miles north of Lima. The protesters were demanding revocation of decrees enacted to conform Peruvian law to FTA requirements.  Wikileaks later revealed Peru acted to violently shut down the protests due to intense US pressure in order to move the trade deal forward.  The Trans-Pacific Partnership deal is likely to be no different.

What can you do?