A Summary of the Guatemalan Genocide Trial 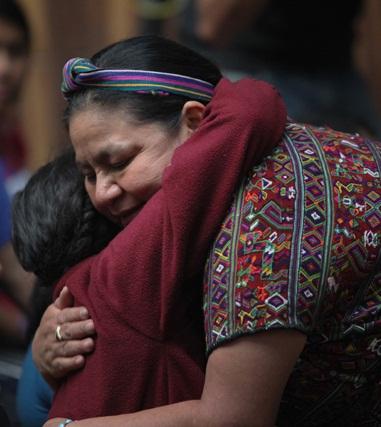 Over the last month, the historic trial has been moving forward in Guatemala’s High Risk Court charging former Head of State Efraín Ríos Montt and former Head of Military Intelligence José Mauricio Rodríguez Sanchez with Genocide and Crimes Against Humanity. The victims have waited for over 30 years for justice to be served for the atrocities committed against Guatemala’s indigenous people, and finally, a verdict is in sight.

Thanks to all of our supporters who sent an email to U.S. Ambassador Arnold Chacon asking him to attend the genocide trial. Although the trial began on March 19, the US Ambassador didn’t make an appearance in the courtroom until April 9th. The following day the Embassy finally broke its silence regarding the trial and issued a press release reiterating the importance of justice for reconciliation in Guatemala. The press release also expressed the US’s support for justice processes which are “credible, independent, transparent and impartial,” and exhorted “all Guatemalans to respect the legitimacy and integrity of the process.”

For example, on the first day of the trial, Ríos Montt arrived with a new attorney, supposedly hired that very morning who demanded that the trial be delayed to allow him time to prepare. The attorney then requested that the Judge Yasmin Barrios recuse herself. The judge declined, and in the afternoon, after several further disruptions by the defense attorney, requiring his removal from the courtroom and the case, the testimonies began.

In the words of one survivor, Javier Sicilia, “A victim is someone who has come back from death to a world where they don’t fully belong.”

Each victim painfully recounted the very personal horror they lived. One hundred stories were shared of watching loved ones slaughtered, of being run out of homes, often to starve in the wilderness and of being rounded up into internment camps and forced into civil defense patrols.

In her testimony, Rosa Santiago described the massacre of 96 people on April 3, 1982. She testified that soldiers forced her farther and others into a church, hacked them to death with machetes, and threw their body parts from a bridge. On the same day, the military killed her mother and her twin sisters, who were 8 years old. The military also burned all of their houses and belongings, leaving them with nothing. Yet, the survivors of the village still returned to bury the bodies and body parts they were able to recover from the river in two mass graves. Santiago spent about two years in the mountains after the massacre, with her surviving siblings and cousins, where they fled continued military persecution including repeated bombings from helicopters.

It was the similarities between the stories, the uniform cruelty and lack of respect for the lives of the Ixil people, which demonstrated the systematic nature of the violence substantiating the charges that genocide was committed in Guatemala.

The prosecution asked each survivor what it meant to them to testify in the trial and how it made them feel to be there speaking to the court. Their answers ranged from expressions of pain and loneliness over loved ones lost, to relief at finally having the chance to give voice to the trauma they have carried for three decades. Many also expressed their fervent desire to protect their children from experiencing another genocide.  Some spoke about testifying in memory or honor of a family member who was killed. Multiple witnesses insisted, repeatedly, that they were telling the truth, had no reason to lie, and wanted to make sure that their stories were believed.

Throughout the trial, the defense’s questions have centered on whether the survivors were involved in the guerilla and if they were paid to present their testimony or on the ethnicity of the perpetrators. One trial observer described how the defense attorney shouted his questions at the soft spoken Ixil survivors, and objections were raised several times over the repetitive nature of the cross-examination.

On April 2, ten women described the sexual violence they experienced and saw, including gang rape and prolonged sexual slavery. They took this brave step despite the court’s refusal to allow them to testify privately and the risks of future violence or rejection by their families.

One woman testified that the military took her and her mother to the Tzalbal military installation in May 1982 when she was 12 years old. Soldiers tied her hands and feet, stuffed her mouth with cloth, forced her to watch the rape of her mother, and then raped her. She explained that she didn't know how many soldier raped her and afterward, she said, “the blood ran out of me." Her mother died as a result of her treatment at the military base.

On April 4, a former mechanic for the military testified that he witnessed the involvement of Otto Pérez Molina in ordering massacres and other atrocities in the Ixil Triangle. The President’s General Secretary responded by condemning the Prosecutors for allowing testimony against someone not named in the case and threatening action against the witness.

33 forensic experts testified for the prosecution, centering on their work exhuming the remains of the deceased and piecing together the stories of their deaths. The forensic anthropologists were joined by archeologists and social anthropologists, including GHRC staff member Dania Rodriguez. Other expert testimony presented by the prosecution includestatisticians, historians, experts in international law and analysts.

On Monday, the prosecution presented its final experts. First was Dr. Héctor Rosada Granados, a Guatemalan social scientist and former Secretary of Peace. He explained why the army specifically targeted the Ixil people, explaining that they were seen as rebellious, unwilling to bend to the will of local elites and thus natural supporters of the guerilla.

Second was Elizabeth Ann Oglesby, a professor of geography at the University of Arizona. She described how the Ixil people were first displaced through the scorched earth policy, then rounded up into internment camps and forced to participate in military activities. Those who resisted capture were pursued through bombing campaigns. Both testimonies relied on military plans to show that these strategies were systematic and that the intent was annihilation. Oglesby also mentioned conflicts between Ixils and local landowners as a reason the Ixil were targeted by the military.

On Tuesday, the defense presented the testimony of two more experts. One of them, Alfred Antonio Kallschmit Luhan, the Executive Director of the Foundation to Help Indigenous People (FUNDAPI), focused on Ríos Montt’s administration’s programs to deliver aid to indigenous people in the Ixil triangle including “Guns and Beans” and “Roofs, work, and tortillas.” Luhan argued that the model villages were not internment camps, but aid centers, and that the forced participation in civil patrols “restored people’s dignity.” FUNDAPI was largely funded by American Evangelical groups, the same groups which lobbied the Reagan Administration to support Ríos Montt’s government.

The final evidence presented to the court yesterday were various interviews recorded by documentarian, Pamela Yates, in 1982, including one with Ríos Montt himself. The key part of the 30 year-old interview comes when Ríos Montt insists that he has control of the army. He, as well as the two Guatemalan generals on camera, also emphasized the importance of US support for their efforts in the countryside. General Horacio Egberto Maldonado, stated for example “[The US] is completely willing to collaborate with us," and he sent, “A big brotherly hug to the people and government of the United States, to thank them for their ongoing support, which we need so much now to fight this battle."

The trial has provoked a predictable backlash on the part of the military’s staunch supporters. On the opening day of the trial, pro-military protesters stationed themselves outside the court with banners stating that there was no genocide in Guatemala, referring to statements made by President Otto Pérez Molina and his Secretary of Peace. During the second week of the trial, another pro-military protest was staged. With military music blaring, the small group hung signs stating that “Communism finances the destruction of national unity,” and decrying a “world in reverse” in which “defenders of your liberty” are imprisoned and condemned and “terrorists” are “free, exalted, honored.”

Various paid advertisements have been taken out in Guatemalan newspapers claiming that genocide was not committed in Guatemala and accusing various human rights defenders, international organizations, and Catholic religious leaders of subverting the Ixil population to an armed Marxist movement. There have also been numerous reports of threats of violence against those involved in the trial and other supporters of the process.

Numerous international legal experts and others have sat in on the trial to help ensure that it is conducted according to the rule of law and to show support for the process. Several organizations, including GHRC, have been publicizing the case, hoping that the high profile will help protect those involved. GHRC staff have been present with partner organizations in the courtroom and provided information and analysis to media outlets.

We have also worked with many other organizations to pressure the U.S. Government to speak out in support of the case, and were in frequent contact with the office of U.S. Ambassador at Large for War Crimes Issues, Stephen Rapp, who also plans to attend the trial.

As the trial draws to a close, international attention and solidarity are as important as ever. The danger of violence if the accused are found guilty is very real, as is the need for ongoing psycho-social support for the survivors. This case is also just one of several against Guatemalan military officials for crimes committed during the internal armed conflict.