In Solidarity: Stand up for the Sacred 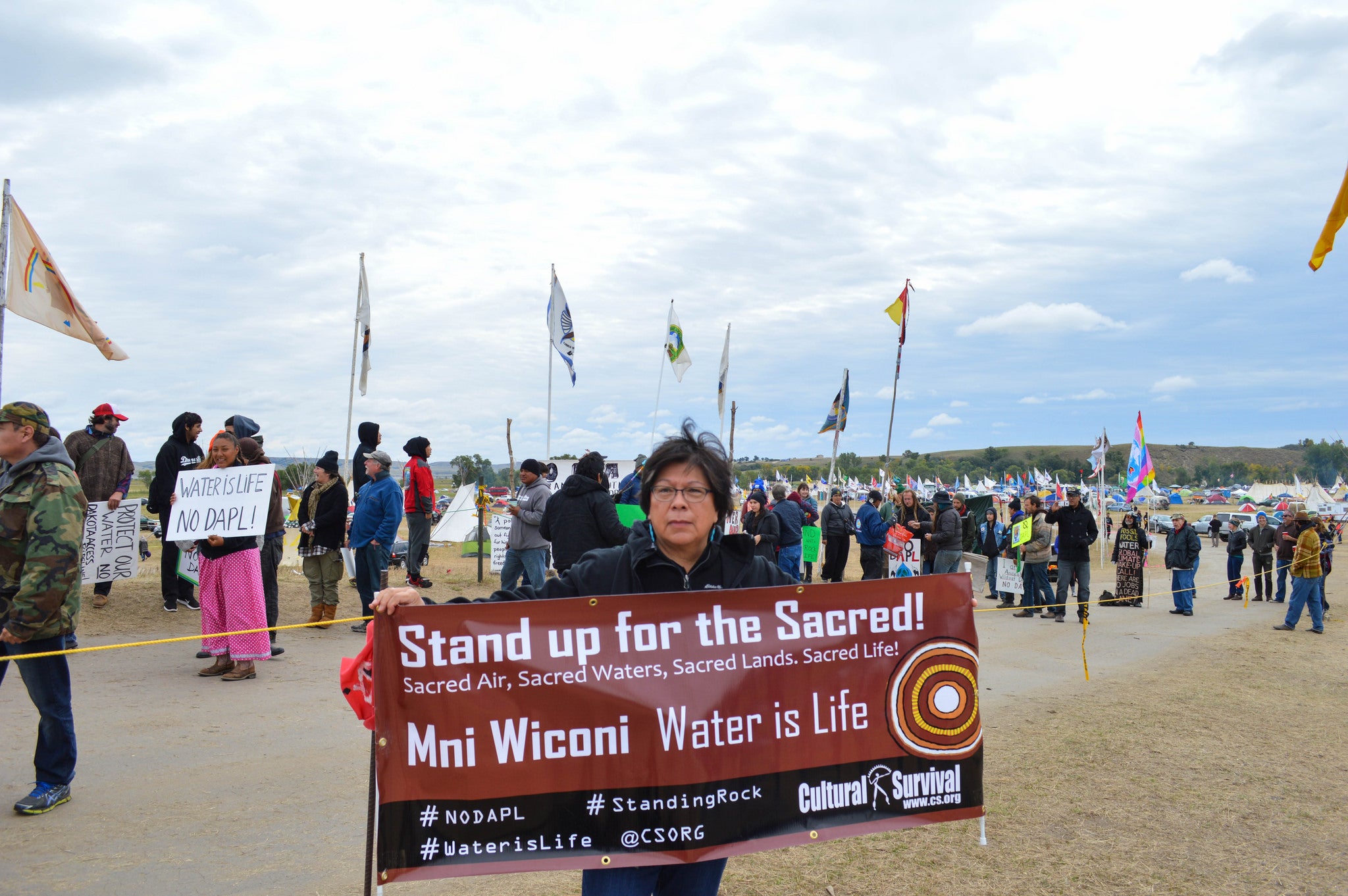 The Dakota Access Pipeline will span across four states carrying up to 570,000 barrels per day of crude oil and will cross the Missouri river threatening the Standing Rock Sioux Tribe’s main water source and sacred lands. The recent treatment of unarmed water protectors by law enforcement officials through detainment, hooding, use of security dogs, militarized police, pepper spray, tasers, rubber bullets, sound and concussion cannons, destruction of property, military-style checkpoints, low-flying surveillance planes, invasive strip searches, and the wounding of animals is excessive and uncalled for. We are reminded whom law enforcement is really protecting: corporate interests over ordinary citizens protecting their basic life sustaining resources. As a society, we have to keep exposing the racism and corporate greed that governs our lives in order to make change. Morton County Sheriff's office handling of these peaceful protests remains deplorable and the Standing Rock Sioux Tribe’s Chairman’s calls for protection from the Department of Justice have been ignored. The protectors are asserting their First Amendment rights.

This is a unifying time in our history evidenced by the show of support from Tribal Nations, Indigenous Peoples, and individuals from all over the world. We are standing up for the sacred, for Mother Earth and our natural environment to stop them from being destroyed and for all and future generations. Standing Rock has become a call to action for all Indigenous Peoples to make their voices heard and demand the right to Free, Prior and Informed Consent. The remarkable outpouring of domestic and international support confirms that. We cannot drink oil; water is life. And yet, violence against Indigenous people climbs globally as land and resource conflicts escalate.

This struggle resonates globally with Indigenous Peoples. It is a much larger struggle encompassing all Indigenous Peoples who are fighting for their lands and territories against multinationals and large scale development who put a price tag on the environment.

Mainstream media has been sluggish in covering the events at Standing Rock. More than 200 of the protectors have been arrested but to get the main stream media to cover the story, it takes celebrities Shailene Woodley and Mark Ruffalo to step in. We are thankful for social media outlets that arm protectors with the ability to live stream and show the world the truth from the frontlines of engagement. Our attempts in communicating the realities on the ground continue to be undermined, as the area has been deemed a no fly zone except for police activities, water protectors are no longer able to fly video drones and drones have been shot at by police. Reporters like Amy Goodman from Democracy Now! have been arrested and charged with outrageous allegations, though these charges have been dismissed, this misguided attempt to silence the media is disturbing. We should all be fearful when attempts to block airwaves to silence our voices occurs, behind the silence the greatest atrocities can occur.

We are at a crossroads, President Obama has the opportunity to set a new path for relations between the US and our people. Despite the Obama administration asking Energy Transfer Partners to voluntarily halt DAPL construction until a thorough review process has been completed, activities continue and shockingly no stronger support for the Standing Rock Sioux Tribe has come from the Obama administration. The State of North Dakota is overtly collaborating with Energy Transfer Partners and escalating tensions by authorizing law enforcement to protect continuing construction. We call upon the United States to uphold its commitments to the UN Declaration on the Rights of Indigenous Peoples that President Obama endorsed in 2010 and to the obligations of the 1851 and 1868 Ft. Laramie Treaties.

Article 3 of the UN Declaration on the Rights of Indigenous Peoples states, “Indigenous peoples have the right to self-determination. By virtue of that right they freely determine their political status and freely pursue their economic, social and cultural development.”

Article 11 states, “Indigenous peoples have the right to practice and revitalize their cultural traditions and customs. This includes the right to maintain, protect and develop the past, present and future manifestations of their cultures, such as archaeological and historical sites, artefacts, designs, ceremonies, technologies and visual and performing arts and literature. 2. States shall provide redress through effective mechanisms, which may include restitution, developed in conjunction with indigenous peoples, with respect to their cultural, intellectual, religious and spiritual property taken without their free, prior and informed consent or in violation of their laws, traditions and customs.”

Article 32 states, “Indigenous peoples have the right to determine and develop priorities and strategies for the development or use of their lands or territories and other resources.”

Cultural Survival stands with the Standing Rock Sioux Tribe and the Oceti Sakowin in exercising their sovereignty and with the protectors on the frontlines putting themselves at risk to protect our waters, standing up to corporate greed, and working to combat climate change.

Let us keep up our prayers, solidarity, activism, leadership, and efforts in any way we are able to sustain the fight for our rights, life, and future generations.

Ask for peaceful resolution, and that respect be shown for the constitutional rights of those engaging in nonviolent direct actions involving civil disobedience. Ask him to recuse himself from the State Industrial Commission and avoid conflicts of interest in his service to the People of North Dakota and Big Oil. Ask him to visit the camps and share prayers and songs with our people, to listen to us as human beings who want only to protect our children and our future generations, and our water.

Ask for a demilitarization of their tactics and to protect ALL North Dakota citizens and visitors. Request that they refrain from mass arrests, macing, clubbing, hooding, strip searching, and armed confrontation with UNARMED peaceful water protectors engaged in constitutionally protected civil disobedience. Ask them to inform their officers about treaty law, federal Indian law, and to provide training to their officers on sacred sites protections and the American Indian Religious Freedom Act of 1978, as well as the UN Declaration on the Rights of Indigenous Peoples.

Ask President Obama to deny the Army Corps of Engineers’ Permit for the Dakota Access Pipeline. Remind his administration of their commitment to combating climate change, and to implementing green/renewable energy solutions -- and that fracking and fracked oil are NOT clean. Remind Obama of commitments he signed onto under UN Declaration on the Rights of Indigenous Peoples, that Indigenous Peoples must give their Free, Prior, Informed Consent before any projects that may affect them.

Ask them to deny the DAPL the permit. Remind them that the federally mandated Tribal Consultation Process is broken when Tribal Nations are merely informed that projects are already in process on our doorsteps, but have not been given the opportunity to propose alternatives. Free, Prior and Informed Consent was not conducted, and this is a violation of the UN Declaration on the Rights of Indigenous Peoples.

In it's September 9 statement, the United States Department of Justice said: "The Departments of Justice and the Interior will continue to deploy resources to North Dakota to help state, local, and tribal authorities, and the communities they serve, better communicate, defuse tensions, support peaceful protest, and maintain public safety." Call the DOJ Civil Rights Division and tell them they are not doing enough and must take immediate action to protect peaceful demonstrators' first amendment rights:

Urge Energy Transfer partners to respect President Obama’s request to voluntarily pause all construction activity within 20 miles east or west of Lake Oahe. Commit to a peaceful resolution. You will ultimately lose more profits the longer you fail to respect communities rights, as we will not back down.

How to join the fight:
ORGANIZE yourself and/or large groups of people from your community to come to Standing Rock.
Contact Organizing@NoDAPLSolidarity.org to discuss details and schedule a time frame.

DONATE to the Standing Rock Sioux Tribe - Dakota Access Pipeline Donation Fund
Make a donation to the Official Standing Rock Sioux Tribe DAPL Donation Fund through PayPal. Donations will be used for legal, sanitary and emergency purposes!
SHARE - everything you see and read on social media or in the press or expressions of your own feelings, share them with everyone and anyone you know.  This is a peaceful camp and our strongest defense is the awareness of the public.
#HonorTheTreaties #NoBakken #SacredStoneCamp
#STOPDAPL #MniWiconi #SacredWater #NoDAPL #RezpectOurWater #StandWithStandingRock
Country
United States
Issues
Human Rights