Shinnecock Indian Nation is Exercising its Right to Self-determination 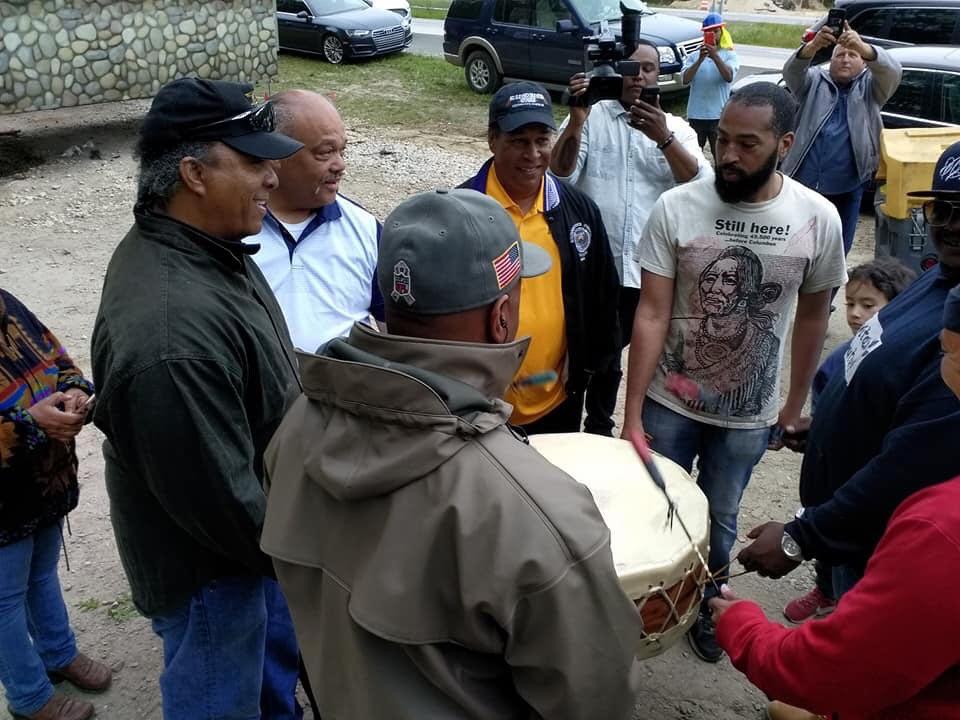 The Shinnecock Indian Nation, whose sovereign lands border a stretch of Sunrise Highway in the Hamptons, have had their economic future become the subject of recent legal contestation under the state of New York. While the surrounding non-Tribal land has been intentionally developed to build extreme wealth, Shinnecock Nation’s most basic economic decisions are being unfairly monitored and targeted for earning the revenue to provide necessary social services. In order to generate the revenue to provide essential services for their people, Shinnecock Nation has operated within their legal rights to construct electronic billboards advertising high-end products as a means of essential commercial activity. These structures are more than basic billboards because they function also as monuments marking the traditional space of Shinnecock Nation, showing respect to Tribal self-determination, sovereignty, autonomy, and decision-making processes, and welcoming visitors to the full landscape of Shinnecock Nation, a landscape that is socially distinct and fully autonomous from the surrounding construct of the Hamptons. 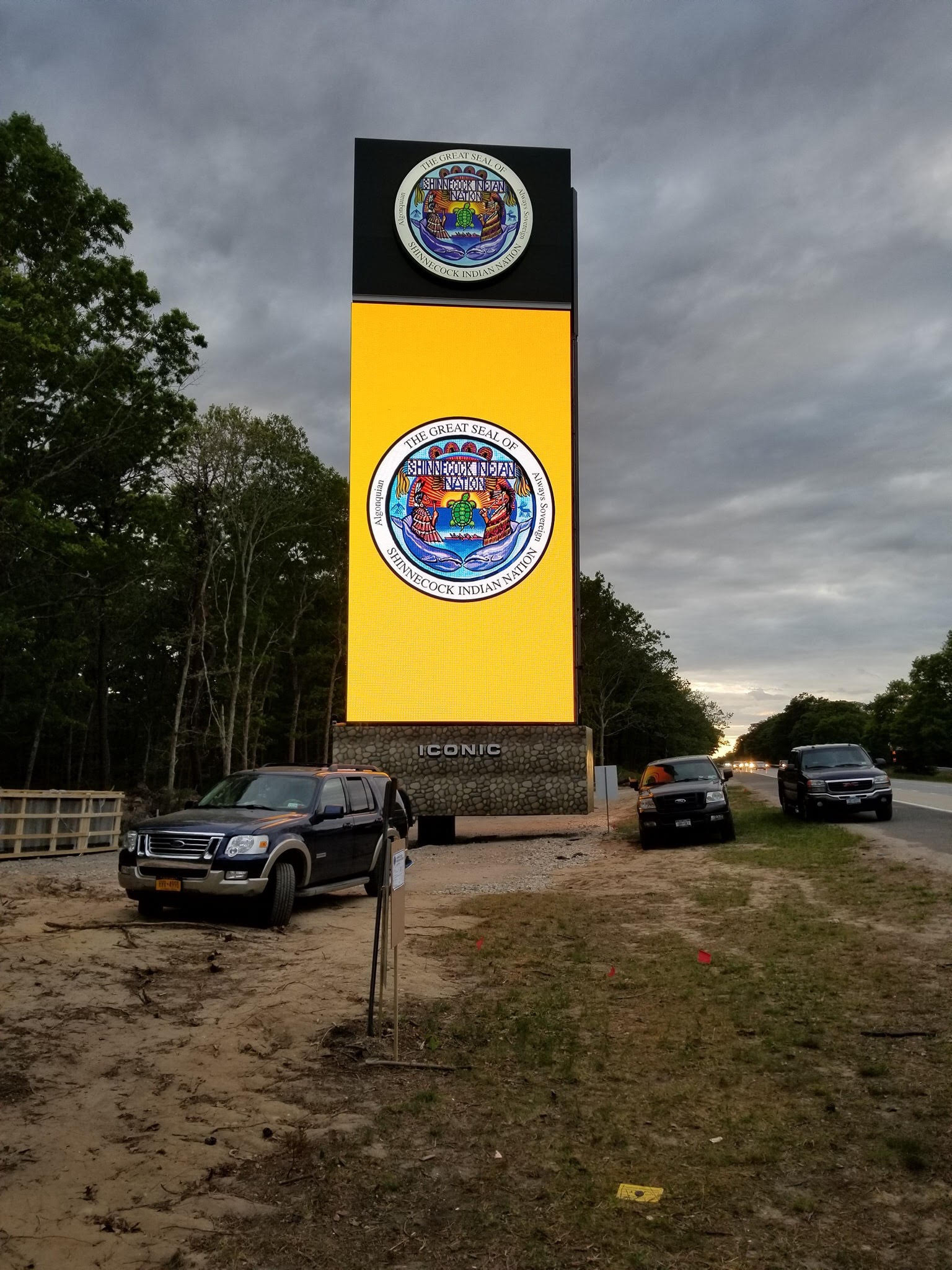 The state makes a series of hypocritical and entitled arguments against these structures including that the monuments are aesthetically incongruent with the vision of the Hamptons, and that the entrance to the Hamptons is visually altered therefore altering the carefully constructed feel of the elite vacation setting. This particular argument is in direct contradiction to the visually disruptive development projects undertaken by the state of New York not far from where the Shinnecock monuments stand. Members of the Tribe have positioned themselves close to the monuments to defend their sovereignty and autonomy, with all the necessary permits and information regarding the use of their own Tribal land. Land has always been used for activities essential for survival, and that discretion continues to be the right of the Shinnecock Nation. The state argues that the Shinnecock monuments generally do not fit with the Hampton’s development ideals, undermining the basic independence and economic rights of the Native People who have thrived on the land for millennia. This has resulted in transparently discriminatory legal action and an attempted lawsuit against Shinnecock Nation. Shinnecock Nation is a federally-recognized sovereign nation and has the right to develop land, pursue commerce free from civil regulatory restrictions, and is immune from suit and state overreach.

The legal right to self-determination is critical for Shinnecock Nation, who have been forced to defend their surroundings and who have frequently been the victims of dislocation and forced migration in various periods of both historical and contemporary time. After the experiences of brutal Indian termination policies, essential Native American rights were acknowledged and granted by the government, including the right to determine the future of what it means to be Native and transfer Native knowledge and heritage to future generations. This includes the decision-making required to sustain essential activities on the land without fear of retaliation by outside, dominant spaces. The State’s negative reactions and ongoing legal attacks are a continuation of long-held historical attempts to impede Tribal interests, well-being, and economic progress. Halting economic activity restricts community life and contributes the erasure of Native People from rightful lands. By limiting essential survival activity, the Tribe is forced to live high percentages beneath the poverty line for insufficient reasons. Arguments over the visual content of the signs disregard the fundamental right of Native People to subsist and thrive on protected lands, including the pursuit of basic economic services essential to sustaining community life. When that fabric is undermined, it becomes a direct attack on the continuity of civil rights. While Shinnecock economic production activities are targeted and attacked, the production activities of the wealthy are seemingly encouraged and doubled. These activities are often more disruptive to the physical landscape, and also interfere with the ability for Shinnecock Nation members to fully have stewardship over their most direct environs. 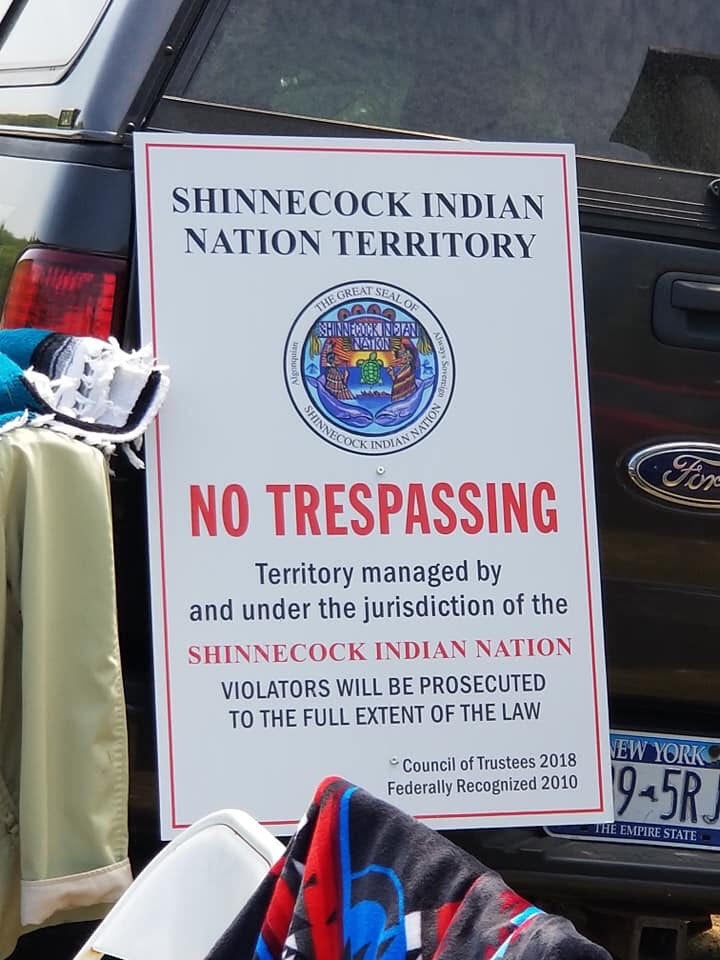 Close to the site contested by the state is a 100-foot cellular tower, which is nearly twice the size of the Tribal monument signs and takes up more visual space than do the monuments. The state consistently appears concerned with the visual content of Native-owned monuments, but not the aesthetics of its own development projects which cause more visual distraction.There is also no concern about the development projects which have impeded Shinnecock Nation life and connection to local environs for over 400 years or an acknowledgment of the rights of Shinnecock people to visually experience important tracts of land. The Shinnecock community lives on a reservation across Heady Creek from Dune Road. Within recent generations, Shinnecock people have had their view of dune road obstructed by expansive development, altering the visual landscape of the reservation space. In contrast, new houses on Dune Road continue to have an unblemished view of undeveloped reservations lands while Native People are pushed away and their access to these views have been diminished. 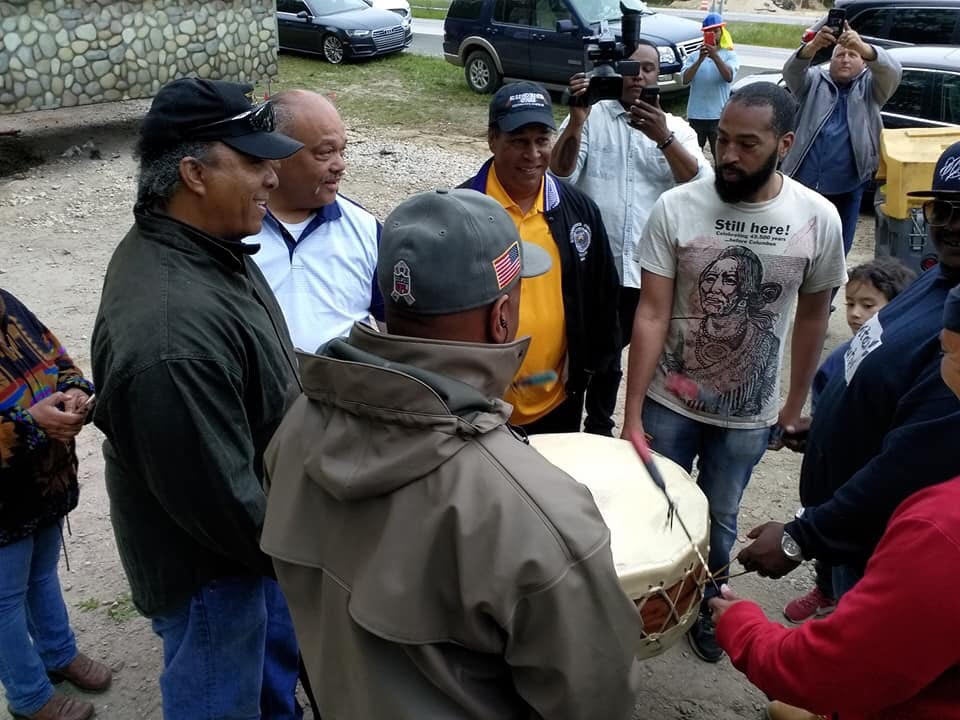 The Shinnecock Canal, considered a sacred place to the knowledge, was also put under external development projects causing great distress to the people who were not acknowledged. Shinnecock people have long lost the aesthetic environment, and the Shinnecock view of their own land has been significantly diminished by these surrounding projects. The state, while disrespectfully failing to acknowledge Tribal sovereignty, also continues to diminish the experiences of a people who have continuously undergone severe environmental dislocations with continued development projects but who are given little patience in creating their own essential means of survival. Economic adaptation to surrounding development is critical for the Tribe, as resources on reservations are limited.

The Shinnecock Nation, for over 400 years, have lost lands to development and have been forced to migrate away from culturally significant lands and activities. While the Shinnecock People are legally criticized for using their own land, government projects continuously fail to acknowledge Native Americans in their development plans. The visual composition of the signs remains at the discretion of the Tribe. The continued trauma of land loss and dislocation causes socio-economic harm to the Tribe and disrupts community fabric. In the mid-nineteenth century, the community was forced to move its historic settlement at Westwoods when the railroad moved through the space. Reservation life currently has limited development potential for the vast majority of its members, and traditional economic stepping stones are not available to Tribal members. Tribal residents cannot “alienate” land, so members cannot even get a home equity loan or rely on means of support offered outside the context of reservation life. People are frequently forced to max out credit cards to build or improve their homes, and are left several times below the federal poverty line. The extreme wealth and property costs in the Hamptons make it increasingly difficult to remain close to the land for members, as the cost of the locations proximate to traditional lands are prohibitive. While their basic decisions are questioned, they are forced deeper into poverty and are being improperly managed by the overreaching state development regulations from which they should be legally immune.

Top photo: Tribal trustees of the Shinneock Indian Nation and Youngblood Singers singing an honor song during the lighting of the Shinnecock Monument on May 31st.

For immediate support, and to join in solidarity with the community of Shinnecock Nation, please send letters and calls to New York State Attorney General Letitia James stating: “Shinnecock Nation is a sovereign nation and has the right to build on its land and pursue commerce free from civil regulatory restrictions improperly imposed by New York State. You need to respect Indigenous sovereignty.” Contact information is listed below:

To show further solidarity with Shinnecock Nation, you are encouraged to contact Congressman Lee Zeldin stating: “You are not acting in the interest of the original people of this Island that you are supposed to represent. Respect Shinnecock sovereignty and support their right to build on their land without retribution from New York State.” Contact information is listed below: