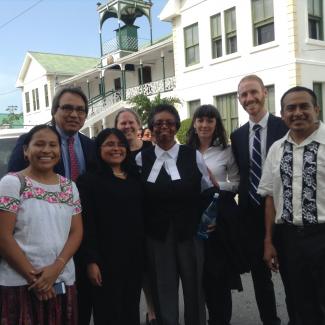 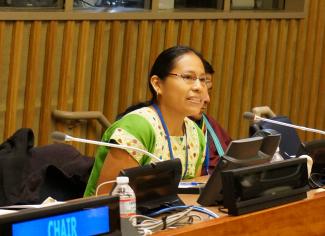 -Alfonso Cal: President of the assembly of traditional leaders

The Maya people of Toledo achieved a groundbreak- ing victory in international courts in April 2015. After decades of lawsuits in the national courts in Belize, the Caribbean Court of Justice, Belize’s high- est appellate court, reaffirmed that the 38 Q’eqchi and Mopan Maya Indigenous communities of southern Belize have rights to the lands they have customarily used and occupied. The court affirmed that these traditional land rights constitute property equal in legitimacy to any other form of property under Belizean law. The judgment is the culmination of litigation filed against the government of Belize by the Maya Leaders Alliance and the Toledo Alcaldes Association on behalf of the Maya villages. The government of Belize in the past has vigorously contested the assertion that the Maya have customary land rights. This agreement is historic in that the government has finally reversed this position and come to an agreement with the Maya people.
“We have been dragged through the courts for over 30 years, but today we are happy that the highest court again stood with my people to ensure that Belize gets on the right side of history,” said Alfonso Cal, the highest traditional lead- er for all the Maya villages. The Mayas’ claim to the land had been upheld twice in the national Supreme Court, once in 2009 and again in 2010, and once more at the appellate level in 2013, but was still not accepted by the government of Belize, prompting the move to the Caribbean Court of Justice.

The judgment requires the government to demarcate and register Maya village lands, and to cease and desist from any further interference, destruction, or use of the lands that would interfere with the Maya peoples’ enjoyment of their lands. The court also awarded damages to the Maya people in compensation for the moral and physical harm wrought by the bulldozing of crops and destruction of rainforests and watersheds caused by outside concessions granted by the State for logging, oil exploration, and other development without the Free, Prior and Informed Consent of Maya communities. An interesting aspect of the decision is that the court retained supervision of the implementation of the ruling to ensure that the government complies, and could enforce fines if they do not. In 12 months, both parties are required to report on the implemen- tation process. Many see the decision in this case as gaining new and impor- tant ground for Indigenous Peoples globally by setting a precedent in international law.

The Maya Leaders announced the win in a press conference during a tour at the United Nations Permanent Forum in late April, but emphasized that their celebration was not just looking inward. “This isn’t about beating our chests with pride. The Maya peo ples’ victory is a victory for all margin alized peoples in Belize and worldwide,” said Cal. The Maya are hopeful that other communities can make use of this decision to improve their own situations; the case has caught the attention of Indigenous Peoples fighting similar land rights battles with colonial governments around the world.

Senior Counsel Antoinette Moore, the Belizean lawyer who worked on the case, said, “The final appeal of the Maya communities of southern Belize before the Caribbean Court of Justice raises the important issues of Indigenous land rights, equality, and cultural integrity in the post-colonial Common- wealth Caribbean.” Professor S. James Anaya, former special rapporteur on the rights of Indigenous Peoples and expert lawyer at the Indigenous Peoples Law and Policy Program at the University of Arizona, explained, “The judgment reinforces the international standard that Indigenous Peoples have collective property rights based on their own customary land tenure systems, even when they do not have formal title or other official recognition of those rights, and that states are bound to recognize and protect those rights.”

It hasn’t been an easy win for the Maya in Belize. Pablo Mis, program coordinator for the Maya Leaders Alliance, spoke of the heavy toll this antagonism has taken on the Maya people. “We have been dragged through the courts, we have been placed against each other, and we have been called immigrants to the lands where the sacred bones of our ancestors rest. Like the trees of our land we swayed under pressure but kept reaching out to the sunlight. Our spirit was never broken.” The Maya have been fighting to legally establish their land rights, which they understand are guaranteed in international human rights documents like the UN Declaration on the Rights of Indigenous Peoples, since 1997 when several Maya villages learned that their ancestral land had been declared a national park by the government without their consent or involvement. A decade of domestic legal cases later, the Supreme Court of Belize handed a major victory to Indigenous Peoples by ruling that the Maya villages of Conejo and Santa Cruz have customary title to the lands they traditionally use and occupy in accordance with their ancestral land tenure system. In 2010 the court extended that title to all Maya villages of southern Belize. Meanwhile, the Belizean government tried to avoid implementing the decisions at each stage, bringing appeals to the decisions, and in 2010 used its authority over the Sarstoon-Temash National Park to grant oil con- cessions to the Texas-based oil company US Capital Energy, which is currently in the exploration phase.

The international community has kept a close eye on the developments in Belize. A coalition of organizations working in solidarity with the Maya of Belize, including Cultural Survival, has helped to sustain international advocacy leading to international human rights bodies overwhelmingly ruling in favor of the Maya. Cultural Survival launched an advocacy campaign against the oil drilling without the Free, Prior and Informed Consent of the Maya people in 2013, and assisted in advocacy work with Maya leaders in spaces like the UN Permanent Forum on Indigenous Issues, the Inter-American Commission, and the Universal Periodic Review in Geneva. These combined efforts have led to the UN Human Rights Committee and the Inter-American Commission on Human Rights both calling on Belize to recognize Maya land rights and desist from issuing resource extraction concessions. These recommendations came on the heels of similar pronouncements from the UN Committee on the Elimination of Racial Discrimination and the UN Human Rights Council in its Universal Periodic Review of Belize, along with consistent support and recommendations from former UN Special Rapporteur Anaya.

Cristina Coc, Spokesperson for the Maya Leaders Alliance and the Toledo Alcaldes Association, sees a hopeful future relationship between the Maya and the government of Belize. “This judgment marks an opportunity for Belize to rewrite its relationship with the first peoples of Belize...the government has finally accepted that they were wrong, and will finally get on the right side of history with the Maya people and put affirmative mechanisms in place that will protect the rights of Indigenous Peoples,” she said, adding that “this case is very important for the Maya people, but not just the Maya people—the young nation of Belize, and the rest of the world.” The Maya are relieved to finally put the question of who owns the lands to rest, and have expressed a desire to begin the transition to a new model of living in harmony with nature and with one another. They also extend gratitude to those who believed in their struggle during these many years “for the support that grew stronger year over year from Belizeans, [and] the many Indigenous Peoples that sent their prayers and words of encouragement worldwide.”

All photos courtesy of Maya Leaders Alliance
Image One: Maya leaders stand with their legal defense team, including former Special Rapporteur on the Rights of Indigenus Peoples, S. James Anaya (top left), and Senior Counsel Antionette Moore (center), after the decision was made at the Caribbean Court of Justice, Belize City.