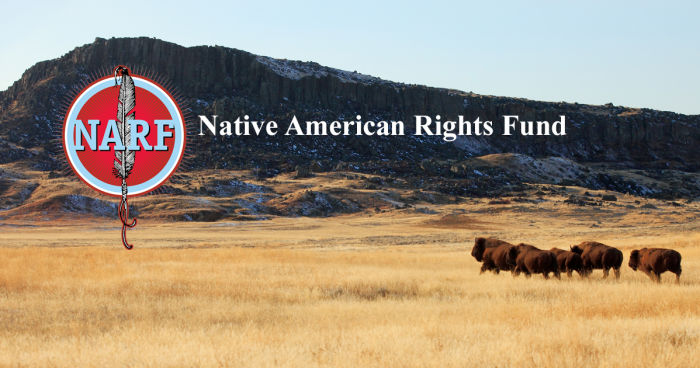 Great Falls, MT – (September 10, 2018) The Rosebud Sioux Tribe (Sicangu Lakota Oyate) and the Fort Belknap Indian Community (Assiniboine (Nakoda) and Gros Ventre (Aaniiih) Tribes) in coordination with their counsel, theNative American Rights Fund, today sued the Trump Administration in the U.S. District Court for the District of Montana, Great Falls Division, for numerous violations of the law in the Keystone XL pipeline permitting process. The Tribes are asking the court to declare the review process in violation of the Administrative Procedure Act (APA), the National Environmental Policy Act (NEPA), and the National Historic Preservation Act (NHPA) and to rescind the illegal issuance of the Keystone XL pipeline presidential permit.

On March 23, 2017, the U.S. Department of State granted TransCanada’s permit application and issued it a presidential permit to construct and operate the Keystone XL Pipeline. This decision reversed two previous administrative decisions and was done without any public comment or environmental analysis. The permitting process was completed only 56 days after TransCanada submitted its application for the third time. The State Department provided no explanation in the 2017 decision for its contradictory factual finding; instead, it simply disregarded its previous factual findings and replaced them with a new one. The reversal came as no surprise. According to a 2015 personal public financial disclosure report filed with the Federal Election Commission, then-candidate Trump held between $250,000 and $500,000 worth of stock in TransCanada Pipelines, Ltd. NARF Staff Attorney Natalie Landreth explains, “President Trump permitted the Keystone XL pipeline because he wanted to. It was a political step, having nothing to do with what the law actually requires. NARF is honored to represent the Rosebud Sioux and Fort Belknap Tribes to fully enforce the laws and fight this illegal pipeline.”

About the Rosebud Sioux Tribe:  The Rosebud Indian Reservation was established in 1889 by the United States' partition of the Great Sioux Reservation. Created in 1868 by the Treaty of Fort Laramie, the Great Sioux Reservation historically covered all of West River, South Dakota (the area west of the Missouri River), as well as part of northern Nebraska and eastern Montana. Also known as the Sicangu Oyate, the Rosebud Sioux Tribe has almost 35,000 members, many of whom reside in the area that will be crossed by the pipeline, including in Tripp County, South Dakota.

About NARF:  The Native American Rights Fund is the oldest and largest nonprofit national Indian rights legal services organization in the country. Since its inception in 1970, NARF has represented over 275 Tribes in 31 states in such areas as tribal jurisdiction and recognition, land claims, hunting and fishing rights, the protection of Indian religious freedom, and many others. This legal advocacy on behalf of Native Americans continues to play a vital role in the survival of tribes and their way of life.