Race, Indigeneity, and Land in Belize: A National Debate 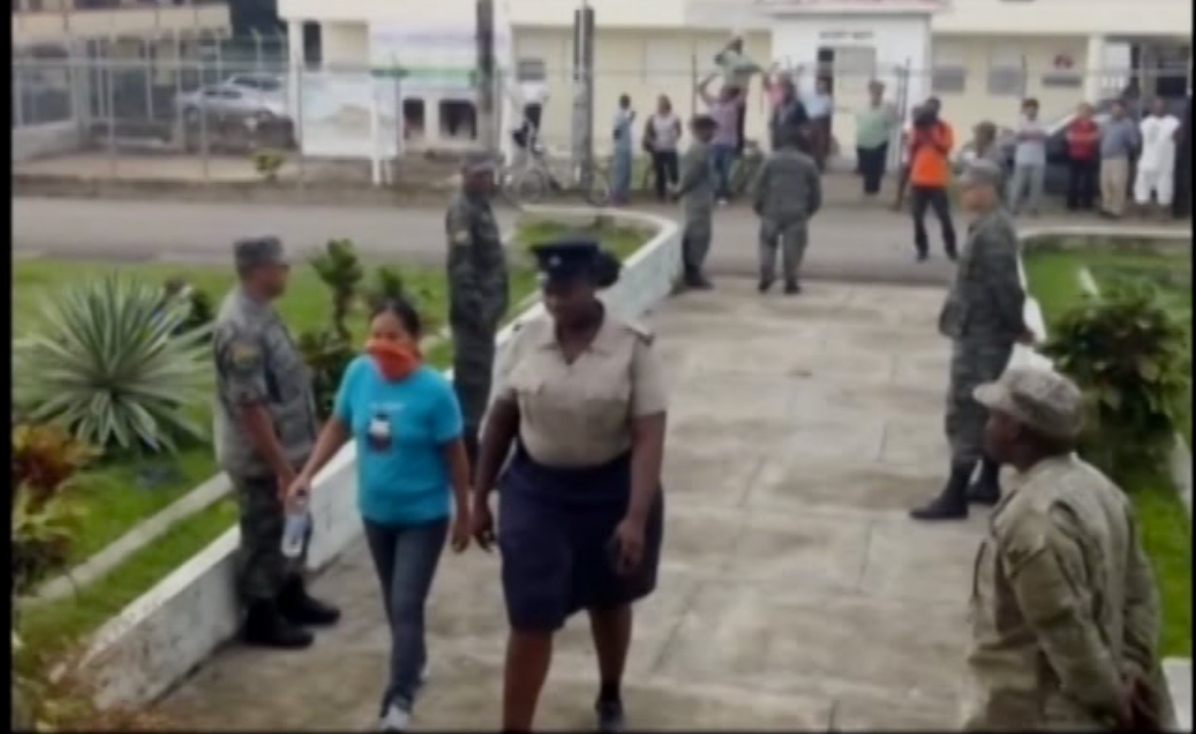 An incident on Maya land in southern Belize has sparked a passionate national debate in Belize over the role of race, ethnicity, and democracy in Belizean society.

On June 24, 2015, armed police arrested 13 Maya villagers and leaders on charges of unlawful imprisonment of Mr. Rupert Myles.  Myles had been notified by the Maya people since 2014 to cease the construction of a house within the grounds of the sacred Mayan archeological site Uxbanka.  The site stands within Maya communal lands, recently declared by the Caribbean Court of Justice as legal property of the Maya people.  After many months in conflict with Myles and without response from the national police, village police restrained him in handcuffs after he allegedly threatened to use a firearm.  Village leaders had previously alerted Mr. Myles about the impropriety of his actions and had requested government assistance, but to no avail.  After his later release, he pressed charges against the Maya and accused them of racism for preventing him from constructing in the village.  Among those charged was the village alcalde and respected spokesperson and mother Cristina Coc.

“I don't know how on earth they can ever justify this. In my view they've lost whatever moral high-ground they ever had and I want to look carefully at it to see if any of them might not perhaps be criminally liable from what they did to that gentleman. Tying up this man, falsely imprison him, physically assaulting him - that is absolutely intolerable and I am telling you, I mean to find out from the appropriate authorities what if anything they mean to do about it. (Channel 5 News, June 22, 2015

When informed by the reporter: “They say he built a structure since 2014 on the Uxbenka site and they did this as a last resort, that’s what their release says.” The Prime Minister’s reply was:

National and local TV, newspapers, social media, and bloggers have all taken up the debate.  Blogger Filiberto Penados, responded, “Note that the Prime Minister disregards the question of trespassing Maya lands and the fact that the Santa Cruz people had sought the assistance of the State to deal with this matter months ago by simply saying 'Well I don’t know about that. I don’t know about their sites'."   In fact, the Maya had notified the authorities of this issue multiple times over the past months, and requested the assistance of state police at their town meeting the day that Myles was arrested.

Many have called into question whether the alcaldes had the authority to detain Myles.   Penados went on to explain, “The Alcalde operates as a magistrate in the Maya communities - they have a responsibility for maintaining order. The Alcalde system is part of the legal framework of Belize. They arrest people; they have done in the past, since colonial days. So, the alcaldes are not just “these people” as the prime Minister refers to them. They are not just a mob. They are the law. Clearly, the arrest of Mr. Myles was neither random nor unreasonable.’’ The Prime Minister, however, disregards all of this, when he says  'I don’t know about that. I don’t know about their sites'.'"

Another central piece of the debate has revolved around race and culture and what it means to be Belizean. Mario Lara, a Belizean living in the US, reflected on the incident in light of the Black Lives Matter movement against unjust arrests and harassment of Black men in the US, although the Maya reject that view of the events.

“One of the related issues that have been front and center in the discussion is that of racism and bigotry in Belize – the darker side of a multicultural and diverse society, if you will. The allegations made by Mr. Myles Rupert that he was unwelcomed in the village of Santa Cruz, and that as a result he was ultimately insulted, humiliated, and wrongfully detained by the Santa Cruz Maya village community and village police simply because he’s black, is very disturbing,” he continued, however,  “The public pronouncements by the Prime Minister that they were guilty even before a proper investigation or much less a court trial had been conducted was quite a shocking display of indignation toward the Maya by the Prime Minister. The fact that the Prime Minister himself is a black man is not easily overlooked in this situation; and one has to wonder whether the alleged actions of the Maya community touched a core nerve with the Prime Minister that is rooted in his black (not his Belizean) consciousness and identity."

Many have has characterized the Maya people as non-Belizeans or foreigners, who are trying to separate themselves as having a higher privilege over other non-Maya Belizeans.    Cristina Coc, one of the leaders arrested, released a statement rejecting this pitting of oppressed minorities against each other, and brought up the  question of whether the Maya people can maintain their traditions and culture and still be 'Belizean'.

“All over the world, all throughout history, people have engaged in countless struggles for their dignity, for equality, for respectful and just societies, for democratic power relations, for a livable planet. We can draw lines between these different struggles, as if these struggles were separate and belonged to distinct social groups.  But the distinctions would be false and we would only lose sight of something important: that our struggle is for a better world, one that is more just and where there exists the possibility of many worlds.  In this sense there has only ever been one struggle.
"...Sometimes people may wonder wouldn’t it be easier for indigenous peoples to just get on with the play, check in their identities and become ordinary citizens, just learn English so you avoid being labeled Guatemalan, forget you native Q’eqchi or Mopan,  forget about communal property….. perhaps, but that would mean giving up our identity and our responsibility of creating a better world for our children and for all the children of Belize.  So, despite 500 plus years of oppression and marginalization, we continue to imagine and pursue alternative ways of being, ways of organizing our societies,  alternative ways of relating to each other and our environment.  Alternatives to dehumanizing colonial and neocolonial models.  It is not that we have the answers: but we believe like our forefathers that we must try.   In creating human beings our creators tried three times, two times they failed, in the third they succeeded.   In creating a just and inclusive nation we may fall along the way but just as the creators in Maya cosmology, we can only succeed by joining our words and our thoughts and our hearts.”

After her violent arrest, Ms. Coc has received a statement of support from Maya women, and also from neighboring Afro-Indigenous Garifuna communities Liyawada Cerro expressed their solidarity with the Maya across race lines;

"[We face] an attack on the right to communal land, to practicing autonomy within your communities. These are the rights we have as Indigenous people that scare the powerful. … Only when it suits them politically, do we ever have the government or the support of the educated and powerful. And so we must unite and we must seek good allies and support."

Nationally, tensions are running high following the international court ruling requiring Belize to accept Maya land tenure, after decades of opposition with the government. The case was won by the Maya in April 2015  at The Caribbean Court of Justice, Belize’s highest appellant court.  The decision reaffirmed that the Maya of southern Belize have rights to lands they have customarily used and occupied, and that these traditional land rights constitute property within the meaning of the provisions of the Belize Constitution that generally protect property free from discrimination. The Government of Belize now is required  to demarcate and register Maya village lands, and protect them against incursions by outsiders. Meaning the must adopt the necessary ‘legislative, administrative, and/or other measures’ to that end and, in the meantime, to abstain from and prevent acts that would adversely affect Maya land rights.

The responses from the Prime Minister belay a reluctance to embrace this decision.  Former UN Special Rapporeur James Anaya flew to Belize to provide his expertise and legal support. He released the following statement putting the incident into global and historical context:

"Belize stands at crossroad in it history and in defining the way forward in its treatment of the Maya people.  This crossroad is marked by two distinct, historical trends that are present on a global scale.  One is rooted in historical patterns of thinking and action that have discriminated against indigenous peoples and facilitated the taking of their lands by failing to recognize their customary land tenure and property systems that are crucial to their survival. Unfortunately, that trend can be seen in the positions and actions of government officials in many countries across the world.

But in many countries and internationally, that trend is being taken over by a modern, more enlightened one; one that starts with the premise that indigenous peoples are equal in value and dignity to all others, and that is more and more accepting of the proposition that their own systems of property and land tenure are to be treated on the basis of equality. This modern trend understands that embracing these rights of indigenous peoples is a mark of a truly democratic state that is genuinely respectful of the human rights of all.

The courts of Belize, the Caribbean Court of Justice, and the Inter-American Commission on Human Rights have together marked a path for Belize along the more enlightened, modern trend, by upholding the property rights established by the Maya people’s own laws and traditions on the same terms as the property rights of others. The government has made a commitment to follow that path.  The world expects that it now make good on that commitment."