The Plants Are Our Relatives: Corn, Beans and Squash, The Three Sisters

The last and much anticipated session in the summer series was an Eastern Woodland horticultural presentation and food feast featuring traditional recipes and demonstrations of Northeast Native cuisine. Loren Spears (Narragansett), the Executive Director of Tomaquag Museum, Rhode Island’s only Indigenous museum, led a presentation titled, "Indigenous Foodways: Stories of Harvest.” Throughout the presentation Spears stressed honoring the gifts of the sea and land. Spears sang a song in her Native language that tells of the Narragansett people being part of the soil/earth/sea. Spears then stated, ”Our ancestors lived inland during winter and on the coast in the summer and had an abundance of herring, clams, bass, blue fish,trout, and salmon that we harvested and hunted with minimal land disturbance.” She discussed how the Industrial Revolution’s construction of dams built for energy development dammed the rivers and interrupted the ecosystem, especially affecting upstream fish. In contrast the Narragansett's used basket traps to slow fish down but kept the balance needed for fish to go upstream for their next generation to develop by leaving the back end of the weir or basket trap open. The Narragansett also ate seals from the harbor and lots of wild turkeys are still in their rural area.

Loren Spears (Narragansett) and her pottery.

As an educator for twenty five years and most recently an adjunct professor at the University of Rhode Island, Spears educates the public on Native history and the environment, instructing them how to create indigenous foodways and support systems in urban areas. Along with her mother Dawn Dove, session co-chair Spears talked about creating food co-ops and community food gardens, re-introducing indigenous foods, using heritage seeds, and joining group activities such as collecting cranberries and gathering clams, reminding us that, "We must give thanks to the fish, fowl, and mammals who give their lives for us.”

On the display table Spears showed guests a beaver belt, mentioning that beavers are fresh water mammals and also informing us that Narragansett archives have a recipe for beaver tail stew. Also arranged on the table were clam shells used as tools to scrape hides and for adornment, corn husk dolls, a handbag made from a turtle shell, and a clay pot made by Spears. “Gathering of Plenty” was a discussion/demonstration of Northeast Native Woodland cuisine by Dawn Dove (Narragansett/Niantic Elder). Dawn Dove is a chef and restaurateur whose family owned Dovecrest Restaurant served New England cuisine for many years and had a large favorable review in The New York Times in December 9,1981. An educator, former Tomaquag Museum Director, Eastern Blanket Dancer, Dove discussed the ceremonial significance of food within her specific Algonquin nation’s culture while  simultaneously cooking traditional johnny cakes, served both plain and mixed with cranberries and topped with maple syrup. Johnny cakes are small pancake like corn meal patties. Also served was Narragansett Quahog Chowder, one of the Native versions of New England clam chowder which does not include cream or milk. In addition to being thankful for health and all the natural foods available to them on and near their reservation mother/daughter team Dawn Dove and Loren Spears are thankful for their 1983 Federal recognition and increased land base.

George Stonefish (Lenape) led the “Lenape Homecoming and Closing Ceremony.” George Stonefish is a Native culture bearer and singer/drummer with the NYC based SILVER CLOUD SINGERS. His presentation focused on the Lenape Diaspora from their original homeland of Manahtta (Manhattan) to Canada, Oklahoma and elsewhere and the future return of Lenape leaders to NYC for a fall 2018 reunion. 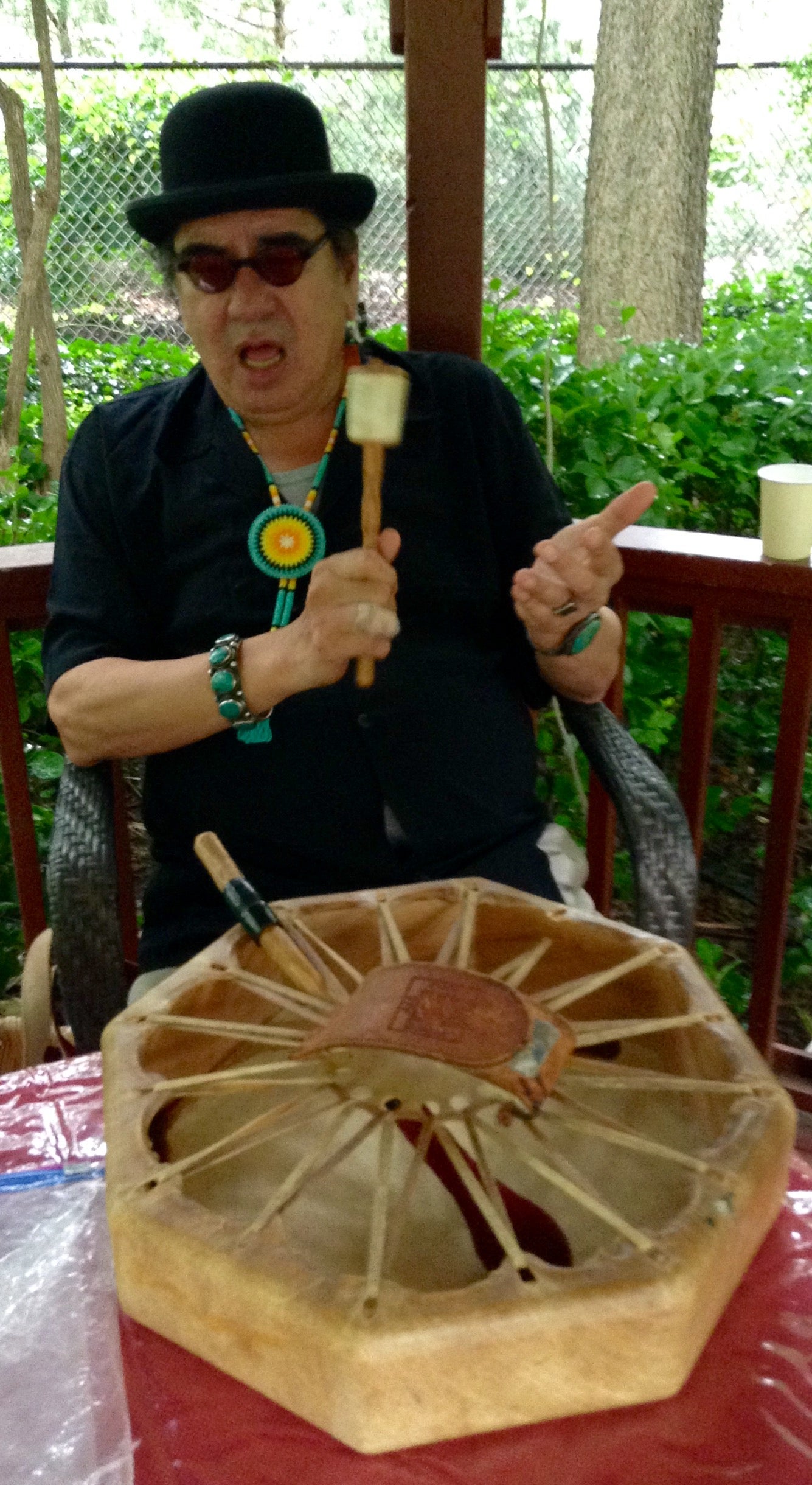 George Stonefish(Lenape) drumming and leading a round dance

Using a hand held drum Stonefish opened his presentation with a Delaware Skin Dance song and then proceeded with a brief history of the Lenape people. Oral and written history places them as the original people of areas in NYC and parts of upstate NY and in southern NJ in what is now Atlantic City and Atlantic County. They were the first Tribe to make contact with the Dutch settlement, helping the Dutch to survive and then became displaced across the United States and Canada. Some groups settled in Bartesville,OK and became federally recognized as the Delaware. Other families or clans lived among the Cherokees in Oklahoma and the Stockbridge community in WI, an area near the Menominee Tribe. There are currently Lenape Tribes and families living in NJ, PA,OH. The Nanticoke Tribe (a branch of the Lenape) live in a Delaware community. Some Lenape clans such as the Munsee moved in with the Oneida Tribe. Stonefish referred to the Ramapough as Lenape (Lunape) relatives whose land has been poisoned by the Ford company.

Stonefish is originally from the Canadian Lenape reserve in Ontario, that was affiliated with the Moravian church. He explained that,”Moravian missionaries traveled with us during our displacements and our customs often conflicted with their version of Christianity. Our last big Long House ceremony was in 1928 but that tradition is being revived.” Stonefish is looking forward to the fall 2018 Lenape symposium where U.S. and Canadian leaders can discuss the creation of a displacement history archive that is being funded by a five year grant.

The August session ended with Stonefish drumming and the other presenters and guests joining in a round dance in the park and embraces, words of thanks, and gift exchanges. As the photo-journalist covering the four month series (and arm twisted substitute panelist), I am amazed at Nadema Agard’s ability to bring together all these presenters from RI, CT,NJ, and Long Island to share Algonquin related cultural traditions with fellow Natives and the local diverse community surrounding Bruce’s Garden, Isham Park in the NYC Inwood neighborhood. The gatherings were often intimate in scale but expansive in the histories, foods, love, and spiritual healing freely given to regulars among the guests, one time visitors, and people pleasantly surprised while walking in the park and spontaneously joined us. Thank you Nadema Agard!