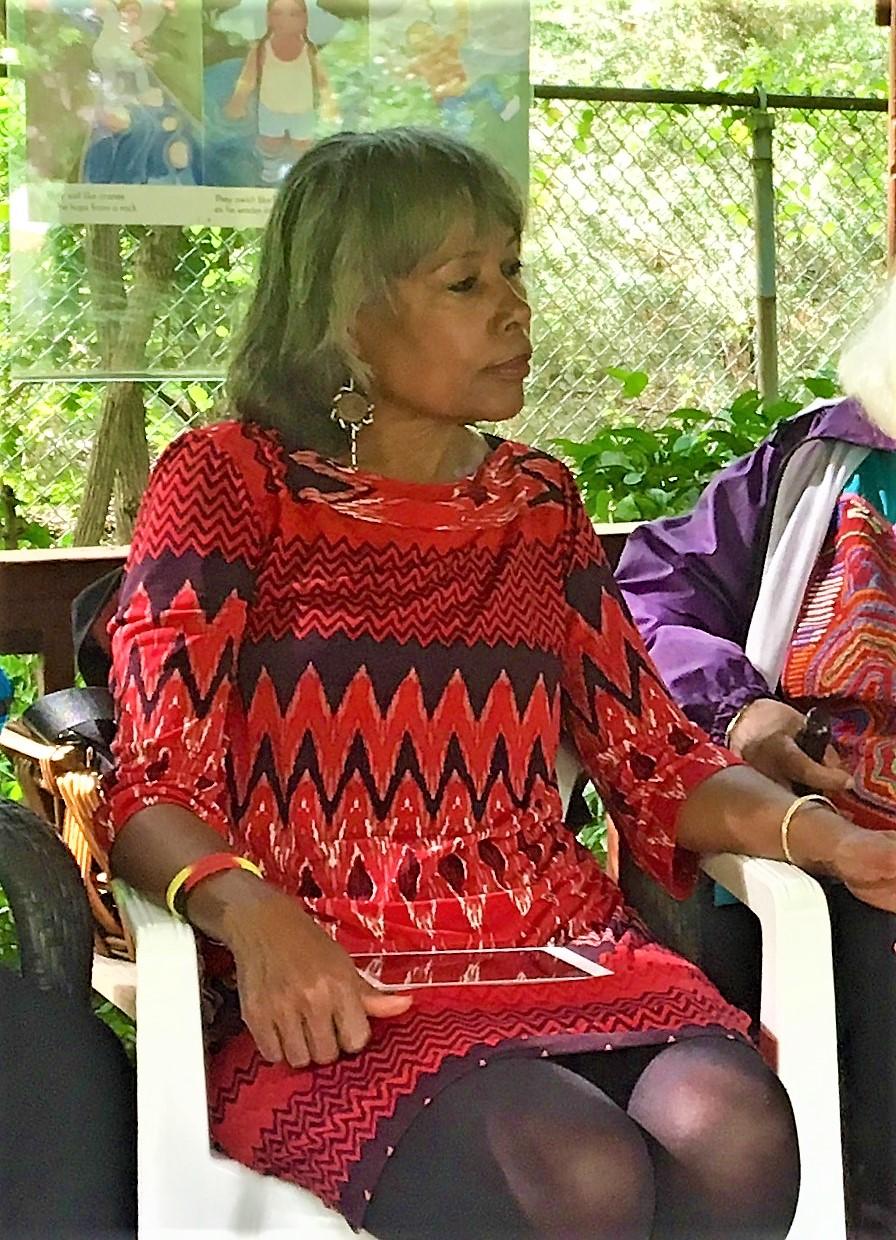 This Sunday included many respected Algonquin elders who have lived distinguished lives and are eager to pass on their wisdom and experiences to future generations. Gloria Miguel (Rappahanock) started us with songs and stories titled,”Grandmother’s Wisdom”. Gloria Miguel who’s maternal line is Rappahanock, one of the Virginia Tribes that made up the Powhatan Confederacy, is loved in NYC as one of the 1976 co-founders, along with her sisters Lisa Mayo and Muriel Miguel of Spiderwoman Theater, the oldest continually running women's theater company in North America. The name comes from a Hopi deity who taught her people how to weave. 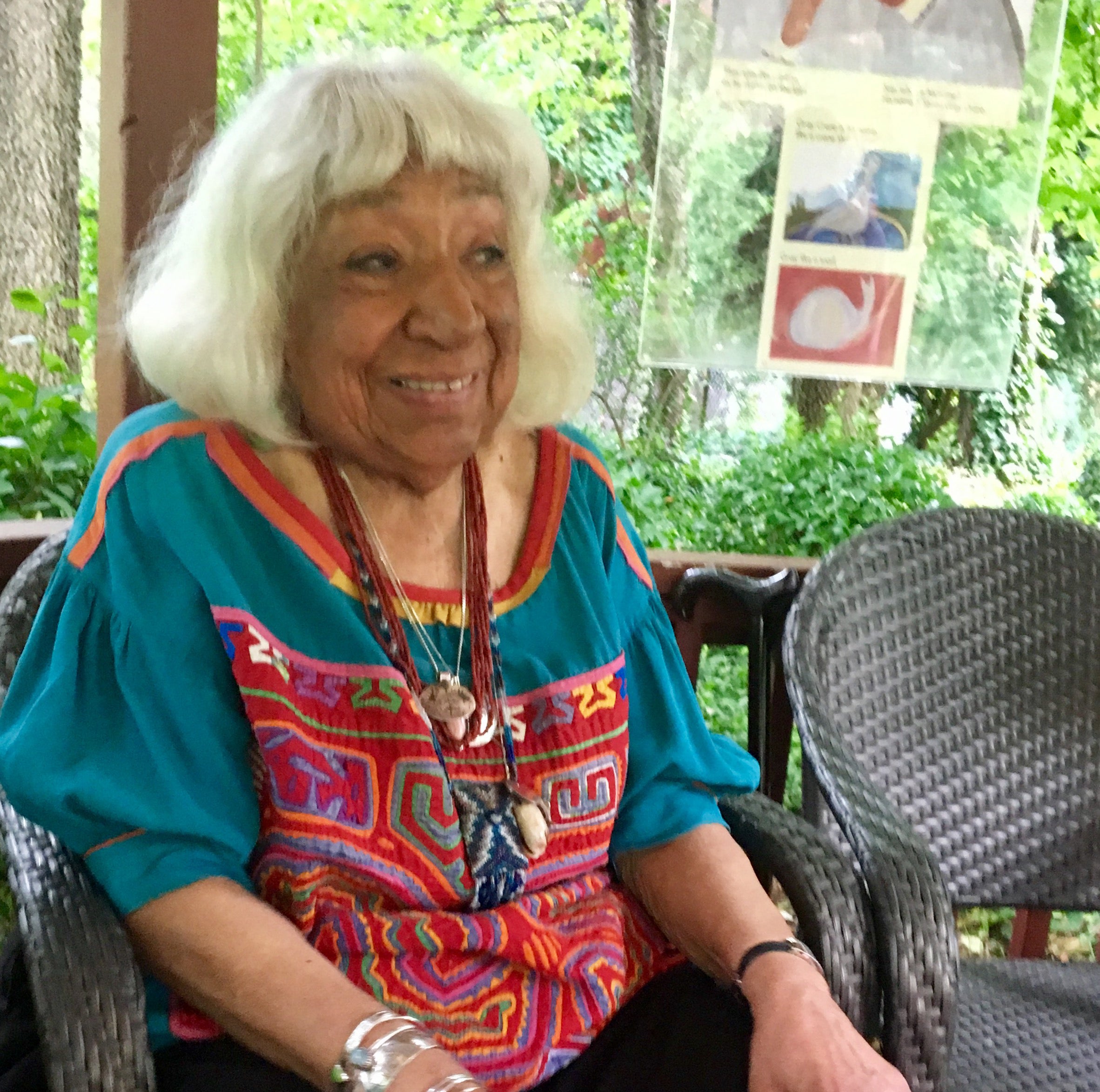 Gloria Miguel and her sisters describe their method of working as “storyweaving”, in which they create designs and weave stories using words and movement, creating an overlap of interconnected stories in which fantasy,power, reality, and humor are intertwined. Singing with her rattle and raising her arms upward and then downwards in circular motions and pointing to the four directions, Miguel stated, “One’s voice travels great distances and beyond”. These are some excerpts from her poem/song.

Miguel said, "Being an elder is a whole new world. Some people treat me like I am an ordinary person which I enjoy, not thinking of me as being special because I am old. I fought discrimination all my life and all kinds of hate and pain. As an elder I am still fighting. It gives me strength. I am lucky I can still think, create, and move.” Miguel concluded her session with her poem/song,"See Me, I Am Still Here.” The following are some excerpts:

Hello
See me
Look at me
I am talking
I am still loving,hating creating, performing
My songs
The stories of my life
Step back
Turn around
Look at me
Talk to me
Listen to me
Talk to me

The late afternoon panel, “”We Are a Sovereign Nation/Teaching For Survival” included moderator Alli Joseph (Shinnecock), Chief Dwayne Perry (Ramapough), Marguerite Smith, Esq.(Shinnecock), and yours truly, Phoebe Farris(Powhatan-Pamunkey) engaged in a back and forth dialogue with lots of audience participation.

Chief Perry started off with a bang, bringing up racism as still a major concern, especially for Algonquin Natives on the east coast who had the earliest contacts with Europeans and Africans, resulting in some inter-racial marriages/mixing, both consensual and forced. Chief Perry stating that,”If a person says he/she is Czech, says their grandmother is Czech, goes to a church that has a Czech majority population, and participates in Czech-American parades nobody questions their identity. But if you are Indian and have a dark complexion everyone questions you/us. But if you are blonde and say you are Indian no one questions you. They don't ask, how much Indian? It is all based on skin color.”The audience responses included gasps as well as nods of recognition and agreement. 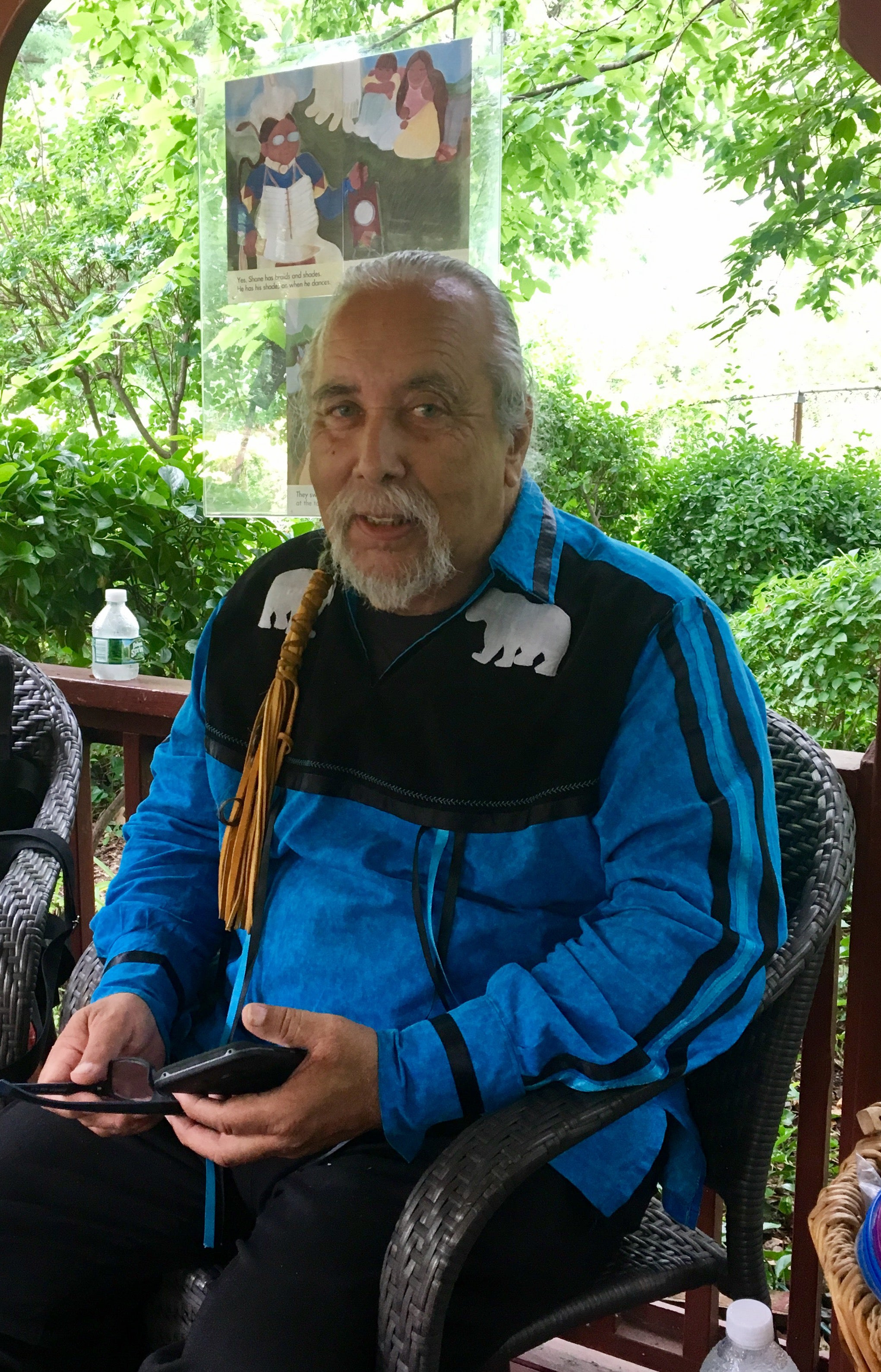 Chief Perry discussed his Tribe’s origins in the Ramapo Mountains that are located on the NJ/NY upstate border. Tribal members who live on the NJ side are recognized by the New Jersey government and those on the New York side have NY state recognition. Although the Ramapough people had contact with the Dutch in the 1500’s and live in the same general area the Tribe does not have Federal recognition. Perry explained that in 1934 automaker Henry Ford wanted his people to move off the mountain so he could build high end segregated whites only housing. Since that time the people have been involved in numerous protests and law suits regarding environmental pollution from the Ford company. An area called Tuxedo Park was created by building a canal into pine tree acreage, cutting one acre of trees per month. Developers dammed up a three mile canal into mines dumping toxic waste there because the Ramapough people didn't want to move. Perry and others refer to this pollution as a “toxic bomb.” The Ramapough are currently involved in a fine dispute going back to March 2017. The Sundance/Netflix series,”The Red Road” is a fictionalized version of the environmental health hazards affecting the Ramapough.

Panelist Marguerite Smith, an attorney and educator lives on the Shinnecock Reservation where she coordinates a Health Improvement Program. For more than forty years Marguerite Smith has been involved in Tribal governance and land claims including Shinnecock Federal recognition which was granted in 2010. In her opening statements she proudly stated, "My mother has images of seven generations in our living room. My mom felt that it was important for me to have my great grandmother’s picture on display. At one time there were six generations of family images in the room of people who were still alive.” For Attorney Smith this living room with family photos dating back to many years of living on their reservation is a way of looking at sovereignty as a personal matter. She related it is an intense struggle to look as to what or is sovereignty, sovereignty as a personal matter and as a collective matter, asking “How do our sovereignties interact? We lost lots of our land and homes on Long Island but we have held on to a little, in the Hamptons!” 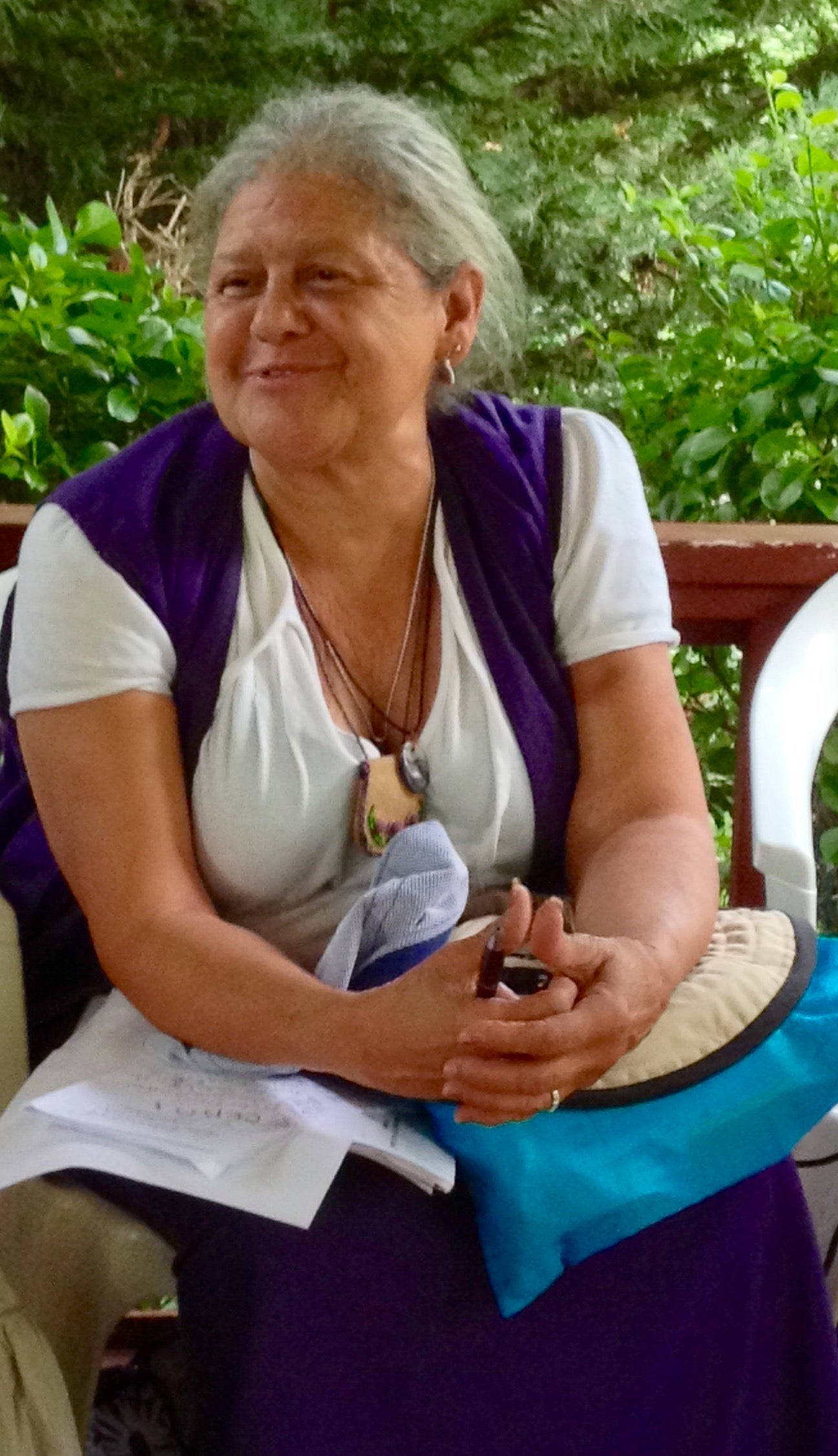 Joining the conversation about having a landbase in wealthy Southampton was Alli Joseph who is a TV contributing editor/writer/host at Salon, Brand Ambassador/LV1 Executive Consultant at Rodan Fields, a writer, and co-producer of the documentary, "The Last Piece” which is about saving the ancestral lands of the Shinnecock Nation.

Both women related how the local government in 1859 took some more Shinnecock land, carving out a piece of land and re-naming and re-zoning it. Shinnecock Reservation residents have to pay approximately $200.00 per season to use the ocean side beach that is a few minutes walking distance from their houses, on sand that prior to 1859 was part of their reservation. But they can use the bay front water for swimming at no cost although it is further away and most residents have to drive there. NY Governor Cuomo turned down their request for an exception to the fees that are too high for many Tribal members. 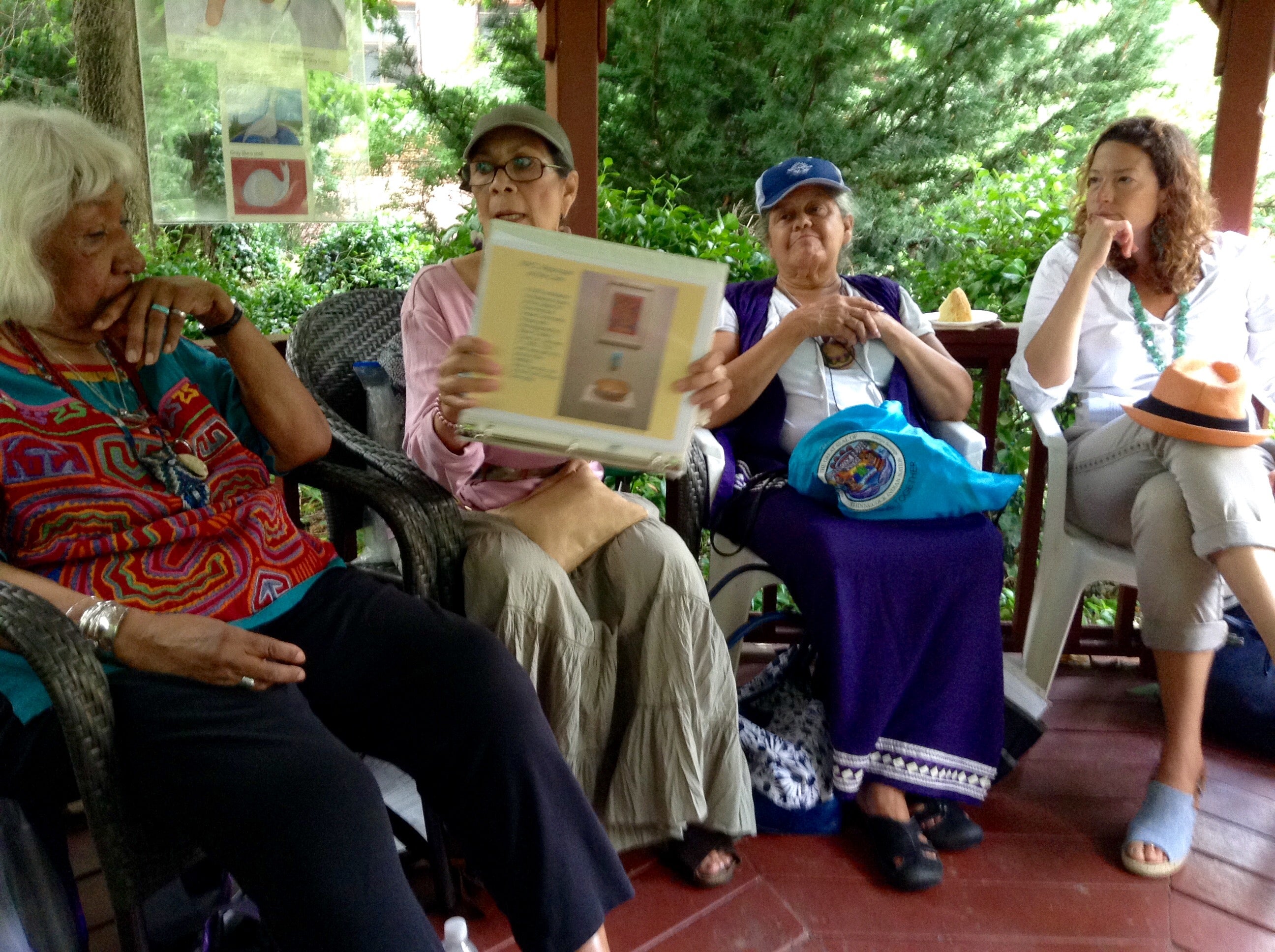 Marguerite Smith described the original zoning restrictions as a form of racial segregation and the added fees which have increased is a form of economic segregation. Smith also discussed the economic disparity that has greatly increased since the 1950’s, with the younger generation feeling it deeper as they now interact with extremely wealthy, mainly white people in the schools and in the surrounding town.Southampton is a summer haven for millionaires and the younger generation are more affected by exposure to this excess consumer consumption. Although acknowledging past (and current) racial/economic injustice is important, Smith stressed the importance of all Indians needing to have a sense of freedom to lift up all of us.
She talked about using our knowledge of our history and culture to come together and enrich us
but insisted that,"We can't let our past pre-mediate us.”

Of special interest to Natives who now live or have lived in NYC was Nadema Agard’s presentation titled, "Native Peoples of Inwood and New York City.”  As an Algonquin Nation (Powhatan) on her fraternal grandmother’s side and someone who lives near Inwood Hill Park, Agard feels it is important to have visitors become aware of the “Living World Essay” written by Leota Lone Dog, an Algonquin Nation person on her maternal side. Leota Lone Dog is a scholar on the history of the Native community in NYC. The Lenape name for the area now called Inwood Hill Park and Isham Park was “Shorakapok.” Since Lone Dog couldn't attend the summer series Agard read excerpts from her essay.

Shorakapok (Inwood Hill Park), located in the heart of northern Manhattan has a stone plaque that commemorates the Dutch purchase of Manhattan Island. The park is known for its’ Indian caves where in pre-historic times Indians sought shelter.It is also the site where Native Peoples lived as squatters in period housing well into the early 20th century. Although labeled squatters most Indians living in Inwood Park as well as the land now called Central Park had deeds to their small plots of land. Leota Lone Dog emphasized the fact that this Native community has been and continues to be an active and viable populace that have lived in the city for generations long before the mid- twentieth century relocation and termination policies that forced Indians off their reservations and into the cities.

The essay discusses the Society of American Indians and their designation on September 28,1915, that the second Sunday of each May would be American Indian Day with activities taking place in Inwood Hill Park. These observances at Inwood lasted until the USA entered World War I and resumed in the park in the 1920’s.

Inwood was also the home of Inwood Pottery, a school established in 1916 to teach aboriginal art appreciation and to train students in the reproduction of Indian pottery and designs found in the park. Lone Dog also documents the history of Indian Hill Cottage, a small museum in the park established by Ms. Bulrece, Cherokee woman also known as Princess Naomi. Princess Naomi was one of the leaders trying to re-establish Inwood Hill Park as an Indian Village. All of the above mentioned activities were disrupted in 1936 when Commissioner Robert Moses redeveloped Inwood Park and most residents, institutions, and cultural observances were relocated, displaced or terminated.

Unfortunately history repeats itself and this past summer the current residents of the Inwood neighborhood were seen on national TV protesting NYC council plans to build high rise condos and other buildings, raising the rents of the few rent stabilized apartments, and the request by private developers to even buy land in the park boundaries that would block public access to the current hill side views overlooking the city.

In closing, Nadema Agard mentioned feeling privileged to live a few blocks from one of the park entrances at Indian Road and 218th St. "It feels good to be so close to this sacred spot in the city metropolis, a place where I can connect with my Algonquin nation relatives on a very deep level.”