Patriarchal, Capitalist, and Colonialist Systems Lead to No Action at COP 25 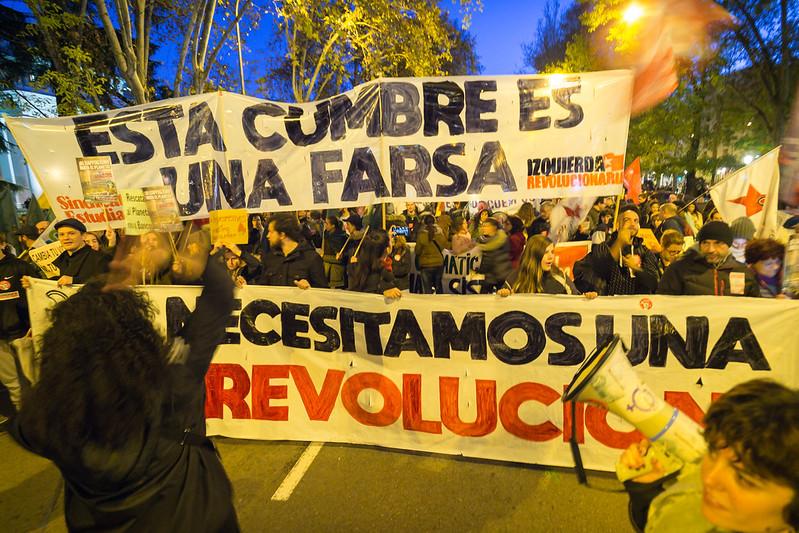 The 25th Conference of the Parties (COP25) to the United Nations Framework Convention to Combat Climate Change (UNFCCC) convened from December 2-15, 2019, in Madrid, Spain. Although originally meant to take place in Santiago, Chile, COP25 was moved to Madrid just one month prior to its start, after protests swept over the Chile. The last minute move gravely limited the participation of Indigenous delegates, as Chile would have been the first time the COP took place in the Americas in almost a decade. The year prior, in Katowice Poland, the COP focused on creating a Paris Agreement Work Programme, and adopted a Climate Package.

One of the most important issues on the docket was that of a global carbon market, a topic under Article 6 of the Paris Agreement. Although a global carbon market, in which emissions are capped and can be traded between nations, might seem like a solid pathway to overall emission reduction, many Indigenous Peoples argue that a global carbon market could actually make things worse. Cultural Survival spoke to Ta’Kaiya Blaney (Tla A’min Nation), who accompanied Canadian Indigenous climate justice organization Indigenous Climate Action (ICA) to COP25. She explains, “Indigenous Peoples at COP25 have been pushing for the inclusion of Indigenous human rights language in Article 6 in regards to the regulation of carbon markets, and have been pushing for an emphasis on non-market based solutions, because carbon markets lead to the privatization and dispossession of Indigenous lands. The practice of extracting from Indigenous territories in one place and using Indigenous territories elsewhere to offset those emissions, while there’s no actual development, is a flawed solution. It furthers violence against Indigenous Peoples and delays the transition from fossil fuels.” In the words of executive director of Indigenous Environmental Network (IEN) Tom Goldtooth (Dińe), carbon markets “will only deepen the climate crisis and shift the burden of carbon trading to the Global South. Indigenous people’s territories, rights, and self-determination are all threatened by carbon offsets and the privatization of Mother Earth.”

In addition to the debate surrounding a global carbon market, each nation presented their different initiatives, such as Japan’s project to decarbonize isolated islands and Colombia’s project to reduce the vulnerability of communities living in its northern wetlands. No resolution was found on the issue of a global carbon market, though, with most calling COP25 a failure. There was little agreement on the key issues, with major polluters such as the United States and Canada which, to quote ICA executive director Eriel Deranger (Athabasca Chipewyan First Nation)  “continues to put profits over Indigenous rights while putting the planet at risk with another carbon bomb.” Everyone left disappointed, despite continuing negotiations two days beyond the anticipated December 13 end date. “I am disappointed with the results of COP25,” United Nations Secretary General, Antonio Guterres, stated. “The international community lost an important opportunity to show increased ambition on mitigation, adaptation, and finance to tackle the climate crisis.” 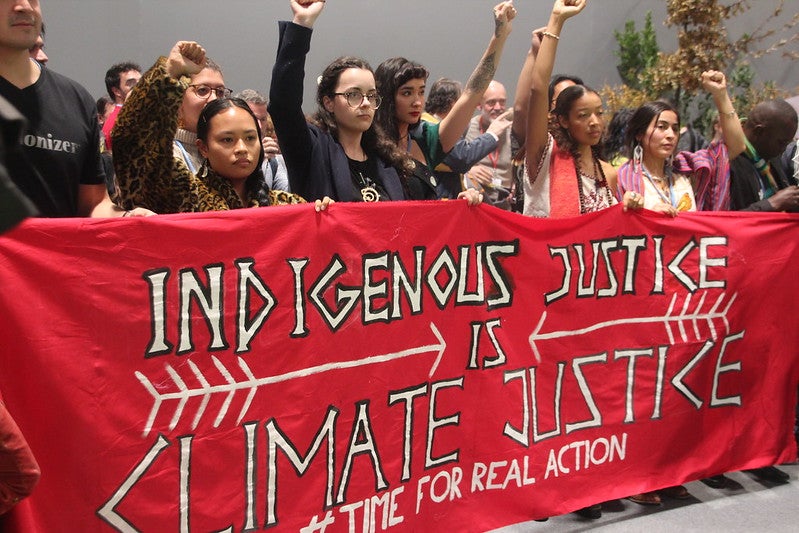 Moreover, COP25 did little to include Indigenous voices. According to Blaney, “actions [took place] all week from Indigenous groups, from the Arctic to the Amazon, and COP25 has been an incredibly hostile location for those actions. They have not been listening to us.” One particular incident stands out, and reflects the behavior Indigenous activists have come to expect from those they protest against: “there was an action where Indigenous women were kicked, they were escorted outside by security, they were prevented from reuniting with their children inside.” Further, Blaney stated, “this is the sort of criminalization that Indigenous communities on the frontline of fossil fuel development see every day, without visibility.”

At the same time as COP25, Minga Indígena—a group of organizations and Indigenous communities from across the world working to find solutions to climate change—organized an alternative summit with a theme “Traditional Knowledge for the Good of All Humanity: Indigenous Solutions to Climate Change.” At this Indigenous Peoples’ Summit, leaders spoke on current climate change-related issues in their communities, with discussions leading to the creation of a series of proposals then presented to the COP. ICA and IEN, among other organizations, were present at COP25 Minga Indígena. The former released this statement to the UN representatives at the conference:  “The patriarchal, capitalist and colonialist system has brought us into this climate crisis. We see many representatives of states considering only mercantile and financial profit, without taking into account the importance of life. For this reason, we understand that they are accomplices of all this destruction. If oil, gas, minerals and coal are in the depths of the earth, it is because Mother Nature left them buried there, to bring them into our environment is to contradict her wisdom.”

Indigenous communities are but one of the many marginalized groups are most affected by climate change. Although Indigenous land rights play a crucial role in protecting land and combatting the effects of climate change, Indigenous voices are regularly ignored or silenced by the larger international community. 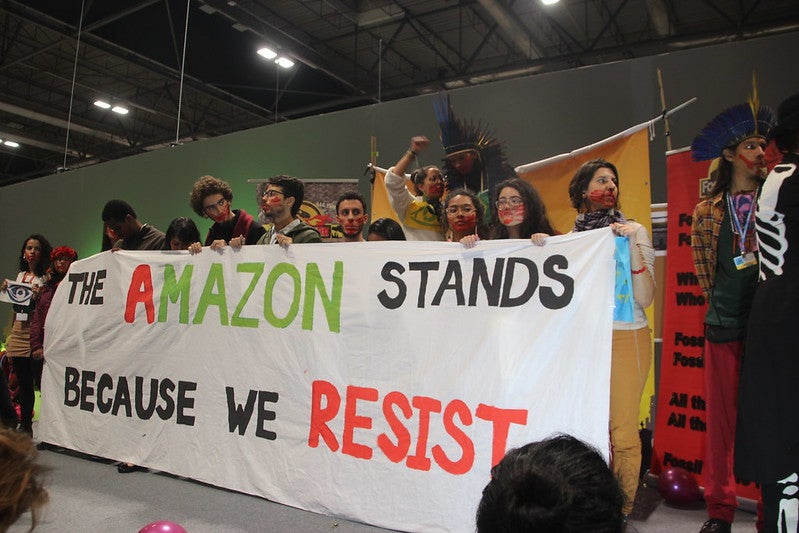 Blaney and other activists will keep fighting for the climate, though. “As Indigenous People, we’re still here,” she said, “because we’re doing it for our future generations, and the future generations of the planet. Indigenous delegates will continue to push for the protection of our lands and our waters and our soils and our mountains and our rivers on our frontlines, in our communities. COP25 is one outlet in which we can try to amplify our voices but that work is constant. We do it all because we are not defending nature, we are nature defending itself. In my home community, as a West Coast Indigenous person within so-called Canada, we face constant threat of invasion from pipeline development, and I will continue to work against that. I will continue to work for wild salmon, for our food sovereignty, for the ability of the next generation to sustain themselves off of the land.” This fight will occur on the “frontlines...at rallies and marches, and outside of the walls of these gigantic gatherings of governments that aren’t actually taking decisive and urgent action on the planet.”

Nation to nation discussion on topics such as a global carbon market or other, better solutions will now wait until the next COP meeting in Glasgow, Scotland, in 2020. While, policymakers remain hopeful that COP26 will prove more fruitful, Indigenous activist are pushing for bold action now as many grow impatient as the effects of climate chaos are painfully felt in frontline communities across the globe.

Top photo courtesy of Friends of the Earth International.