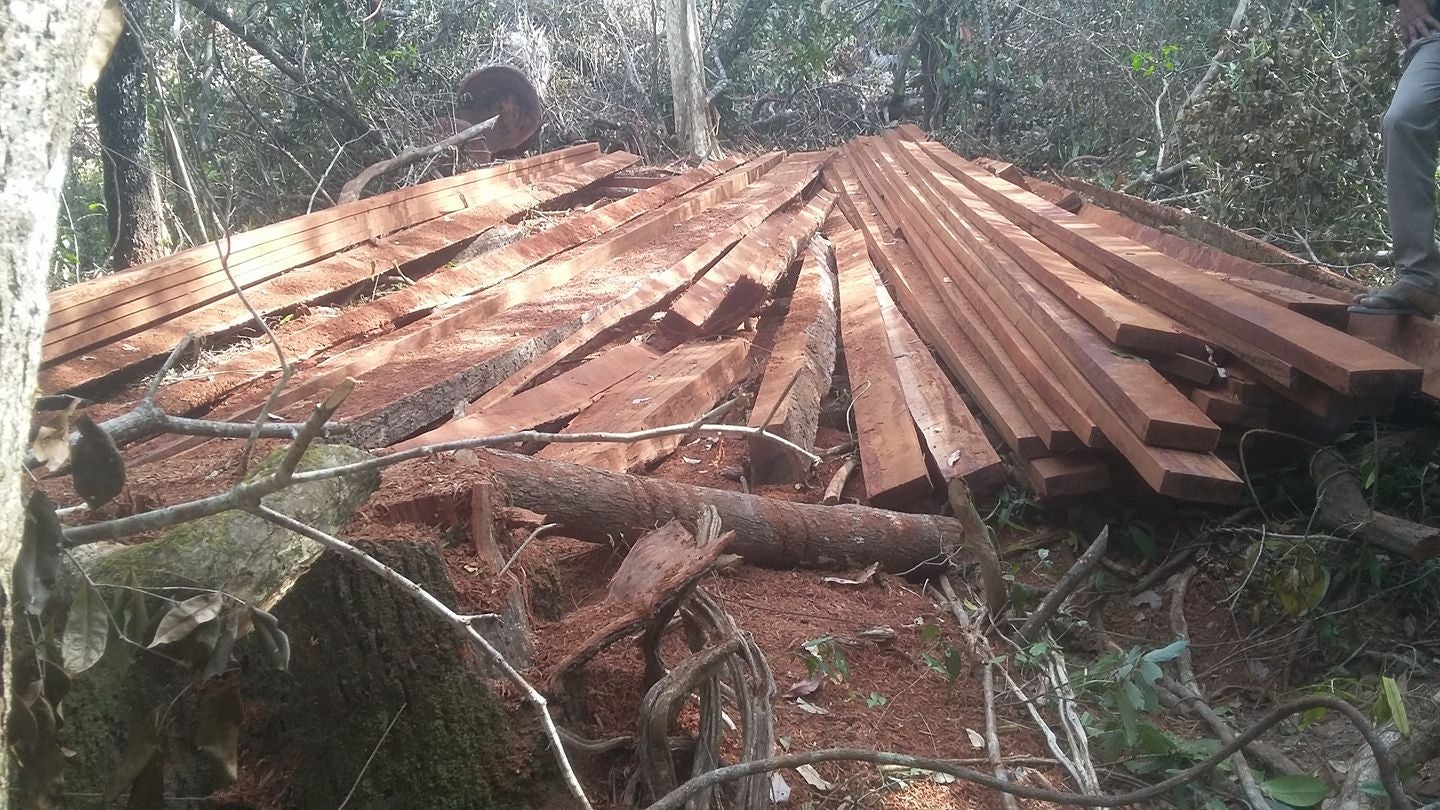 Cambodia continues to be a playground for large-scale timber looting schemes in Prey Lang forest, despite promises to crack down by the government. In early 2016 Cambodia’s Prime Minister Hun Sen issued a ban on all timber export in an attempt to reduce the devastating rates of illegal logging in the country. On 8 May, 2017 London-based Environmental Investigation Agency (EIA) delivered a report revealing the fact that the ban, apparently, did not bring any major change to the situation in which Vietnamese looters bribe Cambodian officials to continue smuggling timber across the border and subsequently selling it to Europe. Prey Lang is the largest primary lowland forest in the region, and home to over 200,000 Indigenous Kuy peoples who steward and protect the forest and use it sustainably.

After sustained lobbying by community organizers, large parts of Prey Lang forest were classified as a protected area by Prime Minister Hun Sen in May of 2016, with the stated attempt to curb illegal logging. But the recent report states that the illegal logging spans the enormous territories within the established Community Protected Areas (CPAs), Cambodia’s national parks and wildlife sanctuaries. Import of illegal timber between Vietnam and Cambodia has been carried out since at least 1986. The report preceded the anticipated agreement between Vietnam and the European Union meant to adequately safeguard the export of exclusively legal timber from Vietnam. Yet, experts say that the agreement is doomed to come out incomplete and inaccurate due to Vietnam’s consistent neglect of growing illegal timber smuggling from Cambodia, despite the ban.

In this context the Kuy peoples’ struggles for forest preservation are met with sustained repression on the part of institutions and corporations sustaining long-term crime schemes. Chut Wutty, Indigenous Kuy environmental defender fighting against illegal logging and land theft, was killed in Koh Kong province in 2012 at the age of 46. A founder of National Resource Protection Group (NRPG) and Prey Lang Community Network (PLCN), Wutty was one of the most dedicated forest protectors, envisioning a better future for his community, their home, the Prey Lang forest, one of Cambodia’s national treasures.

Wutty’s relatives say his activities drew the attention of timber corporations motivated to silence people like him. According to official eyewitness accounts, the military police and security guards working for Timbergreen Company came into conflict with Wutty by stopping his car, verbally abusing him and demanding he gives them the photo materials collected at the Timbergreen site. The Timbergreen Company had been developing the construction of Russey Chrum hydropower dam empowered by the government’s permit to cut down the Veal Bei forest grounds. Wutty died from gunshots released by the military officer. To this day, the investigation results on Wutty’s death are strikingly insufficient. Wutty’s son, Cheuy Oudom Reaksmey, is determined to find out who was the organizer behind his father’s killing. In seeking justice for his father, Reaksmey expresses hope that ‘there is no secret in this world’ and there is a chance to bring light to the case. Wutty is just one of many Kuy activists that have been violently targeted for their work. In 2016 Phorn Sopheak, a young Prey Lang Community Network activist, was viciously attacked by a stranger with an axe while routinely patrolling the Prey Lang forest. Sopheak’s leg was seriously injured, but one year later, police have still not taken action in investigating the case and finding the culprit. Sopheak expresses her concern about police’s inaction: “This worries me. If the authorities don’t act to investigate attacks like these, what will then happen in the future to my fellow PLCN members?”

Meanwhile, National Police of Cambodia made a bold move on 16 May, 2017, by putting forward the accusations against one of the most influential Cambodian businessmen, Kith Meng. Allegedly, Meng’s subsidiary company, Ang & Associates Lawyers, is suspected in covering timber laundering with official license to fulfill a dam project. The tycoon, notoriously known as ‘Mr Rough Stuff’, has built a wide network of connections allowing him to conceal illegal activities and operations.

It is uncertain whether any legal consequences will follow after the police’s statement. Meng appears to be strongly supported by Cambodia’s Prime Minister and other prominent figures in the country. Upon request by Southeast Asia Globe, Kith Meng refused to give any commentaries on the police report. Both the National Police and the Interior Ministry spokespeople also withheld their comments.

Despite the lack of reaction and immediate action from government structures and individuals involved in the issue, EIA’s findings on illegal timber looting operations between Cambodia and Vietnam could become a powerful information tool for environmental activists, policymakers, and consumer markets.

Stay up to date on the fight to save Prey Lang forest with the Prey Lang Community Network: