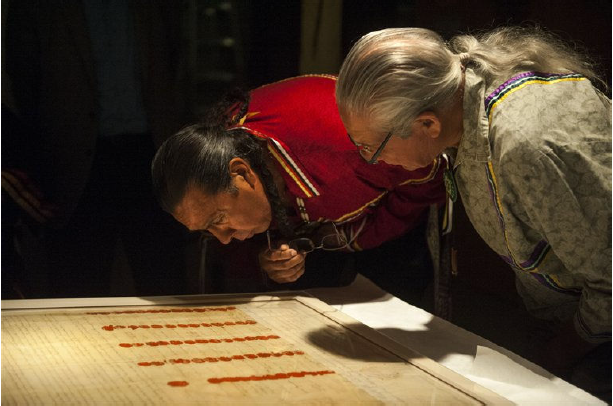 Since it’s opening, the National Museum of the American Indian (NMAI) has dedicated itself to the promotion of native identity and cultural understanding. Now celebrating the 10th anniversary of the D.C. museum, it is launching an ambitious exhibit this September that seeks to highlight the role of treaties between the United States and Native Nations.

Upon opening September 21, 2014, the exhibit “Nation to Nation: Treaties Between the United States and American Indian Nations,” will explore the Native diplomats and leaders who crafted some of the earliest agreements with the Founding Fathers.

Amongst the many artifacts expected to be on display, the exhibit will feature 8 prominent National Archive treaties from the approximately 374 ratified between the United States and Native Nations. These treaties will trace a timeline of diplomacy from first meetings to present, touching at the core of how U.S. and Native relations have impacted culture and development.

On September 8th, the NMAI welcomed the arrival of the Treaty of Canandaigua from the National Archives and Records Administration. Enacted between the Haudenosaunee (also known as the Six Nations or the Iroquois Confederacy) and the U.S., this treaty was signed by George Washington in 1794 to establish peace, friendship, and affirm land rights to the Haudenosaunee in modern day New York State.

The arrival of the historical document was met by Chief Oren Lyons, Ph. D., the Faithkeeper of the Turtle Clan of the Seneca Nations of the Haudenosaunee along with NMAI Museum Director Kevin Gover.

The exhibit, curated by Suzan Shown Harjo (Cheyenne/Hodulgee Muscogee), will be told from the perspective of the Native Nations and will be accompanied by U.S. testimonials. Visitors will be able to explore the exhibit through its five sections: Introduction to Treaties, Serious Diplomacy, Bad Acts, Bad Paper, Great Nations Keep Their Word, and Reflections.

In accompaniment to the historical treaties on display, “Nation to Nation” will feature more than 125 objects from the museum’s collection and private lenders. Some of the items on display include the Navajo blanket owned by General Sherman, peace medals awarded to Thomas Jefferson and George Washington, and the sword and scabbard of Andrew Jackson.

Few need be reminded of the significance treaties play in the relationship between the U.S. Government and the Nation’s indigenous. Some early treaties, enacted in the U.S.’s infancy, are still enacted in law.  The Treaty of Canandaigua, one of the Nation’s oldest, still delivers an annual payment to the Haudenosaunee from the Bureau of Indian Affairs to this day.

“Nation to Nation” will explore the complex relationship between the U.S. and Native Nations through a historical timeline of diplomacy and the written word. Treaties such as Canandaigua will be displayed to a wider audience than such documents have yet seen, in the hopes of breaking new ground in cultural understanding.

The exhibit opens September 21st at The National Museum of the American Indian in Washington D.C., and will be on display through Summer 2018.