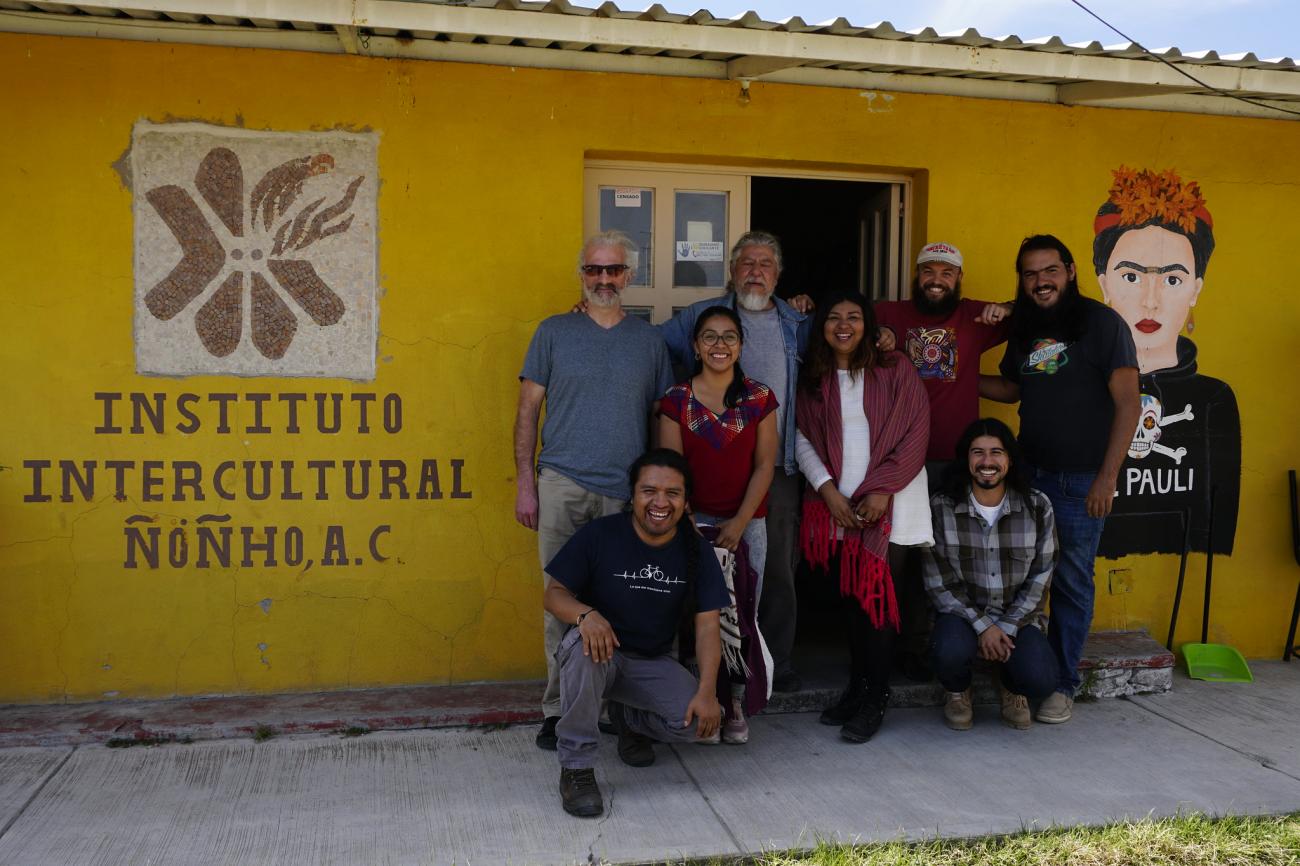 The hill of Ñädo, or Ñädo as we call it in Hñöñho, is our most important natural space, for us, Ñöhño (Otomí) Peoples. The Hñöñho language is a variant of the Otomí language spoken in the southern part of Querétaro, Mexico. Ñado is a conserved natural area in central Mexico and is a mixed pine-oak forest belonging to the trans-Mexican volcanic belt and politically divided between the State of Mexico and Querétaro. Indigenous communities belonging to the Ñöhño (Otomí) culture live around the forest there. Thanks to their stewardship this natural area has been preserved to this day through Indigenous knowledge and practices which are rooted in the appreciation and use of natural elements as the most important aspect of life.

The natural areas within the Trans-Mexican Volcanic Belt have been one of the most disturbed in Mexico since the population is more concentrated in the central part of the country, where the most populous cities are and demand more resources for their subsistence, neglecting the rational use of natural resources and their care. Although the volcanic belt is the most recently active physiographic landscape, it is also the one that is most in danger of space encroachment as the ecosystem is used in the cycle of resources needed by new communities. The Ñädo Forest is a case of the few remaining natural reserves, in a bioregional climatic transition zone, where there are accessible active ecosystems which are maintained by inhabitants of the surrounding Ñöñho communities who steward them in relationships of interdependence and reciprocity. 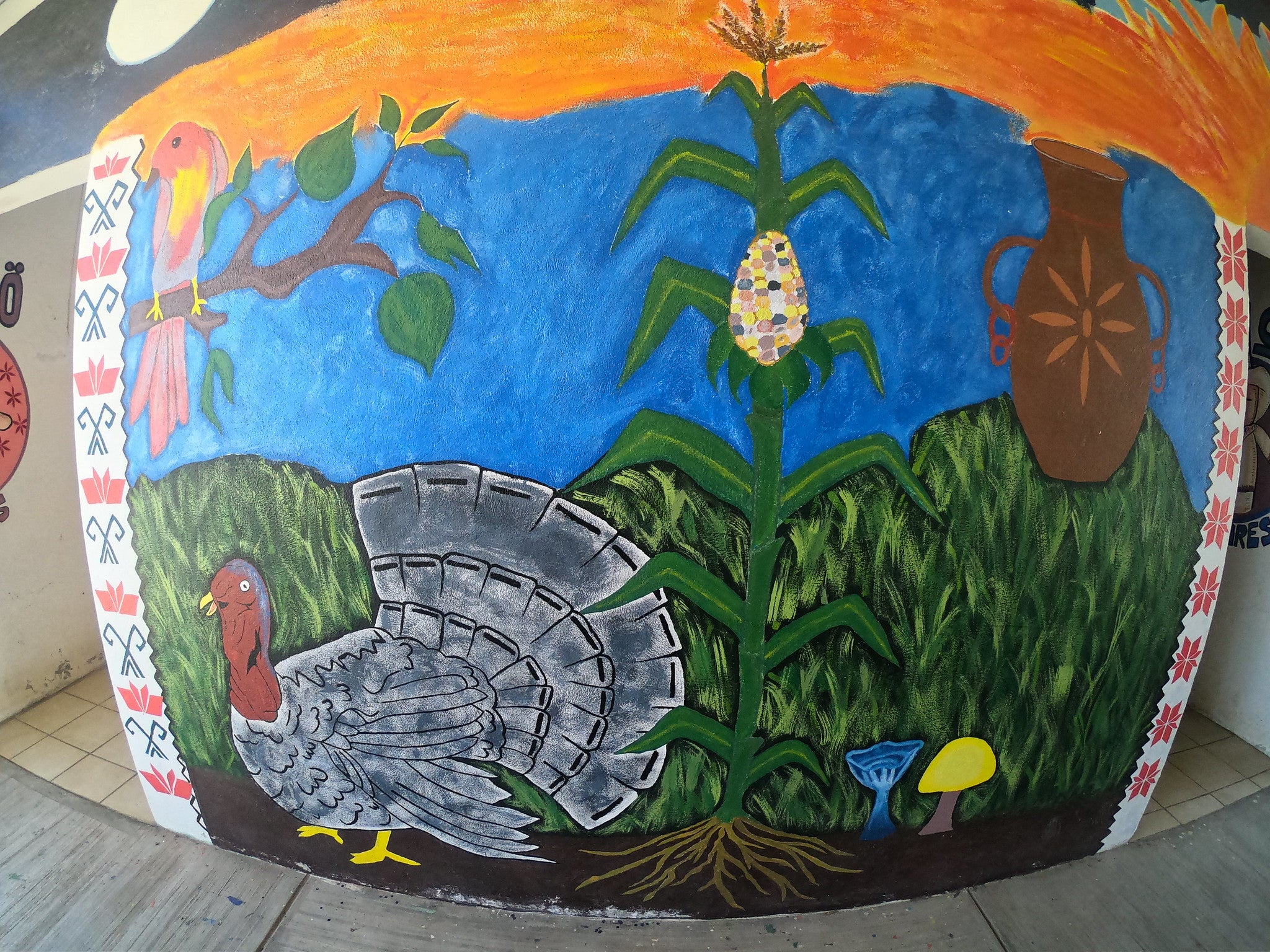 In this area, the predominant ecosystem is the mixed temperate forest, where there are two main types of vegetation: pine and oak. 153 species of 111 genera are recorded, divided into 57 families. In addition to the plants, the fungi in the reserve are extremely rich due  to their location of 3400 meters above sea level. More than 200 species can be mentioned (Robles-García et al., 2018) of which the most notable are: cashimu (Amanita caesarea), skunk fungi (Lactarius indigo), huitlacoche (Ustilago maydis), pericon (Cantharellus cibarius), pig's ear, (Hypomyces lactifluorum), belly or pambazo (Boletus), Morchella sp., pindicola fungus (Leccinum aurantiacum), es Dentinum sp.), Bird's feet (Ramaria sp.), Soldiers (Helvella sp.), and clavito. (PMRASQ, 2012).

Amphibians and reptiles make up the largest populations in the reserve but are also the most threatened with 17 species in the at-risk category, among which the genera Thamnophis, Crotalus, and Lithobates stand out. However, there are many species of all vertebrate groups including lynxes, migratory birds, and fish (PMRASQ, 2012).

Currently, in the communities around the Ñädo, the Ñöhño worldview prevails. Ñöhño cosmology is based on a three-dimensional structure. Trinitarian thinking lives in the language and the biocultural tradition of the Ñöhño Peoples. Nzaki is a concept universalized in the Ñöhño worldview, as it shows that everything has vitality and can be affected and restored. All beings are just as important as humans and that is why neither the verb nor the notion of being exists among the Ñöhño Peoples. For the Ñöhño, things are loaded with meaning, they are represented and named for what they are, with the least subjective social-human load (Perez Lugo, 2007).

In the Ñöhño language, there are categories applicable equally to everything like living, plants, animals, and humans. Vitality and work for mutual help are the same concept, mui, used by communities for their interaction. Life itself is collaborative work. The community is the living totality interacting, thus, each creature has its representative. Kha, the supreme creative energy of everything, managed to adapt the human being to life until the third generation. Therefore, it is an energy willing to improve. The supreme energy can also be wrong, that is why in the Ñöhño cosmovision you have the opportunity of making mistakes and learning, improving in each moment of existence. That is one of the main meanings of existence for Ñöhño communities (Perez Lugo, 2007).

The Ñöhño culture today manifests its essence in the rituals of artistic and cultural expression. The main trades and dedications of community life are centered on working with the land and animals, creating embroidery, pottery, sculpture, and participating in dance. For community life, it is essential to continue to engage in these activities. They are not merely a job, but a human reproduction of natural and symbolic elements. It is about the contribution and continuity of the human being as part of Nature. From this perspective, humanity also provides ecosystem services, and art is a human manifestation of Nature. 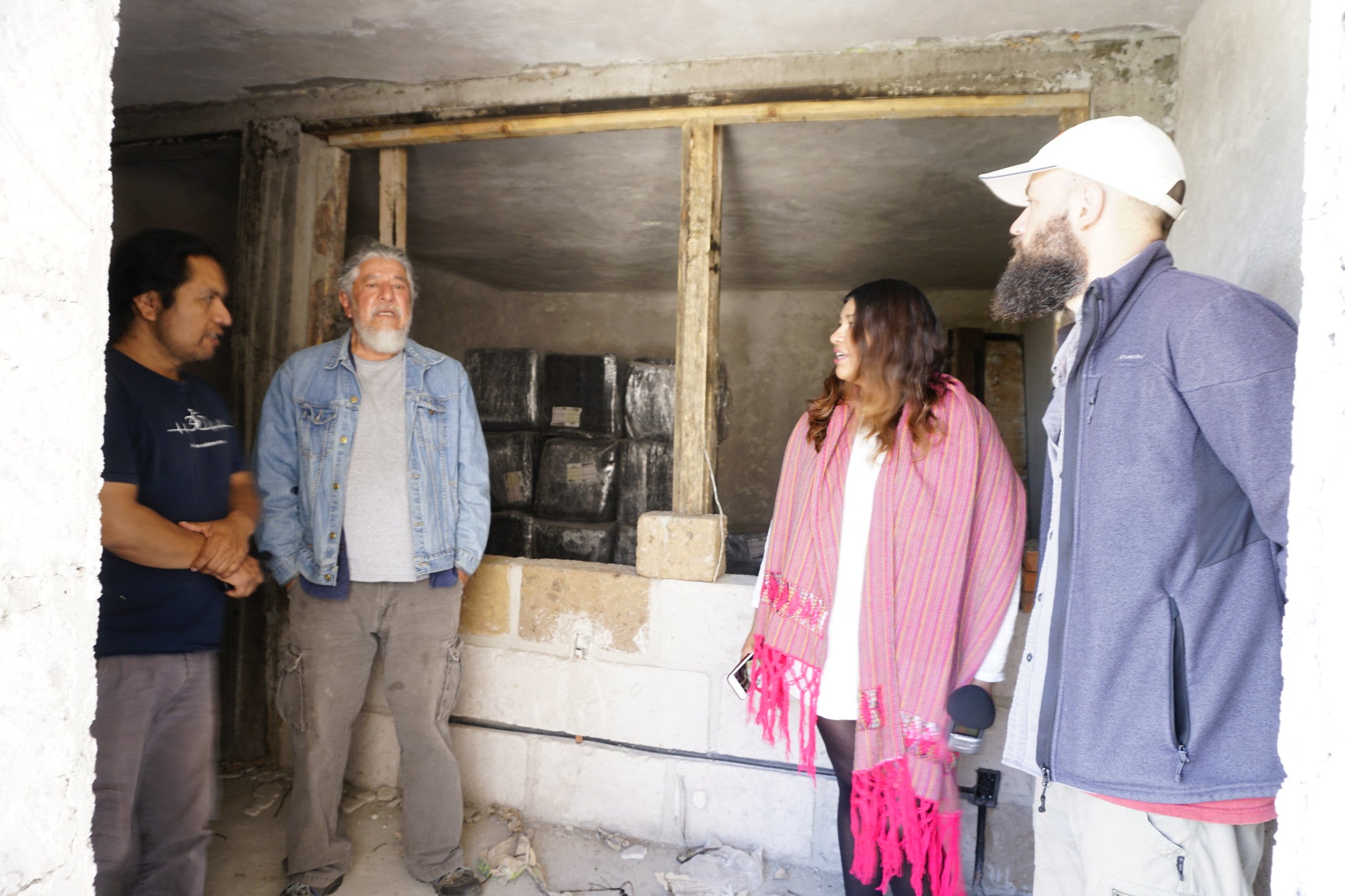 How do we relate to the Ñädo Forest?

“The mountains of the forest provide us with the wood of the oaks to cook our food, and the wood of the strawberry tree to cook our clay figures. The forest floor in the region provides us with an abundance of various fungi. The foothills of the forest, where the water begins to drain, provide us shelter for our houses, we build them from the colored rocks that are under the ground and above the ground, we take advantage of the clays of the earth to make mud. The plants and animals that live on the hillsides or in our houses, we give them their place, we name them by what they sound like, we embroider them and we value them in our art.”

The communities who live around the forest make use of the forest resources in various ways. The most widespread is the collection of dry branches as firewood for food preparation and cooking, as well as large and long branches for construction material. Another form of use is the harvesting of logs for the burning of clay figures, an activity that has been practiced since the inhabitants of this area lived in caves. The wood is also harvested in preparation of lamb barbecue in a stone oven. Another common activity is the transformation of wood into charcoal, through kilns that are set up between the open areas in the forest.

Community members around the Ñädo usually collect mushrooms in the rainy season. It is possible to find more than 200 species of mushrooms of which just over 30 are used for consumption or medicine (Robles-García et al., 2018). They are mainly consumed locally and to a lesser extent sold in nearby cities or at the foot of roads. Since 2018, families of the Xajay neighborhood have organized in the Ngu Hyete - Casa de los Hongos group to offer services to tourists, sell food prepared with mushrooms, dehydrate mushrooms for sale at markets after the rainy season.

The cultivation of corn occurs generally one season per annual cycle, in the summer when it is humid. The altitude and the forest cover near the plots and the potato-chile cornfield- squash-bean help the plants grow. Over the past seven years, due to the increased interest in the conservation of corn and its culture, the Fair of the Native Corn and the Milpa has been organized in five of the communities around the reserve where the land and the farmers are celebrated. Also, seed exchanges are carried out at the regional level with the participation of producers from Tlaxcala, State of Mexico, Puebla, Michoacán, and Querétaro.

There are great challenges and threats to the ecosystems in the Ñädo and to the way of life of Ñöñho communities due to economic, environmental, and social issues. We consider that there are elements that exist in our own communities and in the actions of education, entrepreneurship, communication, and collaboration to address these challenges and continue to have the vital link with the Ñädo and its forests. Among the activities for conservation and relationship with the forests, there are renewed practices that are making a qualitative leap in the public interest for the environment and its evident relationships with health and well-being. For the past two years, reforestation days have been carried out in the Ñädo with native acorns from the forest itself, organized and promoted by families locally, differently from what was done in the last 30 years when it depended on government secretaries and consisted of planting fast-growing conifers that displaced the native flora. The intention is to recover deforested or burned areas with native plants developed near the forest itself, with its soil, its water, and its favorable climate. During the planting season, local residents participate and sometimes support groups from other communities, some near the forest, others rather far away. We are learning about and sharing various reforestation efforts and experiences and perspectives continue to be shared during the fairs. Recently, community cultural activities such as mushroom and native corn events and other spaces such as forums, are where shared efforts and needs are found in an atmosphere of friendship and participation. 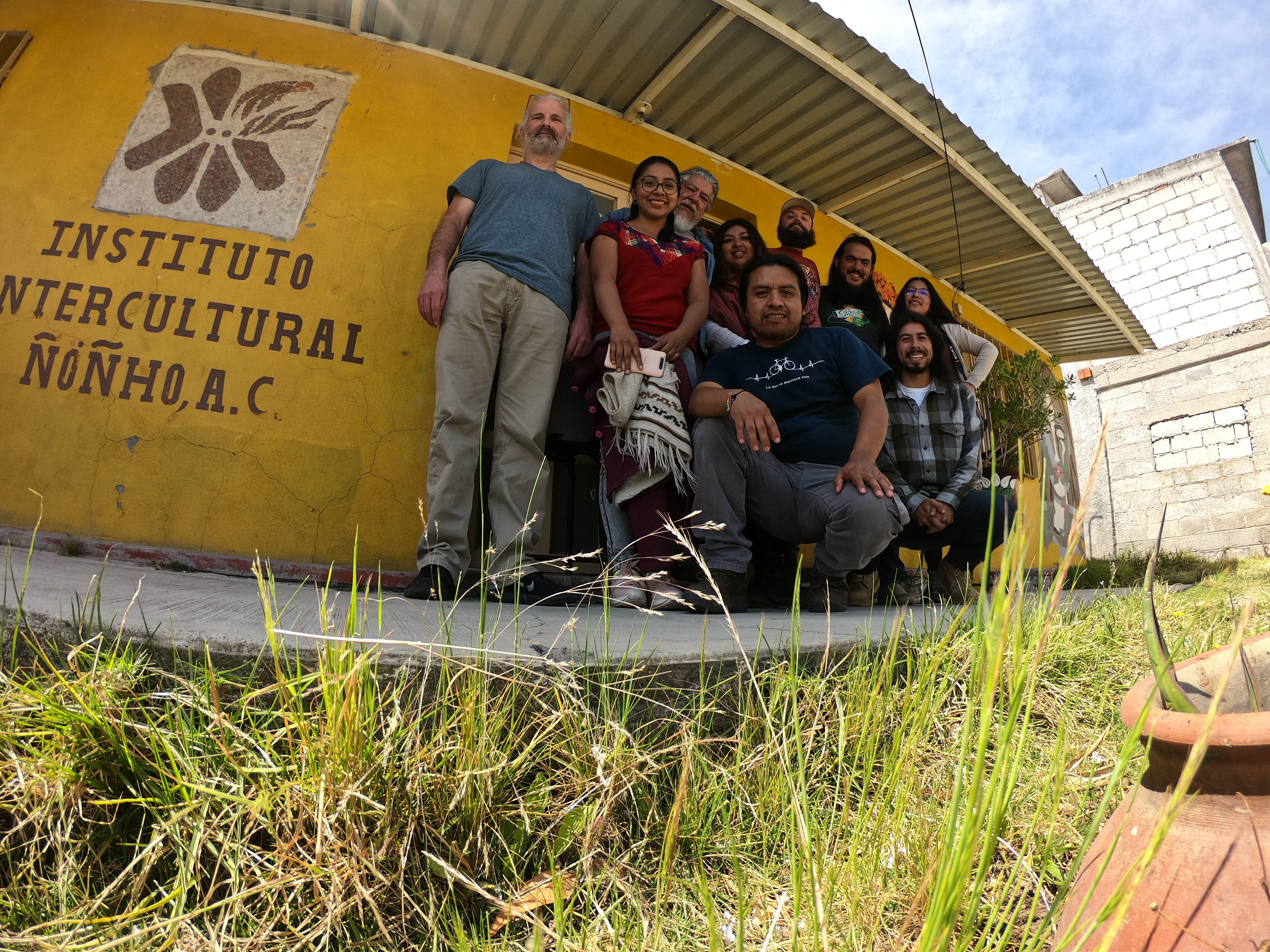