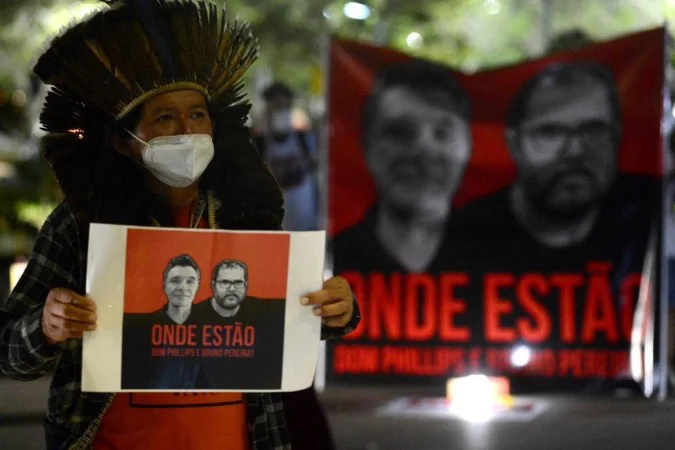 On June 4, 2022, Bruno Araújo Pereira, 41, and Dom Phillips, 57, went missing from the Itacoaí River in the Vale do Javari region in the extreme west of the Amazon, on the border with Peru. On June 14, 2022, their bodies were found.

Vale do Javali territory is “an Austria-sized expanse of rainforest that is home to more than 20 Indigenous communities, the majority uncontacted, and lawless wilderness” Which means the Brazilian State fails to ensure security and protection for people and to the environment.

Pereira, a consultant for the Union of Indigenous Peoples of Vale do Javari (Univaja), was accompanying Phillips, a British journalist, who was in the region doing research for a book. In a recent article on the men’s disappearance, The Guardian quoted Brazilian president Jair Bolsonaro as saying “something wicked” was done to them.

After facing criticism and international pressure for the lack of effort in the initial search for Philips and Pereira, State authorities eventually mobilized military troops and resources to find them. 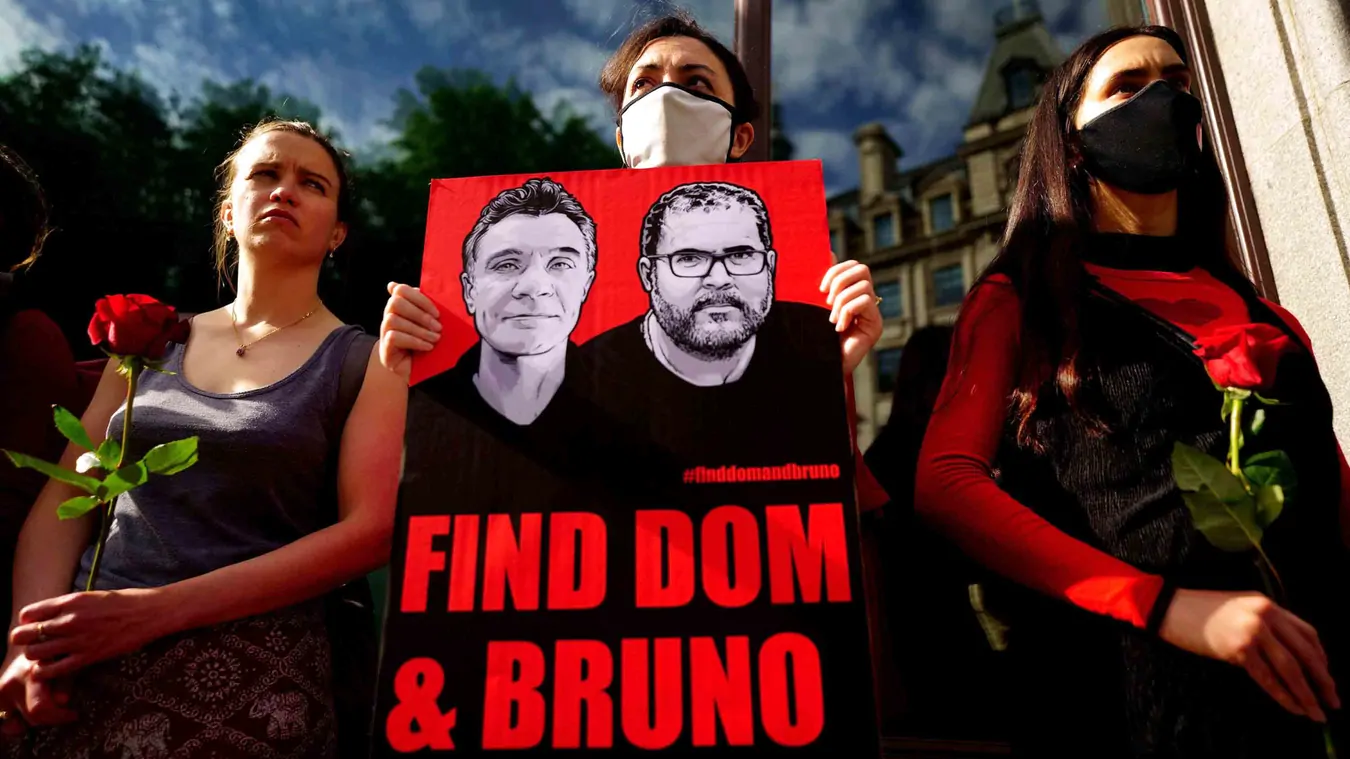 At a vigil in front of the Brazilian embassy in London, supporters of the journalist and his companion demanding that the two men be found. Two bodies have since been recovered that are believed to be Pereira and Philips. (Credit: Picture Alliance.)

The region where Pereira worked and had brought Philips to conduct his research is a well known Indigenous territory that, in recent years, has increasingly been encroached upon by groups involved in animal trafficking, illegal fishing, and other activities that violate Indigenous rights.

Despite having their lands and rivers demarcated and enjoying constitutional protection, Vale do Javali’s Indigenous organizations often must carry out the dangerous work of protecting their lands alone. Such is the case of Univaja, an Indigenous association that protects its member communities from encroachment via surveillance groups. Univaja’s actions are essential because the communities receive no support from the National Indian Foundation (FUNAI).

One of Univaja’s surveillance groups is the Equipe de Vigilância da Univaja (EVU), which is composed of the Marubo, Matís, and Kanamary Peoples, who are especially protective of the uncontacted Peoples in the region. (The Vale do Javali has the highest number of Indigenous Peoples living in voluntary isolation in the world.) EVU provides the members of the team with low caliber hunting weapons and monitoring equipment.

Pereira had worked for FUNAI but was fired a few months prior to his disappearance for taking a leave of absence to assist EVU in using drones to capture the crimes taking place inside the Vale do Javari.

FUNAI also has a base in the region on the Ituí and Itacoaí Rivers, where National Security Force officers and volunteers combat illegal activity on the Vale do Javari Indigenous land. Trespassers are usually linked to criminal activities such as illegal fishing, mining, animal trafficking, and drug trafficking.

Today, after more than 20 years of conflict, including the deaths of whites by uncontacted Korubo Indigenous people, several Indigenous and environmental activists are suffering threats and prosecution. The Brazilian State is failing to guarantee them justice. 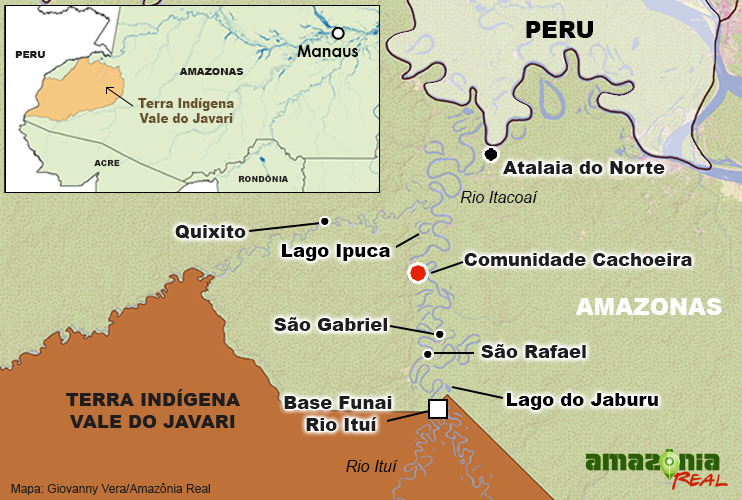 Map of the region provided by the portal Amazonia Real/June 2022.

Indigenous Peoples Are the Target

According to the Missionary Indigenous Center, which, despite its ties with the Catholic Church, has become an ally in advocacy for human rights and Indigenous rights, conflicts related to territorial rights more than doubled in 2020 compared to 2019, from 35 to 96. Predatory exploitation of Indigenous lands and actions by the federal government have encouraged increased attacks on Indigenous territories.

This year, Cultural Survival and several Indigenous organizations participated in the Universal Periodic Review of Brazil, denouncing the Bolsonaro government for environmental and human rights violations.

Bolsonaro and his ministers have delivered many speeches and rhetoric that led independent groups to invade Indigenous lands for mining and logging. This promotion of mining and exploitation of the forests, rivers, and Indigenous lands occurred during the early days of the COVID-19 pandemic and contributed to the increase in deaths of Indigenous people, leaving several communities without their Elders and leaders.

The lack of legal security of those who defend the environment, especially Indigenous Peoples, has been a constant refrain in the Bolsonaro government, which has not done anything to promote the safety and well being of Indigenous Peoples.

According to a report by the Land Pastoral Commission, 32 Indigenous leaders and 4 public servants working with Indigenous communities received death threats in 2021. Bolsonaro’s rhetoric in favor of the predatory exploitation of Indigenous lands and mining within these territories, along with direct actions by the federal government, have encouraged attacks on Indigenous territories.

The following is the list of Indigenous people and allies who received death threats in 2021, according to the Pastoral Land Commission:

This list, and the murders of Pereira and Philips, represent another sad chapter in the history of the defenders of Mother Earth.

Less than two weeks after their disappearance, two bodies were recovered in Vale do Javali and identified as to Pereira and Philips. The police received leads from a man suspected of murdering them. To date four men have been arrested.

International media attention from this case is likely to recede after the suspects are arrested and tried, but Indigenous Peoples still need protection and security. Cultural Survival expresses our compassion for the families of Pereira and Philips, and we urge the authorities to protect the Indigenous Peoples in the Vale do Javali.