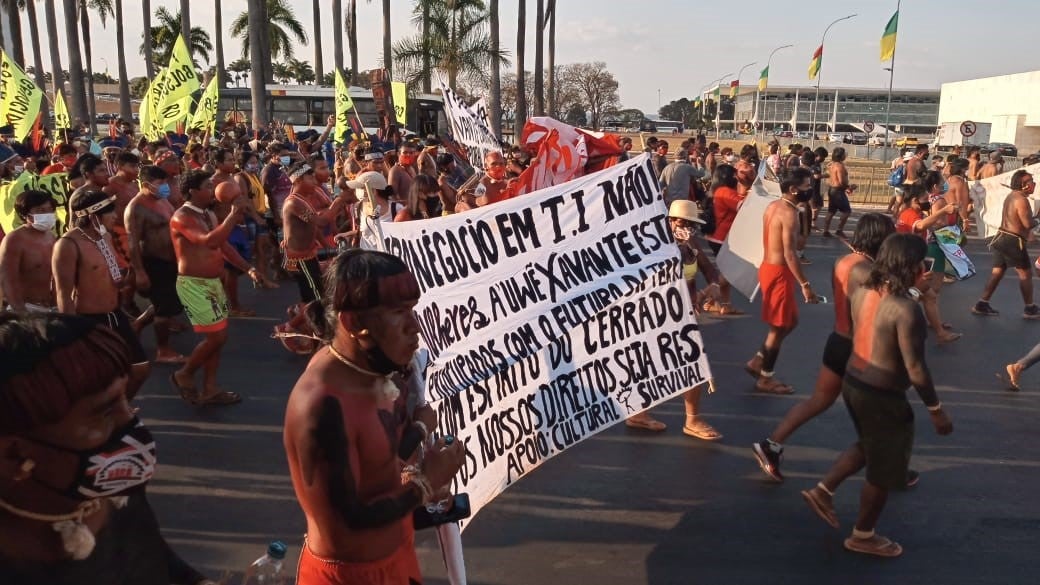 Each UN Member State is examined under the Universal Periodic Review every five years. During its review, a State is to inform the other states how it has adhered to human rights standards and obligations and implemented recommendations from previous cycles, and it has to answer questions from other States and civil society about recent human rights developments in the country. The UPR is a unique process that involves all 193 UN Member States. In 2017, when Brazil was examined, the UN High Commissioner for Human Rights Prince Zeid Ra'ad Al Hussein recommended the country to:

Even though the country has taken steps to make improvements on human rights, in the last three years under the Bolsonaro administration, several alarming setbacks have taken place. Cultural Survival’s report, informed by Indigenous organizations and communities, highlights the violations that Munduruku and Quilombola Peoples have suffered.

The report documents how the Bolsonaro government continues to threaten Indigenous Peoples and the environment by pursuing policies and actions that are not just harmful to rivers, forests, and animals, in particular to forest areas in the Brazilian Amazon, but also to the lives and safety of Indigenous and Quilombola communities in those areas. The demarcation of Indigenous and Quilombola territories–a process of recognition, delimitation, and administrative regularization of Indigenous lands–has been debilitated and halted by Bolsonaro since January 2019, a blunt refusal to follow the Constitution and international human rights mechanisms.

The stakeholder report also covers how Fundação Nacional do Índio (“Funai” - Indian Affairs agency), a federal agency responsible for respecting, protecting, and fulfilling the rights of Indigenous Peoples to their lands and territories, became, under this government, subordinated to the interests of missionaries, the agricultural sector (“ruralistas”), and mining interests. Bolsonaro and his ministers have delivered many speeches and communications that led independent groups to invade Indigenous lands for mining and logging. Furthermore, this promotion of mining and exploitation of the forests, rivers, and Indigenous lands occurred during the COVID-19 pandemic and contributed to the increase in deaths of Indigenous people, leaving several communities without their Elders and leaders.

Because of the 22 percent increase in deforestation between 2020 and 2021, the largest deforestation rate in 15 years, the Munduruku Peoples and other Indigenous Peoples are struggling to keep their homes safe. Illegal mining is common throughout the Amazon and is happening on Munduruku, Kayapó, Yanomami, and Xikrin do Cateté lands and people are suffering as a result of mercury contamination of water sources and eating contaminated fish and have experienced headaches, skin conditions, food poisoning, and high rates of birth defects.

The Rio dos Macacos Quilombola community has also been discriminated against and overlooked by local authorities and the justice system. They have no access to basic services like ambulances and schools. After the construction of the Aratu Naval Base in the early 1970s in their territory, much of the Rio dos Macacos community was forcibly displaced. The Navy construction split their territory by building military residences and houses in the middle of Quilombola land, dividing the community.


The report makes 16 recommendations to the State of Brazil in regards to Indigenous Peoples, to:

Ahead of and at the review in November 2022, all UN member states have an opportunity to press Brazil on its human rights record, which is full of flagrant violations of environmental and Indigenous Peoples’ rights. We also urge civil society all over the world to join in supporting Indigenous and Quilombola communities in Brazil.