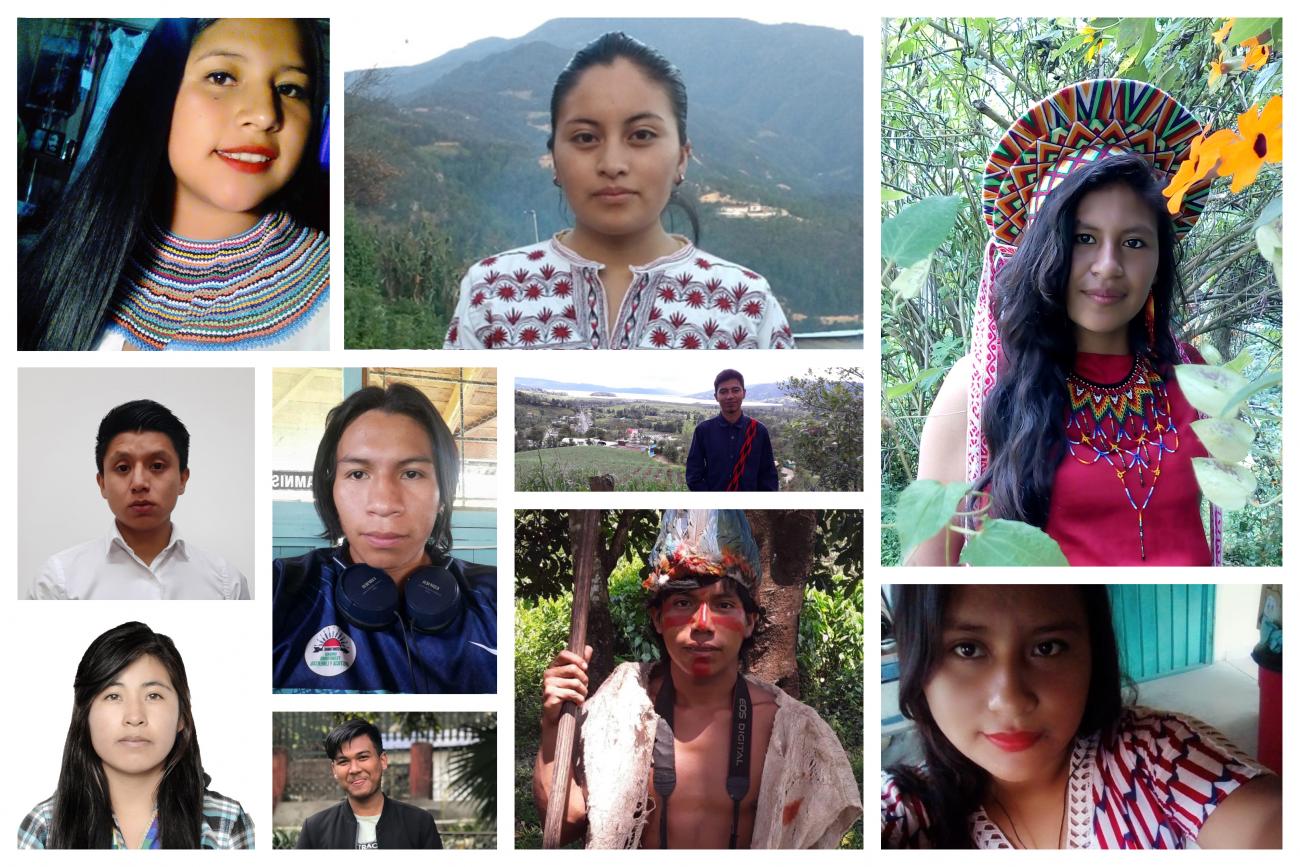 Cultural Survival is pleased to announce our 2020 Indigenous Community Media Youth Fellows, as part of the Community Media Grants Program. Our Fellowship Program supports young Indigenous leaders between the ages of 16-26, who are eager to learn about technology, program development, journalism, community radio, media, and Indigenous Peoples’ rights advocacy. This is the third year of the Fellowship Program, which has awarded grants to 22 youth to date. Capacity of the fellows is built through trainings, community radio station exchanges, and conference attendance. 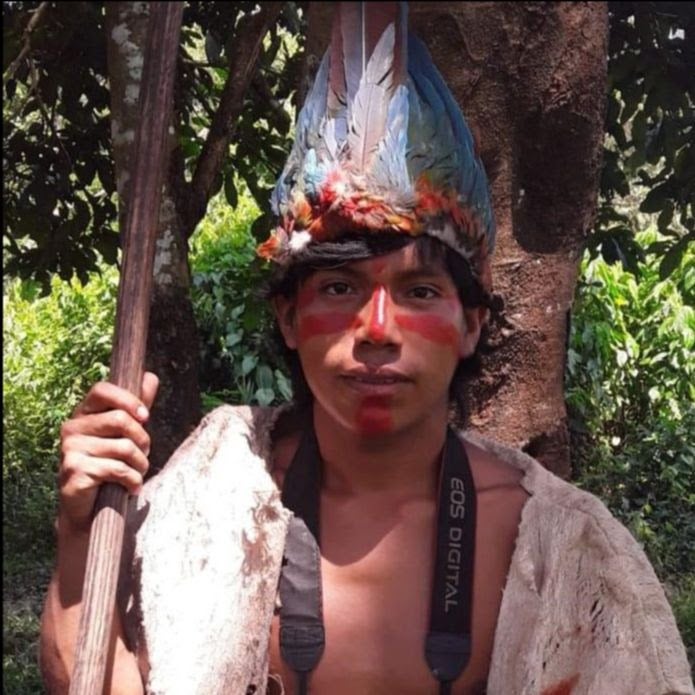 Lino, 24, is from the Llanchamacocha territory of the Sapara Nation in the province of Pastaza, Ecuador. As a husband and father to four children, he has dedicated his life in protecting the Amazon so his children can continue to live in harmony with nature. He is the communications coordinator for the Tsitsanu High School and provides students with alternative communication tools in recovering their culture and defending their lands.

His fellowship project will focus on strengthening the Sapara culture, language, and communication through organizing training workshops for youth in video and audio production. Lino will facilitate the construction of a communication center where workshops will be held and will produce a video series on Sapara dream knowledge. 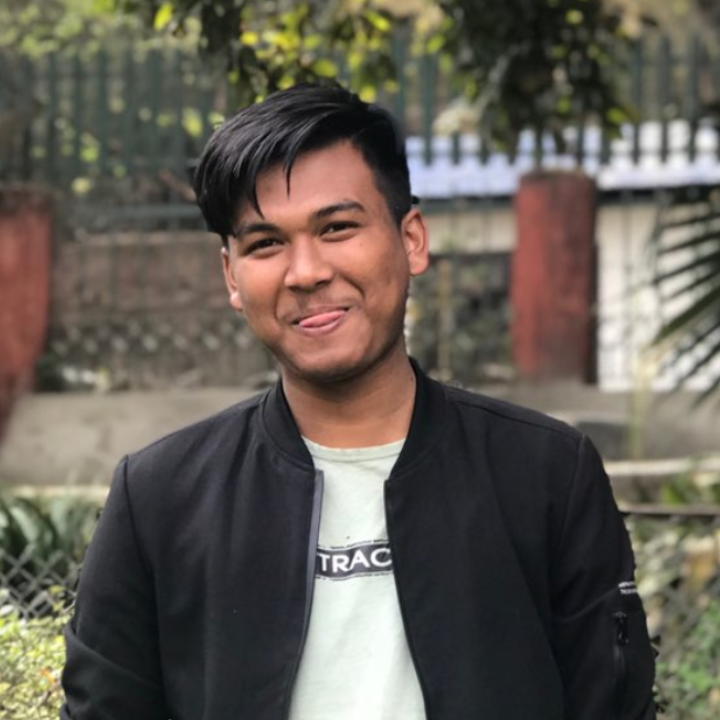 Arnab, 21, is from Gadhawa Village in the Dang district of Nepal. He is currently in his third year of law school, fluent in Tharu, Nepali, Hindi, English, and Awadhi. As a fond reader of poetry who enjoys literature, he advocates for Indigenous languages in Nepal. Arnab is currently working as an executive member of Kathamandur Valley Committee of the Tharu Student Society and actively discusses social, legal, political and economic issues related to Indigenous communities with his peers

His youth fellowship project, entitled “Vanishing Language of Kusunda People,” will produce a radio program series about the Kusunda Peoples focused on promoting and strengthening their critically endangered language and culture. The program will be broadcast at three community radio stations and he will invite members of the Kusunda community to participate in a live discussion on air. 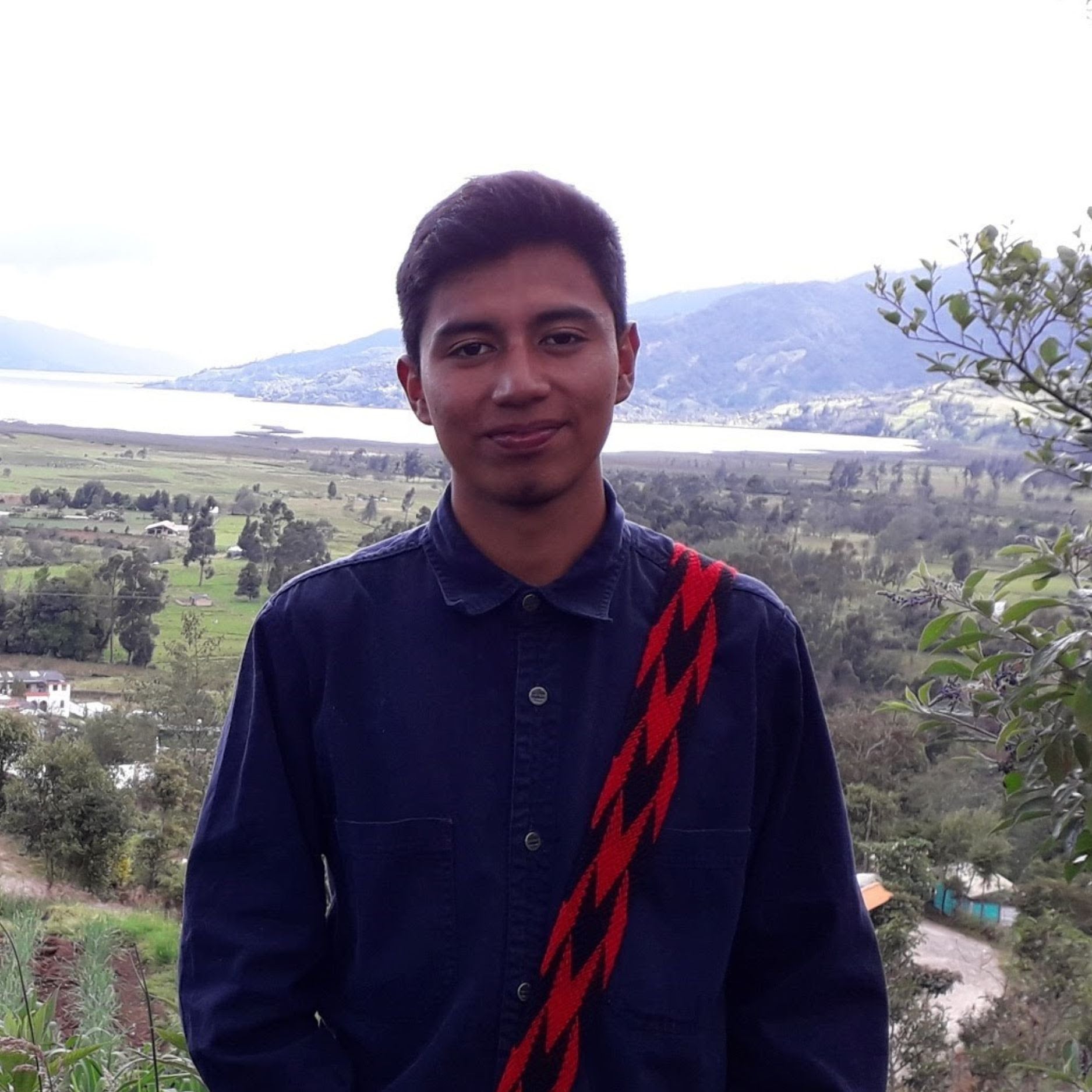 Juan, 19, is from the Pachawasi reserve of Colombia. When he was only nine months, due to threats from armed groups, his parents fled to Ecuador where they spent most of his childhood until 2008, when his parents decided to move back to be with his grandparents in Colombia. There his parents formed the Quillasinga Agroecological Reserve called "Pachawasi”, cultivating organic crops and reforesting the land. In 2018, he graduated from the Educational Institute of El Encano and started learning from the “chasquis” guardians of knowledge. He is currently studying agriculture to deepen his knowledge of the land.

His fellowship project is entitled “Sacred Plants, Traditional Medicine of the Siona, Cofan, Huitoto, y Quillacinga Peoples” aims to protect the sacred ancestral medicine plants of his people. He will be producing six radio programs about the three sacred plants (ayahuasca, mother coca, and grandfather tobacco), interviewing Mamas and Taitas from four communities in the department of Nariño. He will also facilitate capacity workshops with youth in the community on radio production. The final programs will be broadcast at the local Radio Quillasinga 106.1 FM. 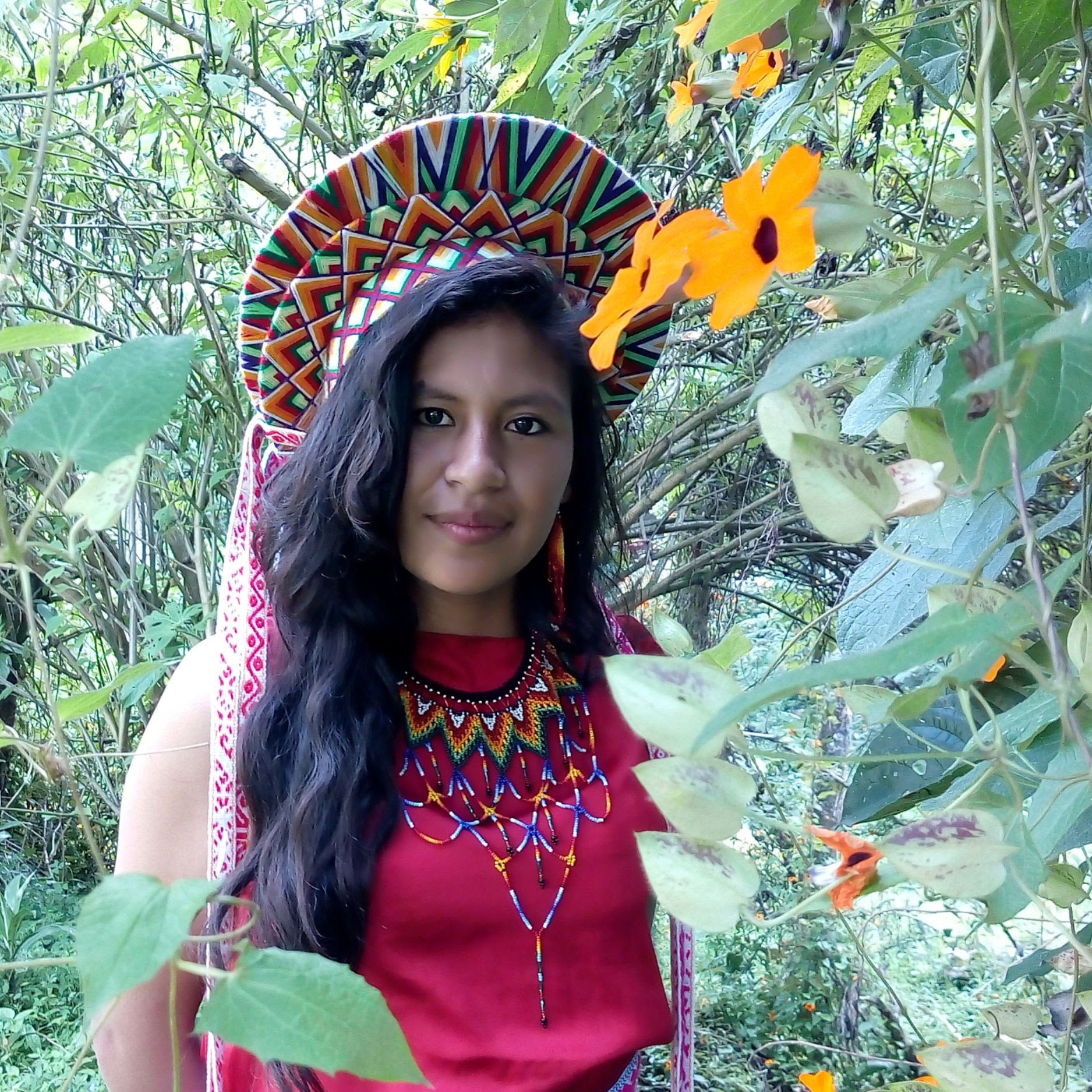 Lorena,  23, is from Sibundoy Putumayo, Colombia. She is in her final semester of studying architecture from the National University of Sedé Manizales. Lorena is passionate about the craftsmanship of her people and ambitious in creating a better way of living for Indigenous women.

Her fellowship project entitled “Jajetsam Bëngbe Juabnac” (Weaving the Thought of Our Elders) seeks to strengthen and ancestral knowledge and history through storytelling at a local radio station, Radio Waishanya. Lorena will organize four artisan workshops with youth to document ancestral stories, colors, symbols and meanings to reinforce the transmission of ancestral knowledge from one generation to another. She will produce a radio program series from these exchanges to generate interest and to strengthen the identity of Kamëntsá people. 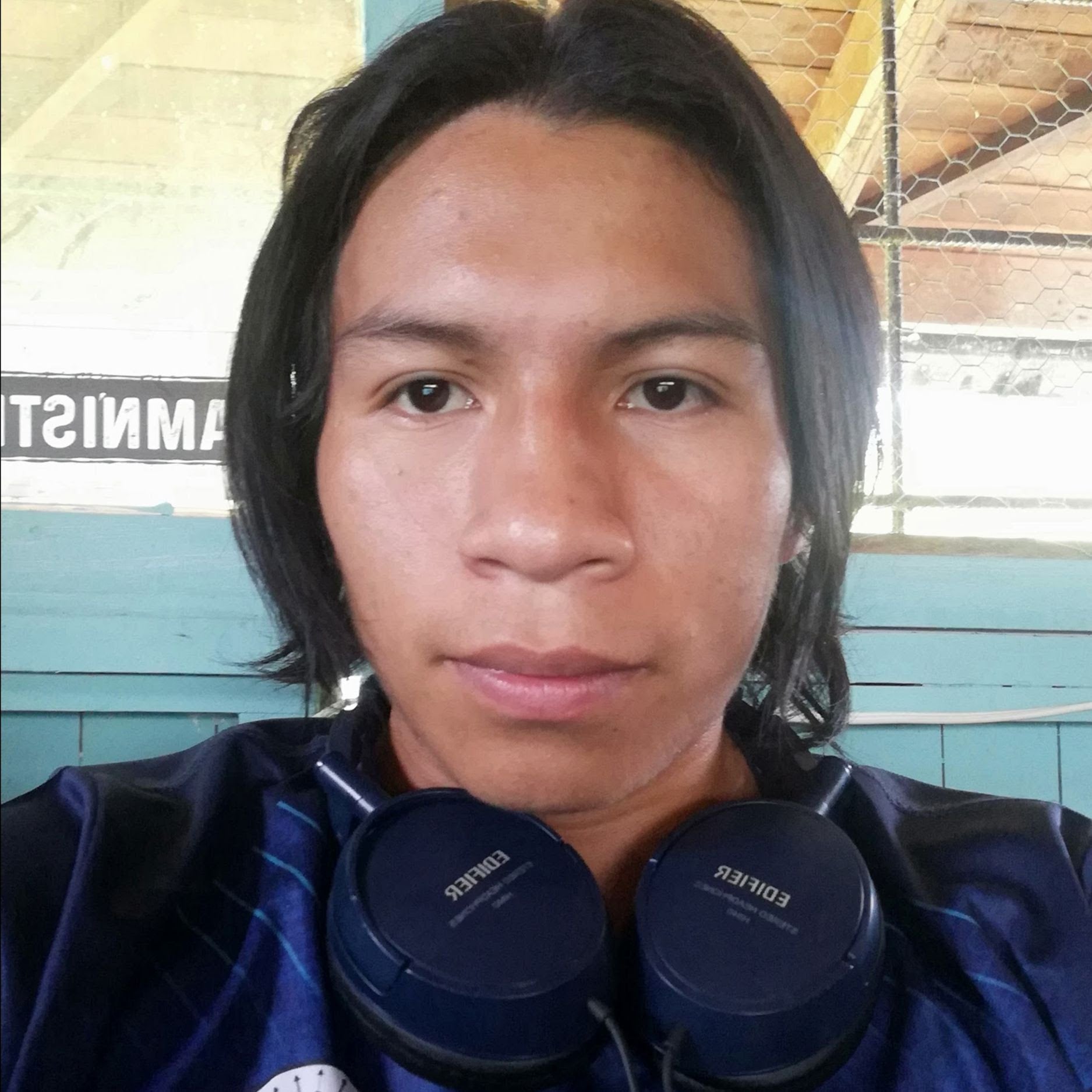 Bryan, 23, holds a bachelor’s degree in accounting and administration and is the communication assistant for the Confederation of Indigenous Nationalities of the Ecuadorian Amazon (CONFENIAE). He has received training in radio production, digital media and land rights. 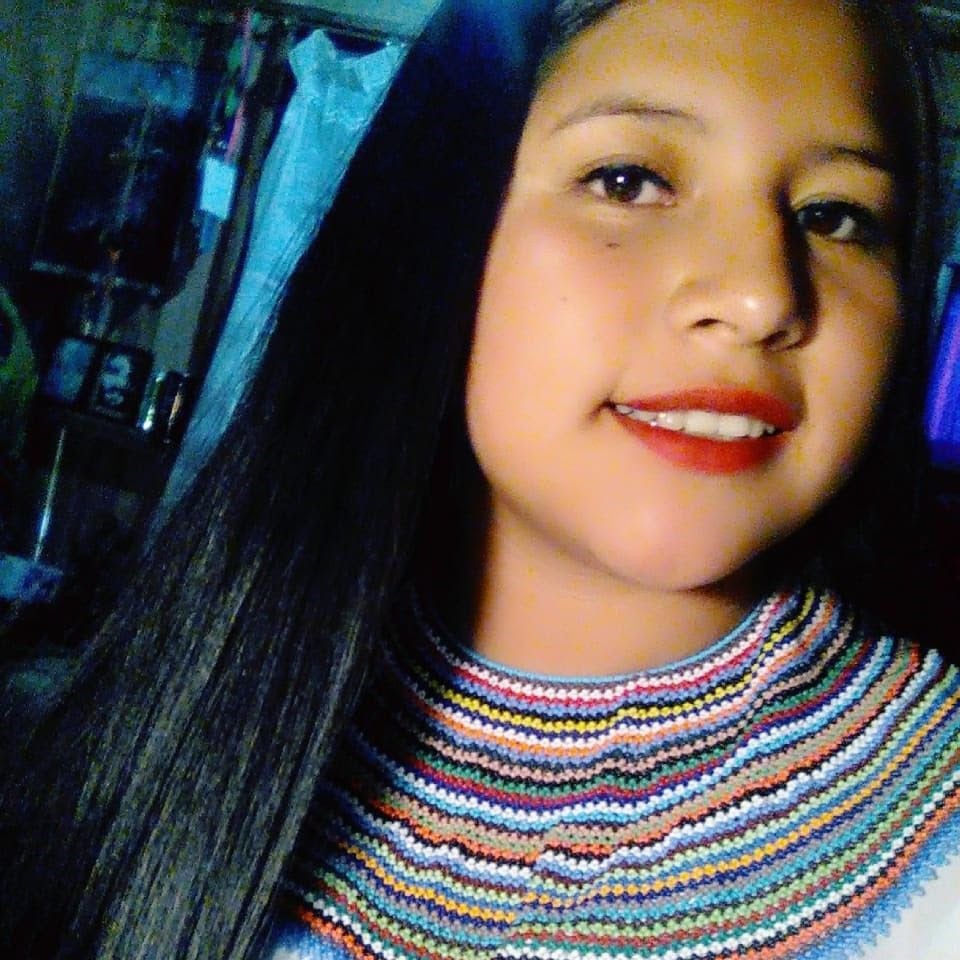 Maholy, 19, grew up in harmony with the Amazon and is passionate about protecting the natural world. As a young activist, she fights for the rights of her people working with youth on gender issues, defense of ancestral territory and human rights through art, dance, and music. She considers herself a feminist and is active in many organizations amplifying the voices of young Indigenous women. Her experience and struggle has allowed for her to continue defending the cosmology and philosophy of Sumak Kawsay (good way of living) from threats of consumerism, and fighting exploitation of all ancestral territories.

Their fellowship project entitled “Wawa Yachay” aims to educate and promote the Kichwa language among children and youth. Together with youth, they will produce a radio program series about building awareness of their native language through storytelling of community. The youth will receive training in radio production and editing. In addition, the program will create a space where listeners can interact by sharing their experiences and ideas about the importance of the Kichwa language. The programs will be aired on La Voz de CONFENIAE, an internet radio station. 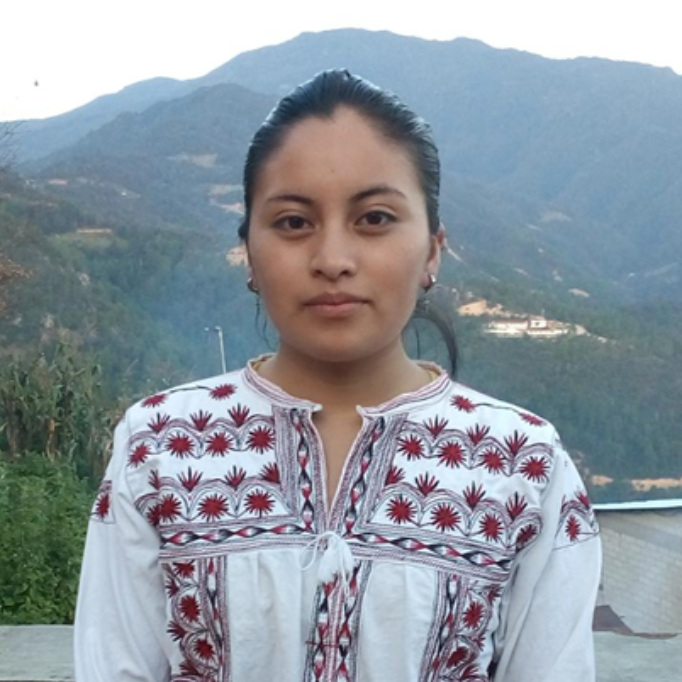 Estrella, 17, is from Santa María Tlahuitoltepec, Oaxaca, Mexico. When she was 2 years-old, she participated at the local Radio Jënpoj and would sing a song she learned in preschool for morning listeners. When she was 9, she learned audio editing with the help of her father. From there, she became interested in learning more about community radio and wanted to become a program editor. By the time she was 15, she had created a radio program with her classmates about issues and events related to their school. She continues to learn and enhance her skills, currently participating in a program series that promotes the rights of Indigenous women.

Her fellowship project entitled “TYIKYËË’NYËM TYIK’Ä’JTSYËM YË N’ÄÄTS YË NKUKOJ” (Taking Care and Feeding Our Roots to Make Them Bloom) aims to strengthen the Ajujk language, worldview, and ancestral knowledge by producing a series of radio programs in Ajujk and Spanish. In addition, she will organize five creative workshops with children and youth focused on their Indigenous language, which also will also be broadcast. 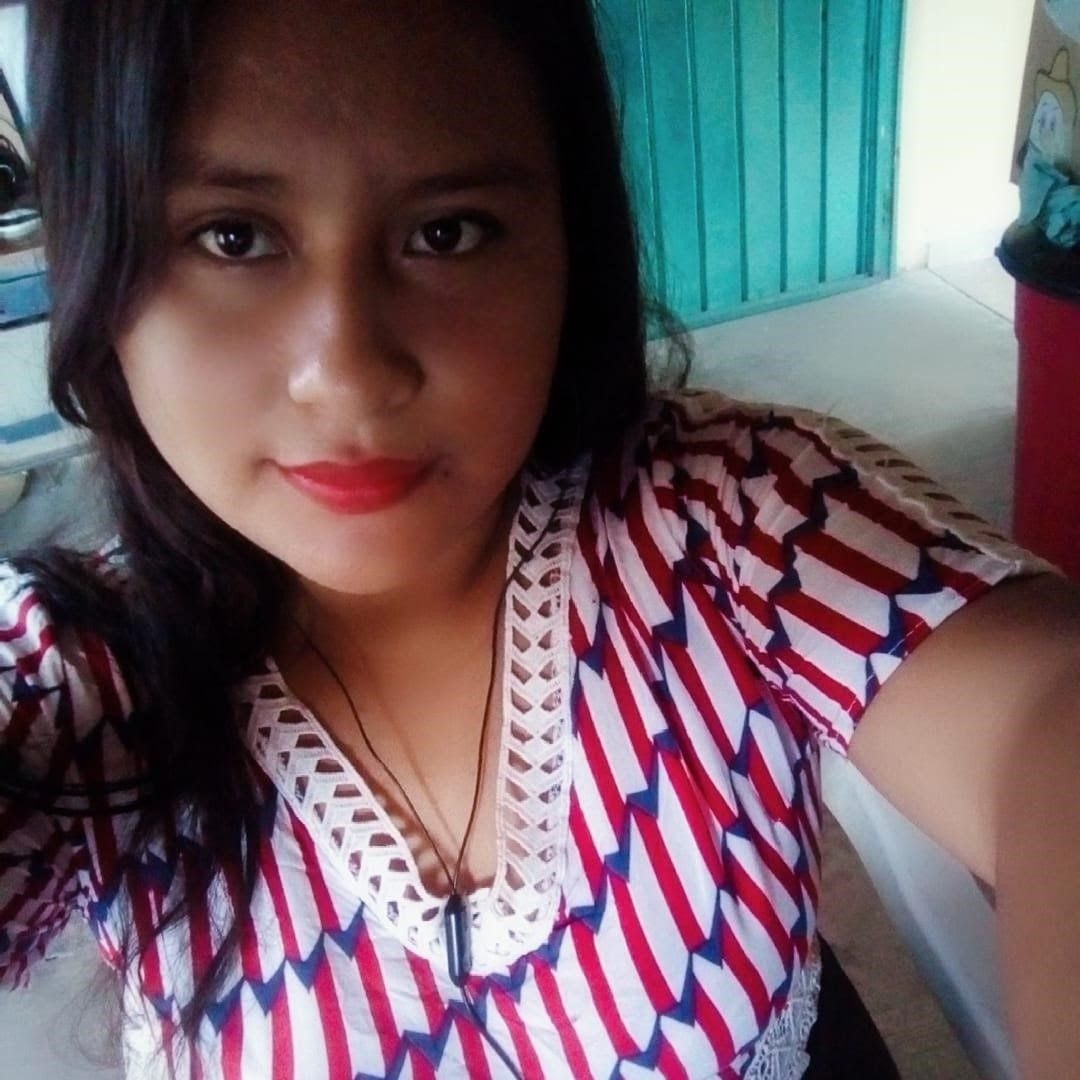 Liliana, 18, is from Santa María Jicaltepec Santiago Pinotepa Nacional, Oaxaca, Mexico. She enjoys traditional music and dance of her ancestors. In 2014, her beloved brother fell deeply ill which forced her to put her studies on hold to support her family. In 2018, she became interested in the Radio Ñu Kaan and started participating, learning about the workings of a community radio station. This opened a door to expressing and voicing her concerns. She attended workshops on gender equality, Indigenous Peoples rights, and community media. She found power in a microphone.

Her fellowship project entitled "Our Women Know How to Organize to Live Well" will highlight the stories of Indigenous women leaders, promoting their abilities and contributions to the community. Liliana will receive training in enhancing her skills in radio production with women from Estero Lluvia, a nearby radio station. She will produce a produce a bilingual radio program about women’s life experiences. Liliana will also organize a women’s community radio gathering for women communicators from different communities and community stations. 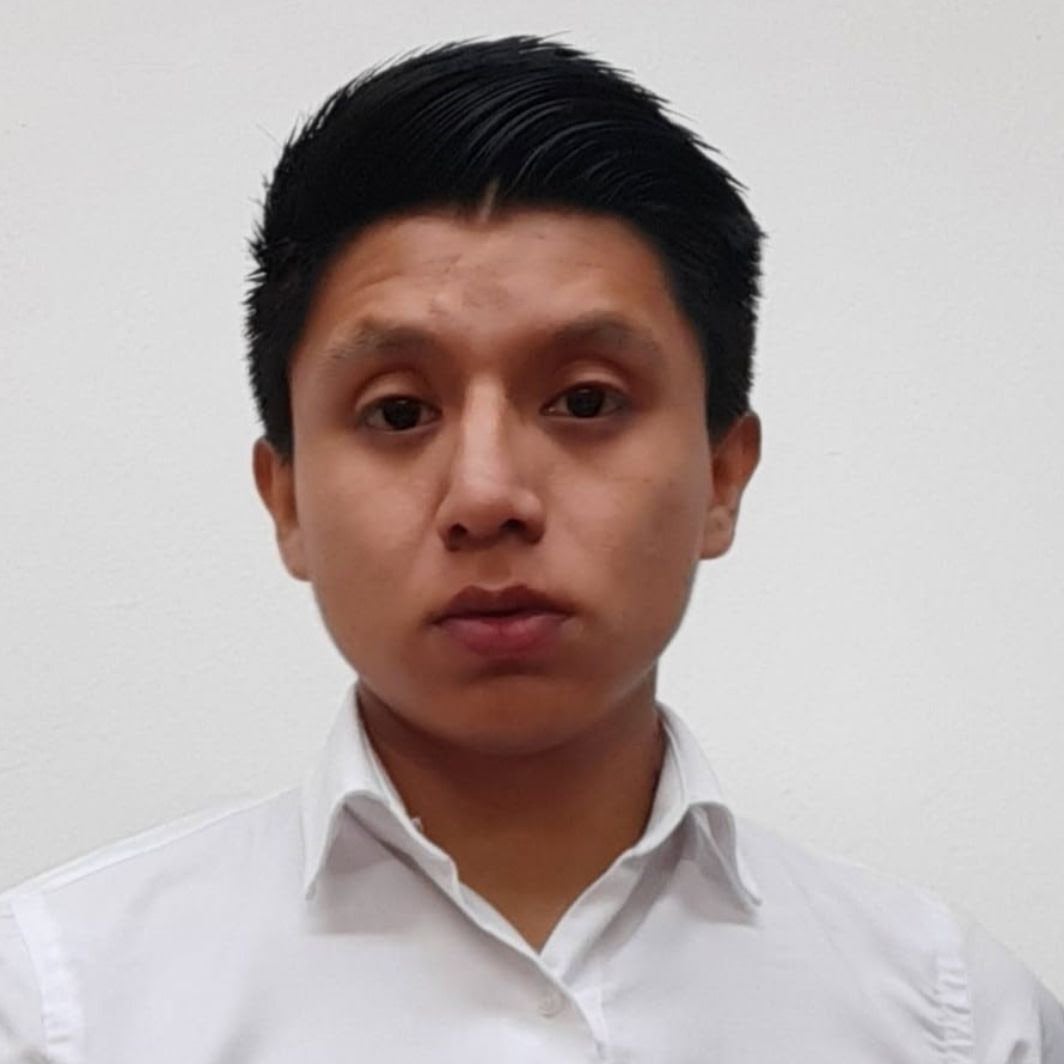 Luis, 25, is from Xochinanacatlan, Puebla, Mexico. He can fluently speak and write in Náhuatl. He studied civil engineering at the University of Puebla with the goal to raise his community out of poverty by developing sustainable structures and systems. He has experience teaching primary school students literacy. With limited resources, Luis produced three videos in Náhuatl without training. After a violent conformation being robbed, he felt the need to share and document this experience, filming people about this issue. From there on, he continued this passion to document struggles and concerns people face, focusing now on the daily life of people in  Xochinanacatlan.

His fellowship project entitled “Creation of Audiovisual Content in Náhuatl” focuses on creating a mobile cinema for revitalizing Náhuatl culture and language that will be transmitted in public centers to motivate people to not forget their culture. In his community, most adults and elders do not speak Spanish fluently, however, the youth do not speak their mother language. There is more of a conversation in Náhuatl between children and grandparents, more so than adults and youth. To address this intergenerational language gap, Luis wants to strengthen their mother tongue by connecting and teaching children and youth the rich Náhuatl language, to close the intergenerational gap. He will organize four workshops on Náhuatl language for children and youth and produce a radio and video series in Náhuatl with Spanish translation. 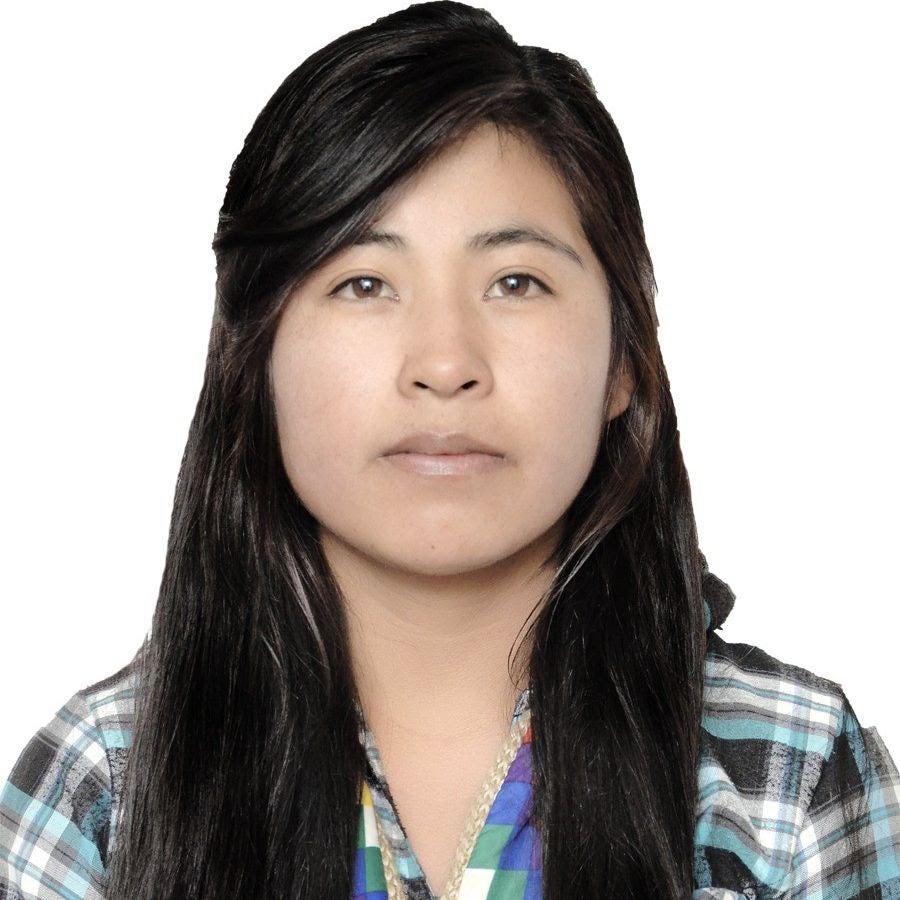 Virginia, 23, is from the Machac Marka community of the province of Yunguyo, Peru. She holds a bachelor's degree in communication. She became an Indigenous communicator due to discrimination that she experienced by living her Aymara culture and speaking her language. At a young age, she learned to defend the rights of Indigenous Peoples. Currently, Virginia is an active member of the organization Union of Aymara Women from Abya Yala (UMA) and National Network of Indigenous Communicators of Peru and Pachamama Radio (REDCIRP-Puno). One of her goals is to travel to the headquarters of the UN High Commissioner for Human Rights (OHCHR) in Geneva, Switzerland, to share her analysis about the Declaration of the Rights of Indigenous Peoples.

Her fellowship project entitled “Workshops for Youth on the ILO Convention 169 on Indigenous and Tribal Peoples in Indigenous Languages” will educate youth in revitalizing and strengthening their rights in Aymara and Quechua. Along with analyzing the articles of ILO Convention 169 for understanding and encouragement of youth participation in spaces where they can exercise and defend their rights. Thirty-five youth will receive these trainings, which will also be broadcast on a local radio station in Puno, to share with a wider audience. 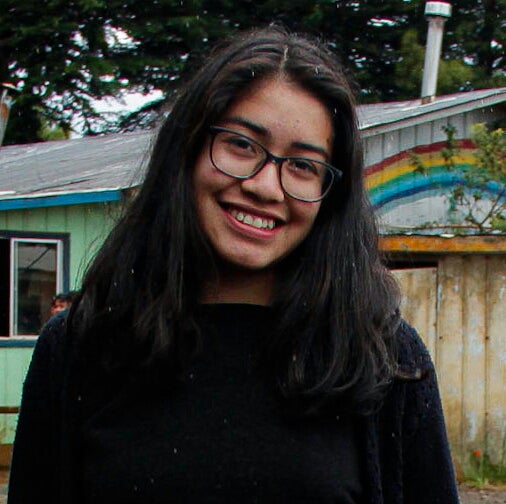 Carolina, 17, is from the Lof Malalhue Chanko community in the province of Cautin. She is part of the "Mapuche School of Film and Communication of Aylla Rewe Budi" established by a group of youth to increase and strengthen communication from the Mapuche Lafkenche perspective. Since 2015, she has participated in many film productions and has received training in photography. Carolina is in her last year of high school where to hopes to continue her studies in filmography.

Her fellowship project entitled “Strengthening Mapuche Communication in the Budi Territory” is about enhancing community media communication and Mapuche knowledge through oral traditions using modern audiovisual technology. She will create and video and radio productions about Mapuche culture and language, local stories, and the knowledge of Ñuke (mothers) and Kuifikece (elders). 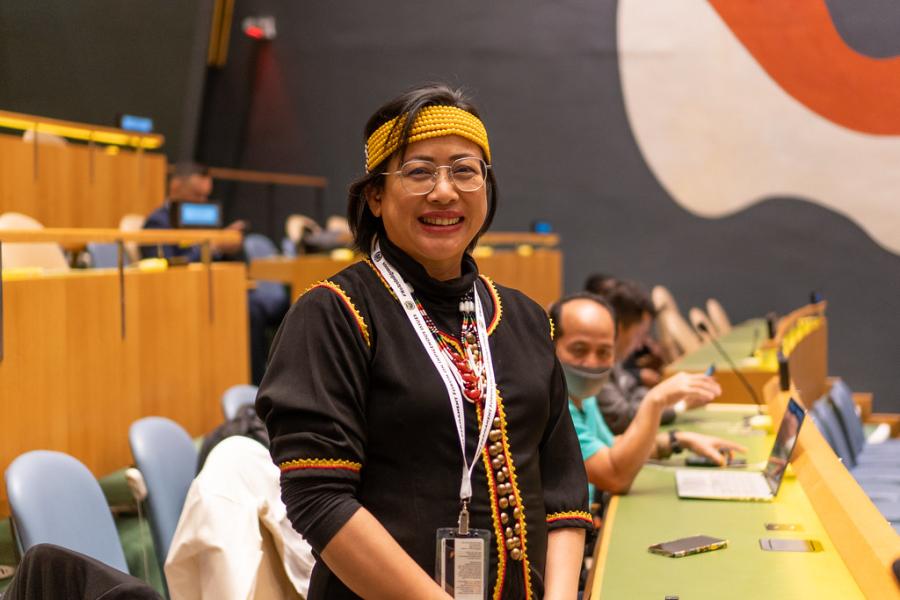 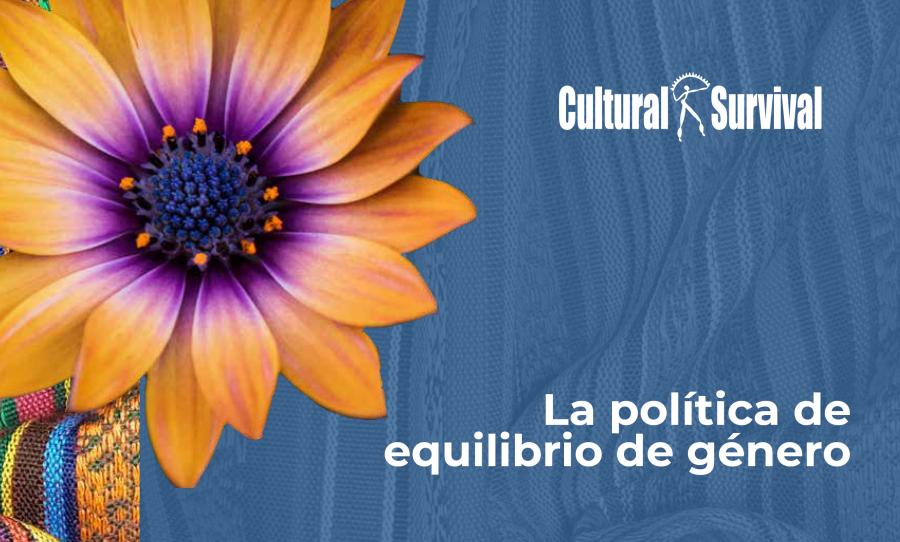