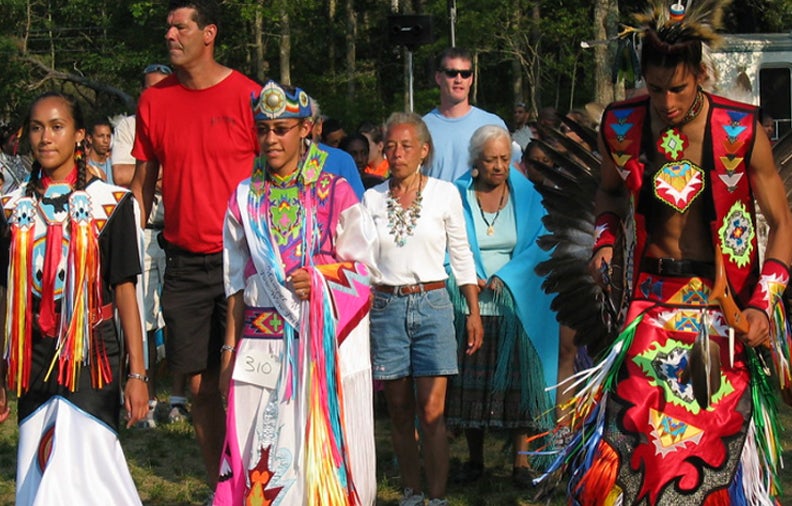 On February 5, 2020, the Mashpee Wampanoag Tribe, the People of the First Light, were forced to continue their fight for sovereignty and land rights, this time in the federal appeals court in Boston. The Mashpee Wampanoag Tribe of Massachusetts have occupied the same region for over 12,000 years and have faced diminishment of their homelands since colonization. The lands of the Mashpee Wampanoag Reservation today represent less than one half of one percent of their original territories. They are the descendants of the Indigenous Peoples who met the Pilgrims when they arrived on the Mayflower 400 years ago. For 400 years, the Tribe has fought for their survival, their lands, and resources.

In 2007 after a decades long legal process, the Mashpee Wampanoag Tribe was finally federally recognized, however they are the only federally recognized Tribe in New England that does not have any statute that establishes protection for their land. International standards recognize that the Mashpee Wampanoag have a right to their ancestral homelands, according to the the UN Declaration on the Rights of Indigenous Peoples, endorsed by the US in 2010.

In 2015, the Department of Interior under the Obama administration approved the Tribe’s decision to put 321 acres of land in trust. 150 acres of this land is in the town of Mashpee, Massachusetts, and another 170 acres is in the neighboring city of Taunton. In 2016, David and Michelle Littlefield, along with other Taunton residents, sued the Department of Interior for putting the Tribal land into trust on the grounds that the Mashpee Wampanoag did not qualify as an Indian Tribe according to the 1934 Indian Reorganization Act. The Indian Reorganization Act was passed in a response to the failures of the General Allotment Act, which contributed to the terrible living conditions on Indian reservations and erosion of tribal land. The 1934 Act allowed federally recognized tribes to place land into trust.

The Tribe planned to build a casino on trust land in Taunton. A federal judge ruled in favor of the Littlefields, which in turn led to the Department of Interior, under the Trump administration, to take the land out of trust in 2018. This would mark the first time Native land has been taken out of trust since the “termination era” of the 1940s-1960s in which the US government intentionally attempted to assimilate Native Americans into the mainstream settler colonial culture.

In 2009, in what’s now called the Carcieri decision, the U.S. Supreme Court ruled that a 1934 statute provides no authority for the Secretary of the Interior to take land into trust for the Narragansett Indian Tribe because the statute applies only to tribes that have been grandfathered into federal recognition when that law was enacted.  This sets a dangerous precedent for other Tribes who gained federal recognition after 1934, who will no longer be able to take land into trust.

According to Larry Echo Hawk, former Assistant Secretary of the Interior for Indian Affairs, “the Carcieri decision is contrary to existing congressional policy, and has the potential to subject federally recognized tribes to unequal treatment under federal law”. Bills to correct the 2009 decision, “Carcieri Fix” bills, have passed on the house floor. However, none have moved past the Senate. In May of 2019, President Trump tweeted that the Mashpee Wampanoag Tribe Reservation Reaffirmation Act was a “special interest casino Bill”. The bill would have confirmed the Mashpee Wampanoag Tribe’s reservation is in trust and can not be challenged in court.

In the federal appeals court on February 5, the Mashpee Wampanoag counsel revisited the wording of the 1934 Indian Reorganization Act to point out the ambiguity of its wording in defining which Indian tribes could put land into federal trusts. In particular, the focus was on the words “such” and “now” and the role these words played in the intention of congress in 1934. Littlefield’s counsel argued that there was no ambiguity and that the act was only referring to tribes recognized by the federal government in 1934. The judges requested both sides to submit 28J letters detailing other cases that refer to the terms “such” and “latent ambiguity.” A judgment is expected in a few weeks.

There was a great focus on whether or not the Mashpee Wampanoag Tribe is considered to be an Indian tribe under the 1934 Act, leading to frustrated feelings from Tribal members “I just want justice. We know who we are. No man is going to determine who we are. This all bothers me, but that is the process,” stated Francie Dottin, Wampanoag Tribal Member.  Other Tribal members expressed frustration that the Littlefield case only focuses on the context of the documents and not the lack of merit of the document’s possible narrow scope.

Although the Tribe has been forced to jump through legal hoops and red tape, the Mashpee Wampanoag have a right to their ancestral homelands, as recognized in the UN Declaration on the Rights of Indigenous Peoples. The Declaration also recognizes and affirms the right to self-determination. “The power to acquire lands in trust is an important tool for the United States to effectuate its longstanding policy of fostering tribal-self determination. Congress has worked to foster self-determination for all tribes, and did not intend to limit this essential tool to only one class of tribes,”  explains Larry Echo Hawk, former Assistant Secretary of Indian Affairs on the need for a legislative Carcieri fix.

UN Declaration on the Rights of Indigenous Peoples Article 3 states: “Indigenous Peoples have the right to self-determination. By virtue of that right they freely determine their political status and freely pursue their economic, social and cultural development."

The Tribe is committed to continuing to push for recognition of their sovereignty over their land. “It’s not if, but when” Mashpee Wampanoag Chairman Cedric Crowell said to reporters outside courthouse.

Cultural Survival joins in solidarity with the Mashpee Wampanoag in demanding respect for Tribal land rights and denouncing the continual attacks against their sovereignty.

To take action in support of the Mashpee, visit #StandwithMashpee

On February 27, 2020, the federal appeals court ruled against the Mashpee. According to the  Mashpee Wampanoag Tribe, “The First Circuit Court of Appeals declined to overturn Judge Young's decision in the lower court. The decision has no impact on the Mashpee Wampanoag Tribe’s pending litigation in Washington, D.C., and its land will not be taken out of trust as a result of today's decision. The Tribe will continue this fight and continue its plea that the United States Congress take action – the Tribe will not give up the fight to protect its lands.” This ruling upholds the lower court’s earlier decision, made by Judge Young, that the federal government did not have the authority to take land into trust for the Tribe because the Tribe is not considered ‘Indian’ under the 1934 Indian Reorganization Act. The lower courts, and now the federal appeals court, rejected the Mashpee Wampanoag Tribe’s argument that the Act was ambiguous in its definition of Indian and left room for interpretation. Currently, the Tribe has a separate lawsuit pertaining to the land pending in Washington D.C.. Due to the separate lawsuit, the land will remain in federal trust at this time. The Tribe will continue to fight for their land rights. Mashpee Wampanoag Chairman Cedric Cromwell stated, “There’s no question that this is a grave injustice. We will continue to fight, as our ancestors did, to preserve our land base, our culture and our spiritual connection to our homelands.”