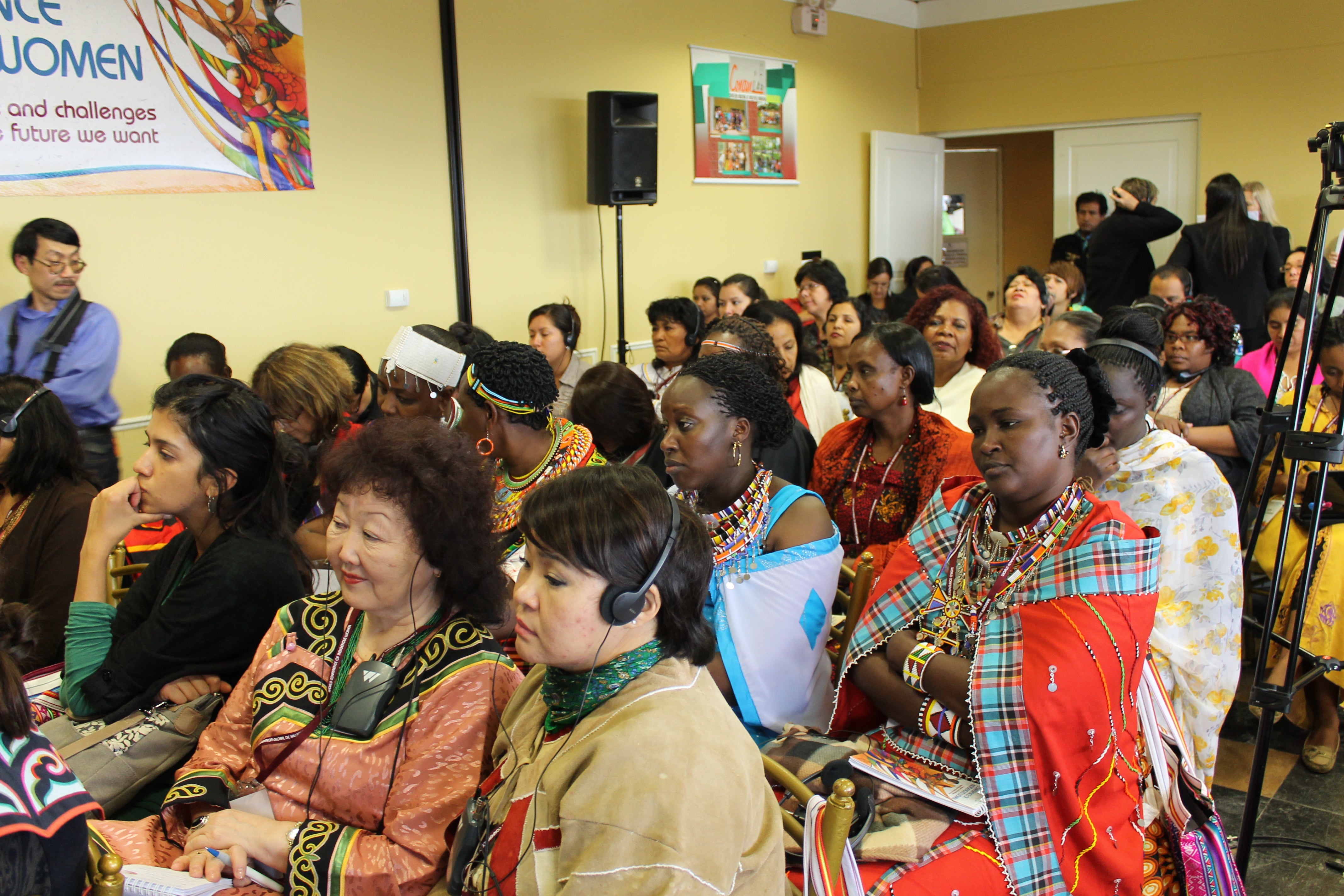 By Jess Cherofsky (CS STAFF) “Food sovereignty is knowing the species we have on our lands, knowing what kind of seeds to plant in each territory,” said Clemencia Herrera from the Colombian Amazon in the working group on food sovereignty and the World Conference of Indigenous Women, which took place in Lima, Peru, October 28-30, 2013. From solidarity markets to schools to educate Indigenous youth about traditional foodways to community organizing to greenhouses in the Arctic and east Africa, there is no shortage of proposed solutions by Indigenous women to address the issue of food sovereignty, or the ability of a people to produce its own food independent of outside markets. As introduced by Indigenous leader Andrea Carmen, food sovereignty is a concept that Indigenous Peoples have developed over the past several years as a key component of their right to control how their lands and territories are used. Carmen cites Article 1 of Common, International Covenants on Civil and Political Rights and on Economic, Social and Cultural Rights as stating, “In no case may a people be deprived of its own means of subsistence.” Yet that is exactly what is happening as governments and companies the world over are snatching Indigenous peoples’ lands without their consent, introducing genetically modified seeds that replace highly adapted heirloom seeds, and forcing dependence on a globalized food economy. Moreover, climate change is altering the environments in which Indigenous peoples live, rendering inhospitable the habitats of the plants and animals on which they depend for food.

Cecilia Brito, president of the Coordinating Association of Indigenous Women of the Amazon, explains how the eating practices of her community have changed. “In the old days, we, Indigenous Peoples, enjoyed unlimited territory for all. There was no hunger or contamination. We had our lands, our forests, our rivers…all with plenty of species.” Her people produced or hunted their own food. Now, she says, they hunt animals, sell them in the market, and use that money to buy food from outside, a cycle that she sees as self-contradictory, especially considering the high levels of malnutrition that she and other women are seeing in their communities. The same is happening in the Arctic. A woman named Linda shares that her people depend heavily on hunting and fishing, but last winter, their caribou herds did not arrive because their migratory routes had changed due to climate change. Thus, men are no longer hunting and women are turning to paid work to provide the funds to buy food, almost all of which is imported. In the Andes, alpaca are no longer arriving to drink the water they always have, so communities are losing their best source of meat and turning to pesticide-ridden imported products. And Clemencia Herrera describes how she has watched the multitude of seeds and plants she knew in her youth diminish in quantity as biodiversity shrinks.

Maria Ponce, a representative of CHIRAPAQ from Peru, clarifies that food security and food sovereignty are not the same thing. People are full, she said, but with potatoes, yucca, and other carbohydrates. Whereas her community used to be able to call the forest their market, they now do not have access to protein and other nutrients absent from carbohydrates. They may be food secure—that is, they have enough food—but it is not the right food.

“Transnational corporations have negative social, economic, and cultural impacts,” Brito said, including the destruction of food sovereignty. Why is this happening? “The State supports a neoliberal policy to which we are not well adapted.” The neoliberal, capitalist project is a theme throughout the presentations of the many Indigenous women present in the food sovereignty working group. It is not, as many defenders of genetically modified organisms (GMOs) and pesticides would have us believe, that Indigenous peoples do not know how to, or cannot, feed themselves. Clelia Rivero, a Quechua woman from Peru, faults free trade agreements with leading to the best domestically produced foods being exported to other countries, leaving lower quality foods for Peruvians themselves. The loss of biodiversity, changing migration patterns, atypical rainfall, and other results of climate change, along with the false lure that pesticides and “improved” seeds pose, are causing traditional foods to be supplanted by imported, less nourishing foods. And as Indigenous peoples stop producing their own food in traditional ways, the spaces in which they usually passed off their ancient knowledge to their children are lost, causing a vicious cycle that results in the loss of traditions developed over thousands of years to care for the Earth and produce from it nutritious foods.

Recommendations for solutions to address these problems are plentiful, although, as many women recognize, it is a long process. Ilaria Cruz, a Guarani woman from Paraguay, proposed establishing agroecological schools to prepare Indigenous youth for the task of maintaining food sovereignty. She said that in her community, Indigenous organizations are saving seeds and have engaged in seed exchanges whereby they share successful seeds and maintain them by continuing to plant them. Alice, a Maasai woman from Kenya, describes how the women in her community have sought assistance from the government in address an inability to access water for growing food. They began planting greens and vegetables at the household level, and when climate change altered rain patterns, they again consulted with the government and now have a greenhouse, in which they can grow food in less time with less water. Despite the challenges, women’s self-determination is allowing them to face the issues and develop solutions. They need to learn to use irrigation systems and how to access markets but, she says, “I am sure we are able to produce a lot.” Cecilia Brito and her community are implementing a project to teach families to produce food at the household level and to bring in a small income. Her organization offers workshops to gather traditional knowledge about native foods and to teach people to produce their own food again based on the wisdom of their ancestors, creating “cooperation between the past and the present.”

Indigenous women are especially important to the fight for food sovereignty. Cecilia Brito explained, “The special role of the Indigenous woman is to maintain the ways of our ancestors. [We fulfill] the important role of preserving our cultures. We produce and reproduce. For the most part, women are in our homes each day with our children, with our family, while the men go out. The woman is the one who most works the earth. As women we hold an important role as protagonists in moving forward.” All of the Indigenous women who spoke emphasized working toward food sovereignty and encouraging their families and communities to do so largely falls to them. Brito’s organization in particular is working to change this paradigm by encouraging couples and their children to produce food for their families together. As Brito puts it, and as the rest of the women agreed, they do this work “to preserve, to continue holding onto that which is ours.”