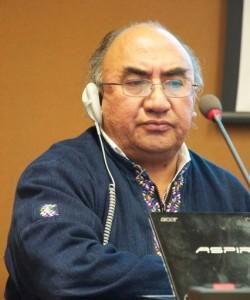 Francisco Cali Tzay, Mayan Kaqchikel from Guatemala, was elected on February 3, 2014 to a two-year term as President of the United Nations Committee on the Elimination of Racial Discrimination (CERD) on the first day of its 84th session. Cali Tzay is the first Indigenous expert to hold such a position in the UN system.

The CERD is the Treaty Monitoring Body for the International Convention on the Elimination of All Forms of Racial Discrimination (ICERD), and one of nine International Human Rights Treaties within the UN system.  The ICERD is legally-binding for the 175 countries (State parties) which have ratified it to date.   The CERD was the first Treaty Monitoring body to be established within the UN System and is responsible for reviewing the compliance of all State parties with the provisions of the ICERD.  It also makes recommendations as to how States should change their policies and practices to comply with their obligations under the ICERD to eliminate racial discrimination in their countries.