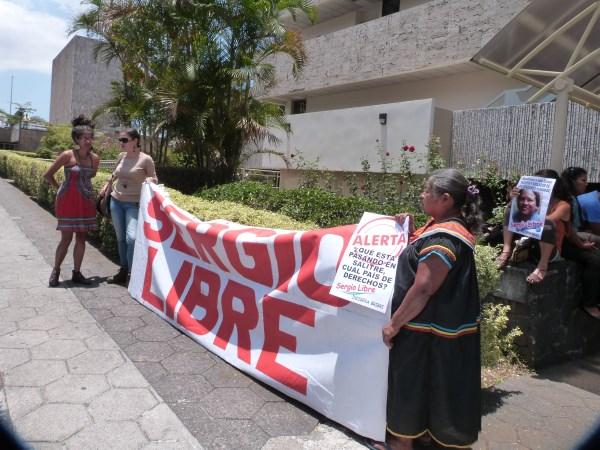 “On August 9, 2010, Indigenous delegates and representatives, sick and tired of waiting for a debate on the Autonomous Development of the Indigenous Peoples Law project, met in the Legislative Assembly in San José to demand a yes or no to that project,” stated the declaration. “Their answer was to remove us with violence, beatings and dragging from the Legislative Assembly, as criminals.”

Indigenous leaders said that they returned to their “peoples and territories to continue with the struggle for autonomy, recovering [their] lands and territories, spirituality, cultures and strengthening [their] own organizations.”

“Throughout these years of exercising our rights we have been shot, macheted, beaten, threatened with death, slandered, offended, imprisoned and denounced,” said the declaration,  “and despite all we have denounced, impunity prevails in all cases.”

The declaration stated that the State of Costa Rica, through its different administrations, has ignored the national and international laws that protect and safeguard the rights of Indigenous Peoples. The declaration comes as the controversy over the take-over of Indigenous lands in the southeastern region of Salitre continues to simmer.

Teribe and Bribri peoples in 2014 took their case to the Inter-American Commission on Human Rights and obtained an order obliging the government of Costa Rica to take precautionary measures to protect Indigenous Peoples against non-Indigenous settlers on Indigenous land. In July 2012, Sergio Rojas, a Bribri community leader, led Bribri and Teribe community members in an effort to reclaim land within the Salitre Indigenous reserve in the Talamanca Mountains in southwestern Costa Rica.

The government at the time said addressing Indigenous people’s complaints was complicated by the fact that various factions exit in Indigenous communities. While the territory belongs to the Bribri people, cases exist of Bribris married to outsiders or to the closely related Cabecar people, complicating ownership rights.

In the August 9 declaration, Indigenous leaders requested a meeting with President Carlos Alvarado to discuss and propose concerns and like the previous rulers, the President ignored requests, and on the International Day of the World’s Indigenous Peoples, the day Indigenous Peoples of Costa Rica were violently evicted from the Legislative Assembly will be commemorated.

“We reaffirm our struggle for our autonomy, land, and freedom. We maintain our slogan of total recovery of Indigenous territories, in the process of autonomous territorial affirmation, which includes land, territory, governance, culture and spirituality. We support the peoples who are recovering their territories and denounce any compensation that is intended to be made to the usurpers of our land.”

--John McPhaul is a Costa Rican-American freelance writer. During his many years in Costa Rica, the land of his birth, he wrote for the Miami Herald, Time Magazine and Costa Rica's The Tico Times among other publications.