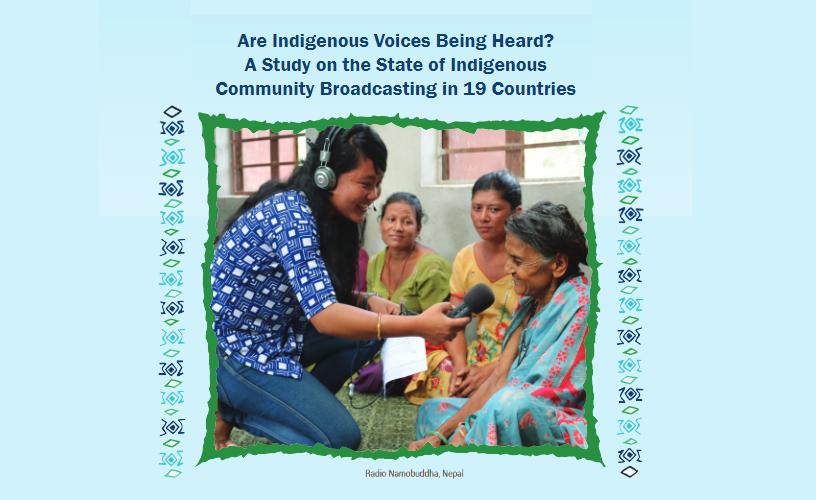 "This study is important because it gives community radios at the local level a resource to compare States' advances towards the democratization of media and the experience of Indigenous radio movements that pushed for those changes," says, Avexnim Cojtí (Maya K'iche'), Cultural Survival Community Media Program Manager.

Indigenous Peoples continue to face obstacles in accessing media for many reasons, including their geographic location, discrimination, costs for operation and access to license, and language and legal barriers. Indigenous Peoples living in isolated areas have little physical access to urban-based centered media. Similarly, a lack of awareness of human rights and the right to access information further contributes to obstacles.

Indigenous-led community radio supports the revitalization and promotion of Indigenous languages, serves as a source of alternative media, builds awareness of Indigenous rights, and promotes Indigenous Peoples’ right to self-determination. In many countries, Indigenous media is threatened by antagonistic attitudes by both government agents and commercial media. Similarly, in many places, mainstream media is only available in dominant languages, making it inaccessible to many Indigenous Peoples and hampering Indigenous Peoples’ rights to access to information in their languages. This issue contributes to the marginalization and loss of Indigenous languages. Indigenous media practitioners and communicators have had to work under threats, intimidation, and regularly experience violence perpetrated by government agents. Many Indigenous journalists live in fear of violence and criminalization simply for exercising their right to freedom of expression, especially when reporting on divisive issues related to environmental protection, land rights, social movements, human rights, and local politics.

This study sheds a light on the status of Indigenous media globally and aims to bring the problems faced by Indigenous community media broadcasts to a larger audience. The study will be the basis of international advocacy at international fora, including the United Nations, for the right to freedom of expression within legal frameworks, as well as for better laws and policies to access community or non-commercial radio frequencies.

“This study is important because it gives added recognition to community radio as the best tool to keep Indigenous cultures, languages, and traditions alive, as well as to inform Indigenous communities about relevant issues and events in their own languages. I hope it becomes a valuable resource for Indigenous rights around the world, especially at a time when Indigenous Peoples’ voices and participation are needed more than ever,” states Philip Lee, General Secretary of WACC.

The study includes individual country reports and equally responds to the need to gather information on the advancements made and obstacles found in complying with the UN Declaration on the Rights of Indigenous Peoples Article 16. The study also points out the main challenges and paths to be followed to promote the growth and consolidation of Indigenous community radio.

The study is available in Spanish and English.

WACC is a non-governmental organization that builds on communication rights in order to promote social justice. WACC offers guidance and support to people of all faiths, ethnicities, and cultures worldwide. They believe that everyone has the right to communicate and to be in communication, in the same way that they have the right to food, shelter, and security. In strategic alliances, WACC aims to be a catalyst for change for the common good, sharing information, knowledge, and experience in the field of communication. WACC has members in 120 countries. www.waccglobal.org