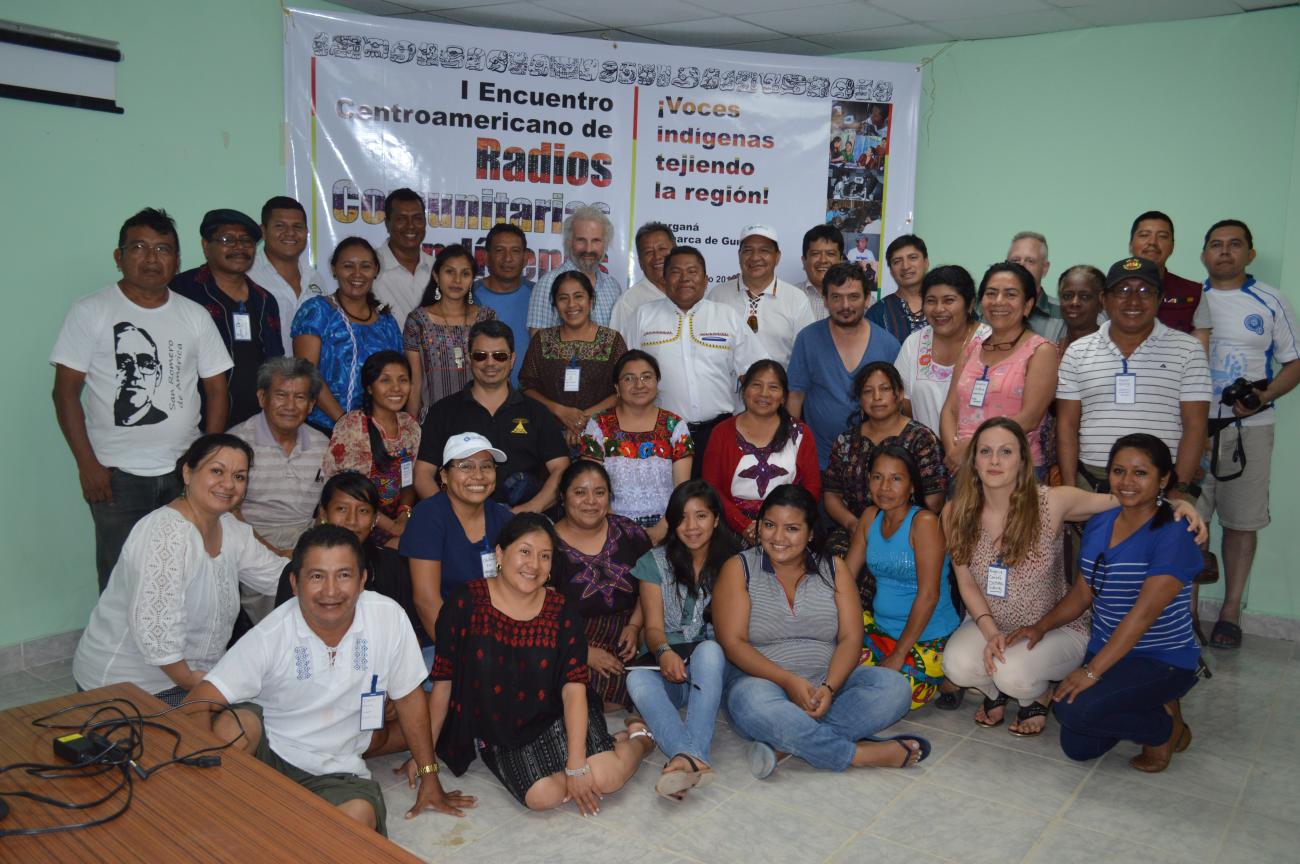 On January 16th and 17th, 2016, Narganá, Comarca Guna Yala, Panama became the birthplace of the Central American Network of Indigenous Community Radios, with more than 40 radio directors from all seven countries in Central America as witnesses. Multiplying efforts to democratize communication in the region, this network will build on and strengthen community radio movements in each country.

Cultural Survival, AMARC Central America, Fundación Comunicándonos, Voces Indígenas and Asociación Sobrevivencia Cultural organized the conference as a response to the growing number of quality Indigenous community radios that are producing and transmitting content in service of their communities in the region. The network weaves together diffuse national efforts to promote Indigenous community communication, creating a strong, unified regional movement. “The radio broadcasting movement in Central America has always dreamed that Indigenous community radios would have their own space so that we would be able to continue pushing and working towards the democratization of communication in the region and continue deepening the fight for our identity and for the rights of Indigenous Peoples,”  exclaimed Oscar Pérez, of AMARC Central America and Fundación Comunicándonos.

For Mark Camp, Deputy Executive Director of Cultural Survival, this first Conference and Network represents a significant new era in the history of Indigenous communication in the region. “This conference has been a long time in the making and we could not be happier with the feedback from radio representatives and with the results of the event,” said Camp. “This network prioritizes the needs of these diverse communities as we move forward to strengthen both the individual radios and the movement as a whole. We have high hopes for what can be done in terms of capacity building, legal reform and quality content creation and distribution as a result of this collaborative effort.”

The conference took place over two days in which participants were given the opportunity to listen to and contribute ideas towards the construction of this alliance. Throughout, spaces were created to reflect on the diverse realities for Indigenous community radios in the region, including stories of persecution and raids by governments who fear the power that community communication provides to communities.

Five core areas framed the discussions of the event: legalization; gender; radio content; economic sustainability; and networks and alliances. These topics were chosen as the themes of discussion groups due to their shared relevance across the region. Working groups debated these topics and presented on their expectations on how the pending network might address each issue. These areas are now the guiding force for the actions taken by the network as it moves forward.

Indigenous Voices Weaving Together the Region

Prior to the Conference, Teresita Orozco, Cultural Survival’s Regional Promoter visited Indigenous community radios in four countries to understand their vision of the network and use their ideas in its construction. Most of the radios visited had a clear commitment to land defense, the preservation of natural resources and working towards women’s empowerment. They expressed high hopes that the network would strengthen their political initiatives and social endeavors as well as provide opportunities to share locally and internationally with other radios. “There is a significant difference between working alone and feeling supported” were words that resonated, visit after visit.

“We need our own spaces as Indigenous Peoples since we are not seeking anything other than the best interests of our communities, which is what distinguishes us from commercial or state radios. We make people think, we support education and growing and we give our communities a voice when nobody else is listening. And this is why they persecute and criminalize us; because we are for the pueblo, not the politicians, and much less for our own interests, commented Olga Ajcalón, of Radio Juventud of Guatemala.

Following reflections and concrete suggestions from participants, the goals of the Central American Network were defined. Rooted in an intercultural, gendered perspective, the network has the specific objective of strengthening identity and Indigenous Rights defense through community radio. This Network is a platform for sharing best practices, political lobbying strategies, and communicational and technical resources; and for demanding national and international actions for new legislations that permit the democratization of communication for Indigenous Peoples. Working with existing national networks and alliances, this network will articulate those efforts to push forward processes that strengthen the capacities of Indigenous Peoples in community media and create regional lobbying strategies to ensure that Indigenous Peoples right to their own media is legally recognized.

The participants agreed on criteria for participation in the network, elucidating that the radios must self identify as community radios; they must be administered by their communities and/or Indigenous organizations; their programming and content must be oriented towards the preservation and defense of identity, culture, language and Indigenous Rights; and they must not be tied to churches or religious tendencies nor to political parties.

Participants expressed their joy at the development of this network and their hopes for what this means for the future of the Indigenous Community Radio movement in the region. “This first Conference has been successful and has contributed to the union of the Indigenous Peoples of Central America being able to work on a common agenda around the right to communication, the broadcasting of free thought and the right to information…We want to be able to transcend borders fighting for the respect of our rights as Indigenous Peoples”, highlighted Salvador Zuñiga of Radio Morazanista in Honduras and members of the new Regional Commission of Indigenous Community Radios.

Carolina Morales, Executive Director of Radio Ixmukane in Guatemala emphasized the faith she has in this network to put an end to the political persecution that hers and other radios have been submitted to. “I hold great hopes and excitement for a better region; more solid and united. I believe that this network is what we need to come together and push ourselves forward in solidarity with one another”, Morales affirmed.

Roelio Fuentes, legal representative of Asociación Mujb' ab'l yol and Radio San José in Guatemala highlighted that for him “it was a surprise to learn that in Central America we are all aspiring to the same goal: the legalization and self-sustainability of community radio. I thought only three countries were in this fight. The lived experiences are diverse but similar and this is why we put our hopes into the Central American Network of Indigenous Community Radios with a multicultural and gendered focus, which will be able to guide us towards the recognition of our communities in defense of our rights, highlighted Fuentes, who commented that he hopes the network will be able to make some waves and influence the Central American Parliament to push for legalization of community media.

In order to operationalize participants’ hopes and ideas, participants from each country elected representatives to form the Regional Commission of Indigenous Community Radios.  This Regional Commission then developed a document outlining the focus and goals of the network and addressed the press in Panama City at a press conference the followed the event. They are now commencing the process of planning next steps for the network as well as a follow up conference.