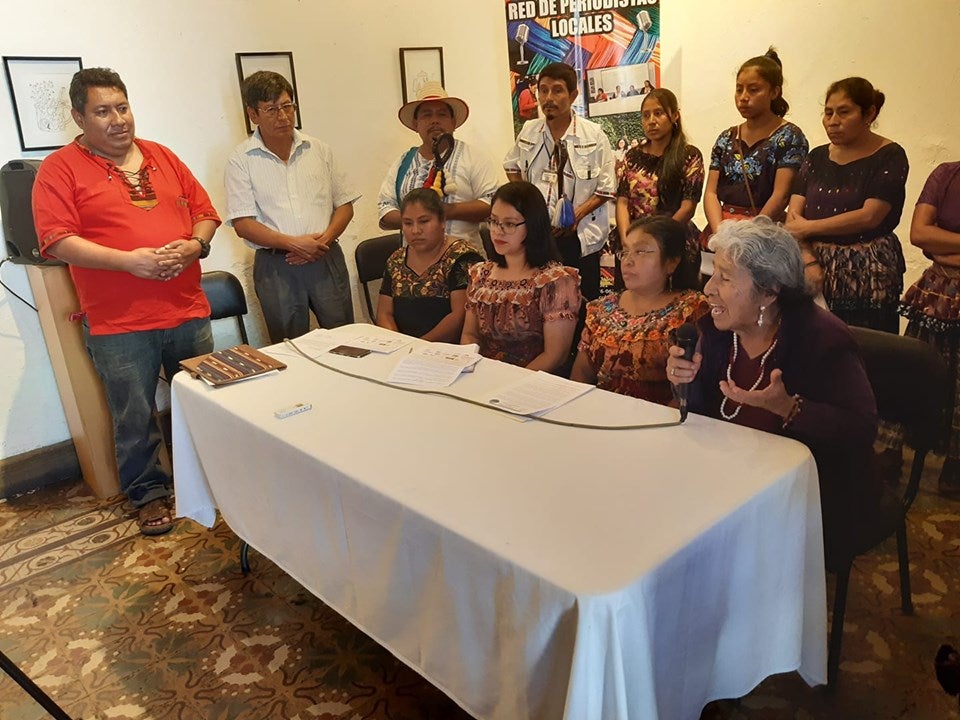 Several organizations in Guatemala have condemned the anti-democratic policies of President Jimmy Morales after the Public Prosecutor’s Office raided community radio station Radio Xyaab ’Tzuultaq’a, of El Estor, Izabal on September 26, 2019. The region of El Estor was under a “State of Siege” (martial law) for a month starting on September 4.  The State of Siege was lifted October 7th after Morales’ bid to renew it for another 30 days failed to pass in Guatemala’s congress.

The Rapporteur for Freedom of Expression at the The Inter-American Commission on Human Rights, Edison Lanza, posted on Twitter on September 26, “In Guatemala a State of Siege has been declared to address organized crime and being used to persecute and close yet another community radio station belonging to the Mayan Peoples.  We will be following this attack on freedom of expression.”

Guatemala’s Human Rights Ombudsman stressed that they will open a file to verify if the actions of the authorities to obtain a search warrant on Radio Xyaab ’Tzuultaq’a are legally admissible.

For the community radio movement in Guatemala, this persecution is a clear violation of the right to freedom of expression. It is unconscionable that the government take advantage of the  state of siege to raid a community radio. Congress has stalled the passage of Bill 4087 for the Legalization of Community Media, which seeks to democratize the radio spectrum and legalize operation of community radio stations in the country.

“Where are Robín and Raúl?”  The agents of the National Civil Police inquired when entering the facilities of the station, referring to the administrators of the radio station, said Arnoldo Tzub, employee of the Estoreña Association for Integral Development (AEPDI), who witnessed the search. Not finding their whereabouts, the agents chose to confiscate documents such as their community journalist identification cards.

“The search lasted more than two hours... approximately 20 police officers were inside the facility and several vehicles with other officials including the Army outside. ‘You can't leave here until we're done,’ they told me… Not finding anything in the station, they entered the AEPDI office, looked up all the information related to the radio. They searched the desks and files, they took information from the computer and they took photos from personal files of the legal representative and the administrator,” Tzub added.

“No one was arrested,” said Robín Sicajan, administrator of the AEPDI organization, “but there is total condemnation for this action and solidarity among community leaders, but they know that nothing can be done now during the state of siege.” Sicajan emphasized, “the support of organizations has strengthened us, but we fear that the harassment will continue against AEPDI due to our advocacy work with communities fighting for the protection of their territories and due to the demands they have made to definitively close the CGN-PRONICO mining company.”

According to Sicajan, the raid is related to the community’s opposition to the mining project.  “The mining company has attacked the fishermen's association for denouncing the pollution of Lake Izabal and we, AEPDI, have also denounced it. It’s possible that this raid is a continuation of that, conducted to disorganize us.”

The state of siege in 22 municipalities and 6 departments included in the Estor-Izabal was implemented by President Jimmy Morales, in the face of the murder of 3 members of the army, by alleged drug traffickers, a measure that has not identified those responsible for the incident. Meanwhile, the rights of the villagers, including freedom of expression, have been violated.

The raid of Radio Xyaab ’Tzuultaq'a demonstrates the repressive face of the State of Guatemala, showcasing that there are no guarantees to exercise of Freedom of Expression. The press conference organizers are calling on the international community to be vigilant of what is happening in Estor, Izabal, and are demanding that the Public Prosecutor's Office comply with the recommendations of the rapporteurs of freedom of expression of the United Nations and the Organization of American States, that Congress approve Community Media Bill 4087, and that the Superintendence of Telecommunications equitably distributes radio frequencies to commercial, state, and community radio stations.

AEPDI reiterates, “State harassment and disinformation campaigns will not stop institutional work in defense of human rights. We will continue to denounce the violations of the rights of Indigenous Peoples by those who use and dispossess Indigenous communities of natural resources for mining, oil, hydroelectric and monoculture extraction of palm, cane, rubber among others.”