Indigenous Authorities in Guatemala Call Out Government for Lack of Access to Education, Justice, and Health 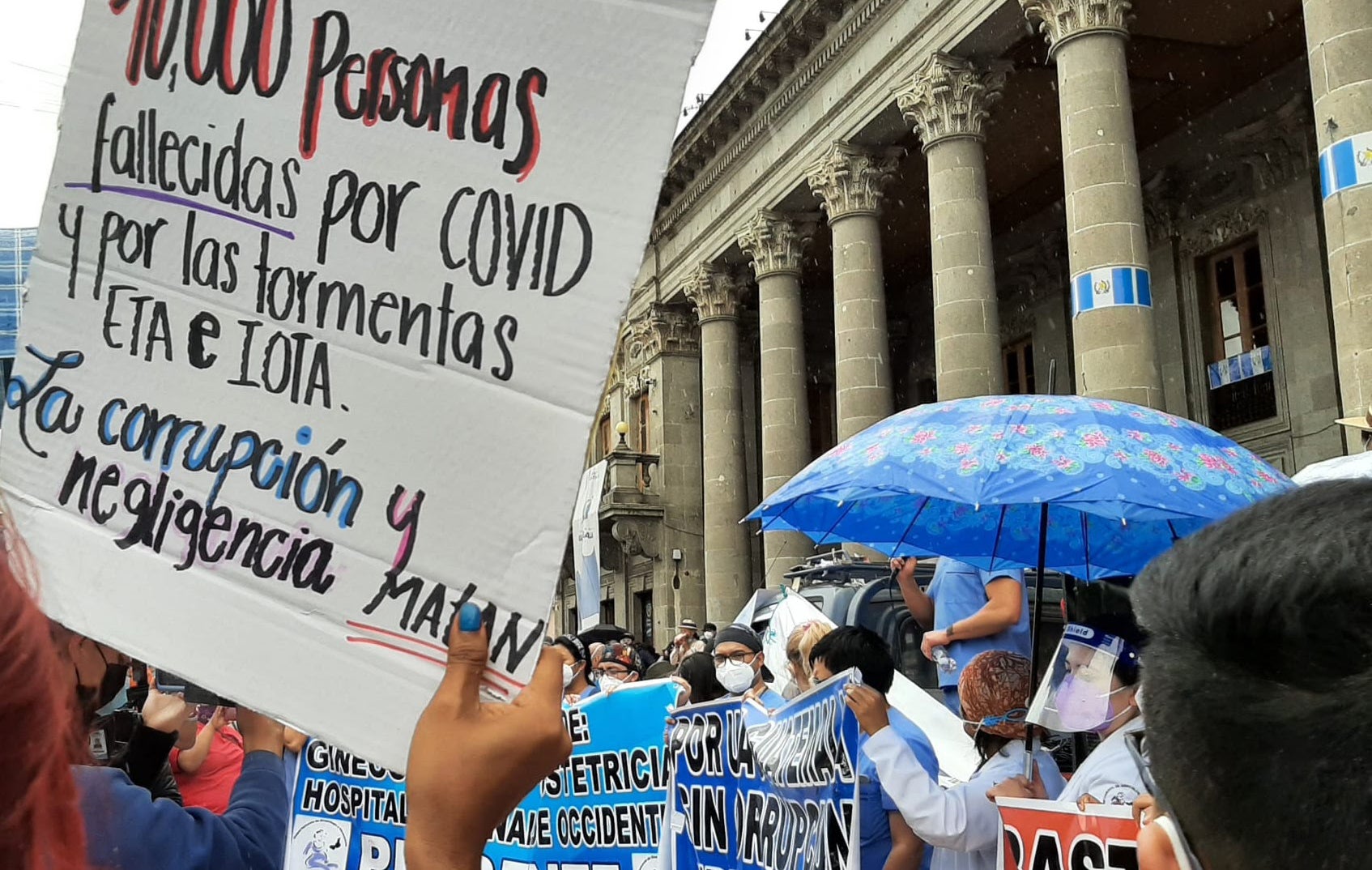 Indigenous Ancestral Authorities, civil society organizations, and a large portion of the general public have been expressing their dissatisfaction with the President of Guatemala, Alejandro Giammatei, and the head of the Public Ministry, Consuelo Porras. This discontent has been generated by the ungovernability, corruption, and the July 23 dismissal of Juan Francisco Sandoval, who was in charge of the Special Prosecutor Office Against Corruption (FECI), for investigating acts of corruption by senior officials.

At a press conference, the 48 cantons of Totonicapán spoke out against the removal of prosecutor Sandoval, calling on the population to paralyze the country from July 29, 2021. "What overflowed the glass is the dismissal of the FECI prosecutor, (...) a person who was at the forefront of taking proceedings against corruption and through his dismissal we are left with the entire justice system breaking down,"  said Aleizer Arana, Ancestral Authority of the Xinca Peoples.

"Unfortunately we have a failed State, a State that does not represent us," said Ana María Top, from the Association of the Integral Group of Women from San Juan (AGIMS), who was at kilometer 28 of the highway to San Lucas Sacatepéquez, next to the organizations Waqib 'Keej and the Social and Popular Assembly, on July 29. According to Top, "They [the government] make laws for their benefit, that is why we Indigenous Peoples go out to raise our voices, we are covering the streets, demanding justice as our grandparents have taught us."

Top adds, “even though they tell us that we have nothing to do (…) although many times they tell us that there is someone who pays us, we are doing this; paralyzing the streets, (…) because of this failed state. The entire country knows that we do not have access to health care, in health centers there is no medicine. Where is the money approved in Congress through loans to mitigate the pandemic?”

"This political and economic crisis is not from now, it has been ongoing forever," emphasized Rolando López Crisóstomo, member of the Mam Council of the department of San Marcos. “The only way to save the incipient democracy is through the resignation of Giammatei and Consuelo Porras, who do not represent the population but rather the corrupt pact.”

López stated that the government is not responding to the demands of the people, “It is not possible that the education sector has a minimum budget.” The pandemic has made education move online. “However, people do not have the technology and do not know how to use it," emphasizes the Xinca authority, adding that, "the family bonus promised by the government did not reach everyone. In my case, I received it, but… later I received a receipt for 350 quetzales for the electricity bill; usually, I pay between 90 to 110 quetzals a month."

Thousands of residents joined the call of the ancestral authorities, peacefully blocking the main roads of the departments of Alta Verapaz, Sololá, Huehuetenango, Escuintla, Chiquimula, Suchitepéquez, the capital city, among others, which lasted for several days. They displayed banners and shouted: "Giammatei resign! " and "Consuelo Porras resign!"

The Coordinating Committee of Agricultural, Commercial, Industrial, and Financial Associations (CACIF), in a statement dated August 9, 2021, demanded that the government, "in accordance with the amparos filed and as ordered by the Constitutional Court, proceed to expedite the ways and citizen guarantees are respected. Likewise, it is necessary to investigate who is behind these mobilizations and what is the origin of their financing.”


Days later, exporters also spoke out, pointing out losses of more than 270 million quetzals a day due to the blockades, highlighting the economic reactivation of the country. "To some, it does not seem that we are protesting. They tell us that we are blocking development, however, the real blockages come from the State, which has blocked education, justice, health from us for 200 years," highlighted Aleizer Arana.


On August 13, 2021, the Indigenous representatives delivered a memorandum at the presidential palace in which they requested the immediate resignation of the President due to his poor management, which has generated the weakening of public institutions and the increase in corruption. “He no longer represents national unity, he only represents the dispossession, exclusion and misery of the majority of the population and since he is not above the rights of citizens and the laws, he must resign,” stated the memo. They also traveled to the central offices of the Public Ministry, making the same request to Consuelo Porras, Attorney General of the Public Ministry, questioned for protecting officials involved in acts of corruption and interfering with criminal investigations. 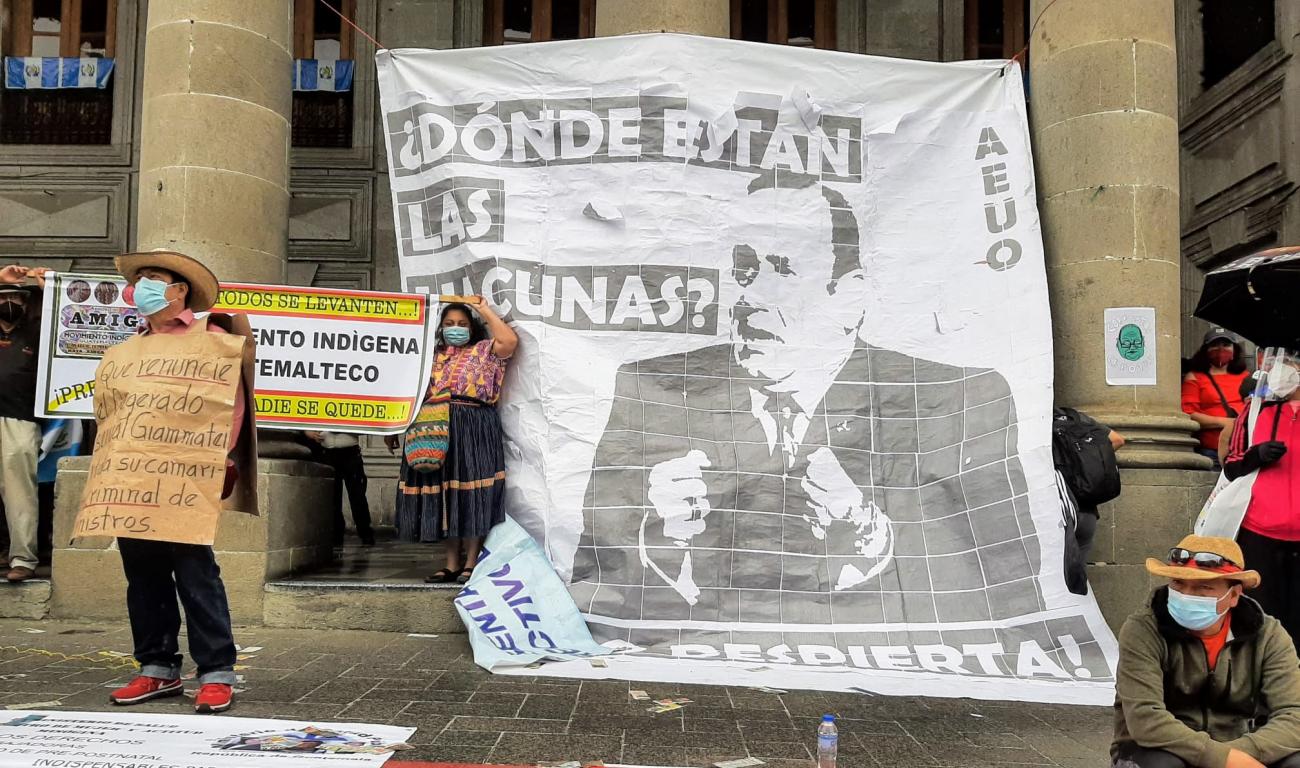 “Last year millionaire loans were approved for the purchase of vaccines; however, we are one of the most backward countries in the administration of vaccines,” stated the Xinca authority. “The government has not invested any of the loans,” says María Top, “they are only taking advantage of the pandemic to enrich themselves. They are not paying the doctors, the nurses, there are no supplies in the hospitals. The vaccines that are being administered are from donations.” The ancestral authorities blame Giammatei for the mismanagement of the COVID-19 pandemic. Thousands of people have died, hospitals are short of supplies; the medical staff is insufficient and the Russian vaccines have not arrived yet. “There is no registry that tracks the linguistic community and Indigenous population that has been affected. Nor are there details of the number of deaths, how many have been vaccinated, and how many have overcome COVID-19 tracked. On the other hand, the State has not created information on the pandemic in Indigenous languages, much less has it provided guidance on ‘the importance of getting vaccinated,” explains Top.

At a press conference on April 5, 2021, President Alejandro Giammatei announced the purchase of 16 million doses of the Sputnik V vaccine from Russia for the price of 160 million dollars, advancing 50 percent of the cost. On July 23, 2021, the Congress of the Republic reported on its website the progress in vaccination. In the first phase, the health agencies focused on reducing the mortality of medical personnel, nurses, firefighters, personnel who work in institutions, and funeral home workers. Next, people over 65 years of age and security agents were vaccinated, leaving the vaccination of people over 18 years old at the end.

The Law for the Financing and Acquisition of Vaccines against COVID-19, Decree 1-2021, obliged the Ministry of Health to create the National Vaccination Plan against COVID-19, establishing the Personal Identification Document (DPI) as the only requirement for qualify for immunization. On its Twitter account, the Ministry of Health announced on September 20, 2021, that 6,148,726 vaccines had been administered, of which 2,031,786 were second doses. According to the National Institute of Statistics (INE), the population of Guatemala exceeds 14 million inhabitants, according to the latest census. That is only 14 percent of the population being fully vaccinated.

“On September 8, 2021, without an adequate response from the President and almost a month after the beginning of the peaceful demonstrations, the 48 cantons, the Xinca Peoples, the Palin Indigenous Mayor's Office, among other organizations filed a criminal complaint against President Alejandro Giammatei in the Public Ministry, holding him responsible for the mismanagement of the COVID-19 pandemic. In addition, he is accused of discrimination and the possible anomalous purchase of Russian vaccines, among other irregularities,” Martin Toc of the 48 cantons and representative of the towns pointed out. “As long as the State does not respond to the demands of the population, the authorities will continue to call for the defense of human rights, collective rights, and governance. The authorities call on the population to take all health precautions because we must be healthy to continue fighting for our rights," concludes Aleizer Arana.