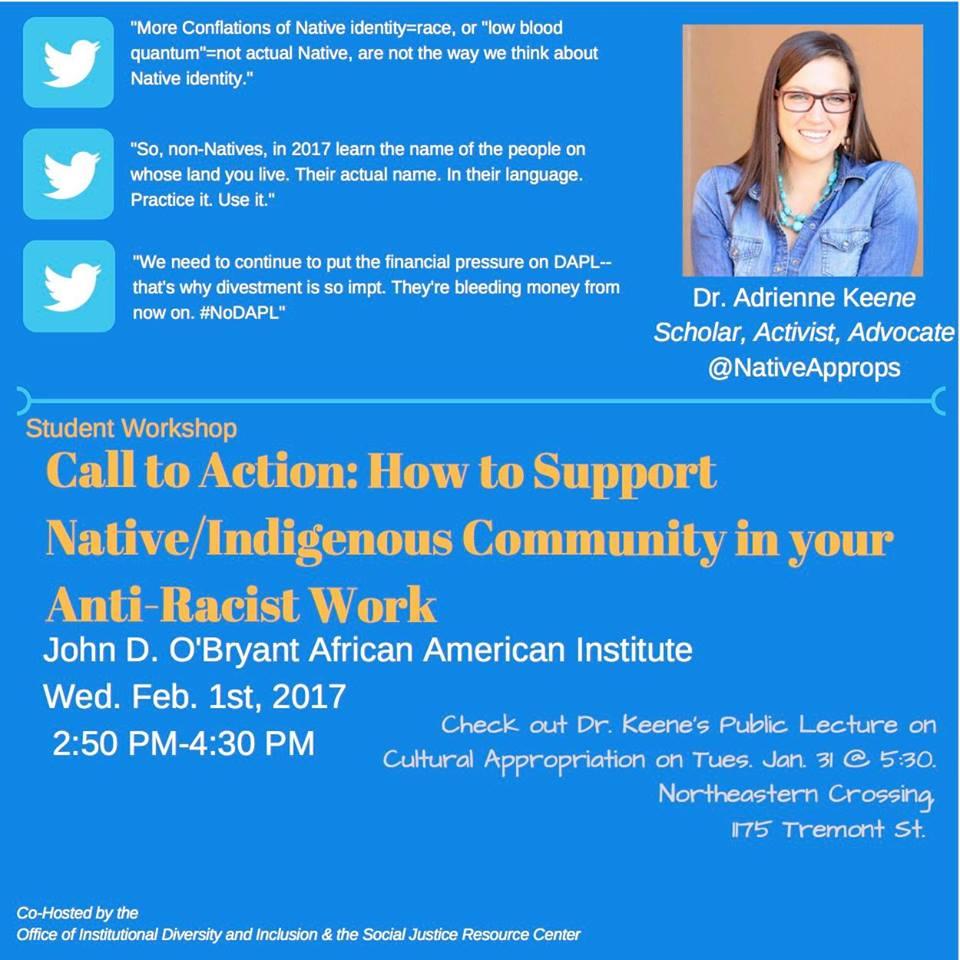 Dr. Adrienne Keene (Cherokee Nation), scholar, activist, writer, blogger at Native Appropriations, and currently professor at Brown University, led a workshop at Northeastern University in Boston on Feb. 1, 2017, entitled, “How to Support Native and Indigenous Communities in your Anti-Racist Work.”

Prior to breakout group discussions of real-life sample situations and action plans, Dr. Keene discussed some basic ideas on how Indigenous Peoples tend to be excluded.

Dr. Keene shared a quote by James Baldwin to frame the conversation: “If I love you I must make you conscious of the things you do not see.” She went on to talk about some of the ways in which the anti-Trump movement has invisibilized Indigenous Peoples and their history and current existence. The “we are all immigrants” rhetoric “erases not only Indigenous presence but slaves who were brought here against their will,” Dr. Keene said.

Referencing the common refrain at protests and on social media that “this is not America,” a statement many anti-Trump protestors have been using to denounce sexist, racist, homophobic, and other violent rhetoric and policies that the new administration has put forward, Dr. Keene said, “To me, as a Native person who knows what my ancestors have been through…the other immigration bans we’ve had from the Chinese Exclusion Act [of 1882] on down, to me, saying 'this not America' is erasing that history that this has been America.”

The question we must center in our work, Dr. Keene emphasized, is “Whose land are you on?”

“Everywhere you are in the United States, you are on Indigenous homelands.” That does not mean not fighting for immigrants and for justice; what it means is that it is essential to recognize that any battle, rhetorical or otherwise, that takes place on US land is taking place on Indigenous lands.

She proposed a popular rallying cry, “No ban on stolen lands,” as a more intersectional way of arguing against racist immigration restrictions. This statement both acknowledges Indigenous Peoples and the violence the US has subjected them to and the importance of welcoming new immigrants regardless of race or religion.

The second part of the workshop focused on how to support Native students as an accomplice or an ally and encouraged participants to seek out our own points of resistance (e.g., areas where we might struggle to understand why something is problematic or feel defensive about our actions) and areas where we need support and growth. The examples posed were relevant to many contexts, not just a university campus.

After discussing the sample situations in small groups, attendees had the chance to share the strategies they had come up with and questions they had had. The group discussed initial reactions to the racist situation, additional information needed, sources of possible support for action, and a critical consideration of what the desired outcome was.