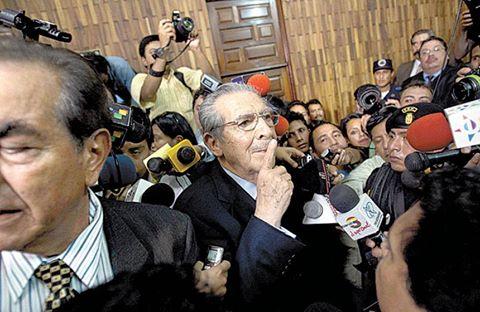 On Monday, May 20, just ten days after the historic conviction of ex-dictator José Efraín Ríos Montt to 80 years in prison for genocide and crimes against humanity, the Constitutional Court of Guatemala has thrown out the ruling.

On May 10, Montt was sentenced to 80 years in prison for overseeing the murders of at least 1,771 Maya Ixil during his time as dictator from 1982 to 1983. This ruling was an immense victory for Indigenous peoples of Guatemala, who had yet to see any justice for the rapes and murders of family members, the massacres, and the destruction of their homes and their lands that occurred during the 36 year armed conflict in Guatemala. This decision by the Constitutional Court is a shock and a travesty to Indigenous communities and human rights activists alike. For many, the ruling against Montt was a sign that injustice against Indigenous communities would no longer be tolerated, and that justice, even against the highest powers, could be sought.

However, yesterday the Constitutional Court has decided to throw out all proceedings that occurred since the April 19 due to appeal issues that occurred on this date. This decision comes after much pressure to overturn the verdict from CACIF (el Comité Coordinador de Asociaciones Agrícolas, Comerciales, Industriales y Financieras), a very powerful business group in Guatemala. Since the verdict was made on May 10, this group has been campaigning for the decision to be redacted, and only ten days later, their demands have been fulfilled.

This decision means that Rios Montt will no longer be detained, but instead placed under house arrest, as he was during the duration of his first trial. The new trial, when it commences, will likely take place under a new tribunal and all of the testimonies that occurred up until the April 19 will remain valid evidence.

This move reiterates the grave political landscape in Guatemala at this time and the terrible inequality that Indigenous communities continue to face. The Indigenous populations who have experienced unnamable injustices and atrocities have yet to see the justice that they deserve. They continue to fight, but it appears as though the rich and powerful of the country continue to remain above the law.