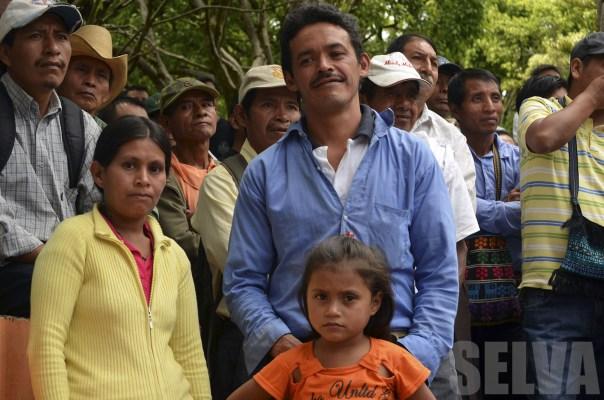 Saul Mendez with his family at a peaceful demonstration in Barillas in 2013.

Two Q’anjobal Maya community leaders who were imprisoned in Guatemala for the past two years, have finally been declared innocent and released. A regional criminal court in Guatemala found the two men to be absolved of all charges on October 28, 2015.

Rogelio Velasquez and Saul Mendez had been unfairly imprisoned as a result of their activism organizing against a Spanish hydroelectric dam project in their town of Santa Cruz Barillas, Huehuetenango.  The two men have had a long trajectory as community leaders, participating in the organization and promotion of a community consultation in 2007 and again in 2011, in which members of the Indigenous Q’anjobal Maya community voted overwhelmingly to reject any outside companies from conducting resource exploration or extraction.  The Spanish company has ignored these demonstrations; rather than respecting the autonomy of the community, have pushed violently and aggressively forward with their plans for a dam on the sacred Qam Balam river. Velasquez’ and Mendez’ villages were the first to rise up against the dam, as they were the most likely to be affected by the project.

This is the second stint that the men have done in prison. In May 2012, they were arbitrarily detained in Barillas after protesting outside of military headquarters after the assassination of their neighbor and fellow community leader Andres Francisco Miguel. Along with along with seven other men, they were illegally held in prison for 8 months, until finally being released in January 2013 after no charges were brought against them.   In November 2012, the UN Working Group on Arbitrary Detention emitted a statement 46/2012 confirming that these arrests were arbitrary.

Then, eight months later, two men dressed as police officers- but lacking any police identification- detained the Velasquez and Mendez and put them back in prison. Later charges were filed accusing the men of having “participated’’ in a public lynching that occurred three years earlier in 2010.   Mendez and Velasquez have maintained their innocence.

In an interview the day before their trial on the 28th, Prensa Comunitaria reported that after two years, 2 months and one day in prison, the men remained as lively as ever. “We kept a promise to the town of Barillas and its people. We are in prison for defending what belongs to the community and that’s why we know that the people will support us,’’ they said.  The men have lived in constant worry about their wives and children, the harvesting of their corn fields, and whether their families have had food to put on the table. They were forced to learn how to find hope even at the darkest of moments; Rogelio Velasquez has dedicated his time to learning to read and write. Saul Mendez has been weaving, creating sachels and bracelets decorated with the word “Libertad’’.

Arbitrary detention and the criminalization of human rights defenders has become a rampant epidemic in Guatemala, especially against Indigenous leaders.

The UN Office of the High Commissioner summary of stakeholder submissions to the Human Rights Council Working Group, during the Universal Periodic Review of Guatemala in 2012 noted,

“HRDs [Human Rights Defenders] continue to face death threats, physical attacks, killings and other forms of violence, mostly carried out by clandestine security organizations and illegal groups… The illegitimate use of criminal proceedings against HRDs  prevented them from carrying out their legitimate activities…   The worsening situation of human rights defenders was directly related to the failure to address land conflicts and the repressive policy pursued against indigenous communities who object to the use of their natural resources without prior consultation.”

The threats to the safety of Indigenous human rights defenders are growing, and it is left to be seen how Guatemala’s new president-elect Jimmy Morales’ administration will affect change.  But for now, at least two more men have been able to return home to their families.