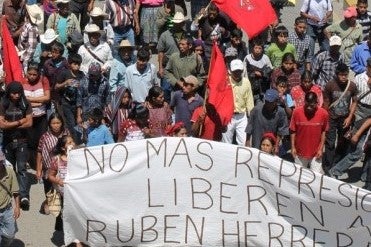 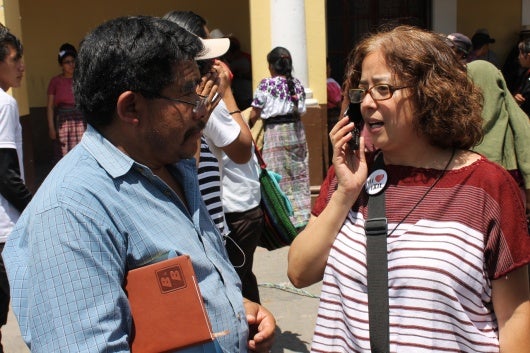 In April 2015, Cecilia Mérida, the partner of an environmental defender who was arrested and falsely charged and imprisoned in Guatemala testified at the World Bank in Washington, D.C.  She spoke of the damage being inflicted by the Bank's financing of the Cambalam hydroelectric dam in the municipality of Barillas, Huehuetenango. She testified to the strategies of criminalization being employed by the Guatemalan government and the dam's Spanish owner - Hidro Santa Cruz - in an attempt to silence local opposition. She spoke first hand about the impacts on families and communities when leaders are illegally detained and imprisoned for months, or even years on end.

The World Bank continues to be a major funder of resource extraction companies around the world, loaning hundreds of millions of dollars each year to companies working in the global South who are unable to guarantee that these investments are not contributing to human rights violations. The tragic situation in Santa Cruz Barillas is an example of this systemic problem: the Inter-American Infrastructure Finance Corporation (CIFI), a US-based private sector lender funded in part by the World Bank, loaned Hidro Santa Cruz more than $8 million for the construction of dam.

Since 2009, Hidro Santa Cruz has been planning a series of dams on the Q’am B’alam river that surrounds the town of Santa Cruz Barillas. The river and its three waterfalls are considered sacred by the Q’anjob’al community, whose ancestors named the river “yellow tiger” in the Q’anjobal language after the animal that was said to drink from its waters. The project would be installed in an area used by the community for ceremonial, recreational, and agricultural purposes. The project will also have significant impacts on the already fragile natural environment. A study by the International Commission on Tropical Biology and Natural Resources found the area of Barillas to be of the highest priority for conservation efforts within Guatemala. Barillas is home to many amphibian and insect species found nowhere else in the world.

The community has twice held referenda and voted unequivocally to reject the exploitation of its natural resources by transnational companies. Nevertheless, the government approved the Cambalam I dam, without the Free, Prior, Informed Consent of the community. To date, 18 men have been arrested after speaking out against the dam, including Cecilia’s partner Ruben Herrera, and have been held imprisoned for up to 8 months at time before eventually they are released to do lack of any evidence of having committed crime. Two men have been killed, one, Andres Francisco Miguel, was shot at by security guards of the company in 2012, and another, teacher Daniel Pedro Mateo,was kidnapped while on his way to a community meeting training environmental defenders in 2013.

Below is the statement by Cecilia Mérida before the World Bank.  (read the original Spanish testimony, here)

I am Cecilia Mérida. I come from the department of Huehuetenango in Guatemala where the town of Santa Cruz Barillas is situated. The Spanish company, Hidralia Ecoener, came to Santa Cruz Barillas in 2008 to begin a hydroelectric project above the Cambalan River on the outskirts of the town. This was carried out without consulting with the population of the town. Hidralia Ecoener has received financing from the World Bank, the International Finance Corporation (IFC) and the Inter-American Corporation for Infrastructure Financing (ICIF). I am responding on behalf of everyone affected by the hydro project to various questions posed by Oxfam’s report for example: What are the consequences for people on the ground who have been affected by the projects, financed with this money that has come from so far away?

Hidralia Ecoener, incorporated as Hidro Santa Cruz S.A, insisted on the implementation of their project even though the population of Barillas held a community consultation in good faith in 2007, where they decided to protect their lands and territories in the framework of Collective Rights of Indigenous Peoples. The company hired local staff to oversee technical and political control of community organisation. In November 2009, the company sued eight community leaders including my lifelong companion, Rubén Herrera, Mr Pablo Antonio Pablo, and Saúl Méndez. This initiated the practice of prosecuting community leaders with crimes such as: burglary, coercion, threats, aggravated arson, actions against the security of the state, plagiarism, kidnapping, and terrorism.

This gave rise to social unrest in the town and there continued to be violations of human rights. All those who did not support the interests of Hidro Santa Cruz endured acts of intimidation, persecution and criminalisation. In 2011, Rubén Herrera was forced to leave Santa Cruz Barillas, abandoning his work and his involvement with the youth in the town. (abandonando su trabajo y procesos de acompañamiento social a la juventud del municipio.) Towards the end of 2011 and the beginning of 2012, the conflict escalated to such a degree that the government of Guatemala declared a state of siege in Santa Cruz Barillas, and was able to suppress opposition to the hydro project and facilitate the continuation of Hidro Santa Cruz’s work. The campesino leader, Andrés Francisco Miguel was murdered on May 1st 2012, in an act directed at Pablo Antonio Pablo, who was seriously wounded. The security guards of the company participated in this armed attack and they were acquitted by the Guatemalan courts a year later.

In the wake of the events of May 1st 2012, 17 illegal detentions of community leaders occurred, including Saúl Méndez and Rogelio Velásquez. Nine were imprisoned unjustly for nine months, and none of them were proved to be guilty. Rubén Herrera was arrested on March 15th 2013, on demand from Hidro Santa Cruz. He was in prison for three months and was finally released on February 26th 2014 because the Judge considered that there was not any just cause to process the allegations against him.

In August 2013, Saúl Méndez and Rogelio Velásquez were captured again, accused of murder, femicide and lynching. Those of us in their defence are convinced that this case was assembled by operators of Hidro Santa Cruz, as part of its strategy to criminalise community leadership. After a corrupt trial, they were sentenced to 33 years in prison. Currently the case is under Special Appeal.

In September 2013 another community leader called Mynor López was captured illegally. Later that month, the Guatemalan army and the National Civil Police practically launched a military offensive against the civil population of Santa Cruz Barillas. This has never been seen before, not even during the internal armed conflict, at least not in this municipality.

In February 2015, three other community leaders were detained and imprisoned. Adalberto Villatoro, Francisco Juan and Arturo Pablo (son of Pablo Antonio Pablo). They share the beliefs of everyone else who I have mentioned because they think that the presence of Hidro Santa Cruz is detrimental, and that it will seriously affect the natural surroundings, environment and culture of the area.

What are the human costs of loans from financial intermediaries when social and environmental safeguards do not work? The human costs are very high and painful. They materialise as persecution, murder, imprisonment and criminalisation. During the last few years, the communities have not received a single benefit. On the contrary, they have left a peaceful and quiet life for one of fear and terror. All of the energy and human potential has not been devoted to working towards local development from our own perspectives and aspirations; instead we have had to defend ourselves from the abuses of the company, Hidro Santa Cruz.

The human costs materialise in suffering families, wives, and children, due to illness and insecurity. We devote our lives and what little we have, to travel to the prison which is more than 400 miles away, where we seek private rooms with our spouses. All of the communities in this conflict are innocent and yet, it is us who suffer from the effects of bank loans which were thought to “produce development”. For us, the pain and suffering “is the human face of these projects”. We live with the real consequences each day as well as being, as Oxfam’s report indicated, “the poorest and most vulnerable people in developing countries”.

We also have questions: Who will pay us all of the costs that we have had to suffer, for a project that our community never asked for? Will it be the World Bank, the International Finance Corporation, ICIF, or Hidro Santa Cruz who are going to compensate us for all the economic, social, and organisational damages which have resulted? Who will return to the families, the years which men have spent in prison?  We know that none of those who have died will come back to us.

With information from NISGUA