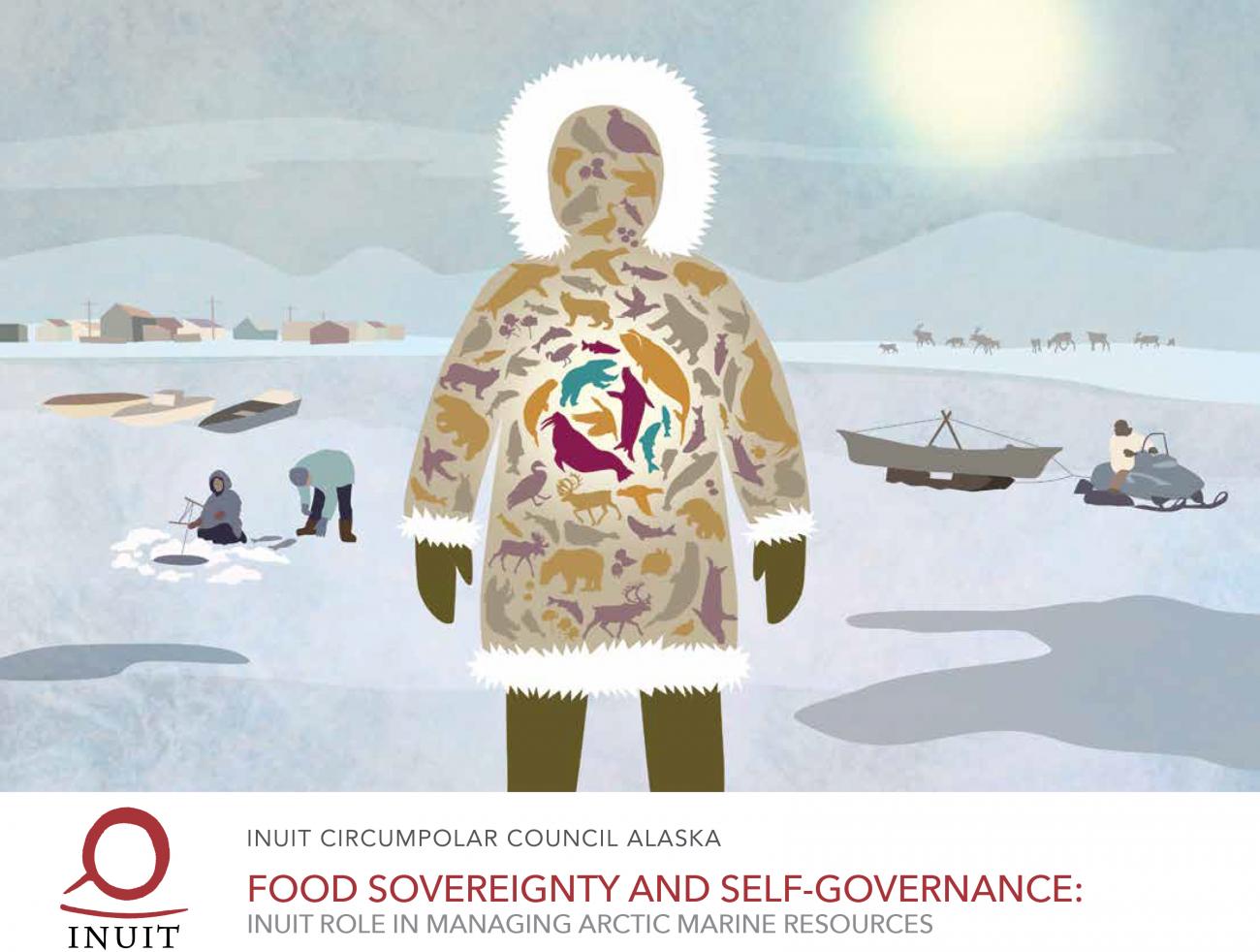 September 14, 2020 Anchorage, Alaska – The Inuit Circumpolar Council Alaska, in collaboration with partners, is pleased to release the report: Food Sovereignty and Self-Governance - Inuit Role in Arctic Marine Resource Management. This Inuit-led report illuminates the unique and rich Inuit values and management practices that have successfully safeguarded the Arctic for thousands of years.

We, Inuit, are at the forefront of the drastic changes taking place in the Arctic. As the world community increasingly turns its focus to the Arctic, it is important to ensure that Inuit Food Sovereignty is a priority in every context. This report links Inuit Food Sovereignty to holistic and adaptive management strategies that can ensure the food security, health, and well-being of Inuit throughout the Arctic for generations to come.

The legal systems summarized in the report were formed at a time when Indigenous Knowledge and Inuit management approaches were not given the respect and recognition they deserve by western cultures. For thousands of years, we have thrived in the Arctic. Our culture is rooted in values that shape the relationships we hold with everything within the Arctic ecosystem. Our values—including respect, collaboration, and sharing—all aid in supporting healthy and harmonious relationships and communities. These values are the core of our traditional management practices.

Western management systems overlaid on top of traditional Inuit practices often take a different approach, sometimes grounded in historical discrimination. This report elevates our values, knowledge, and practices to bring forward the roles and perspectives of Inuit to support equity and food sovereignty.

The report uses four case studies focused on walrus, char, beluga, and salmon as a lens to explore current management and co-management practices in Alaska and the Inuvialuit Settlement Region. The report further offers snapshots of important connecting components, such as climate change, the need for an ecosystem-based approach, the impacts of imposed borders, and the strength and resilience of Inuit culture. Throughout this work, the authors have emphasized the importance of law and policy reforms needed to capture the perspectives of Inuit. In addition, the interpretation and implementation of such law and policy must be understood in relation to how they support or impede our food sovereignty in a rapidly changing Arctic.

All of the dimensions of self-determination related to management and co-management are reflected in the transformative recommendations offered by the contributing authors. These recommendations span across national and international realms. If implemented, the recommendations will support Inuit food sovereignty, holistic and adaptive decision-making, and the well-being of the entire Arctic.

This project was conducted in partnership with the Eskimo Walrus Commission, the Inuvialuit Game Council, the Fisheries Joint Management Committee, the Kuskokwim River Inter-Tribal Fish Commission, the Association of Village Council Presidents, Environmental Law Institute, and advised by ICC Canada. The report is a product of over 90 Inuit authors and a nine member Advisory Committee.

This report will be of use to a broad spectrum of people. Inuit communities and co-management groups may use the reports to aid in communicating with those from outside their communities. Decisionmakers, federal/state/territorial governments, academics, environmentalists, policy-makers, and industry may use the Final Report as a tool to enhance their understanding of the Arctic and to heighten Inuit Food Sovereignty.

This report is accessible on our website at www.iccalaska.org. The following link will take you directly to the report – https://iccalaska.org/media-and-reports/inuit-foodsecurity-project/

Founded in 1977 by the late Eben Hopson of Sr. of Utqiagvik (formerly Barrow), Alaska, the Inuit Circumpolar Council (ICC) has flourished and grown into a major international non-government organization representing approximately 180,000 Inuit of Alaska, Canada, Greenland, and Chukotka (Russia). The organization holds Consultative Status II at the United Nations Economic and Social Council and is a Permanent Participant at the Arctic Council. To thrive in our circumpolar homeland of Inuit Nunaat, we had the vision to realize that we must speak with a united voice on issues of common concern and combine our energies and talents towards protecting and promoting our way of life. ICC represents the interests of Inuit and we have offices in four Arctic regions – Alaska, Canada, Greenland, and Chukotka. Though each of our communities are unique, we are one people, in a single homeland, across four countries.