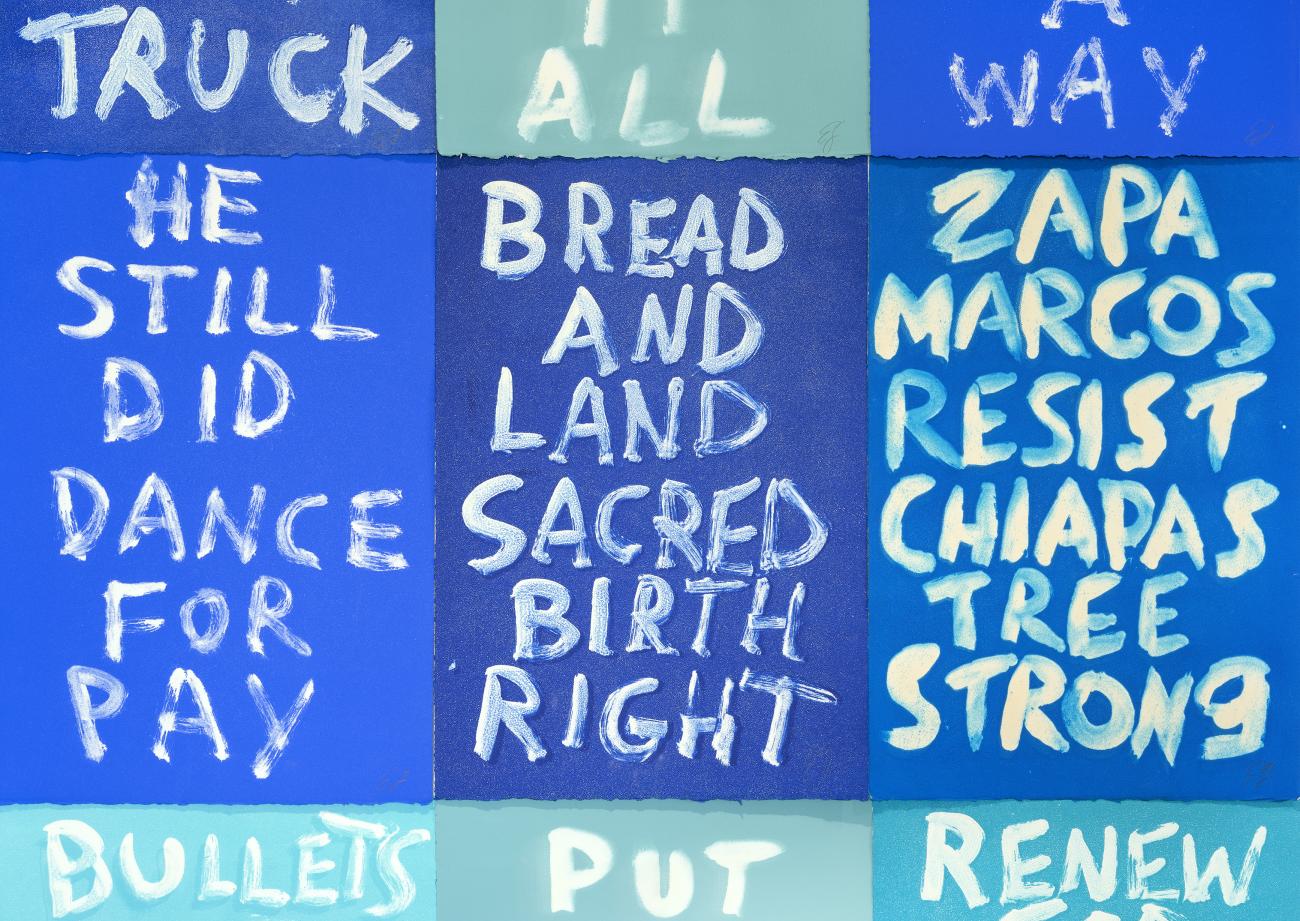 TEN AT SEVEN, established in 2019, is a curatorial project that consists of an exhibition, publications, and social gatherings in the New York City home of Susan J. Weiler. In this private intimate setting, artists, scholars, and invited guests engage in discussions about the intersections of social justice activism and the arts.

Give me your hand, dove, so that I may climb into your nest curated by Candice Madey, is TEN AT SEVEN’s first exhibition and was on display on May 22 - September 27, 2019. It featured Edgar Heap of Birds  (Cheyenne/Arapaho) and artists Sofia Cordova, Pam Lins, Jake Kean Mayman, and Sheila Pepe, all of whom visually challenge U.S. policy in the Americas, critique the negative impact of historical and contemporary political practices on their respective communities and land bases, and view the possibilities of using “the potent strength of language, ritual, and poetic action as regenerative processes.” 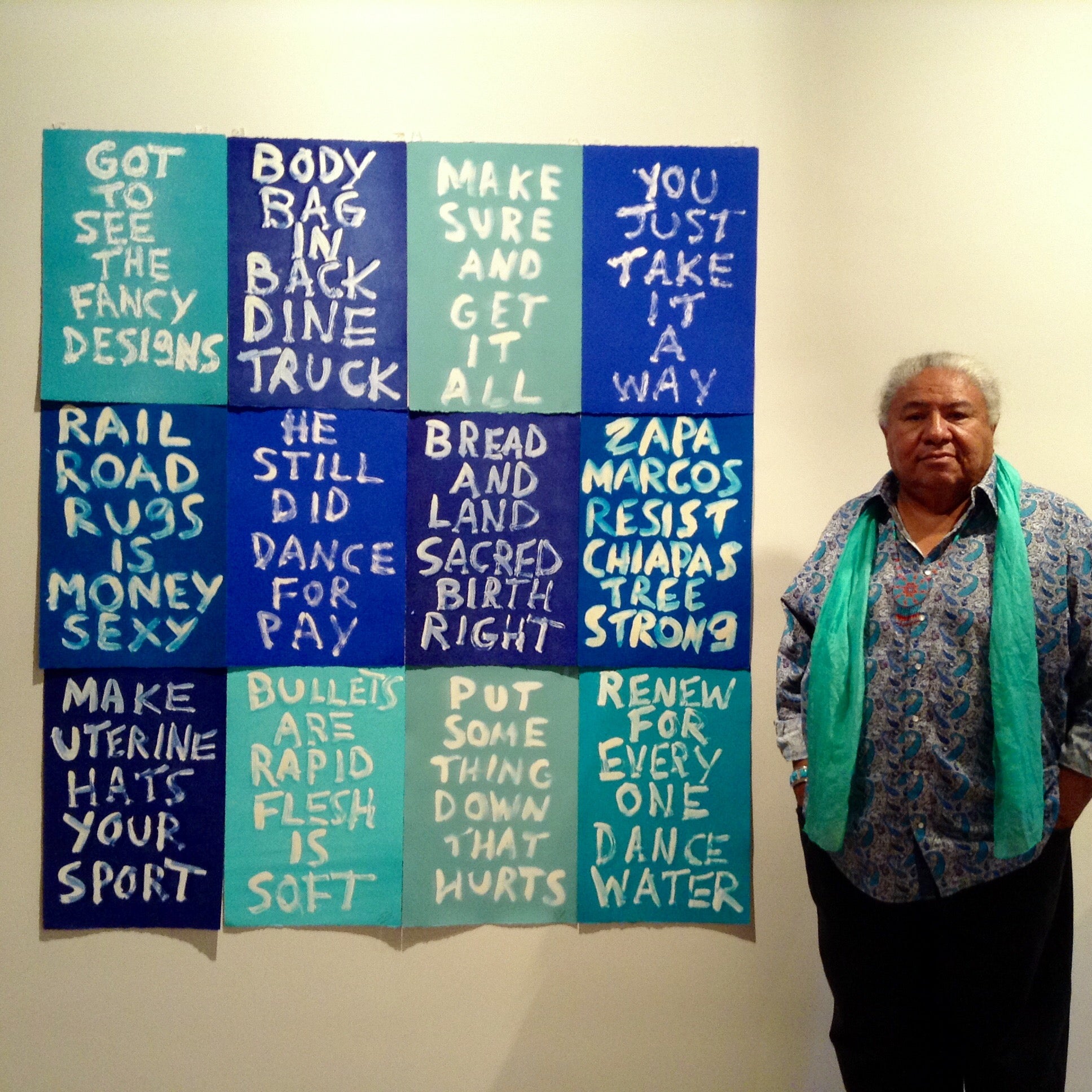 For TEN AT SEVEN, Edgar Heap of Birds exhibited, Diné Body Bag (2010-2017). The inspiration for the title and imagery is a personal, family incident in which a Diné Tribal elder’s body was transported to his funeral in a coroner’s body bag instead of the customary coffin because of family financial hardship. Like much of his work, Diné Body Bag, is an installation of monoprints with texts that call for action, poetic statements that reference injustices, misconceptions about Native Americans, and racist stereotypes, placed against a colorful background, in this case shades of blues. Twelve statements are laid out in a rectangular format, four on each row, made with ink on rag paper. The top row includes the monoprint that refers to the entire works’ title with the statement, “Body Bag in Diné Truck.” 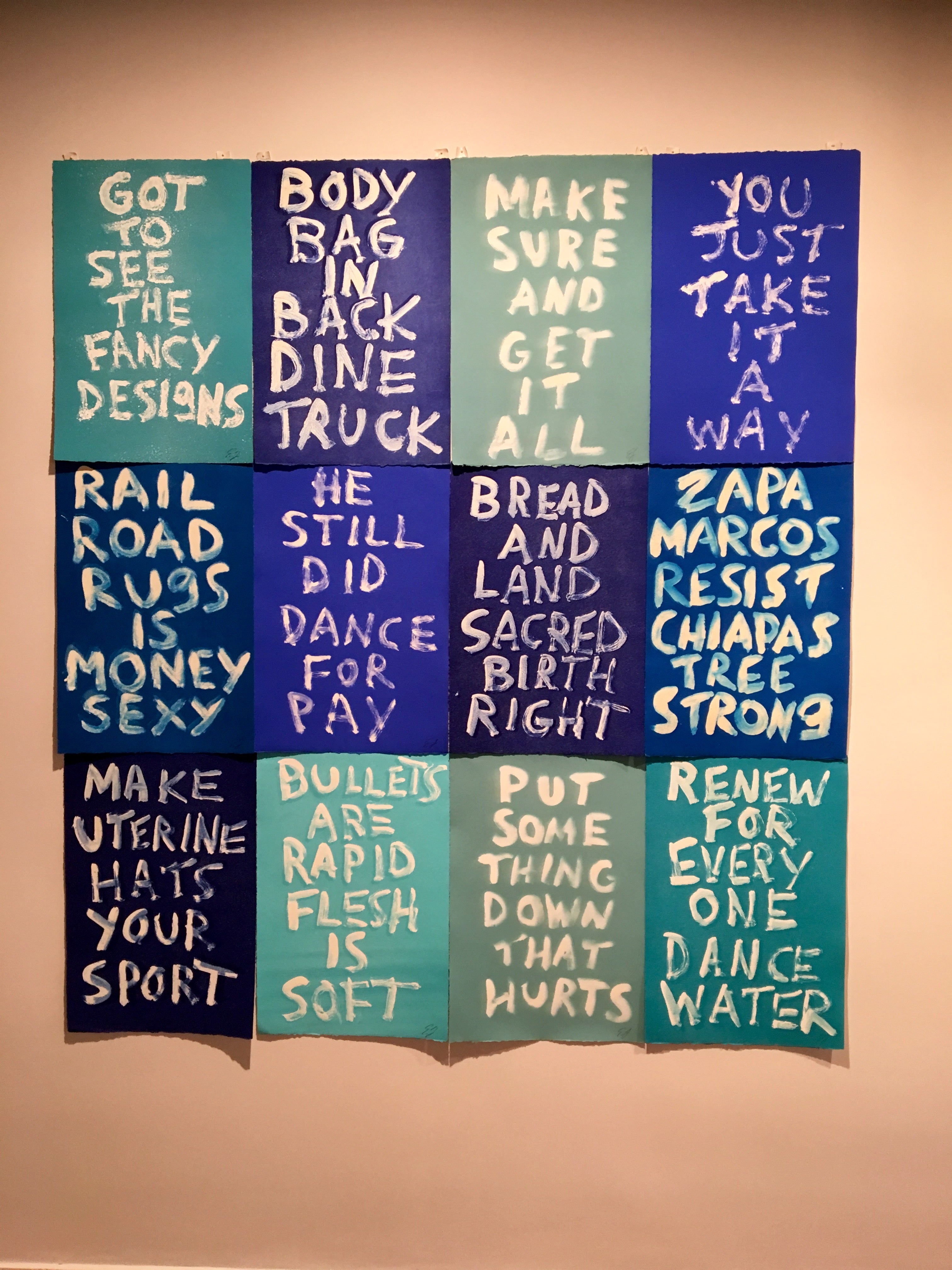 Viewers face statements that deal with specific historical events, places, and people such as “Zapa Marcos Resist Chiapas Tree Strong,” as well as statements that can be interpreted as “universal,” have mixed meanings, puns, and sarcastic humor. Heap of Birds often states that he likes for his audience to share their particular insights on the separate texts and also the unifying factors of the various statements placed together as one unit. 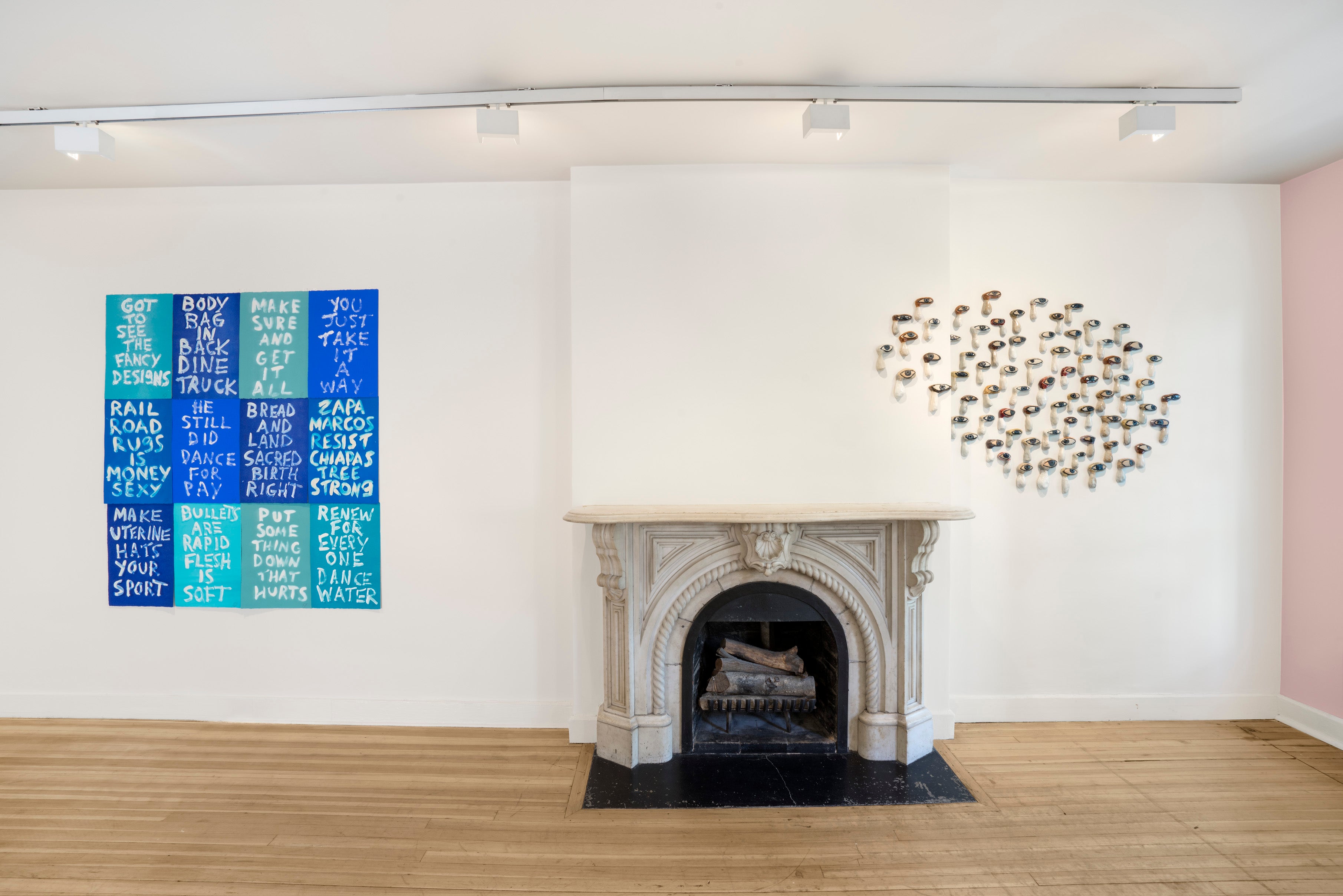 Considering that this article is being written and published so close to the infamous October 14 Columbus Day Holiday, I am drawn toward the print titled, Make Sure And Get It All and also You Just Take It A Way. I am reminded that Columbus and later conquerors and settlers tried to and basically succeeded in getting it all --the land, and taking it away --natural resources and minerals, Indigenous foods and plants, and even people who were treated like objects.

This “take it away” phenomenon is also aptly dealt with by the curator Candice Madey and Heap of Birds in the exhibition catalog. Heap of Bird’s 2006 residency in Chiapas, Mexico, left a deep impression on him as he became more aware of how the color azure blue, “permeates sacred artworks from the Mayan era through present day craft.” Maya people created the color around 300 CE by mixing dye from indigo plants with a rare clay mineral. The blue pigment the Maya developed predates the use of ultramarine blue in European Renaissance painting.

Azure pigments and cochineal red were natural resources exploited and taken away by the Spanish during the 16th century (“You Just Take It A Way”). Just as azure blue was used in sacred Mayan art, Heap of Birds uses blue as a background color in this current work to symbolize the water and sky spirits in Cheyenne-Arapaho cultural traditions. And as Edgar Heap of Birds pointed out in our discussion at the gallery, some statements can pertain to all people, not just Native Americans.

Text such as “Bullets Are Rapid Flesh Is Soft,” is a reminder of the mass shootings that are so prevalent now in the U.S. Exhibiting in New York venues such as Susan Weiler’s West Village townhouse gallery is not new to Heap of Birds. Although born in 1954 in Oklahoma and still based there where he taught at the University of Oklahoma from 1988-2018 and is currently a leader of the Cheyenne Tsitsistas Elk Warrior Society and a ceremonial instructor of the Earth Renewal Worship, Edgar Heap of Birds also considers New York City and other urban areas as “places and spaces informative for [his] work.” An early text based series, American Policy (1987), is in New York’s Whitney Museum of American Art’s permanent collection. Other New York art venues include MoMA PS 1, the National Museum of the American Indian’s Manhattan site, State University of New York, Purchase Campus, and the Metropolitan Museum of Art, where his work is currently being shown with esteemed artists Schnabel, Johns, Legon, Warhol, and Rauschenberg. 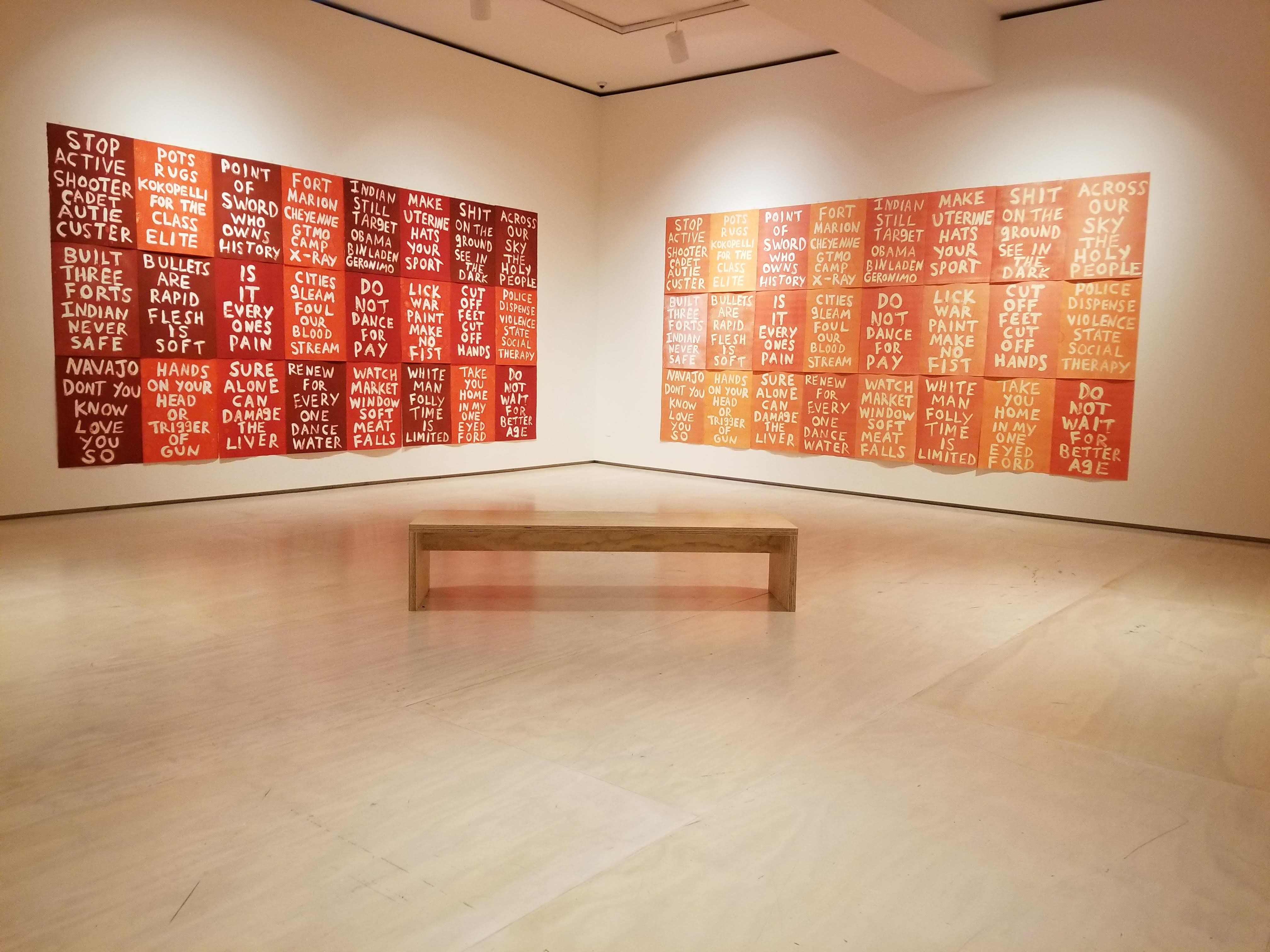 The recent exhibition, Surviving Active Shooter Custer, was on view March 31-September 8, 2019 at the Museum of Modern Art’s satellite MoMA PS 1, a former public school. As stated on their website, “His work often draws parallels between historical violence and ongoing injustices today. By employing the term, ‘active shooter’ to characterize massacres committed by U.S. troops against Native Americans over a century ago, Heap of Birds reanimates the past in the language of the present.” The exhibition includes drawings, prints, and steel parking signs placed throughout the museum that reference forced relocations of Native American Tribes to Oklahoma, including some New York Native communities. 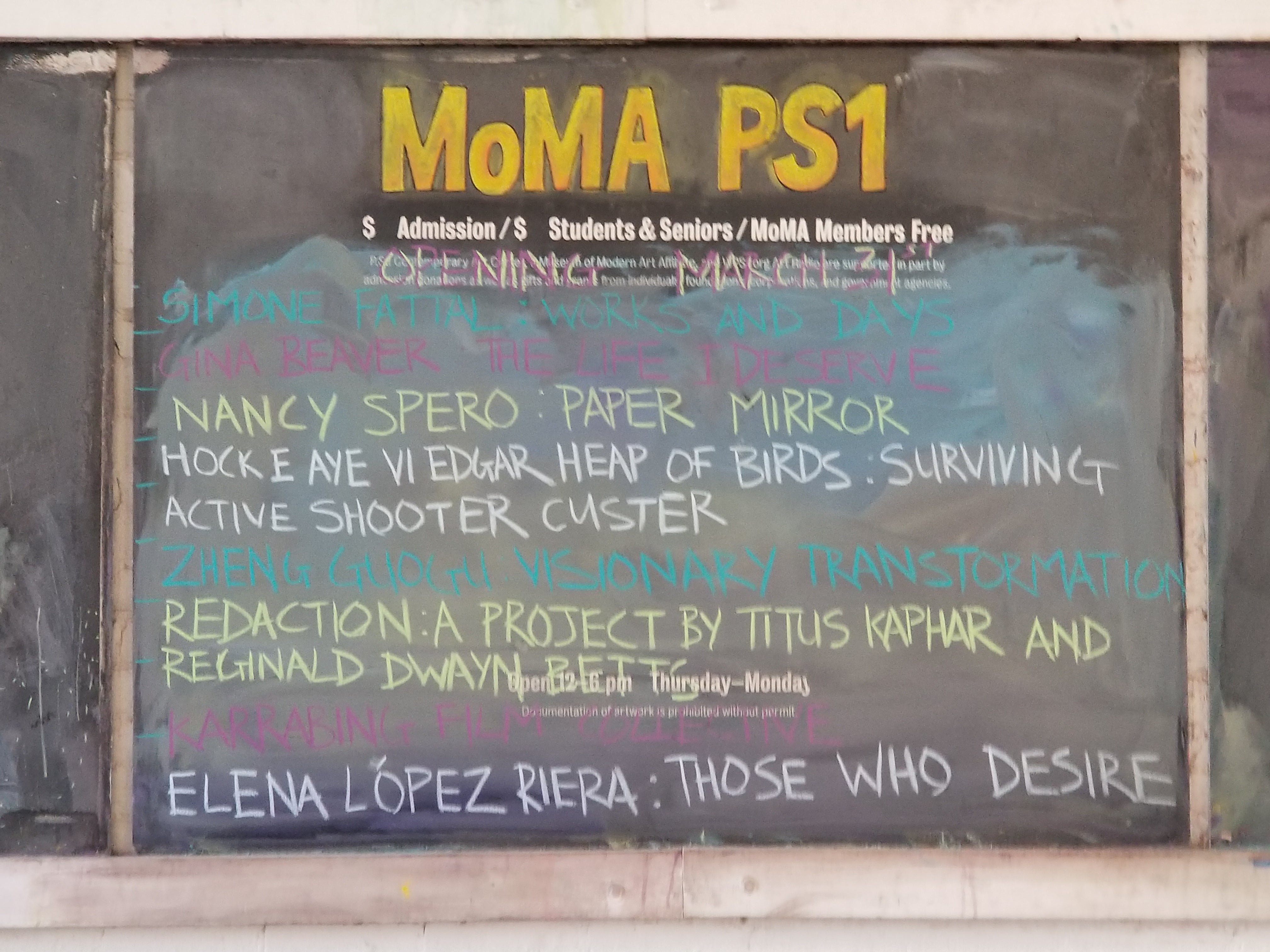 Acclaimed past exhibitions of Heap of Birds in New York include Native Hosts (1988) and the Reclaim series installed on the campus of SUNY Purchase as part of the Neuberger Museum of Art 1997 Biennial Exhibition of Public Art. Works in both of these shows resonate with his current body of work, Diné Body Bag and with pressing 2019 issues facing Native Tribal lands in Long Island, NY. Native Hosts consists of twelve aluminum signs, six of which were displayed in New York City’s Hall Park. Texts were silkscreened in red letters against a white background with the names of New York Tribes that once occupied the area as well as those who still live in the state. Referenced Tribes were the Mohawk, Cayuga, Mahican, Manhattan, Montauk, Oneida, Onandaga, Poosepatuck, Seneca, Shinnecock, Tuscarora, and Werpoe. Written backward was ﻼЯOY WƎИ/TODAY YOUR HOST/IS…..the name of a specific Tribe.

In Reclaim, placed along the entryway is a mock design of a New York interstate sign. The text on the sign is, “New York, Purchased?, Stolen? Reclaimed?” 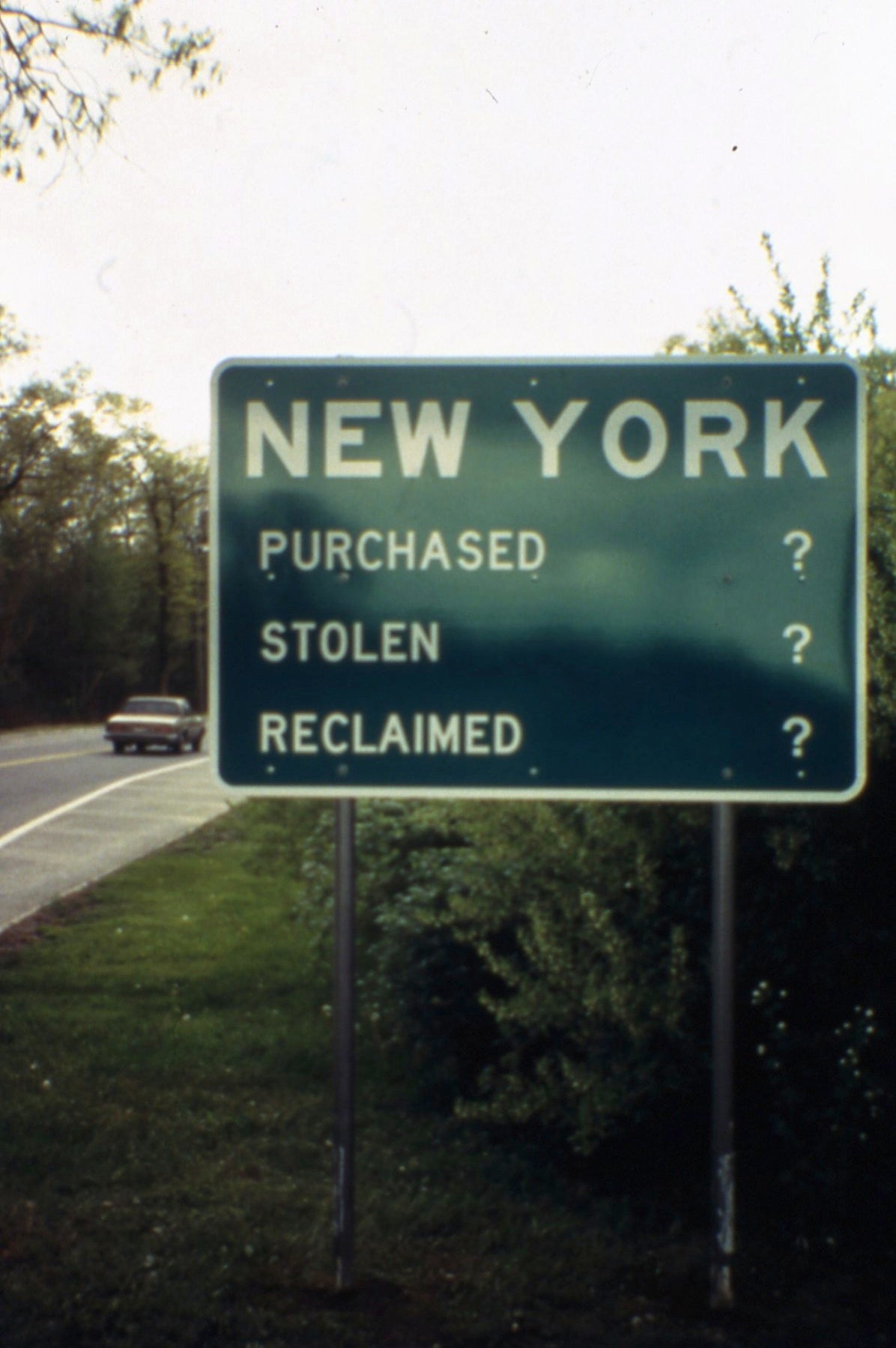 Fast forward from 1997 to June 2019 and a recent Cultural Survival news item stating, “the State of New York is targeting the Shinnecock Indian Nation’s right to use their sovereign land by legally contesting their construction of an electronic billboard on Sunrise Highway in the Hamptons.” The billboard was erected to raise ad revenue and as a monument marking traditional Shinnecock lands. The State of New York Government does not think the billboard matches the area’s aesthetic. 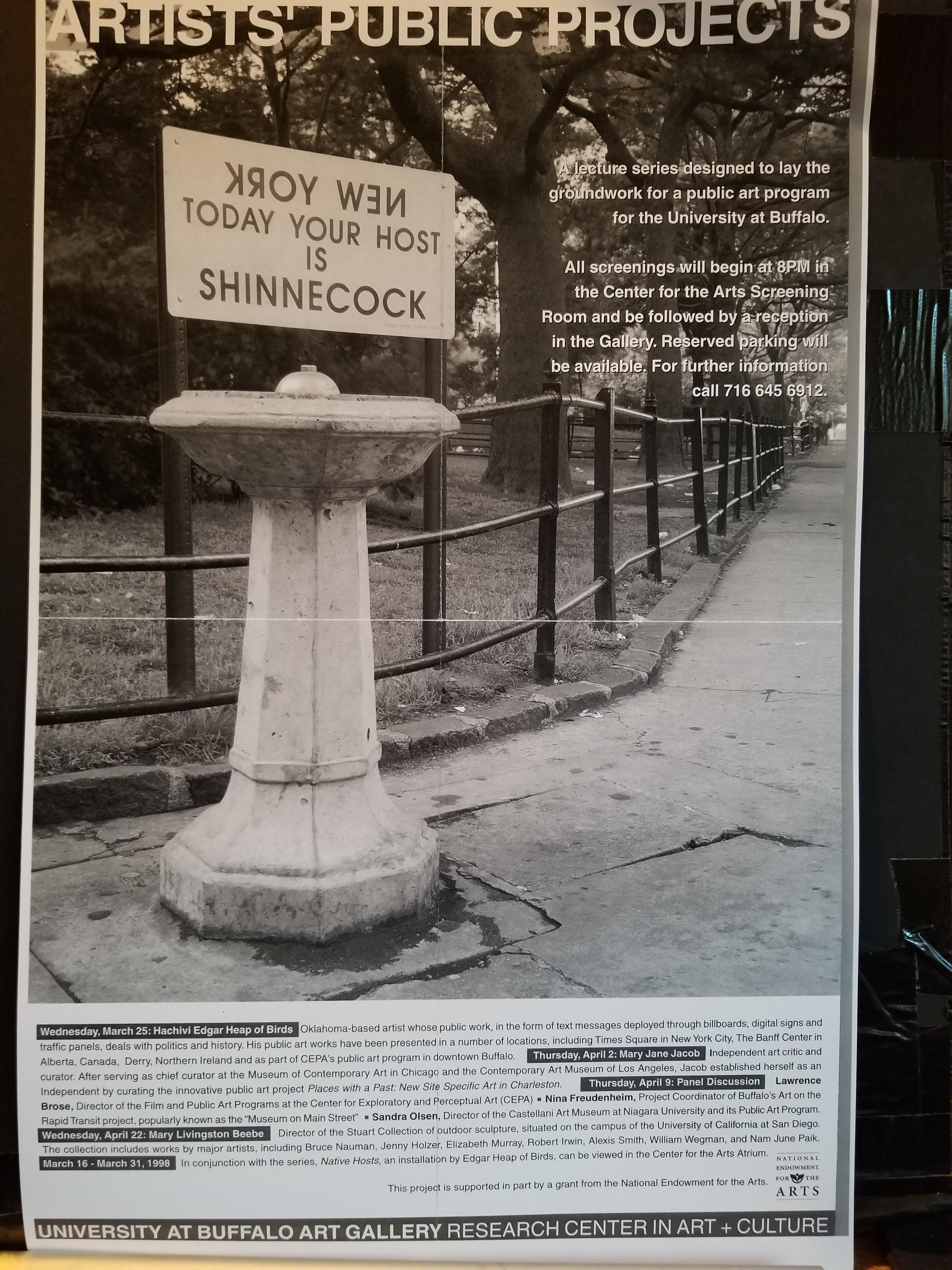 A world traveler, Edgar Heap of Birds also engages with international Indigenous artists in diverse locations such as Brazil, South Africa, Australia, Zimbabwe, and Chiapas, Mexico. His art related national and international residencies are a wonderful fit for the title of this 2019 New York based exhibition, Give me your hand, dove, so that I may climb into your nest. Like the dove that symbolizes peace, Edgar Heap of Birds’ theme based installations seek peace, justice, and homes (nests) for his Indigenous Peoples in Oklahoma, Native communities all across Turtle Island, and places around the globe where Indigenous people are trying to live with dignity.