Earth Day is Every Day! 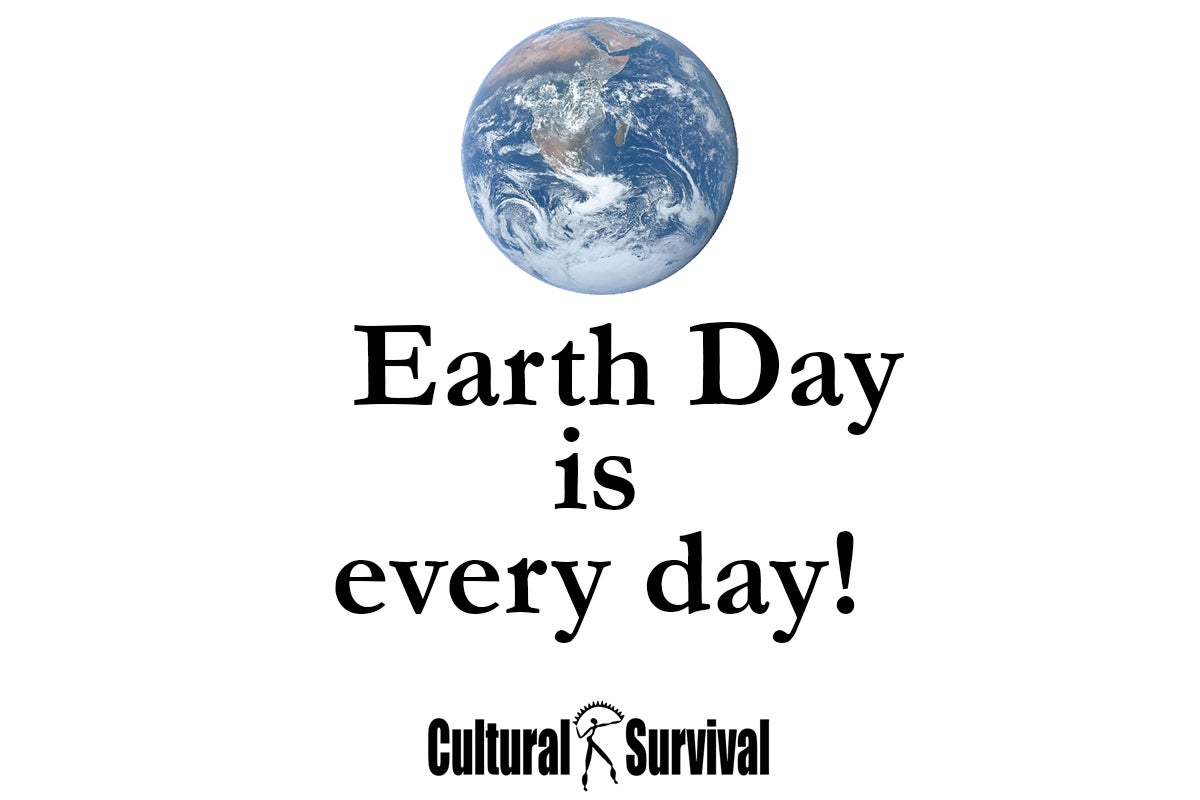 Since 1970, every year on April 22 people across the globe join together to celebrate Mother Earth. In 2009, the UN General Assembly proclaimed April 22 as International Mother Earth Day. For many Indigenous Peoples, we celebrate this gratitude every day. "As our bodies originated of her, we properly regard her as our Earth Mother. Her life is our life. We are born of her, we belong to her and she belongs to us as a mother and child belong to each other," explains Duane “Chili” Yazzie, a Diné elder and Tribal leader in his essay "Our Earth."

It is no coincidence that when the World Wildlife Fund listed the top 200 areas with the highest and most threatened biodiversity, they found that 95 percent are on Indigenous territories. It is estimated that Indigenous territories contain 80 percent of the Earth’s biodiversity and Indigenous lands also hold unquantified megatons of sequestered carbon as 11 percent of the planet’s forests are under their guardianship. Yet, these regions face rapid loss of biodiversity and climate change effects resulting from the fossil fuel-based industrialized global economy and natural resource extraction.

In response, Indigenous Peoples have been calling for a shift in mainstream consciousness. Indeed, the COVID-19 pandemic has made it clear that we need to focus on collective wellbeing over profit and greed. "The simplification of wealth has led to the belief that money is the only solution, but there are multiple solutions to holding our space on this planet and being in a relationship and in equilibrium with it. [We value] having a multitude of relationships. That's why when we pray, as Indigenous Peoples, we pray for all of our connections and relations in the world. We pray not only with human beings but with the natural world. We do not objectify nature—animals, stones, birds, and rivers are our participants in this life, and they have an indirect relationship with us," says Cultural Survival Executive Director Galina Angarova (Buryat).

Join us in celebrating Indigenous Keepers of the Earth today and every day!

Ishey Angmo (Ladakhi) from northern India is a 2021 Indigenous Community Media Youth Fellow. Her fellowship project, titled “Youth Empowerment Through Media to Protect Indigenous Culture, Tradition and Land,” aims to bring change in Ishey’s community through media and promote the voices of younger generations. The video uplifts the voices of Indigenous Ladakhi youth speaking about the impacts of climate change in their community and the importance of caretaking of their pristine territory for future generations. 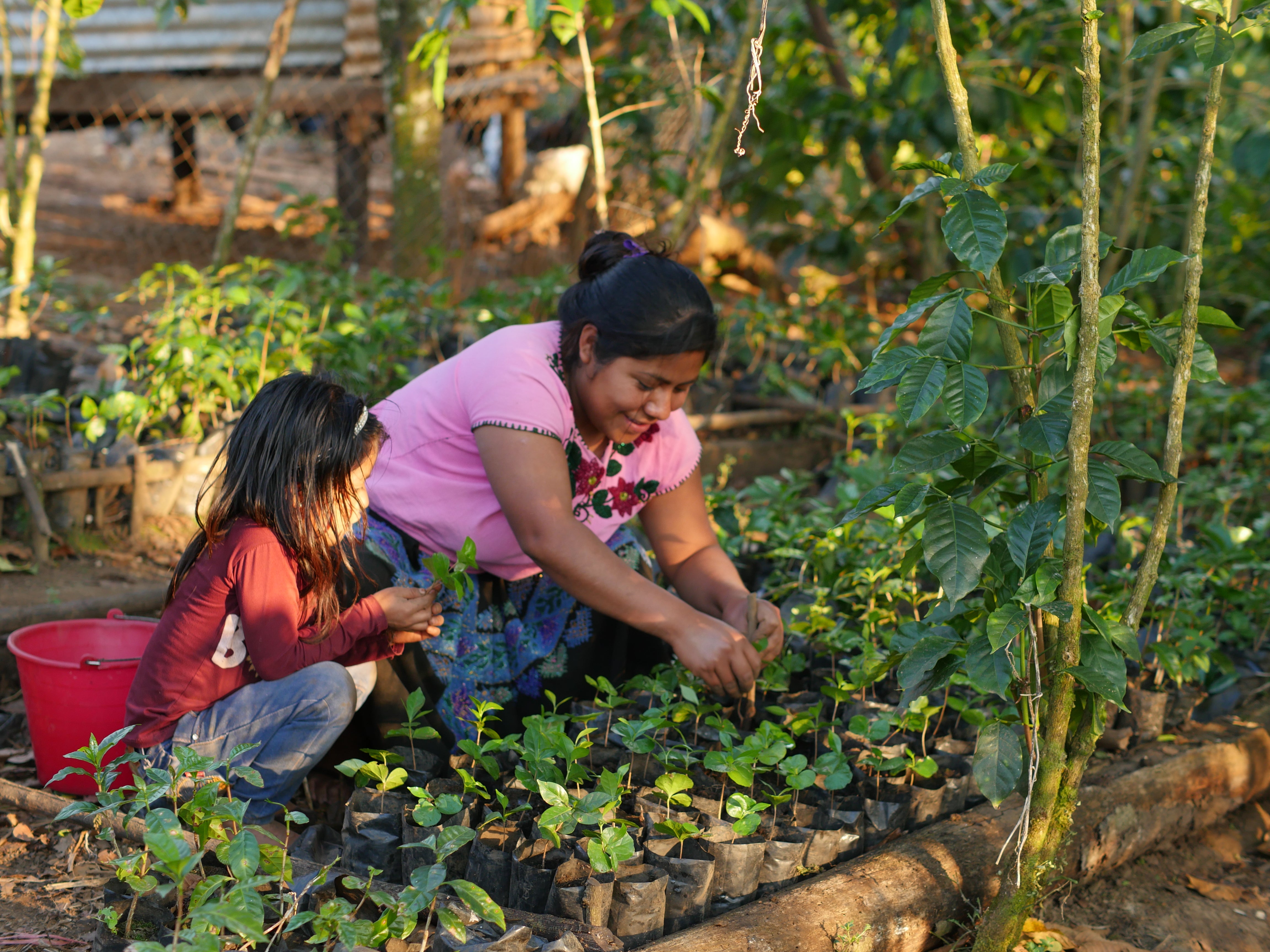 Ana María Vázquez Hernández (Tzotzil) is an Indigenous Community Youth Fellow from Naranajatic Alto, Chenalhó, Chiapas, México. Ana is a filmmaker working on a film about Zapatista women who now are coffee producers. This photo documents Faustina Cruz teaching her daughter to plant coffee, one of the first stages of coffee activities, since they are engaged in agriculture as an economic activity. In the Tsotsil culture, agricultural knowledge is transmitted to children at an early age so they know the value of work and that everything has to be done with respect for Mother Earth. 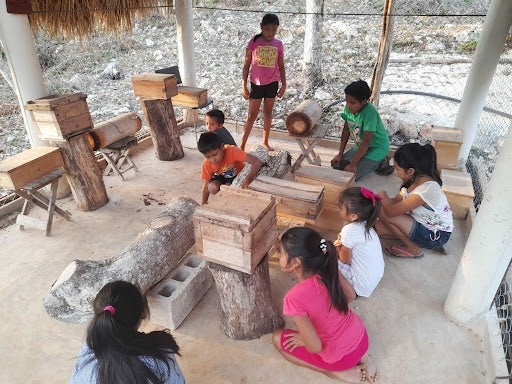 Lissandra Mukul (Maya Yucatec) is an Indigenous Community Media Youth Fellow from Chacsinkin in Yucatan, Mexico. Along with other fellows (Alan Canche, Yeraldi Colli, Yoselin Mukul, Nicolas Mukul, Julieta Canche, Yuliana Mayrin, and Pedro Nah), they are working on planting projects as well as keeping of endangered stingless Melipona bees. “Taking care of the bees is connected to taking care of our planet,” they say. 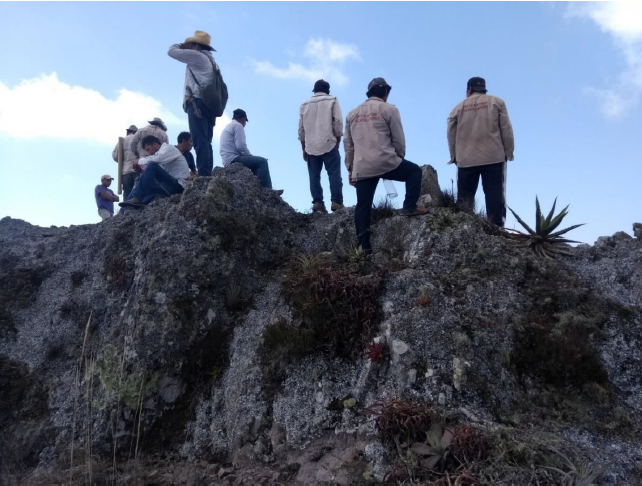 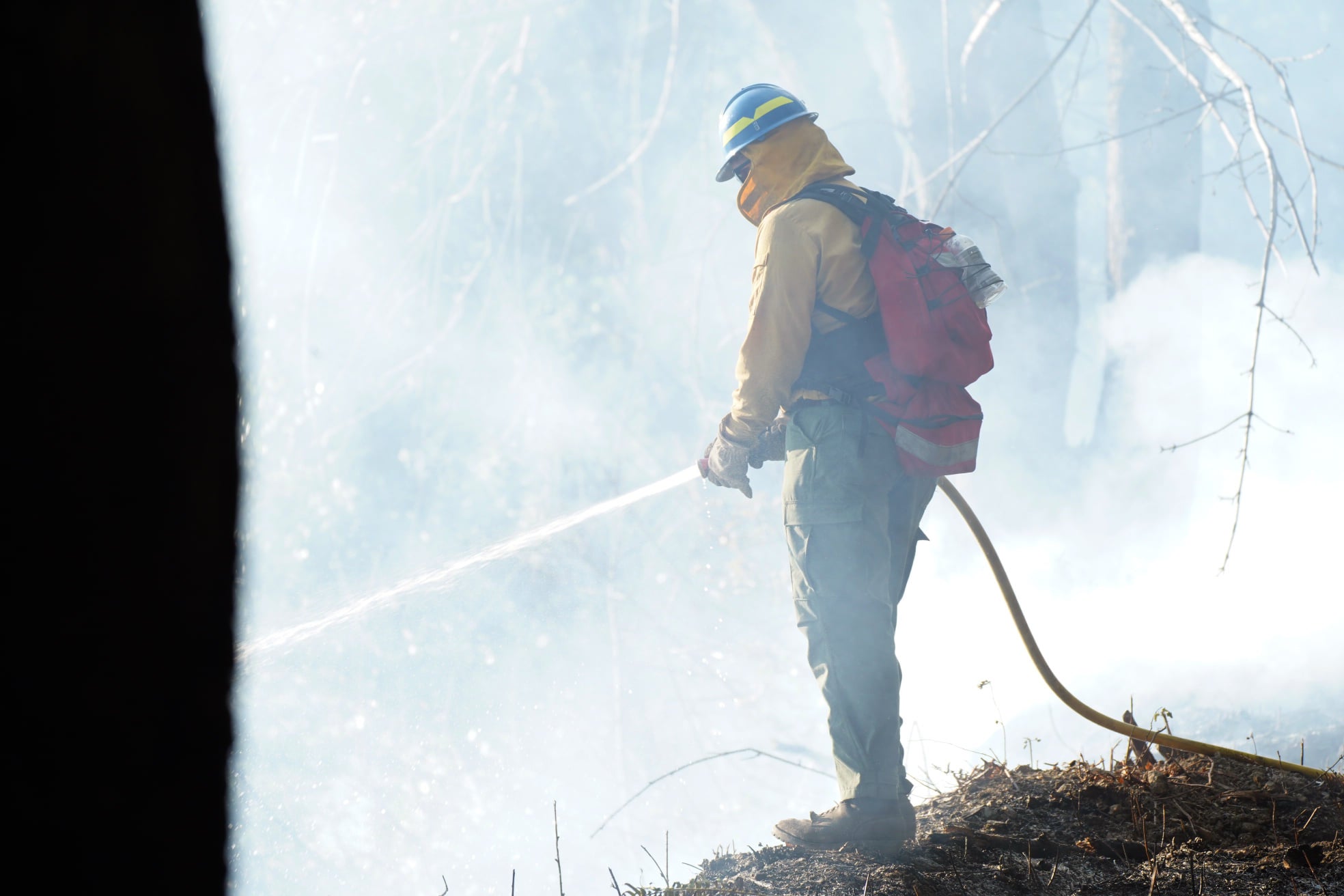 The Yurok Tribe Environmental Program (YTEP) Food Sovereignty Division, California, United States
The Food Sovereignty Division of the Yurok Tribe Environmental Program, a 2021 Keepers of the Earth Fund grant partner, is mapping burn areas on their ancestral territory as a means to protect it from wild fires. The map will be used by Yurok authorities to plan actions such as cultural burning rooted in Indigenous knowledge. 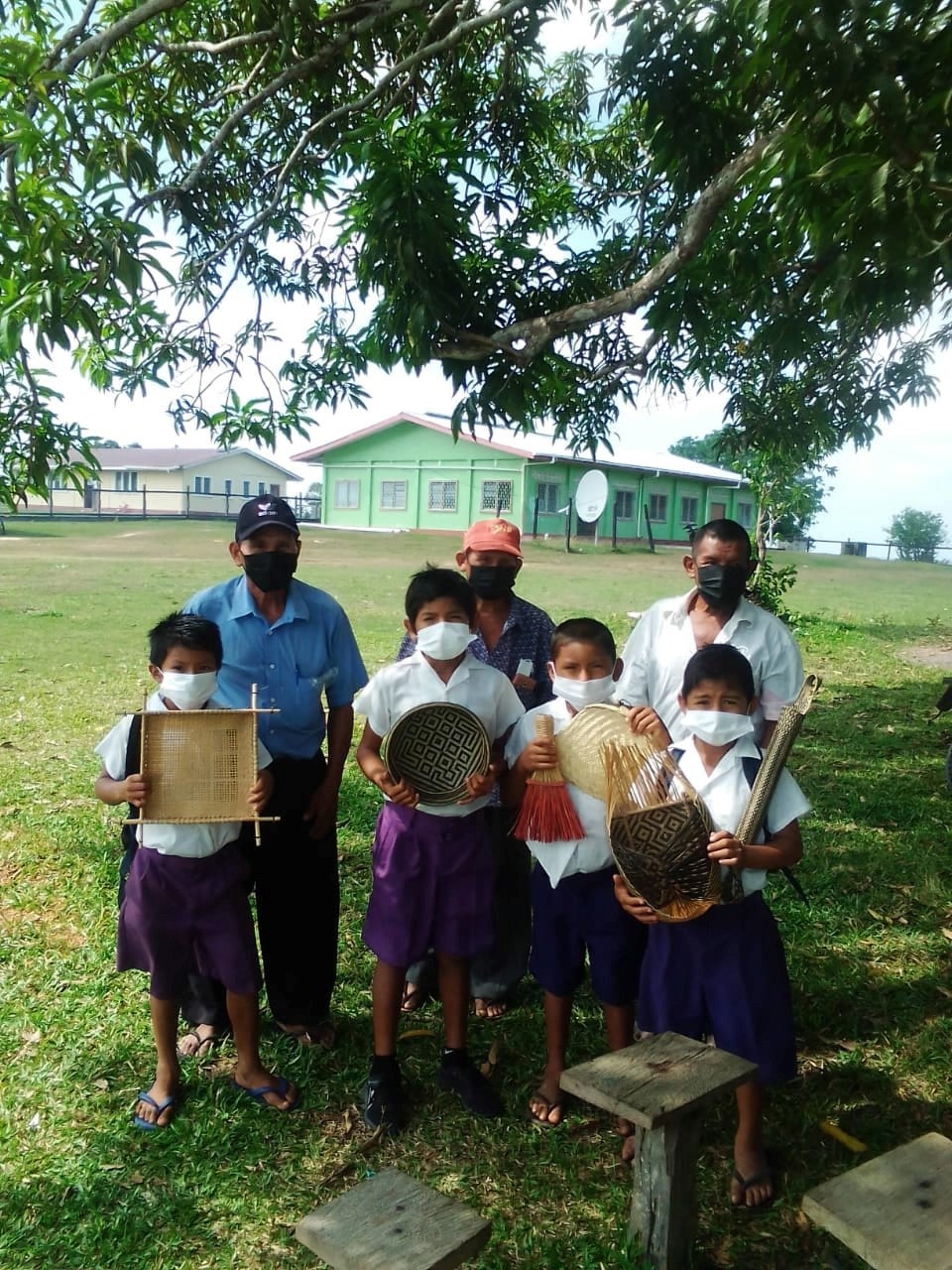 South Rupununi Conservation Society (Wapichan and Macushi), Guyana
The Rupununi region is one of the largest and most pristine biodiversity hotspots in the world, stewarded by Indigenous Peoples like the Wapichan and Macushi. Thanks to traditional practices and stewardship, the land has been managed in a sustainable way for generations. Over the past few decades, village elders have observed that the youth are not learning traditional knowledge. South Rupununi Conservation Society, a 2021 Keepers of the Earth Fund grant partner, seeks to teach the youth traditional skills. They held long workshops and courses to teach the youth and children traditional skills in cotton spinning, basket weaving, arrow making, and traditional medicine for a sustainable way of life that preserves the environment.

Indigenous community radio plays an essential role in the protection of the environment. Stations broadcast important information in Indigenous languages about Indigenous knowledge, environmental stewardship, and local threats to biodiversity. Here are a few of our Indigenous Community Media Fund partners at work. 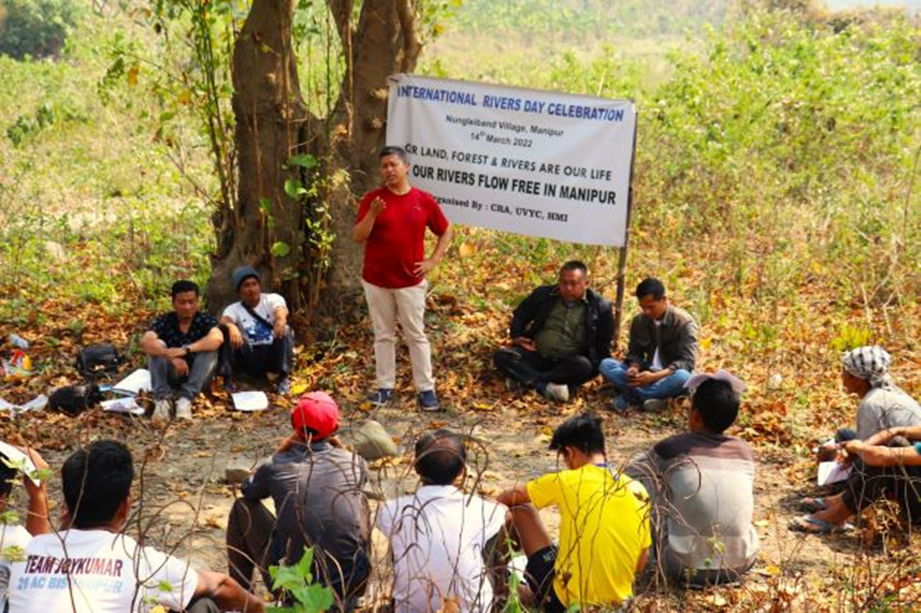 Citizen Radio is an independent media outlet and internet radio station operating in Manipur, India, whose goal is to strengthen democracy, respect human rights, and promote the right to freedom of opinion and expression. With grant funds, Citizen Radio is implementing their media campaign on land, resources, economic, social, and political issues affecting Indigenous communities. In the photo, they’re covering the celebration of International Rivers Day and raising awareness about the importance of protecting rivers. 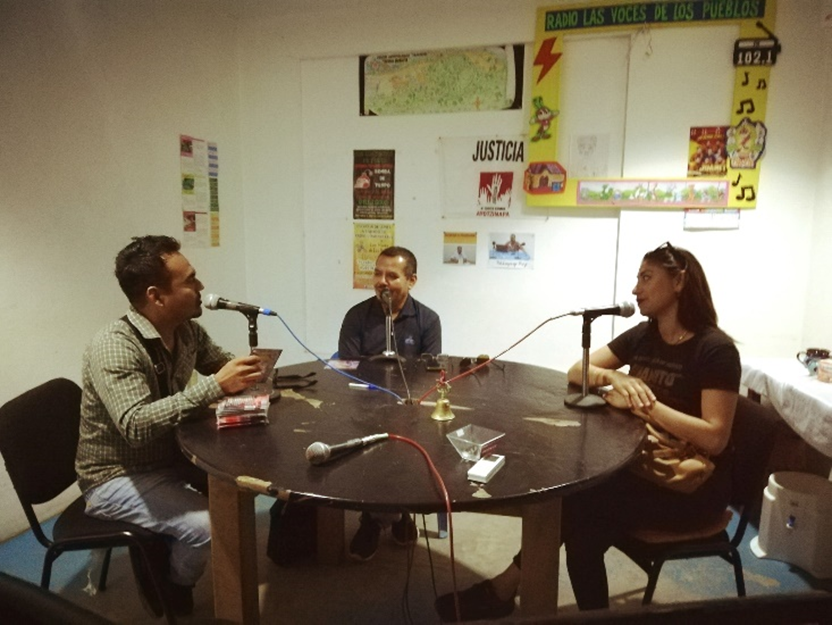 Radio Las Voces de los Pueblos from Oaxaca, Mexico is working on radio programs to inform the Istemeño population about the social, economic, cultural and environmental consequences of the Isthmus of Tehuantepec Inter-Oceanic Corridor Megaproject in Oaxaca, México. 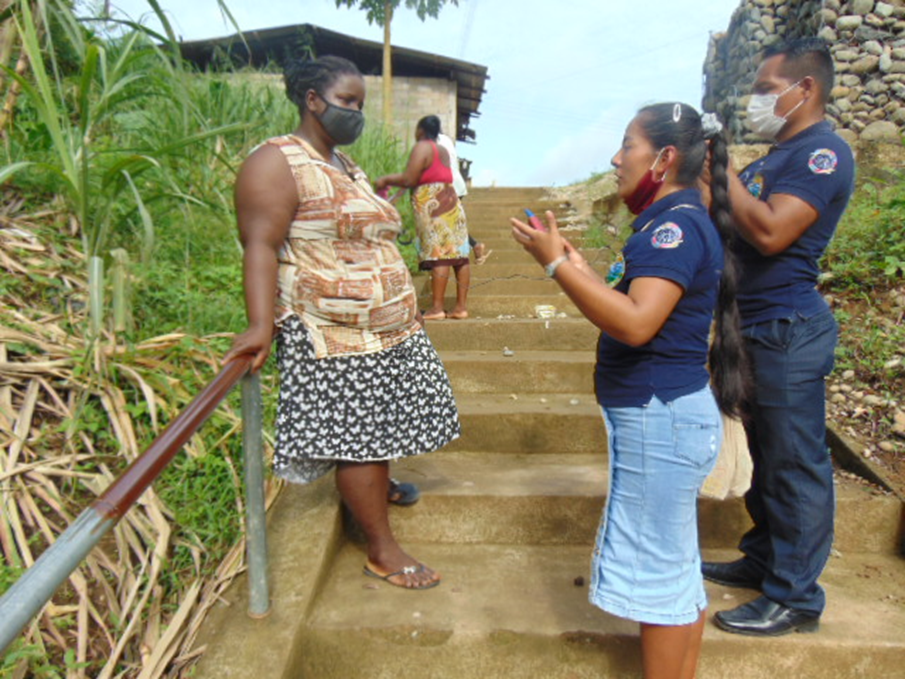 Great Awá Family, (Awá Nation), Ecuador and Colombia, received a multi-radio grant in 2021 from Cultural Survival’s Indigenous Community Media Fund. The project titled Bi-National Project of the Great Awá Family supported local Indigenous radio stations to build capacity of Awá communities in audiovisual and radio production to contribute to the strengthening of cultural identity and the defense of the rights of Mother Earth. The video titled "Our Great House" speaks about the importance of protecting and defending Awá ancestral territory and its relationship to the Awá cultural identity.

Radio Tosepan Limakxtum is a community radio station that broadcasts from the northeastern Sierra and Puebla, Mexico, and is a 2020 Indigenous Community Media Fund grant partner. Their project aims to revitalize the language and culture of the Náhuatl Peoples, delivering training in audiovisual content and radio programs about stewarding their territory, protecting their natural resources, and creating sustainable livelihoods for their communities. Their video, "Protección de Lugares Ancestrales (Protection of Ancestral Places)", reflects on the importance of protecting the sacred ancestral territory in Náhuatl and safeguarding lands from development and resource extraction.